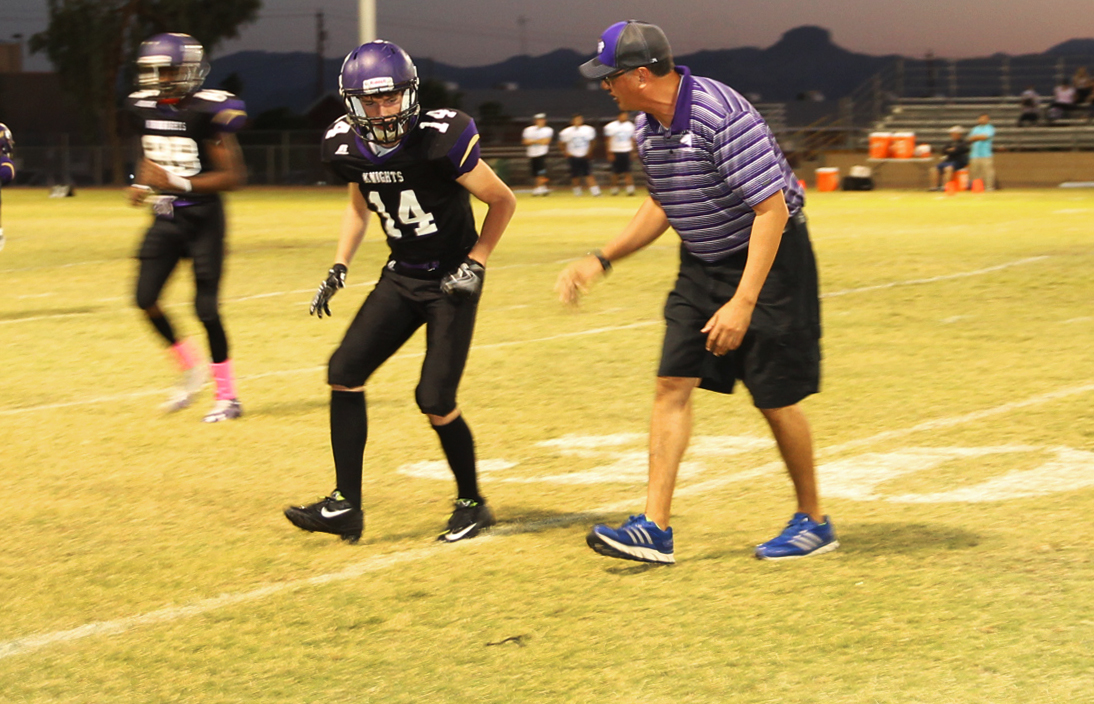 There are seven volunteer football coaches at Lake Havasu High School who are true role models for the school’s young athletes. The men play a major role in portraying life lessons well beyond the traditional classroom. 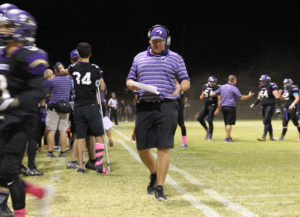 “It’s tremendous because of the amount of time they put in,” said Karl Thompson, LHHS head football coach. “It’s a five- to seven-day-a-week job – beyond normal work time. The quality people who volunteer makes my job easier … it’s not about winning football games. It’s about preparing them for the real world. It’s about commitment and being part of a team.”

As a former coach, Scott Becker, LHHS principal, said “There’s lots of life lessons for the students as they are coached by these role models.”

“The biggest lesson is sacrificing time away from family and friends,” Becker said. “They sacrifice part of Fall Break and they sacrifice again at Christmas. It’s a big piece of learning outside the classroom.”

Each is required to be certified in coaching, pass a background check, pass a test pertaining to the fundamentals of coaching, possess a concussion certificate, and be knowledgeable in heat acclimation protocol, Thompson said.

“I love to coach,” Kalauli said. “I love to be able to help shape youth’s lives so they don’t come see me, to help them keep from the court system. I want the experience to be positive. I want them to learn to be good men, husbands, and fathers. I think you can get a lot further from a positive place.” 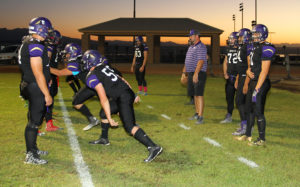 Kalauli has been volunteer coaching for three years with LHHS and currently leads the varsity team’s defensive backs. During his own high school years, Kalauli played quarterback, defense, and safety. And he played a year in college, he said.

The volunteer group assists with both varsity and junior varsity football. The offseason includes summer workouts, strength and conditioning sessions, 7-on-7 passing league, offensive and defensive position coaching, a weeklong minicamp, and overall defensive and offensive schemes when it comes to the playbook. The tasks begin at about five hours each week but can reach as many as 20 hours.

“I try to be fair, a player’s coach,” said Bailey, owner of Havasu Garage Screens. “I want to help them become young men in the community and assets to us.”

Bailey has been volunteer coaching for two years at LHHS. He coaches defensive line players for both varsity and junior varsity. Back in the day, he played offensive guard and defensive tackle in high school but a knee injury dashed his hope of college ball.

During the 10-game regular season, the commitment increases to easily 20 hours weekly. Playoff games can extend the season to as many as 14 games if LHHS is vying for the state championship. The team and volunteers have traveled about 2,000 miles to play at away games this season. 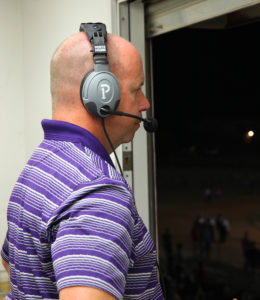 “It’s very satisfying when you show them something during practice and that translates into the game,” Harrold said. “Having relationships with these young men is very rewarding. I have a love for football and for the players … one of the first things I try to do is emulate positive behavior and be an example when it comes to hard work and perseverance.”

Harrold became involved with coaching football in Havasu 10 years ago when his son Jacob began playing. Now, he is 17 years old, and is in his third year as a Knights varsity player. Harrold has been volunteer coaching with LHHS for four years and is the junior varsity defensive coordinator. During varsity games, he acts as a spotter and spends his time in the field’s booth. In high school, Harrold was a linebacker.

The extra hours can be challenging, especially when it comes to traveling to games as far away as Phoenix. However, it really is a family ordeal when it comes to Harrold’s volunteer efforts. Wife Jennifer Harrold is the team’s water girl, and the only football mom you’ll see on the field’s sidelines at game time. She said she really enjoys the tasks.

“I have to give Chief (Dan) Doyle and Captain (Doug)Whitaker a lot of credit,” Harrold said of his administrators at the police department. “They allow me to adjust my schedule with early starts.” 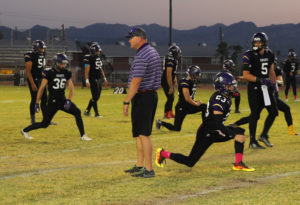 This year, 65 players are in the hands of the LHHS coaches and the volunteer coaches. Last year, there were 90 players. Friday is Senior Night and the final week of regular season. The team stands at 3-6. The LHHS Knights are set to take on the Agua Fria Owls (2-7), of Avondale, at 7 p.m., at the LHHS football field. 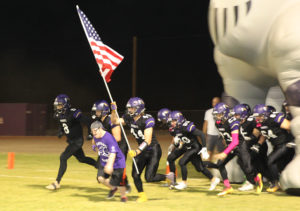 Varsity players run out onto the field Friday evening before the start of the LHHS football game. Jillian Danielson/RiverScene