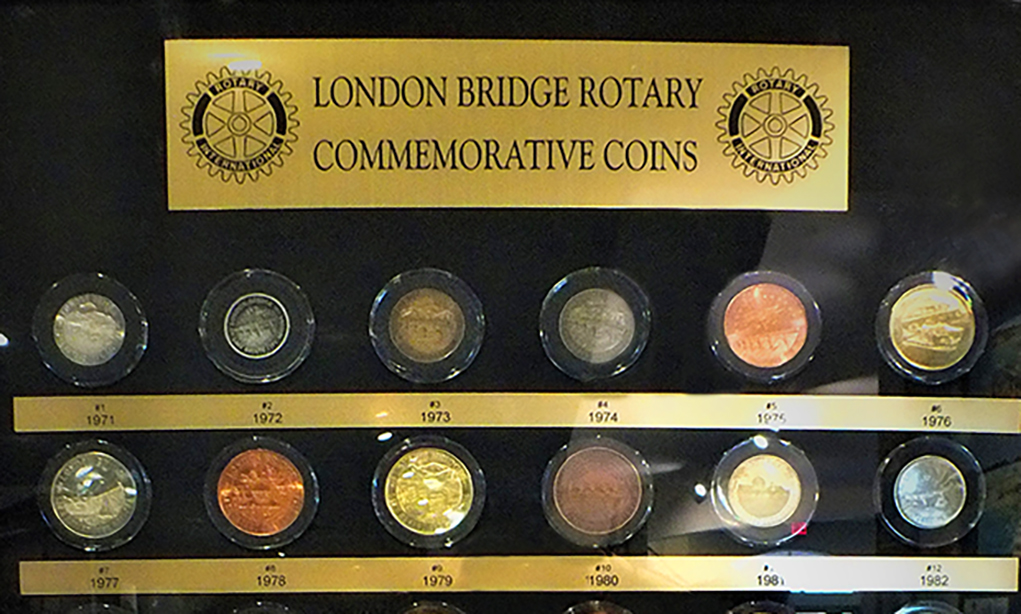 When the London Bridge was dedicated Oct. 10,1971, the Lake Havasu Rotary Club wanted to commemorate the historical event and give community members a keepsake to remember the event for future times and generations. The organization came up with the 1st London Bridge Commemorative Coin.

“The group attempted to sell the coin at the event; however, sales weren’t well. So the following year, Rotarians sold all of the previous year’s coins plus the 1972 2nd year editions. From that October and for every October thereon, a local tradition was born.” explained  member since 1978 and current Coin Chairman, Gary Hettick.

The first Rotary Coin was originally named the “Havasu Dollar.” A Havasu Dollar owner could use the coin as a trade dollar to put toward purchases at local businesses. This was a a way to promote local business as well as the Rotary Club. Now, the coin is a yearly novelty kept by collectors and history lovers alike as they represent the  city.

Every coin of the year has a theme. This year, the theme is: Light Houses on the Lake to honor the lighthouse replicas that line the lake shores. The design of the coin has always remained local. 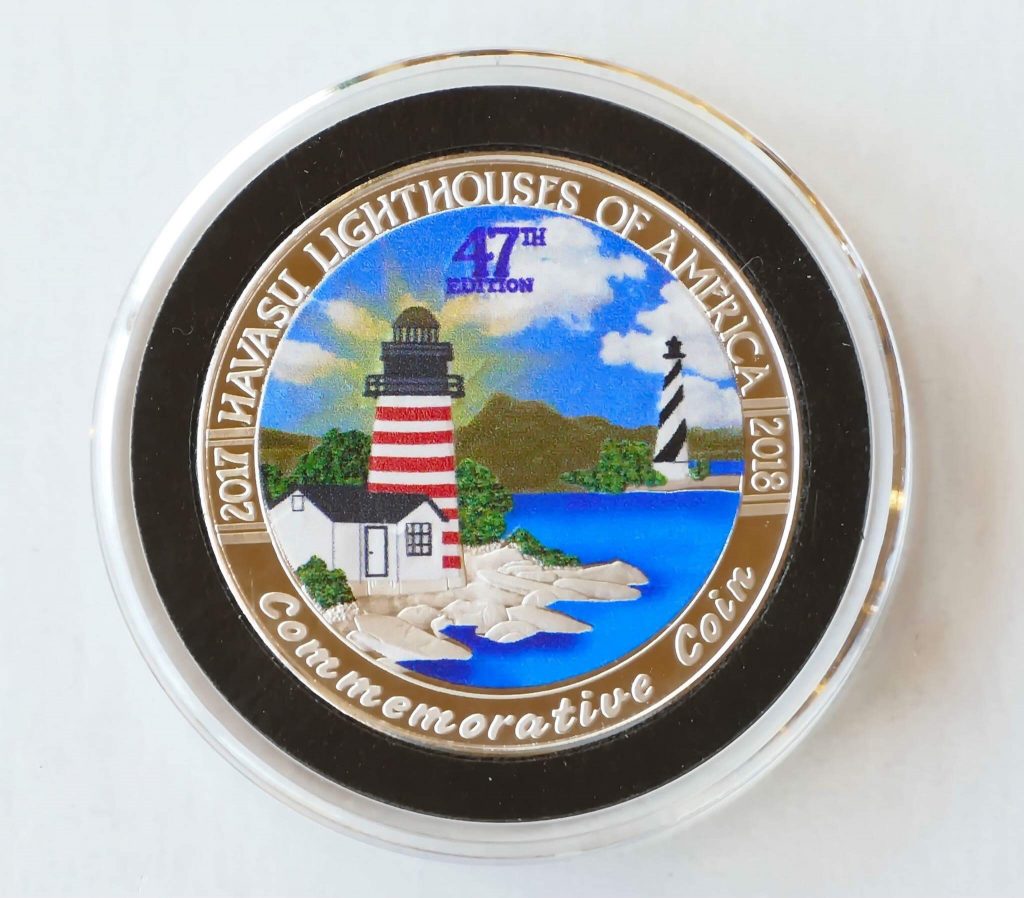 The Back of the coin shows 2018’s theme: Havasu Lighthouses of America

The original artists of the Rotary Coins were Art and Sue Tuberman. For the last 22 years, however, the art of the coins have been designed by Heather Kaino. For her diligent work on the notable designs of each piece, Kaino is given a custom set of the coins for her keeping in addition to a donation toward her own charity, Heather’s Closet. Heather’s closet is a nonprofit that assists school-aged children with clothes for school. After the design is approved by the London Bridge Rotary Club, the designs are sent to a coin minting company in Ohio for manufacturing.

The profits of the coins parallel the club’s main purpose: to give back to the community. Of the approximate $40,000 per year of coin revenue, all funds raised by the coins are given to local charities.

The most notable of these local causes is the direct development of Rotary Park. In 1988, the former “Mudshark Beach” was being redesigned and transformed into  a local area for recreation, a connection to nature, and a lakeside hot spot. The townsfolk were being asked to submit name ideas to the city. The London Bridge Rotary Club saw this as an opportunity to make a truly lasting difference in the community. 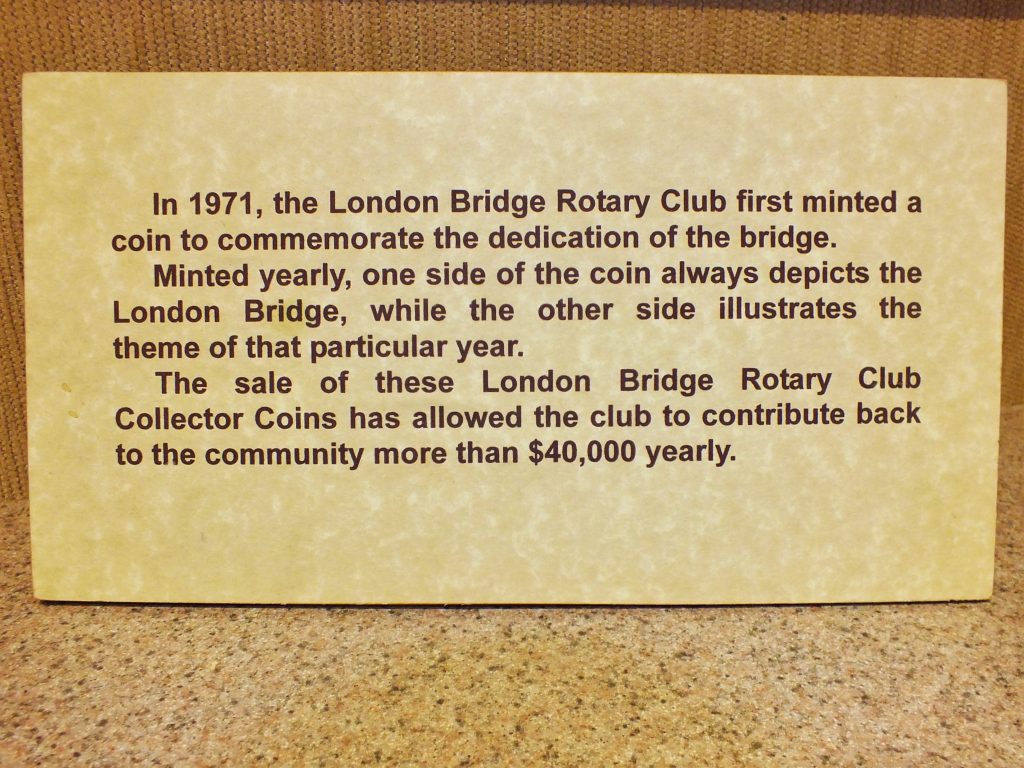 “We had been selling the coins for years and some of the members decided to make a proposal.” shared Hettick.

The group went to the city and offered $100,000 to the development of the park if it was guaranteed that the money stay within park development and maintenance. The city officials accepted the offer and even added the name “Rotary Park” as gratitude for the donation. Over the span of 10 years, $10,000 per year of coin sales went directly into the park to make it a special place for generations to enjoy.

In addition to Rotary Park, the funds of annual Commemorative Coin sales have sponsored the youth water activity awareness program and Kinderswim. For two weeks every school year, at no charge to parents, the Aquatic Center hosts weekly courses on  swimming, floating, and water safety for kindergartners. Lake Havasu City has proudly never experienced any pool-related youth drownings and that may be thanks to this program. For the last nine years, the London Bridge Rotary Club has donated $7,500 to the program from coin sales. 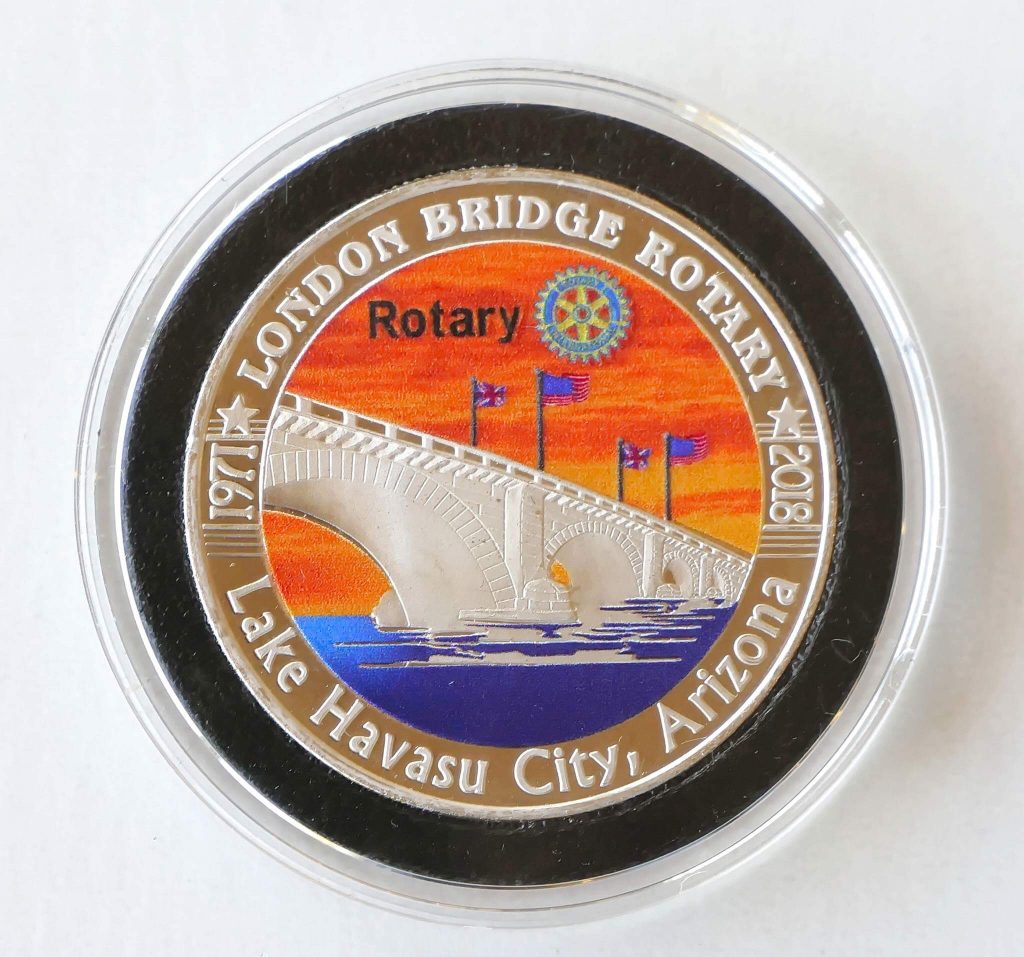 The Front of the 47th Annual Rotary coin shows the London Bridge and the Arizona sunset. Grace Usher/RiverScene

The annual London Bridge Commemorative Coin is sold during events throughout the year including London Bridge Days Parade, Balloon Fest and Winter Fest. The coin comes in standard (antiqued nickel and silver), silver, silver with gold overlay, and colorized. Pricing ranges from $10-$160 for various coins.

“Rotary Coins from all previous years to the 1971 commencement can be seen on display here” explained voluntter docent, Butch Wood of Lake Havasu Museum of History.

This weekend at the London Bridge Days Parade, keep an eye out for a Rotarian volunteer in the blue and yellow vest with he 2017/2018 coin and coins of past years. Pick out your favorite and know that the money in Lake Havasu and go home with a treasure to commemorate the historical London Bridge, the London Bridge Rotary and the Lake Havasu City.

For further information or to contact the London Bridge Rotary Club, visit their Facebook page at https://www.facebook.com/groups/296721562266/ 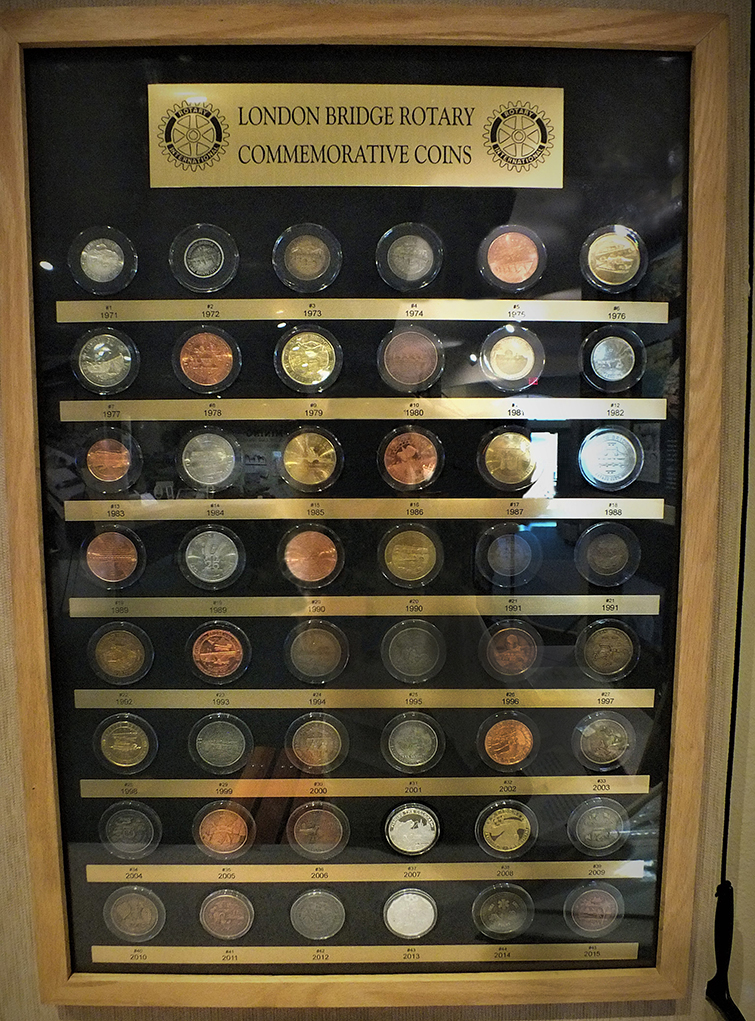 Rotary coins are on display at the Lake Havasu Museum of History. Grace Usher/RiverScene

One Response to “The London Bridge Rotary Club Commemorative Coin: A Piece of Local History”