The London-Havasu Connection Is Strong 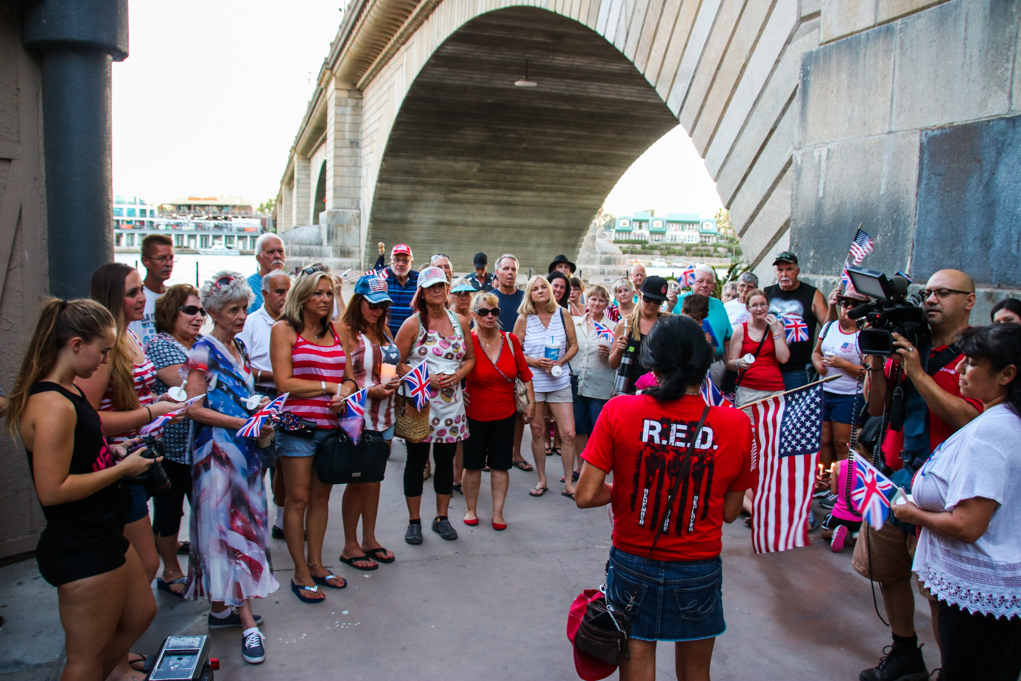 At least 50 citizens took part Friday evening beneath the London Bridge for a candlelight vigil in Lake Havasu City to show ongoing support for London, England, in the wake of the June 3 terrorist attack on their own London Bridge. 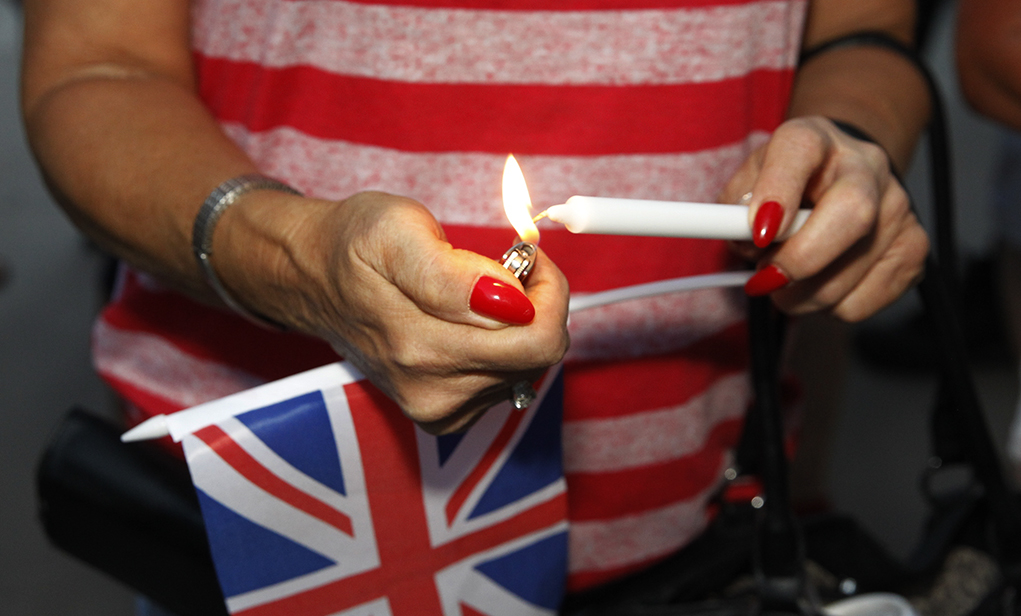 A candle is lit in honor of the London Attack victims. Jillian Danielson/RiverScene

One supporter, Tina Brodie, a local Realtor with Grand Island Realty, lives nearby on Havasu’s Island and travels daily over London Bridge. At the time, the tragedy was announced through a news alert on her cell phone, she had to do a double-take.

“That really frightened me,” Brodie said. “I kept hearing London Bridge, London Bridge. I live on the Island. I was thinking, do I need a boat to get off this Island?”

Brodie was at London Bridge in Havasu on Friday to show support for the eight killed in the attacks, and for the dozens more still recovering from their injuries. 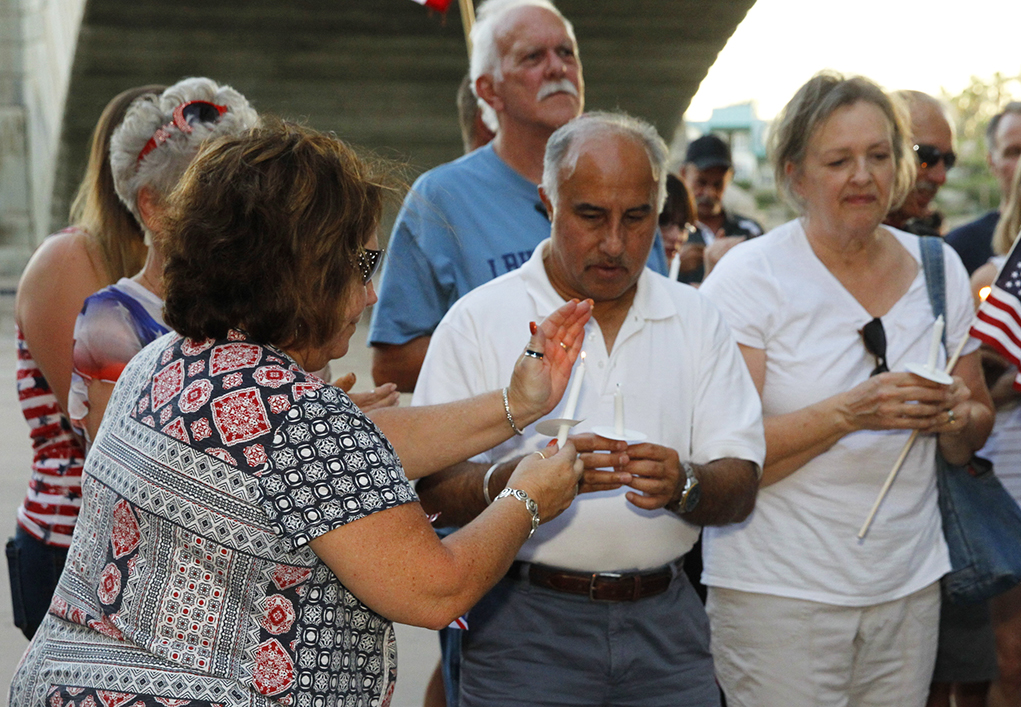 People in attendance at the ceremony under the Lake Havasu London Bridge attempt to light candles in breezy conditions Friday evening. Jillian Danielson/RiverScene

Among the handful of candlelight-vigil organizers, Amanda Larson, of Lake Havasu Social Group, said the group organized the event for Havasu earlier in the week at an initial showing of support immediately after the attacks.

“It’s for the community to come together as a whole to show love and compassion for those affected by what happened,” Larson said. “We have a pretty good turnout.”

The terrorist attack occurred last week on British soil when a passenger van drove into an unsuspecting crowd on London Bridge in London, England. The attack cost eight individuals their lives. Dozens more were injured in the tragedy. Three individuals involved in the attack were killed by police, bringing the incident’s death toll to 11. 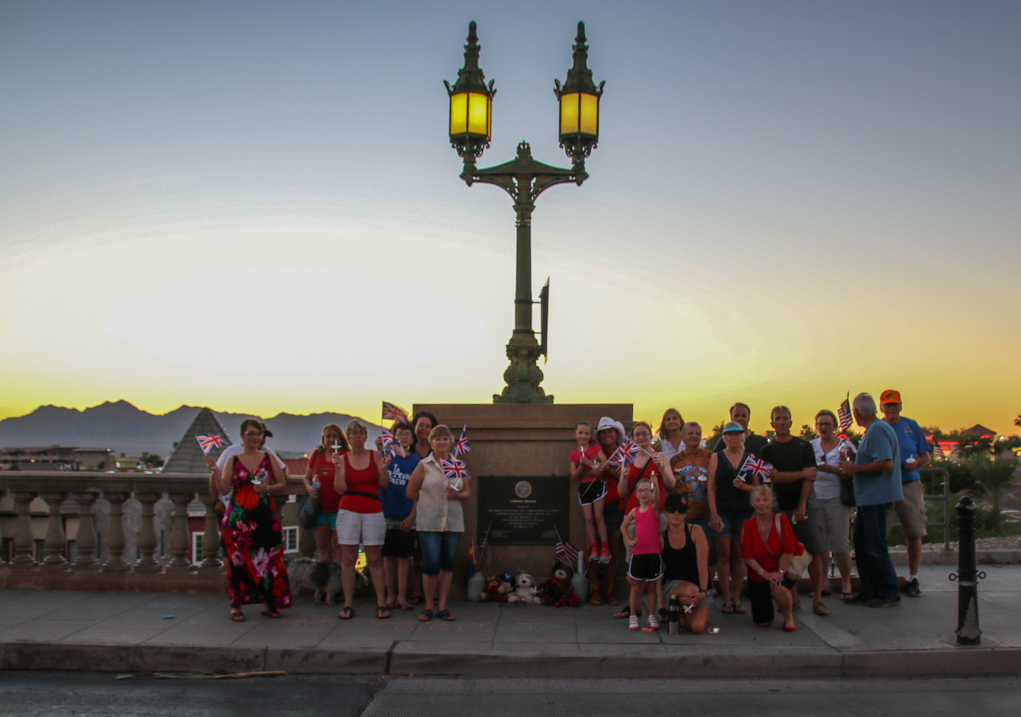 A group of supporters stand next to a memorial on the Lake Havasu London Bridge Friday evening. Rick Powell/RiverScene

Eddie Ebach, a longtime Havasu resident, also turned out Friday at sundown for the candlelight vigil.

Ebach claimed a small British keepsake flag at the event, one of only a dozen or so handed out at the vigil. They were held high in the mix with the mini U.S. flags and patriotic-themed bracelets, which also were given to those in attendance.

Ebach said he and his wife regularly walk Bridgewater Channel together. Both enjoy the views and the presence of Havasu’s London Bridge. 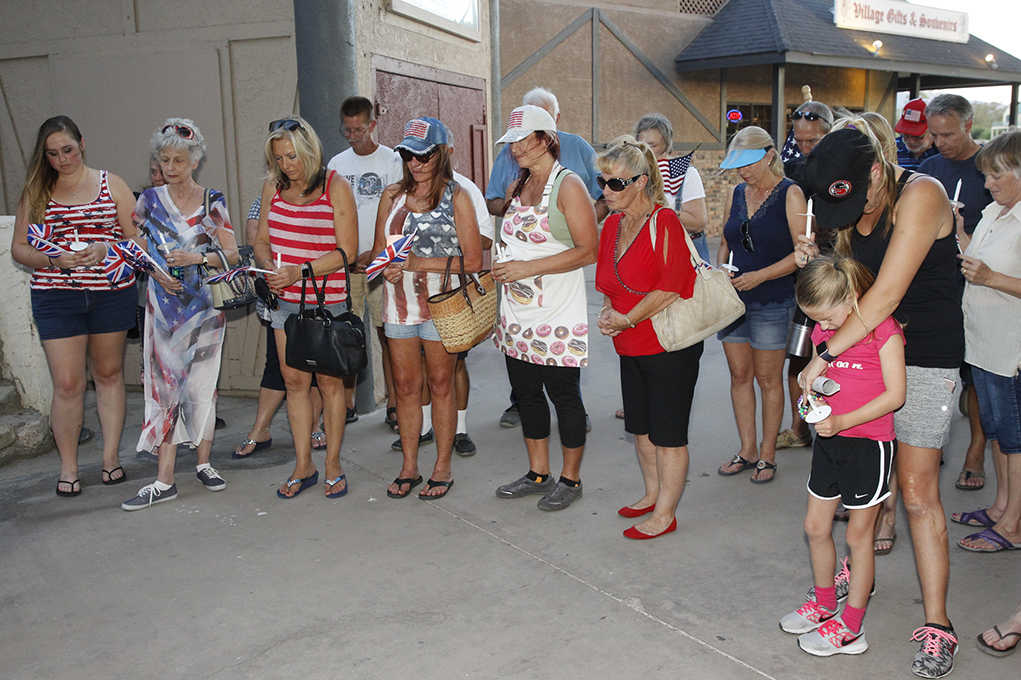 People stand for a moment of silence during the small ceremony under the Lake Havasu London Bridge Friday. Jillian Danielson/RiverScene

Although gusty winds in the Channel prevented the candles from being properly lit, event spokeswoman Lorinda Moore said they were lit in spirit. Moore led the 50 individuals in a prayer at dusk. It was followed by a moment of silence to honor those lives lost in the London attack.

Individuals from the group were invited to join Moore for a memorial walk over Havasu’s London Bridge – carrying both British and U.S. flags.

Many who turned out for the event wore patriotic clothing, hats, sunglasses and handbags. Individuals of all ages were included.

Lake Havasu Social Group, who hosted the event, is a local Facebook group with 2,500 members. Some of the members meet at local eateries for a weekly outing. The group is open to the public. 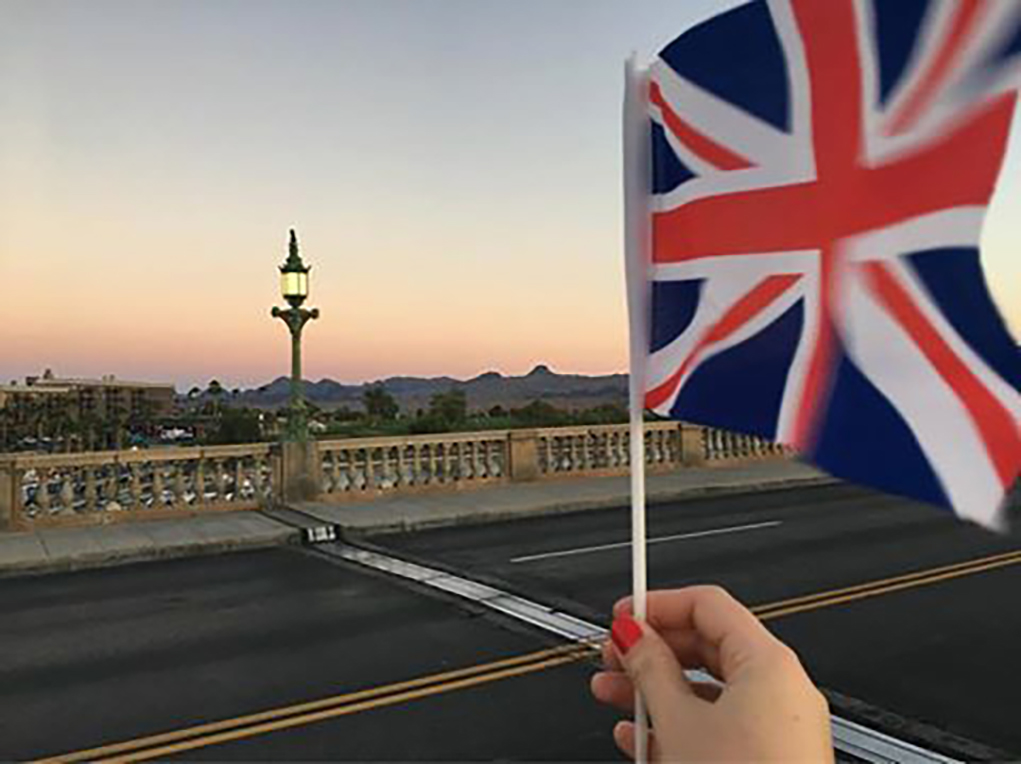 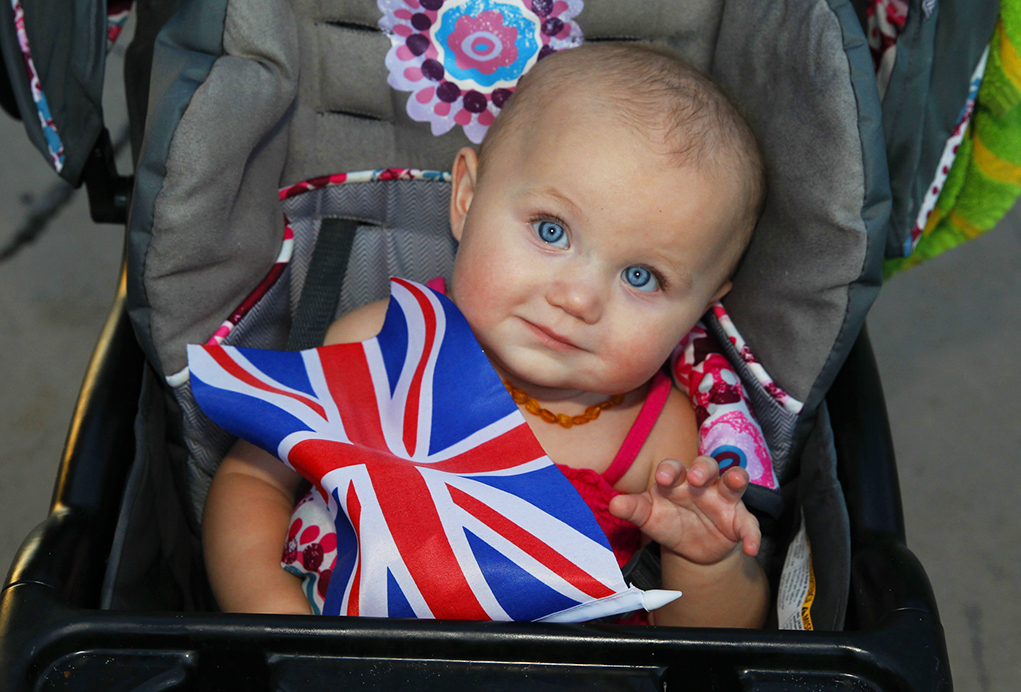 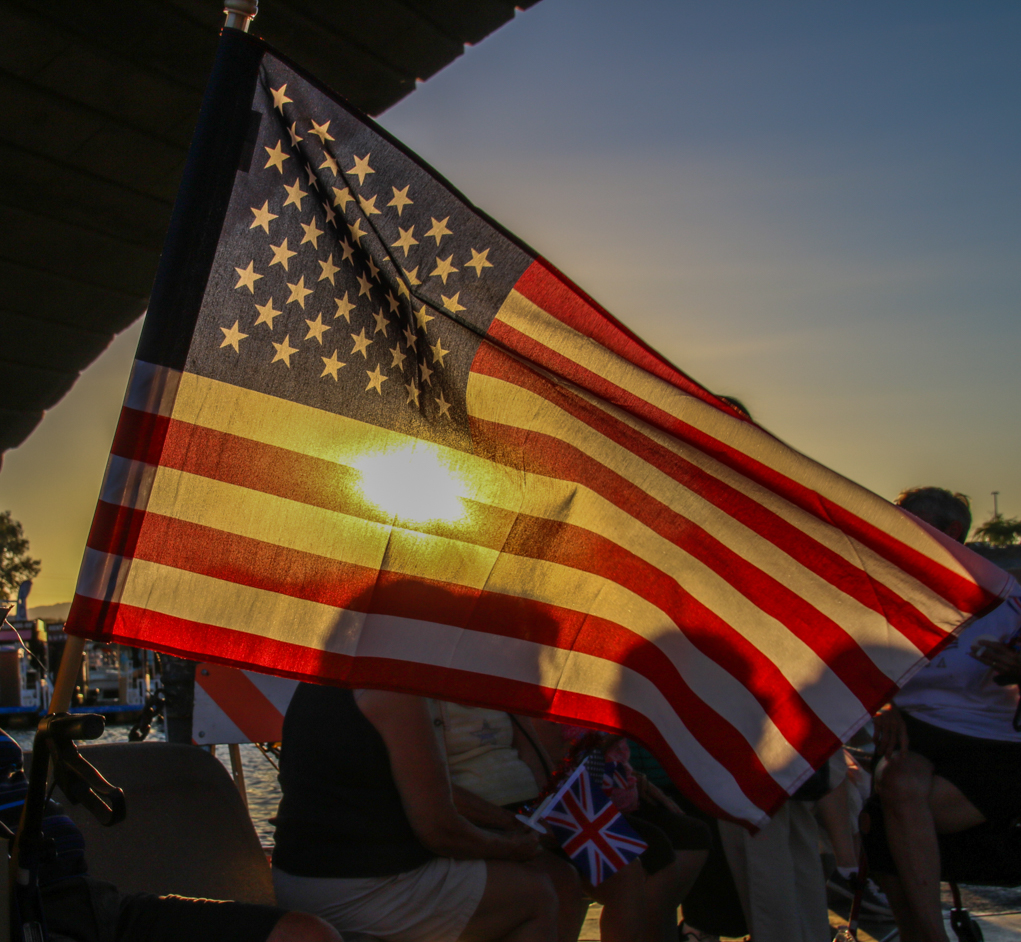 A flag is flown at sunset Friday evening under the Lake Havasu London Bridge. Rick Powell/RiverScene 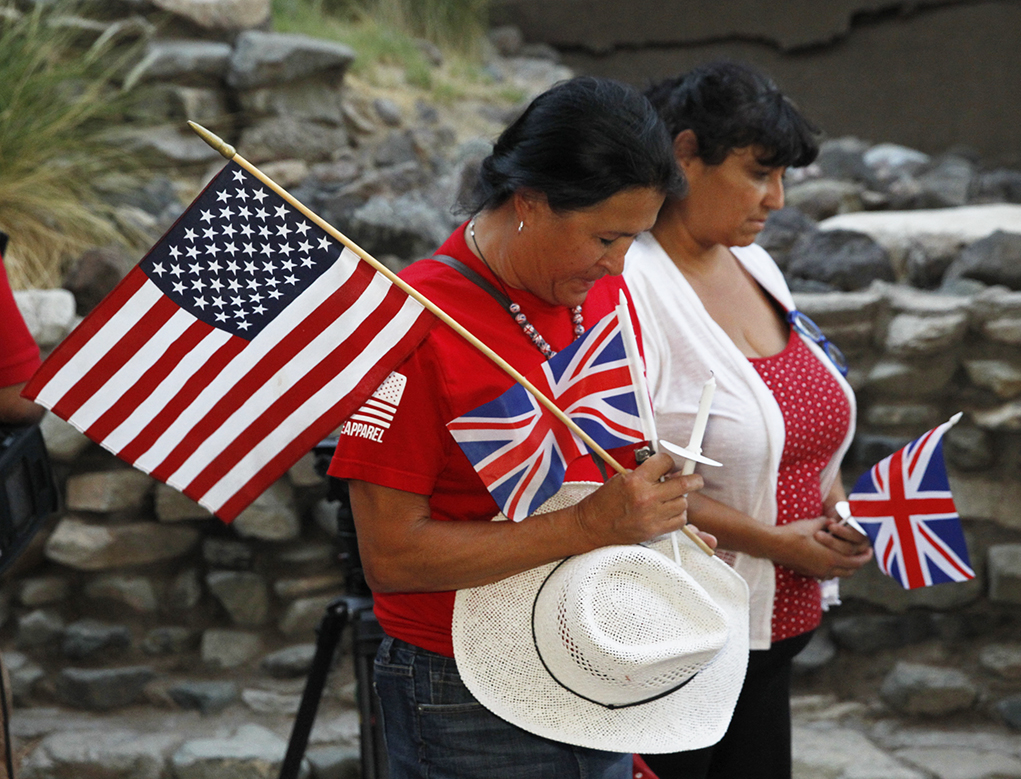 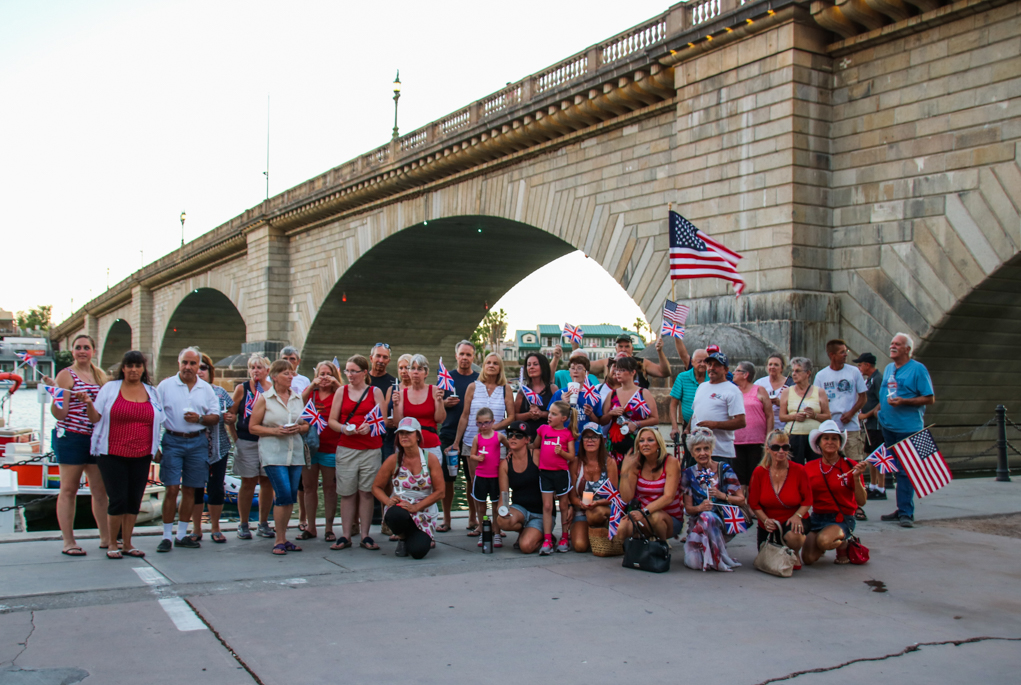 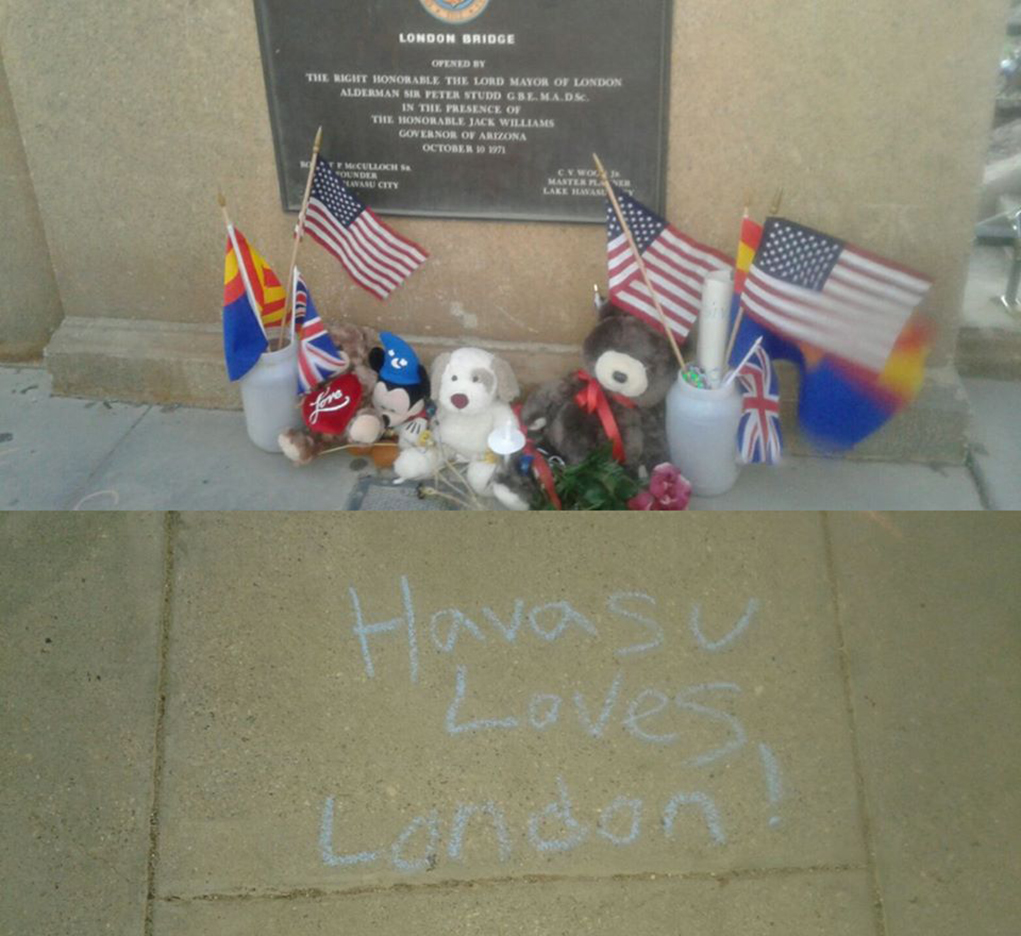