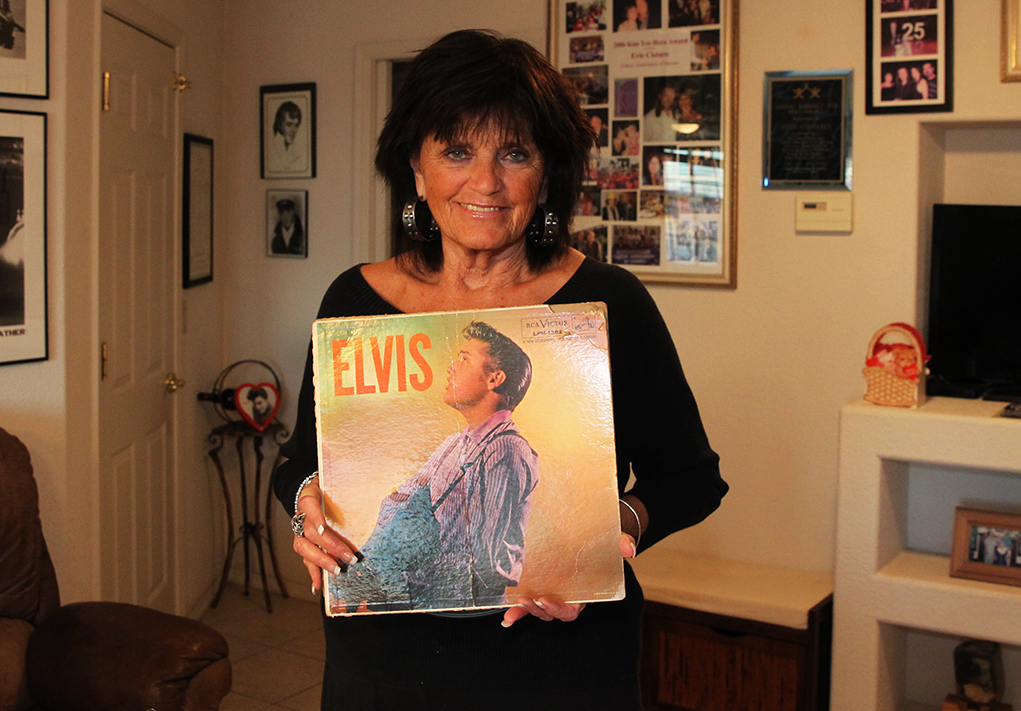 An avid collector of old 45s, 8tracks and cassettes through the years, Evie Cistaro, 70, of Lake Havasu City, admits she has been ogling Elvis Presley for about 60 years.

Her extensive collection of Elvis memorabilia can’t hide her adoration, even if much of it was bestowed upon her following Elvis’ death in 1977 by her friends and family.

A few Elvis 8 tracks sit on display in her home. Jillian Danielson/RiverScene

With a love of many musicians, Cistaro says she never set out to follow Elvis or accumulate such a grand collection. It just panned out that way.

“Elvis is just so good,” she said. “I just really love his music.”

Growing up in Boston, Mass., put Cistaro in a position to see many great musicians. At 12 years old, she saw Wayne Newton. At 14 years old, she found herself onstage doing the infamous twist with Chubby Checker. She was in the second row during a Ray Charles concert, and also told tales of seeing the Temptations and the Supremes.

Cistaro has been to three Elvis shows. The first was in 1971, when he appeared at the Boston Gardens. And, twice more at the Elvis Summer Festival concerts, in Las Vegas, Nev., during 1974 and in 1975.

“It was the only time he ever was in Boston,” Cistaro said.

“I was a zillion feet away but it was like he was right in front of me.” 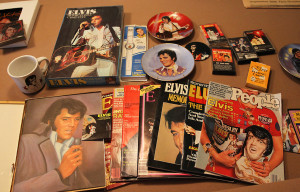 Evie displays some of her Elvis memorabilia she has colloected over the years including cassette tapes, magazines, mugs, and watches. Jillian Danielson/RiverScene

In 1975, a front row table at the show provided Cistaro the opportunity to sneak in a cassette tape player by way of a deep, narrow handbag. Equipped with a small microphone, she successfully recorded the whole show. It’s a treasure among her collection.

The reason for her longtime, undying love hinged upon his appearance and the gospel quality of his voice.

“I loved his looks, obviously,” she said. “But when he sang he had a gospel voice, too. You sat in the audience and you were like – whoa – this is awesome.”

It was at the tender age of 10 or 11 when Cistaro first noticed Elvis’ music on the airwaves.

“People played the radio back then,” she said. “People don’t play the radio for entertainment like they did back then.”

Songs like “I Did It My Way,” “Are You Lonesome Tonight,” “Love Me Tender” and “How Great Thou Art” are among her favorites, she said.

Cistaro marks Elvis’ best show as his Comeback Tour in 1968.

“He looked dynamite wearing the black leather jacket and shirt,” she said. “He came back and his concerts were sold out. You couldn’t get into them.”

With Cistaro’s and Elvis’ birthdays just days apart, she always loved that he was a fellow Capricorn. Furthermore, she married her husband Joe the same year Elvis and Priscilla married.

She and Joe had their first child the same year Elvis and Priscilla welcomed theirs. 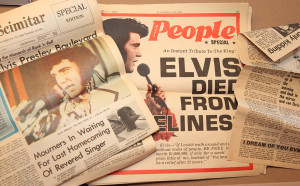 A collection of newspapers from Elvis’s death are displayed in Evie’s home. Jillian Danielson/RiverScene

In 1977, Elvis died. At that time, a nation mourned the King of Rock n’ Roll. Cistaro was among those who were devastated.

“I was home, it was my day off,” she said. “It was like the saddest thing. It wasn’t like when JFK died or anything, but it was just the saddest moment. Like, I know exactly where I was that day when Elvis died.”

At home on that day, a coworker from the beauty shop called with the news. One of Cistaro’s beauty-salon clients had phoned the salon with condolences because she, too, knew of Cistaro’s love of Elvis. The shop-owner called Cistaro. While standing over a macramé project, she was informed that the King was dead.

In the 1980s, Cistaro attended a L’Oreal Hair Show in Phoenix. By luck, she won a drawing that placed her at the lunch table with Priscilla Presley.

“She was so tiny, just so petite,” she said. “I couldn’t believe her hands were so small. But, we couldn’t ask her any questions about Elvis. It was all supposed to be about L’Oreal.”

Cistaro displayed great restraint during the lunch, biting her tongue about the King, she said. 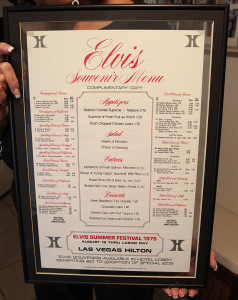 Evie framed a menu from the Elvis concert at the Hilton. Jillian Danielson/RiverScene

Nowadays, Cistaro’s husband of 49 years looks back on his wife’s obsession, on the times he refused to accompany her to the Elvis shows, and wishes he would’ve changed his own tune.

With laughter, the couple rehashed an old memory of a conflict centering on the airing of Elvis’ “Aloha from Hawaii” in 1973. The show aired at the same time as a Major League Baseball playoff game. With a single television in their home, Joe won the battle that day.