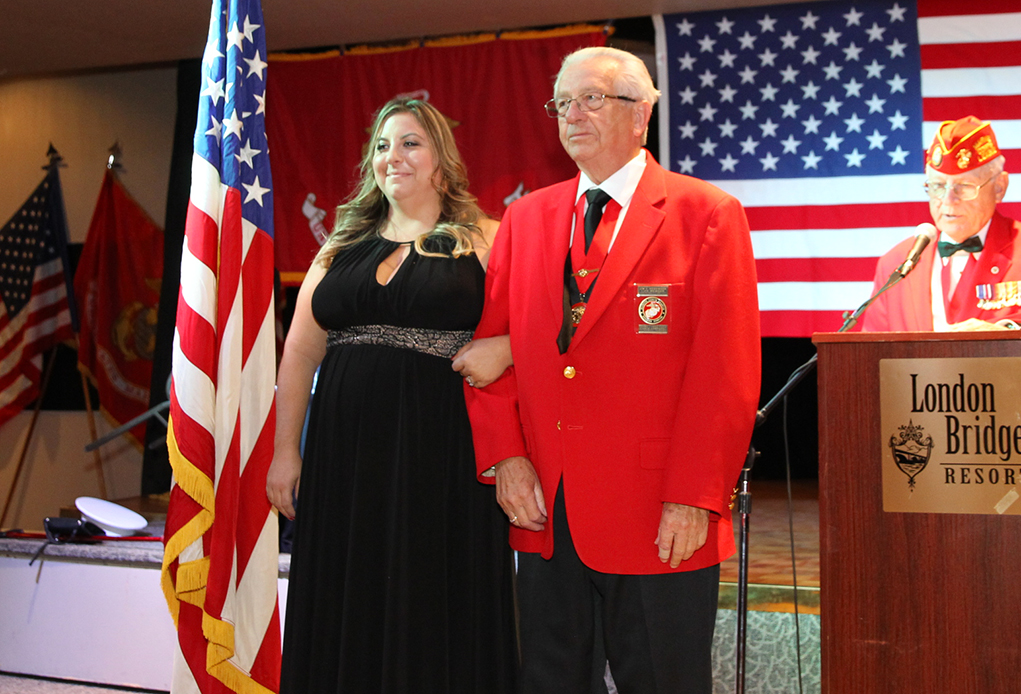 The U.S. Marine Corps Ball’s 241st celebration in Lake Havasu City on Thursday was dedicated to the wife of a Marine who was killed in action July 7, 2011, while serving in Afghanistan.

T.J. Dudley, USMC, was within weeks of completing his sixth deployment when he was killed. At that time, best friend and fellow Marine Joel Giuliano escorted him home.

“Most often, the guys will make a pact with each other that if something were to go wrong, the other would take care of their family,” said Commandant Frank Blaine, Lake Havasu City Marine Corps League Detachment 757, while narrating the ceremony.

In the case of Dudley and Giuliano, what happened was just that.

“His best friend brought him home, and that is when he first met Mary.” said Jimmy Kessinger, of Havasu’s Marine Corps League, and T.J. Dudley’s father-in-law.

Mary Louise Dudley, who is Kessinger’s daughter, lives in Jacksonville, N.C., but attended the Ball in Havasu without knowledge of the Ball being dedicated in her honor. It was there her recent engagement to Giuliano was announced.

“I just think it should be about them, not me,” Mary Louise said of the dedication. 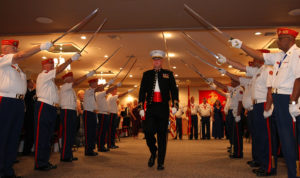 On another note, the Ball’s guest speaker USMC Major Thomas M. Keech, who currently is stationed in Hawaii, also was a close friend of the Dudley’s. During his speech, Keech spoke fondly of T.J.’s wide smile, sense of humor, and directness.

“There was a picture at the memorial of T.J. with him in his flight helmet, smoking a cigar, with his flight suit on,” Keech said.

The flight was celebratory on that day, as it was Keech’s final flight over the Mediterranean Sea in a CH-46 helicopter before being re-stationed. In the end, the photo became quite popular among T.J. friends and family but to Keech, it always will remind him of the mild mischief he and his crew stirred up that day.

Organizers said 170 tickets were sold. Two of those tickets belonged to Erin and Heather Page, of Monroe, N.J. The couple were vacationing in Havasu when Heather learned of the Ball, hosted in the hotel in which they were staying – London Bridge Resort.

“We had never heard of Lake Havasu City before and we had never been here,” said Heather. 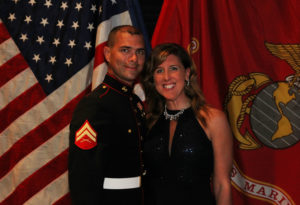 The Page’s time-share search turned up Havasu. Another search of what to do while in town turned up the Marine Corps Ball. Husband Erin is a Marine but during their 13 years of marriage, they’d never attended a Ball.

“We’ve had the best vacation ever, this is a wonderful town,” Heather said. “This was meant to be. It’s near and dear to his heart with the history of his service. This is just so special. We’ve had an amazing week in Lake Havasu.”

During the Ball, the Marine Corps League incorporated the tradition of the oldest and youngest marine when it comes to the cake. The first slice was served to guest speaker Keech. The second was served to the oldest Marine Gene Burns, 87, who ceremoniously passed it to the youngest Marine Patrick Baughman, 29. The passing signifies the passing of tradition, knowledge and honor, from one generation to the next.

The black-tie dinner affair wrapped up with live music, dancing and celebrating the occasion.

Feature photo: Mary Louise Dudley stands with her dad, Jimmy Kissinger at the Marine Corps Ball Thursday evening as it was announced the Ball was dedicated to her. Jillian Danielson/RiverScene 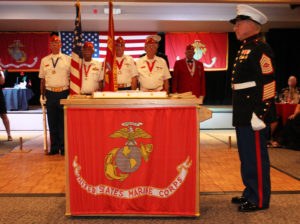 The Marine Corps. birthday cake sits at the front of the room Thursday evening. Jillian Danielson/RiverScene 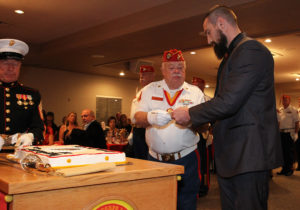 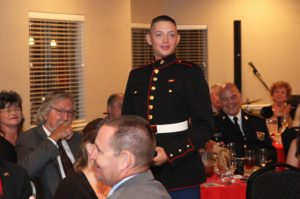 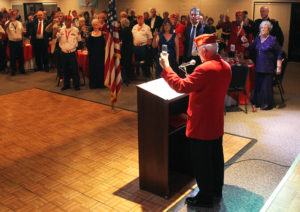 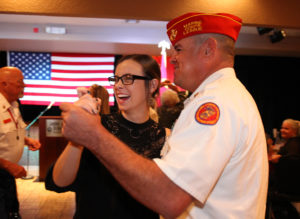 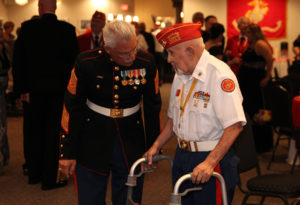 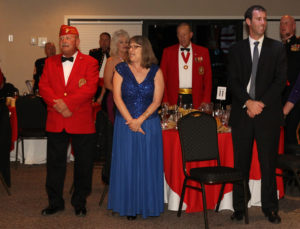 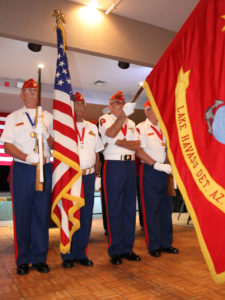 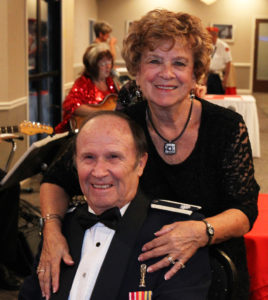