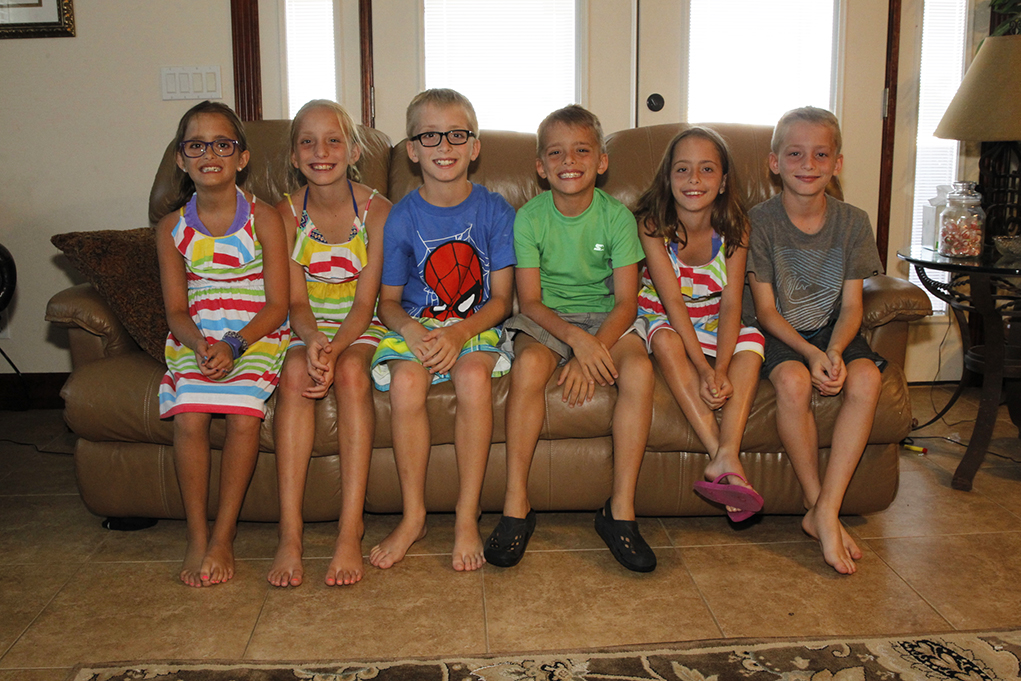 The six youngsters, who are of Chandler, are in Havasu to celebrate their 10th birthday with Bill and Laura Masche, who are their grandparents. The sextuplets were born to Bryan and Jenny on June 11, 2007. 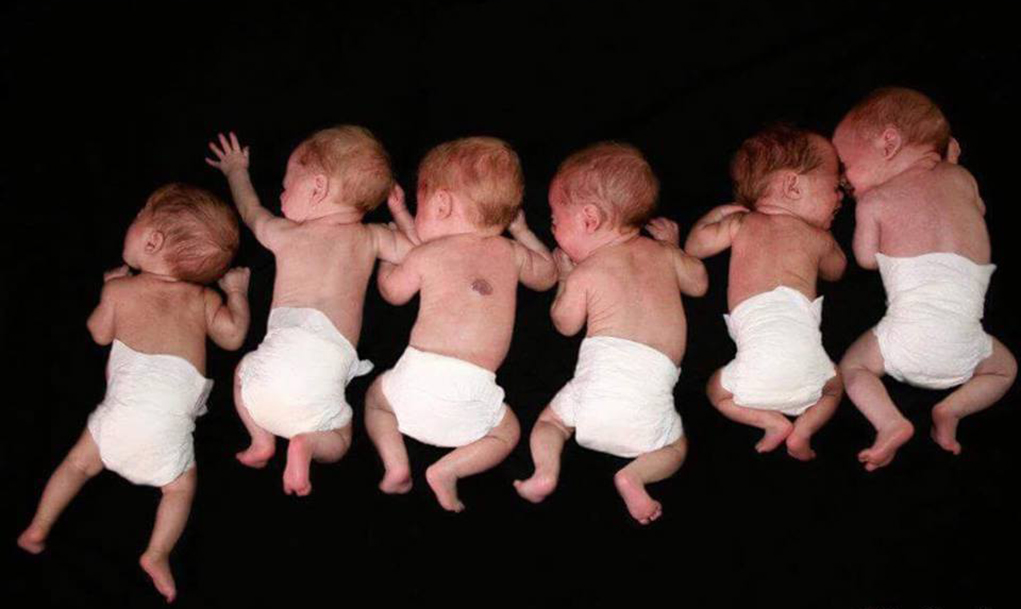 The Masche Sextuplets as newborns in 2007. Jillian Danielson/RiverScene

“What’s really interesting, from the beginning the traits we saw with them, even when tiny babies, have stayed with them as they’ve grown into little kids,” said Laura Masche. “I love the fact that being sextuplets, they are each their own individuals.”

In all, there are three girls and three boys. In birth order, there is Savannah, Bailey, Grant, Cole, Molli and Blake.

Collectively, the siblings enjoy each other’s company during certain activities. Other times, they prefer alone time. All claim to be huge fans of Major League Baseball team Arizona Diamondbacks. They sometimes attend games at Chase Field in Phoenix – always with hotdogs included. And, they’re excited to share a birthday with team mascot “Baxter,” they said.

When it comes to birthdays, they said sharing attention can be challenging but there always is plenty of cake.

“All of you get presents, and you can play together with them,” said Savannah Masche. “And, when we have cake there is always so much left over.”

“I like to do my homework alone, it’s always loud downstairs,” she said.

Savannah said she hopes to be an orthodontist when she grows up.

“It’s hard sharing a birthday because all the attention is focused on all of us instead of just one of us,” said Bailey Masche. “I have to share the attention.”

But, it’s not all bad all of the time with five other brothers and sisters in the mix.

“I like to watch movies with them because all of us are calm,” she said. “And, afterwards we all just talk about our favorite parts.”

Bailey’s most enjoys spending alone time with her dad.

“When I grow up I want to be some sort of a doctor, or a nurse practitioner like my dad, or a physician assistant like my mom,” she said.

Grant Masche said he hopes to be a chef one day. For now, he is perfectly content playing with his siblings. Sometimes for sport, and always at their own expense.

“I love to shoot them with my Nerf guns,” he said. “It’s enjoyable to watch your brothers and sisters get crushed.”

Much in cahoots with his brother Grant, the duo works together as pranksters when it comes to the others.

“I like to turn off all the lights upstairs and scare them with Savannah’s American Girl doll,” Cole Masche said.

Cole said he aspires to be an orthopedic surgeon in the U.S. Marines or the U.S. Air Force.

Molli said she most enjoys swimming when it comes to activities including all five of her siblings. In turn, she said spending alone time with her mother and with her puppy dogs.

“I love my puppy dogs, they’re so cute,” Molli Masche said. “I’m the one who feeds them every morning before school.”

The feedings are of her own accord despite the chore-chart that keeps the household working like a well-oiled machine.

Molli said she wants to be a veterinarian when she grows up.

“My favorite thing to do with my brothers in to get on the Xbox,” Blake Masche said. “I have a few favorite games: ‘Need for Speed Rivals,’ ‘Trove,’ and ‘Roblox.’”

Blake said there are ups and downs to being a sextuplet on your birthday.

“There are both goods and bads,” Blake said. “The bads are that you don’t get as much cake, and the goods are there is always someone who has the same birthday as you, and you can go ask them, ‘hey, do you want to go do something?’”

Blake said he hopes to one day be a National Football League quarterback, a biomedical engineer, or an engineer in the U.S. Air Force. His favorite NFL team is the Arizona Cardinals.

The sextuplets interests are varied and also include playing soccer, football, basketball, softball or cheerleading. During the schoolyear, the siblings are paired boy-girl within the classrooms. That means, two are placed in each class, and boy-girl so they won’t ever fight over friends, the sextuplets explained. They will begin fourth grade in their Chandler-based school later this year.

Grandmother Laura Masche said each has maintained their original personality traits from when they were babies. 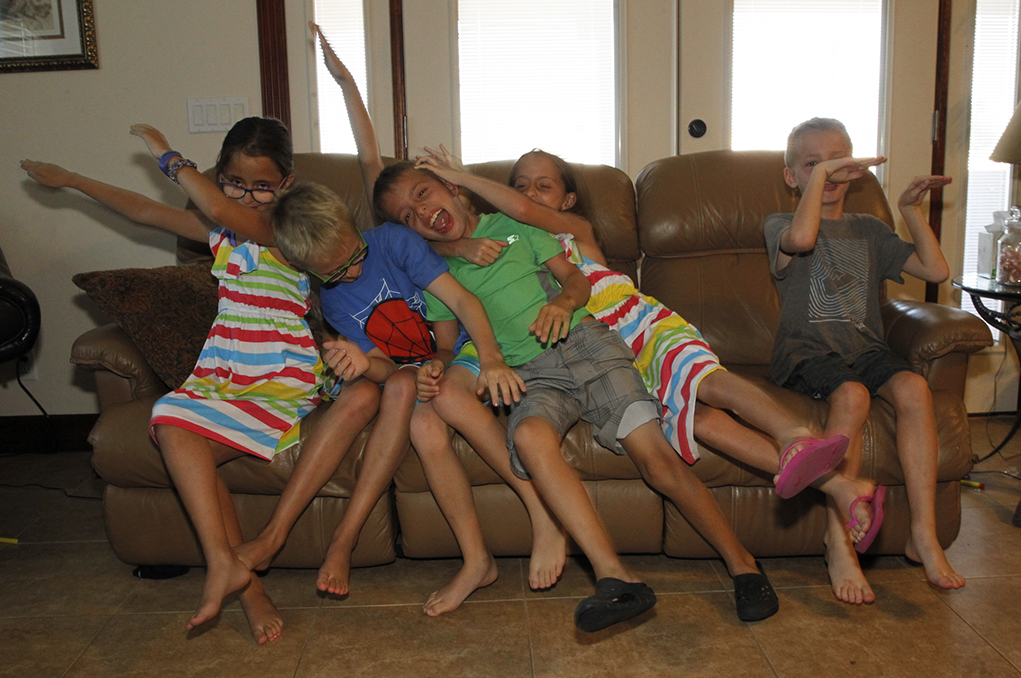 The 10-year-old sextuplets goof around on the couch as typical brothers and sisters do. Jillian Danielson/RiverScene

“Savannah always has been clingy to my side, she helps me with cooking, she cleans, and is the most responsible,” Laura Masche said. “She was the littlest being born, but the doctors said that she would be in charge on day, and she definitely is.”

Savannah is the leader of the group and is in charge of the only cell phone, which is provided by her dad. The others say she is a tough sell when it comes to any of the others using it.

“Bailey has always been the charming one, a pleaser,” Laura Masche said. “She loves to make other people happy. We look to Bailey to be a leader, too. She helps Savannah.”

“Grant is the gentle giant, he is so mellow,” she said. “He is Mr. Sleepyhead, we are always having to wake him up when it’s time to go do something. When he was a baby, he always wanted to be touching one of the brothers and sisters, and he is still like that.”

Cole was the biter of the group and was even nicknamed “The Coco Chomper” as a toddler. Since, he has outgrown the habit. Cole is the daddy Mini-Me. He is the jokester, and claims to be the coolest one among his brothers and sisters.

“Molli always has been just like a very delicate little flower,” Laura Masche said. “She loves her pets and never is combative.”

“Blake is grandpa Bill Masche’s Mini-Me,” she said. “He doesn’t have to ask him. Three years ago, he’d get up to go do construction work with him. He is grandpa’s go-to guy.”

Blake, who was the last one of the sextuplets to be born, has been the first to do pretty much any of the milestones. He was the first to climb his way out of crib and the first one to walk. That moment was in Central Park in New York City, N.Y.

“I have to say, they are six beautifully unique individual personalities,” Laura Masche said.

The sextuplets regularly travel to Havasu to spend time with their grandparents for backyard swimming, relaxing together on the Lake, and making Italian dishes from scratch in their grandmother’s kitchen.

5 Responses to “The Masche Sextuplets Celebrate 10th Birthday In LHC”