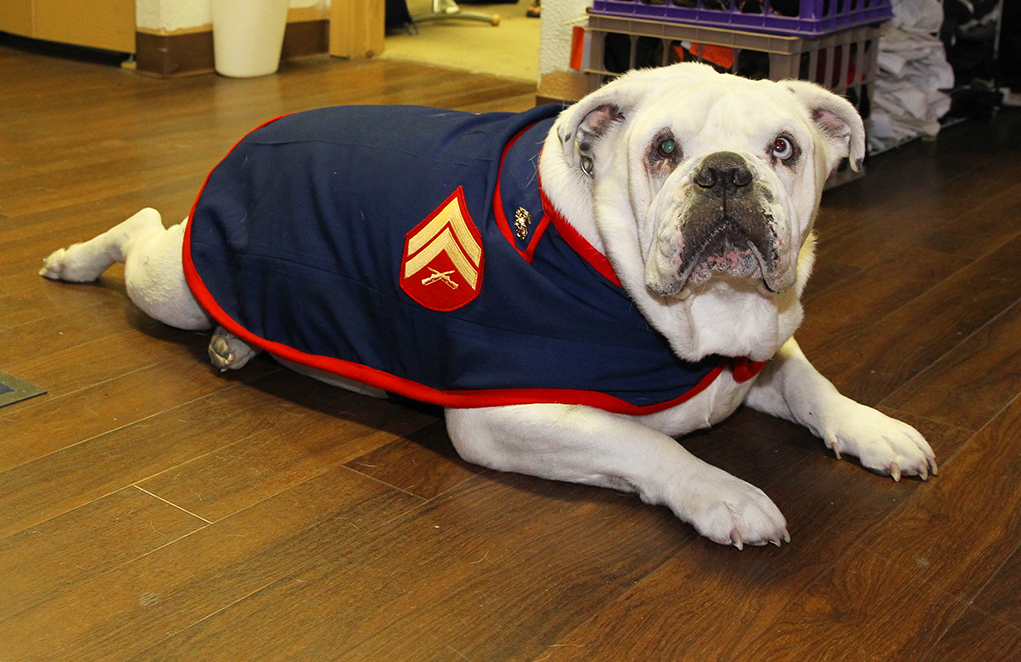 Max is a proud U.S. Marine looking forward to participating in the upcoming London Bridge Days Parade Oct. 31. He is being fitted with a new uniform and will join his fellow Marines in the parade.

Max is an English bulldog. 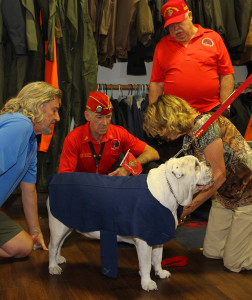 Bill Stephens, Eddie Dunn and Gene Burns watch Max get fitted with the uniform that Karen Chavez is sewing for him. Jillian Danielson/RiverScene

Many people know that the United States Marine Corps League’s unofficial mascot is an English bulldog, but few know how that came about.

During World War II, the Germans thought of U.S. Marines as ferocious fighters and called them “Devil Dogs” after the German myth of Teufelhunder. In Bavarian folklore, Teufelhunder, or “devil dogs,” were wild and vicious mountain dogs. This prompted the Marines to adopt the English bulldog as their mascot.

The Marines’ first mascot was named Jiggs. Pvt. Jiggs was enlisted into the U.S. Marine Corps at a formal ceremony on Oct. 14, 1922, by Brig. Gen.  Smedley Butler. After Pvt. Jiggs died, he was replaced by Jiggs II. Jiggs II died of heat exhaustion in 1928, and all bulldog mascots from then until the early 1950s were named Smedley, in honor of Gen. Smedley Butler.

Beginning in 1957, new mascots were named Chesty, a tribute to Lt. Gen. Lewis “Chesty” Puller Jr., the most decorated Marine in history who earned five Navy Crosses throughout his distinguished military career. The present mascot, since 2013, is PFC Chesty XIV. The mascots rise in rank as earned, and are promoted in formal ceremonies.

The official Marine Corps motto is Semper Fidelis (Semper Fi), which means Always Faithful. Many believe the English bulldog is the perfect mascot for the Marines because it is loyal, tenacious, resolute and faithful, with a never-give-up attitude. 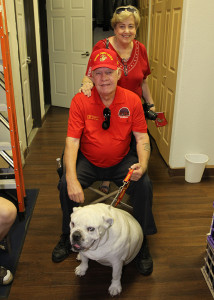 Owen and Peg Olsen pose for a photo with their dog, Max. Jillian Danielson/RiverScene

Max is 4 years old and weighs 95 pounds, and his owner is Owen Olson, of Lake Havasu City. Olson had never considered a bulldog as a pet, but after being without a dog for several years, two years ago his daughter-in-law saw Max in a shelter in California, adopted him, and presented him to Olson.

“I was a little shocked, because I had previously had a Rottweiler,” Olson said, “but it was a welcome surprise.”

Olson wasn’t a member of the Lake Havasu City Marine Corps League, Detachment 757, but a year ago one of their members convinced him to join so that Max could be Detachment 757’s mascot.

“I’m glad to be a member,” Olson said, “because it’s very important to me to help render honors to our fallen comrades.”

Max was in last year’s London Bridge Days Parade, but not in uniform. He recently had his final uniform fitting at The Uniform Shop in Lake Havasu, and Olson said while he himself will be marching in the parade, Max will be riding in a car with Color Guard Captain Gene Burns.

Watch for Max in the parade, and tell him he looks great in his new uniform!