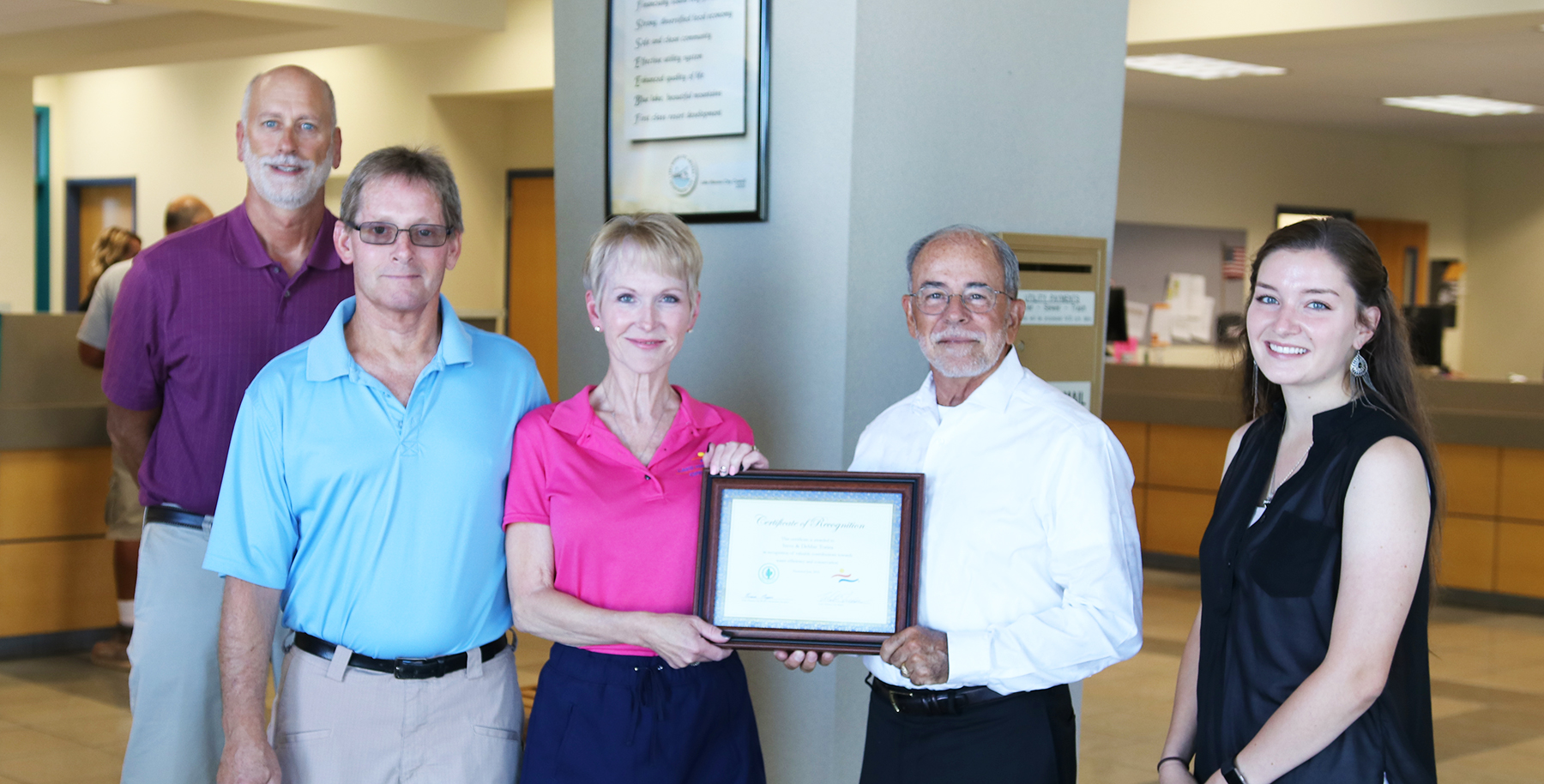 Lake Havasu City Mayor Mark S. Nexsen, along with Briana Morgan, Lake Havasu City’s Water Conservation Specialist, presented Steve and Debbie Torina with a Certificate of Recognition for their water conservation efforts in retrofitting their RO system to divert RO waste to their landscape. The couple is the fifth recipient to earn the award, and the first non-business-related recipients to receive the award as residents.

The Torinas moved to Lake Havasu City five years ago from a water-conscious community in Washington state. In the community where they are from, Steve Torina had mentioned that water conservation was not just encouraged – it was a normal part of living there.

In their Washington community, homes were built to save as much water as possible, and conserving was something every citizen did without even thinking about it. When the couple moved here, they were shocked that there were no regulations on how their home should be built in order to conserve water, and even though it wasn’t required, they decided to install the plumbing to encourage water conservation.

Namely, they installed a hot water recirculation system in their home to prevent water waste in the winter. However, after living here for five years, they discovered there was a bigger water issue they didn’t think about because they didn’t have it in Washington – reverse osmosis systems.

The typical RO system wastes three to five gallons of water in order to produce just one gallon of drinking water, and all of that RO waste is typically sent down the drain. Upon learning this, they decided to re-route this RO “waste” and put it to some good use.

Steve Torina installed some retrofit plumbing to divert the RO waste to a large cistern-like tub in their garage. From there, he put a water pump in the tub, which pumps the water out through a hose that connects to their irrigation valves, and then diverts the water to their landscape.

After installing this system around May of last year, the Torinas realized they could water their entire landscape fully from the RO waste alone, and no longer use potable water to water their plants.

“I don’t understand why this isn’t something that is encouraged or offered for every new building built or remodeled in Lake Havasu City that plans to have an RO system. It is a relatively inexpensive piece of additional plumbing that can save you both water and money,” Steve Torino said.

If you would like to nominate a business, a group or an individual for conservation efforts, contact Lake Havasu City’s Water Conservation Specialist, Briana Morgan, at 928-855-2618.