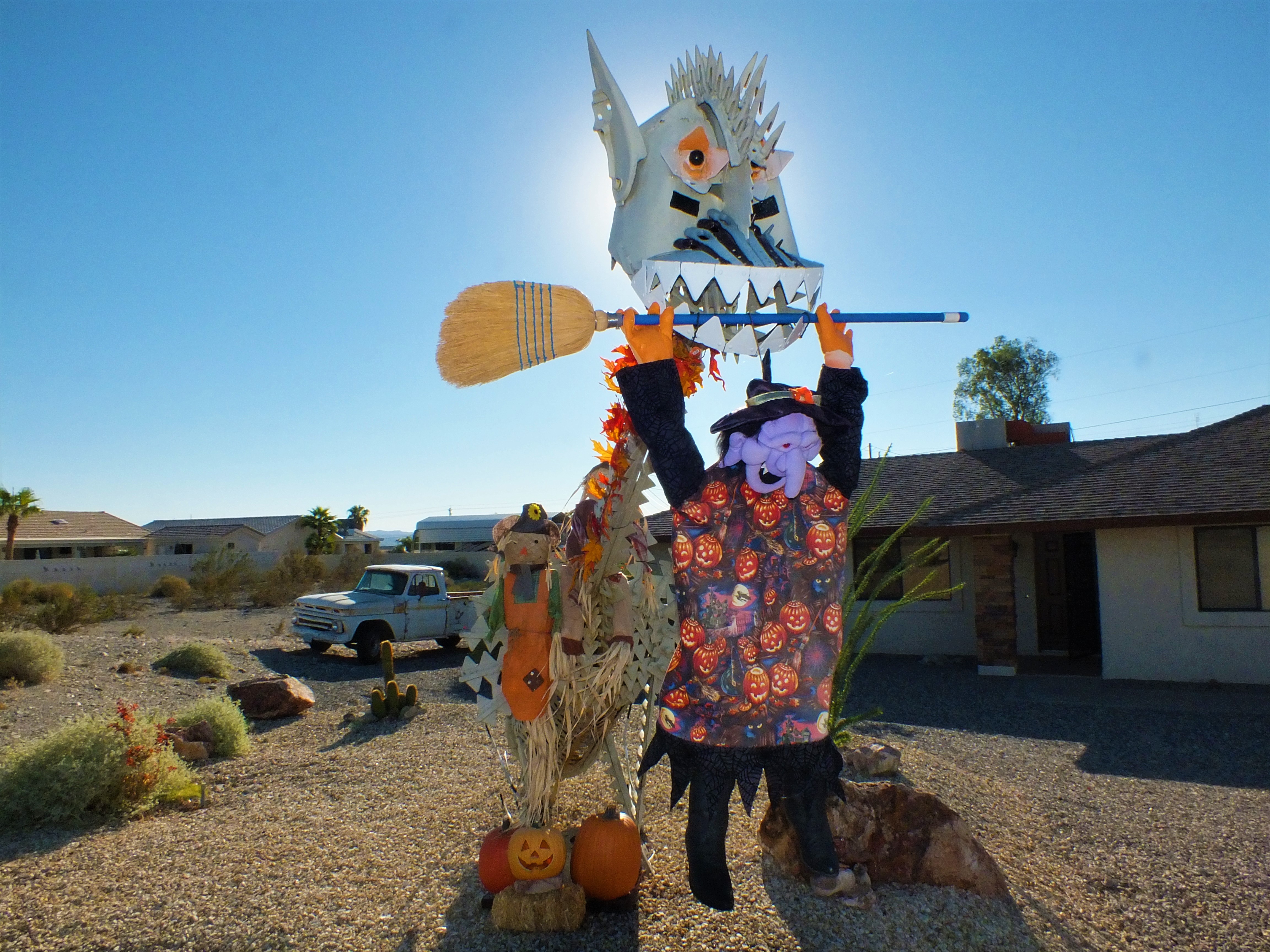 Meet Mowie (short for Mowasaurus), a California transplant that loves to dress up for every holiday season and greet Havasuvians each and everyday.

Mowie was born in 1990 in Elverta, Calif., when 71-year-old James McGrew was inspired by the metal artwork of his nephew. McGrew was a hay and straw dealer and was surrounded by micellaneous machinery with parts to spare. So, he put some pieces together to see what he could make. Thus, the Mowasuarus was forged from old mower materials.

Mowie’s head is 12-gauge sheet metal formed around a steel tractor seat. His eyes and teeth are conjoined mower sections. A neck made of a mower bar with attached mower knives to make the rigid appearance. A baler wheel and truck wheel locking rim join the mower bar to make the upper torso and the lower torso is covered with mover knife “scales.” Mowie’s curved tail rings are old dump rake teeth and the feet are swathboard holders. Overall, Mowie is a treasure comprised of yesterday’s tools. 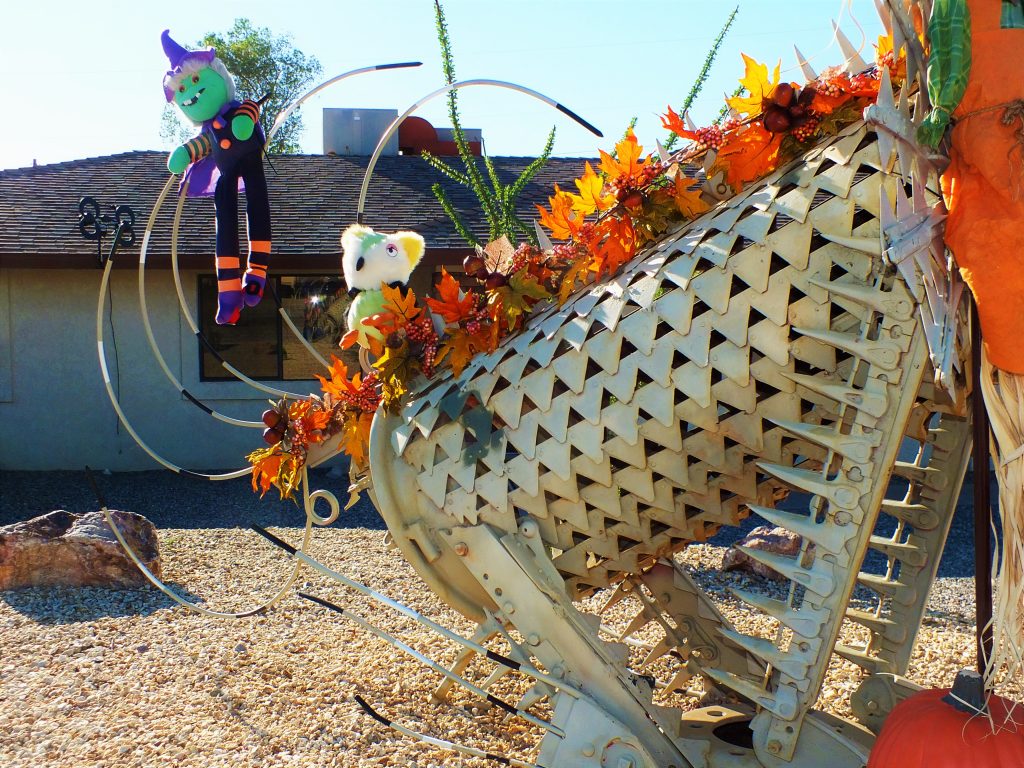 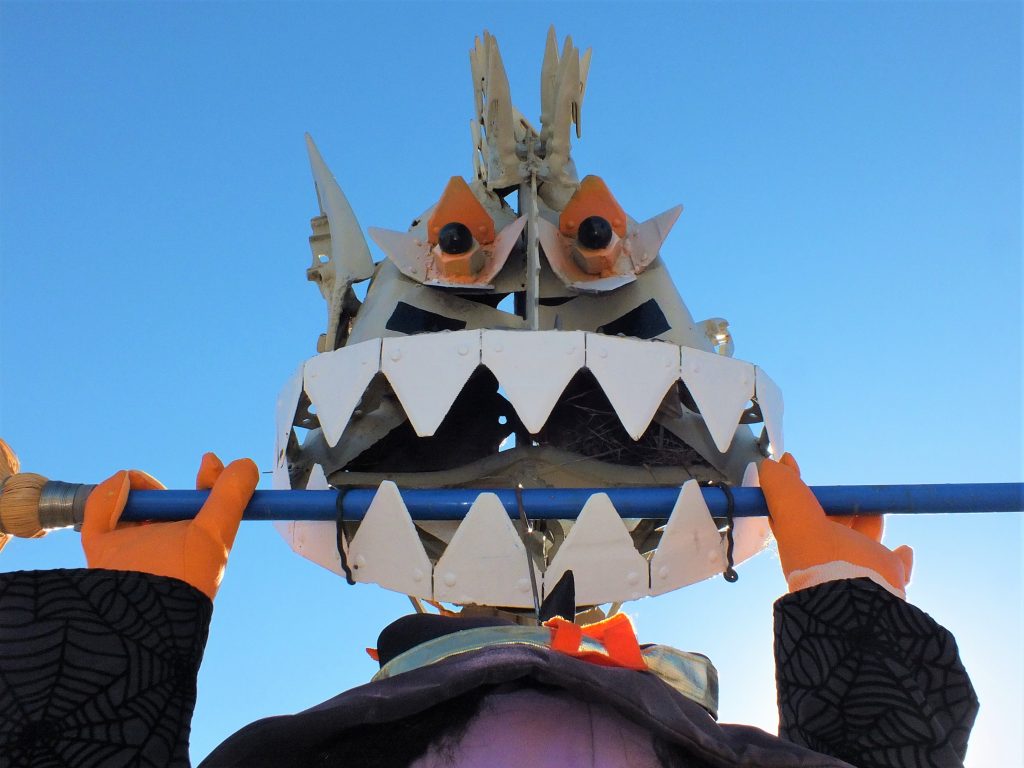 “It was the first one he made and the biggest one he ever made. He kept history on all the parts and what machines the came off of,” explains Shrue, “He has made over 100 pieces total” 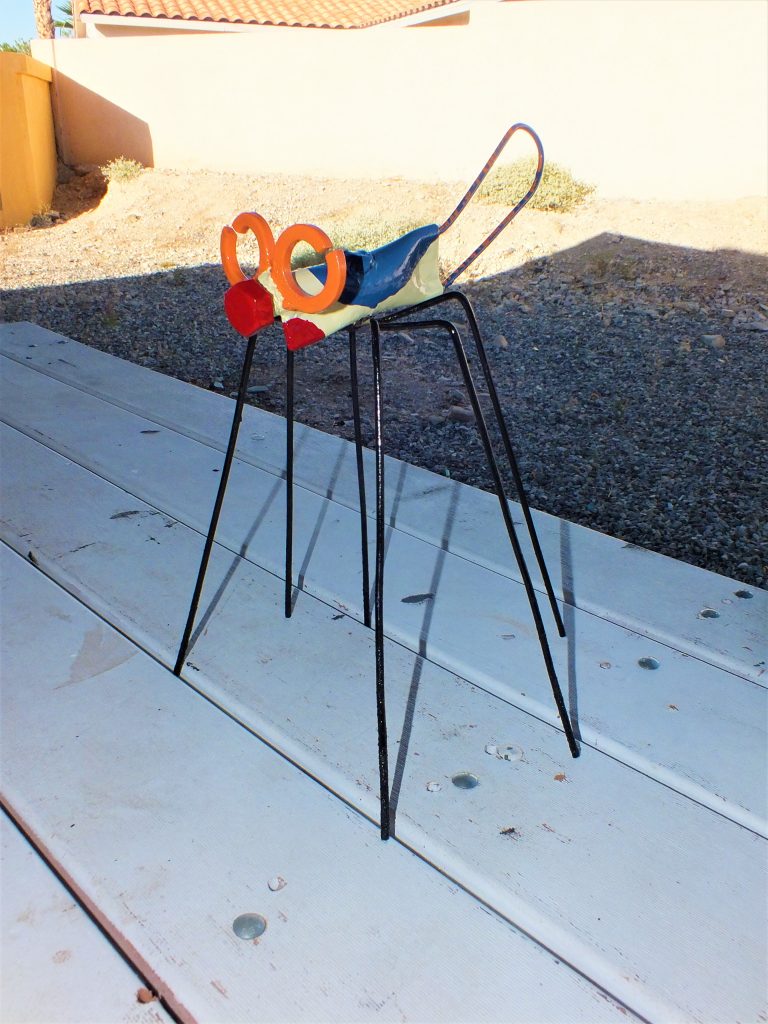 One of 50 bugs made by McGrew for his daughter. Grace Usher/RiverScene

When James and his wife of more than 70 years, Laline, passed away in 2013, Mowie moved to Bullhead City, Ariz., with their daughter Janeen Scharf. Last July, Scharf and Mowie settled down in Lake Havasu.

With the help of some extended family and a pickup truck, Mowie was taken apart into two pieces. When he arrived at his Bullhead City home, he was welded back together. When Scharf decided to move to Lake Havasu, a local landscape company helped Mowie with the transition.

Scharf keeps the legacy and memory of her parents and her childhood home alive in Mowie.  “He was such a part of who my dad was,” She explains, “Couldn’t leave him behind.”

Today, Scharf wants to keep Mowie a friendly neighborhood dinosaur. He is always dressed to his best for each season from pool noodles and life jackets in the summer, and fall leaves and pumpkins in the Fall. During the River Regatta motorcycle run, Mowie had a tiger in a leather jacket with handlebars to celebrate the run.

“I would like  to dress him up for local events” shares Scharf. 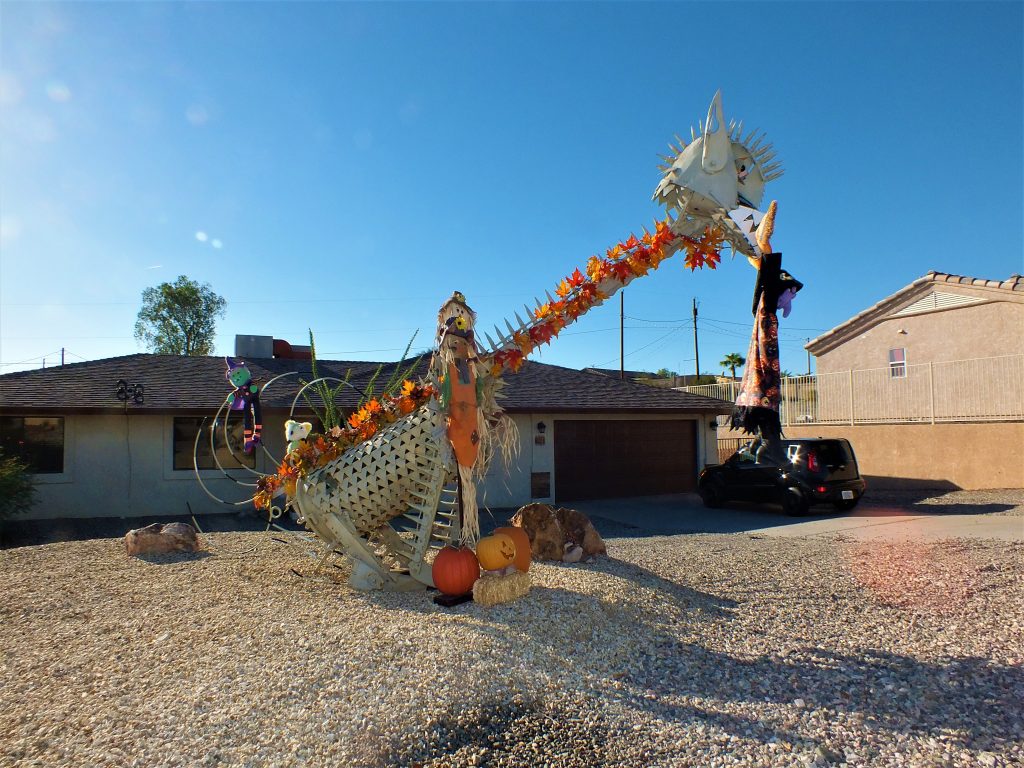 Mowie is dressed up for the Fall Season. Grace Usher/RiverScene

Mowie now sits proudly in the front yard to guard the house and greet passersby. At 10-feet tall and around 600 pounds, Mowie is one hard dinosaur to miss. When at the corner of Acoma and Rainbow, say “”Hi” to the Mowasaraus, Lake Havasu’s one and only friendly neighborhood dinosaur.