Meet the Millsaps: From Supercross To Homelife In Havasu 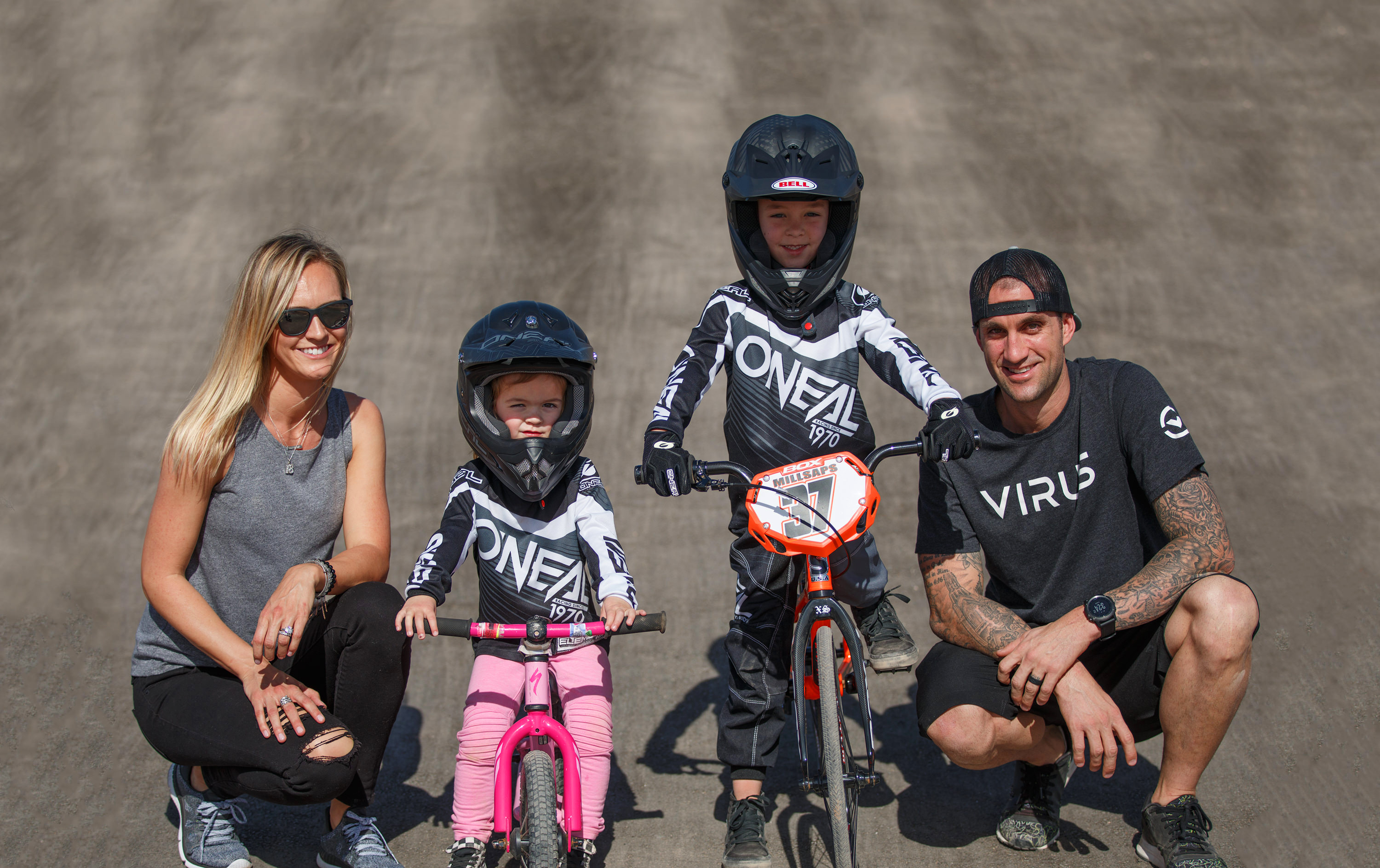 Some careers are more than just a 9 to 5 desk job. In fact, a career in any professional sport becomes a lifestyle for both the athlete and the family.

In the world of professional dirt bike racing, Davi and Britney Millsaps eat, breathe and live for the race. The Millsaps now have settled down in sunny Lake Havasu City.

Champion Supercross racer, Davi Millsaps, was born in Orlando, Fla.. Both of his parents raced dirt bikes and decided to pass on the sport to Davi and his sister at ages 3 and 5. Davi Millsaps took on dirt bike racing with full passion and the family noticed. When he reached the age of 12, the family moved to Georgia to pursue dirt biking full-force. 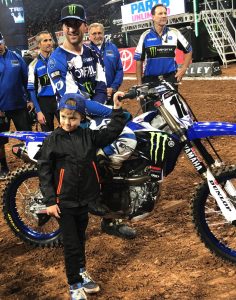 Davi and his son in Atlanta. photo courtesy Cali George

“We moved to Georgia for my racing and we were able to build more track. It just took off,” said Davi Millsaps.

“I was born in California, but I call home Lake Havasu” said Brittney.

Being from different sides of the country, it seems improbable the two would cross paths, and eventually fall in love, but anything is possible in the world of Supercross.

May 2005 marked the Las Vegas round of the Supercross season. Davi Millsaps had won the race of the evening and Britney had won the title of Miss Supercross. Like a match made in heaven, the two met on the podium that night. 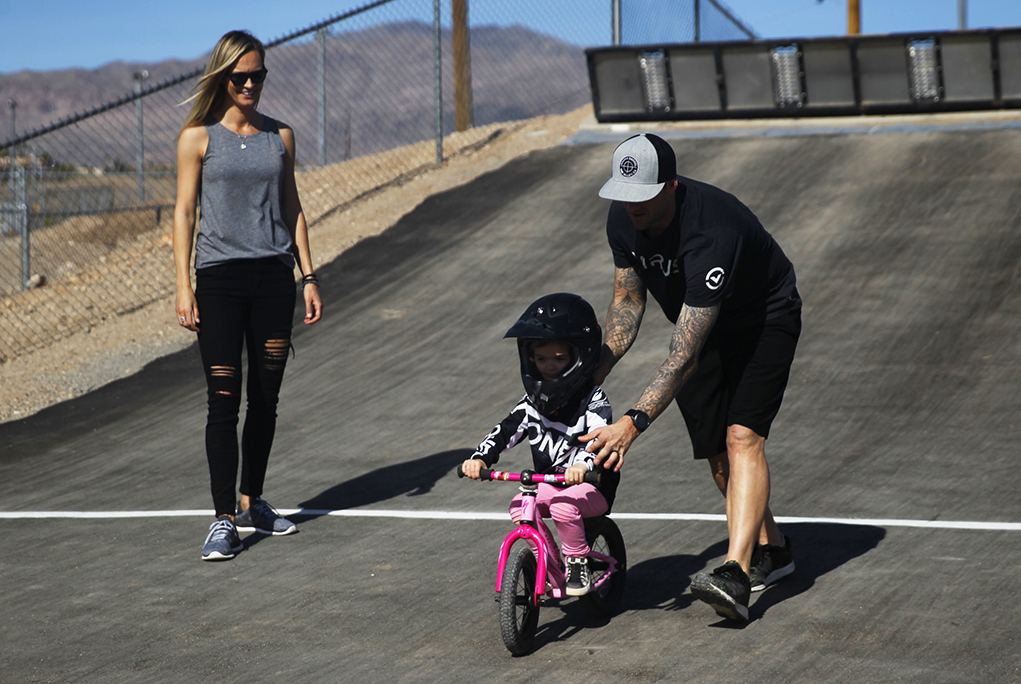 They casually saw each other during races and officially started dating in July 2006. The couple just celebrated their eighth anniversary this year.

To make it to the professional tier of dirt bike racing, Davi Millsaaps had to dedicate himself completely to the sport. As an amateur rider, races are all over the map and traveling is a staple in any racer’s career. For the amateur nationals, there were two in Texas, one in Las Vegas, a few in California, Florida, with Tennessee the biggest one of the year. 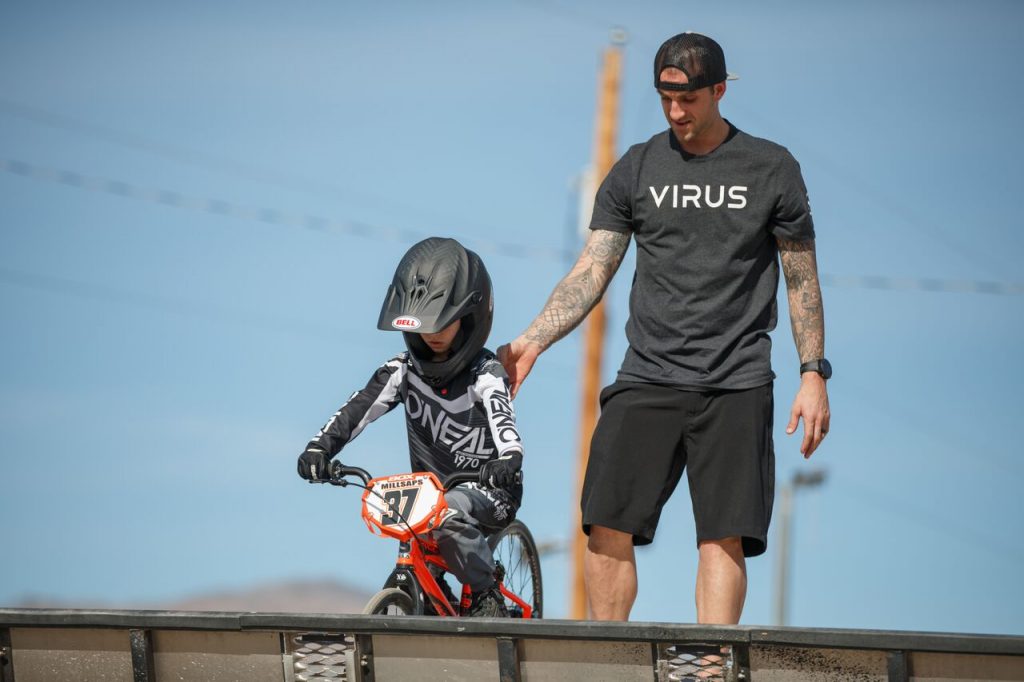 Along with travelling, a  serious rider has to have availability to a track at all times. While also developing a keen skill on the bike, Davi Millsaps also had to focus on proper diet and exercise to maintain good health both on and off the track.

“I started really training at age nine or ten, running and cycling to stay in shape off the dirtbike. It takes a lot and a family to dedicate themselves, and a lot of money,” Davi Millsaps said. 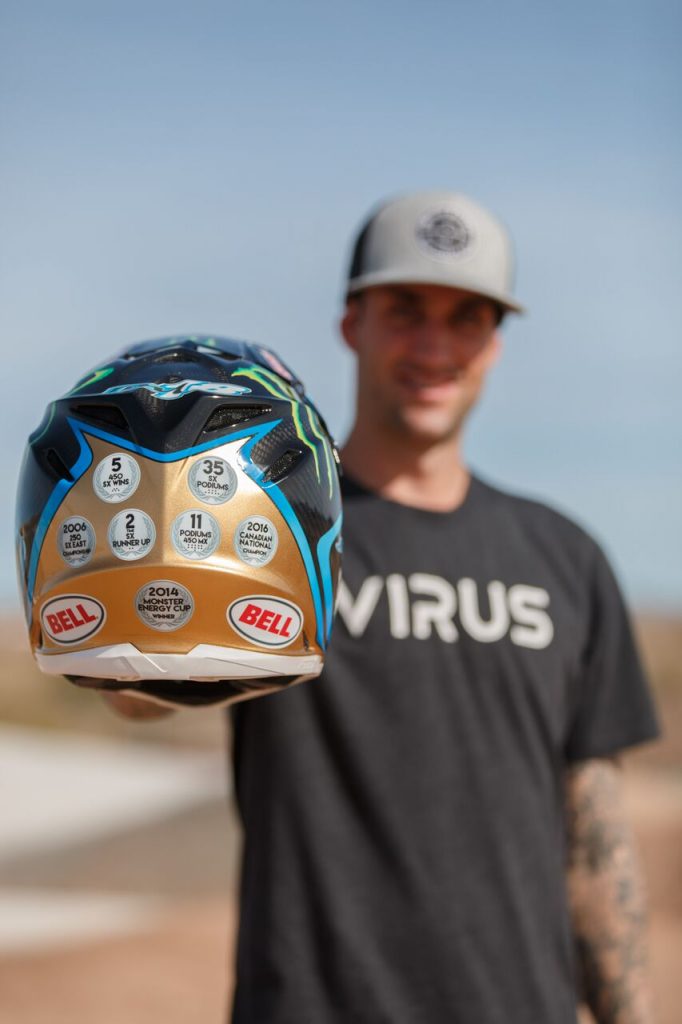 Davi Millsaps poses with a helmet that was given to him at a Supercross event in Atlanta. The helmet has some of his championships on it. Robert Smith/RiverScene

As an amateur racer, Millsaps was raking in around 10 championship wins per year. While racing in the Pro Circuit, Millsaps one championship in Supercross, one Canadian championship, and was runner up twice.

Davi Millsaps has had multiple sponsors throughout his Supercross career including: Suzuki, Honda, Yamaha, Rockstar Suzuki, Kawasaki, Rocky Mountain ATV and KTM. His most recent sponsor is Monster Energy Factory Yamaha. Millsaps has ridden nearly every bike in the Professional tier of racing.

Before each race, Millsaps had rituals for dressing and getting ready for the track. If the previous race went well for him, Millsaps would mimic his pre-race ritual to spark up the good energy for that weekend. On the other hand, if he raced poorly or got hurt, he would throw away everything and never use it again. If he crashed in a certain color gear, he would go as far as never wearing that color again!

On October 5, 2017,  Davi Millsaps, No. 18, would take his final ride as a professional Supercross racer. Davi Millsaps had just finished testing the track when he had a serious crash. It was the discovered that the crash had left Millsaps with a severe concussion and disintegrated elbow.

“I don’t remember the crash or much of the couple weeks after. I had bleeding around my entire brain and significant bleeding in the center of my brain which is connected to my motor skills. On my elbow, I tore the triceps from the bone. They had to put that back together and have bone grafting. My head is the biggest reason why I can no longer race. I can’t afford to hit my head again”

Millsaps stated that he should be in a much worse condition if it weren’t for the people who pushed him to wear a Bell helmet. He credits the helmet to saving his life. 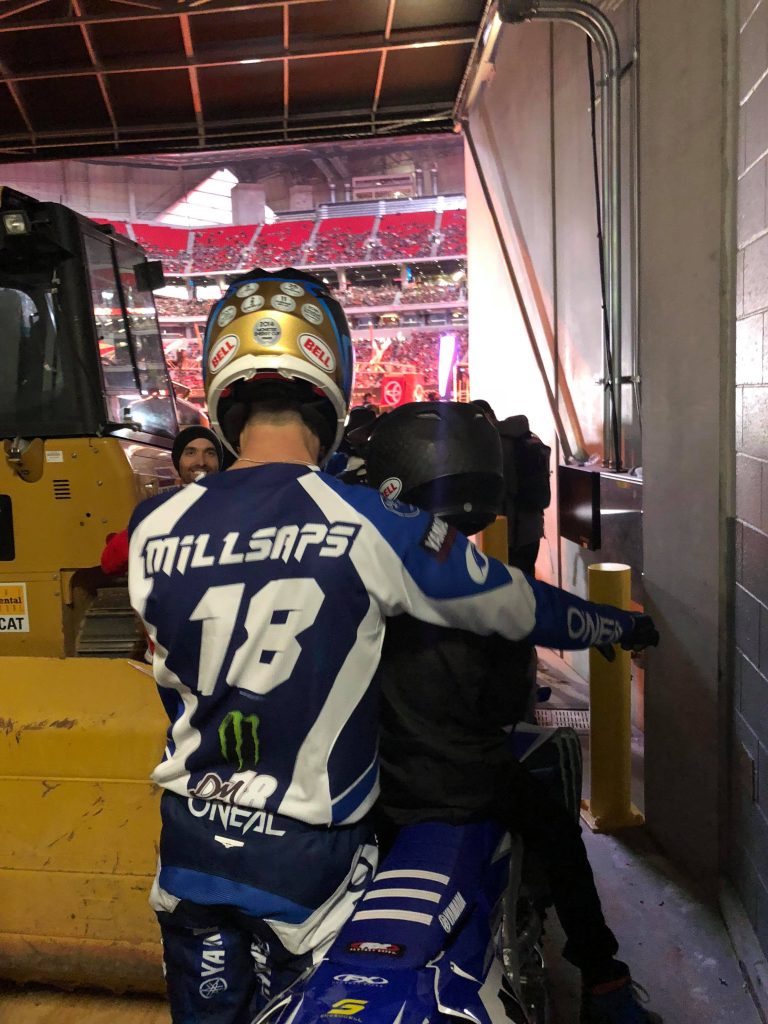 Davi and Dane prepare to ride in an arena in Atlanta for his last Supercross lap before retirement. photo courtesy Cali George

Supercross honored the racer in Atlanta this year with a final lap in his home state. The racer hit the track one last time accompanied by son, Dane. Millsaps is the only Georgian to win Supercross in Atlanta.

Davi Millsaps took the final lap with his and Brittney’s family in the stands, his past teams at the starting line and with all of his Atlanta fans cheering him on.

After the accident, the couple decided to become full-time residents of their favorite vacation destination and Brittney’s  hometown, Lake Havasu City. The family bought their forever-home in August 2017.

“I was hoping that when racing was winding down and the kids were getting older that we could move here. I wanted to be closer to my family and raise my kids here. I really enjoyed growing up here and Davi fell in love with Havasu because he could go out in the side-by-side. Any down time we had from racing, we came out here to go out on the boat as much as possible to be honest. Lake days with the kids and us and the family are probably our favorite.” said Brittney Millsaps.

“I have been racing dirt bikes for 27 years and I just turned 30. I never really had a normal family life with Brittney and the kids so being able to hangout and do the stuff I haven’t been able to do since Dane was born is a little different. I just want to hangout with them. ” said Davi Millsaps. 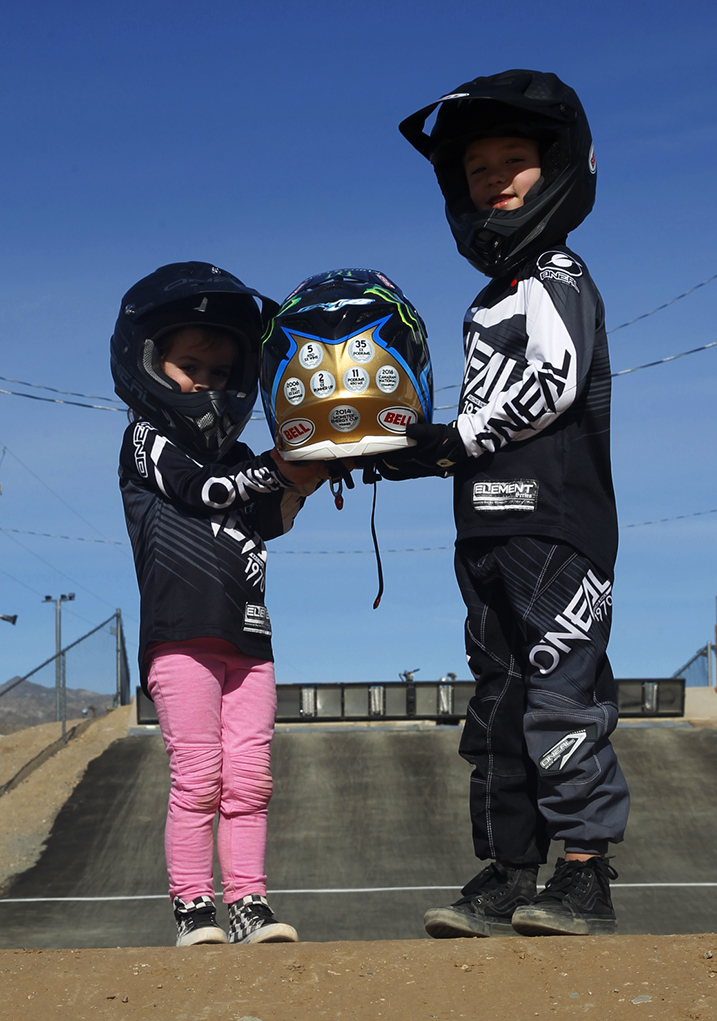 Bryn and Dane hold their dad’s helmet on the BMX track in Lake Havasu. Jillian Danielson/RiverScene

“Racing schedule is tough. We tried to take the kids as much as we could. Our son started kindergarten so we wanted to be here but still go to races. Now that we are done with racing, Davi and I have a few opportunities and ideas of what we want to do for a business. And we are using our home as a remodeling project.” added Brittney.

Davi Millsaps has officially retired from racing and the power-duo now dabble in any opportunity that comes their way. The main goal of the Havasu family is to spend time with each other and make memories that could not have happened during racing life. 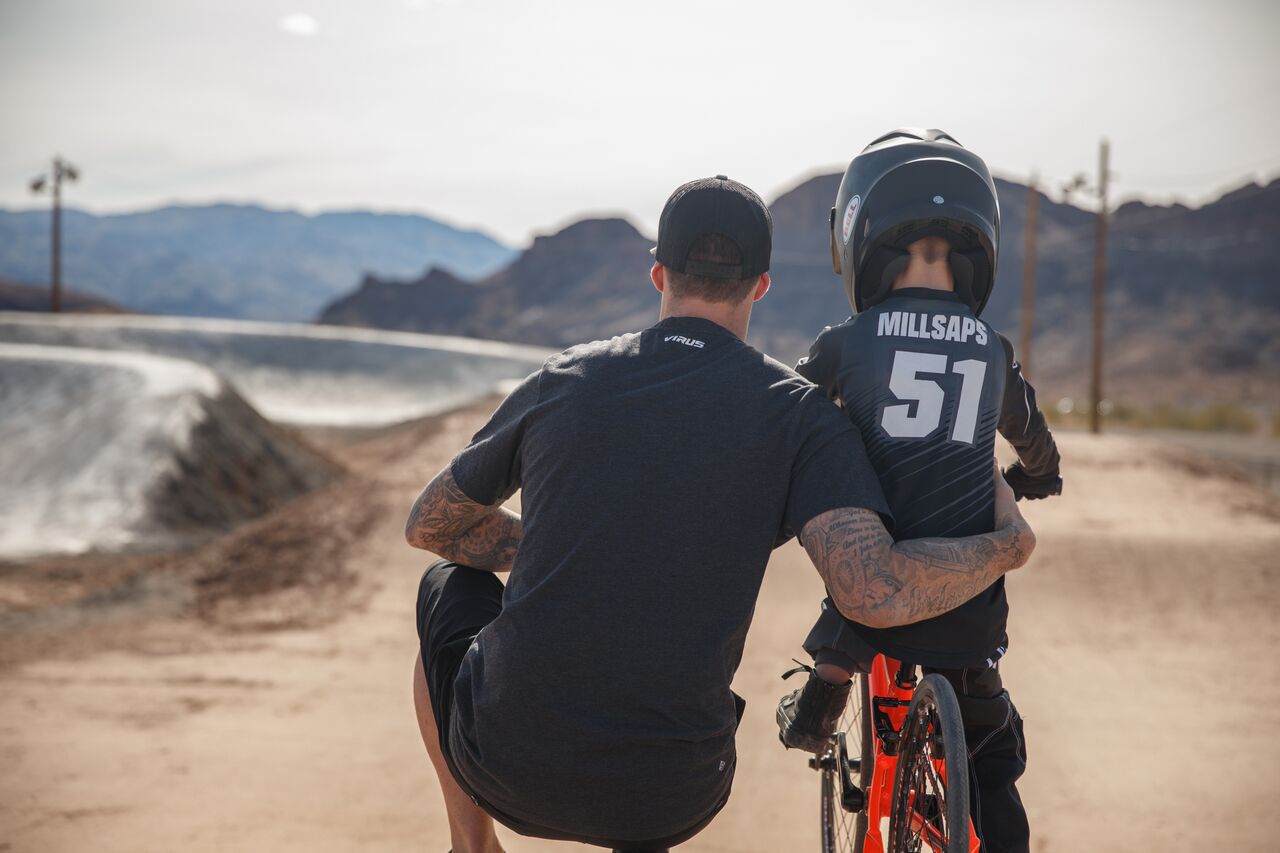 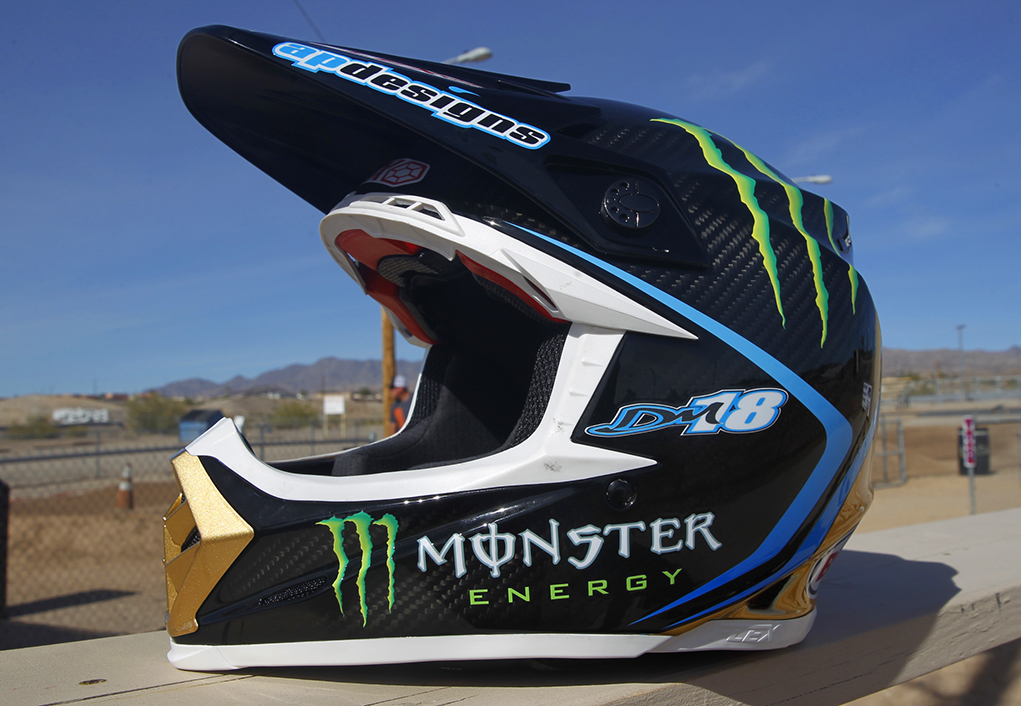 A side view of Millsap’s helmet that was given to him on his last ride in Atlanta. Jillian Danielson/RiverScene 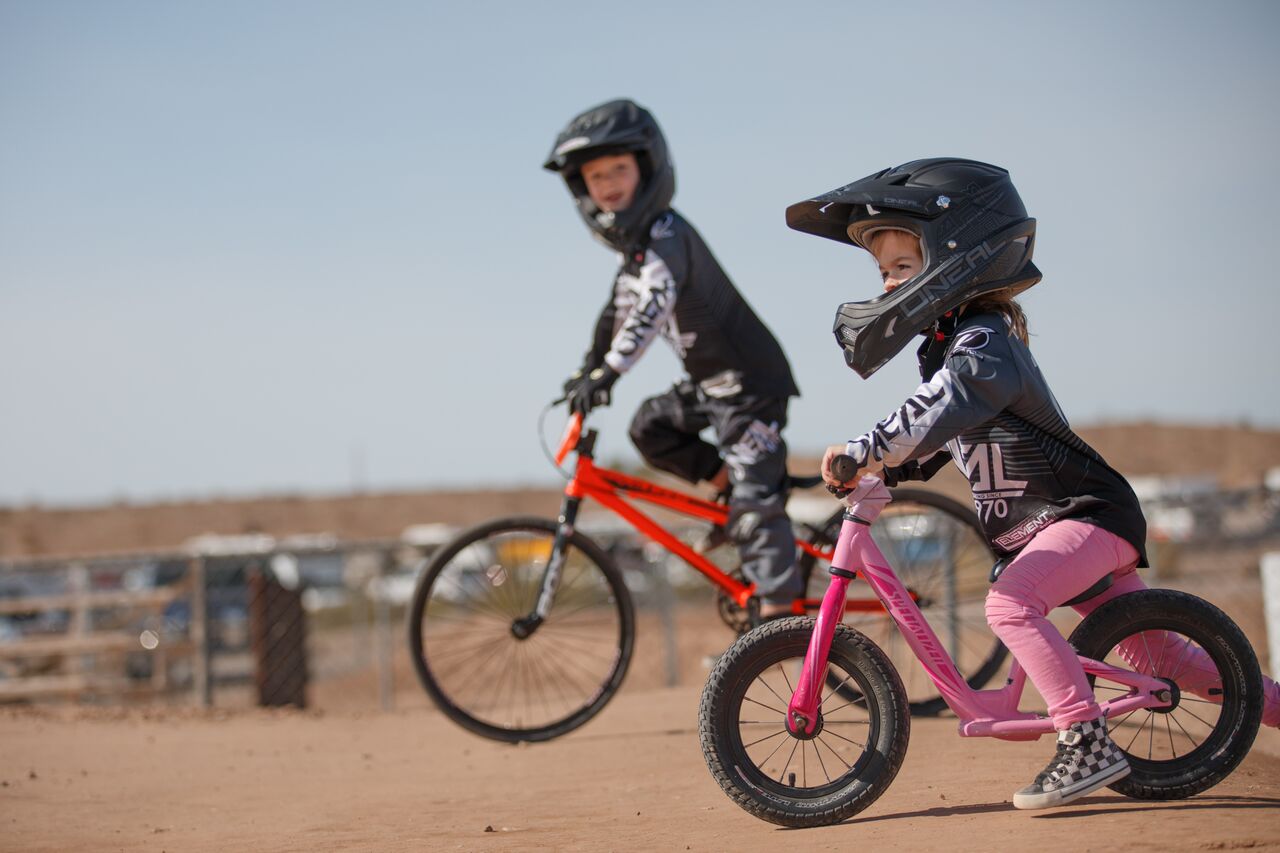