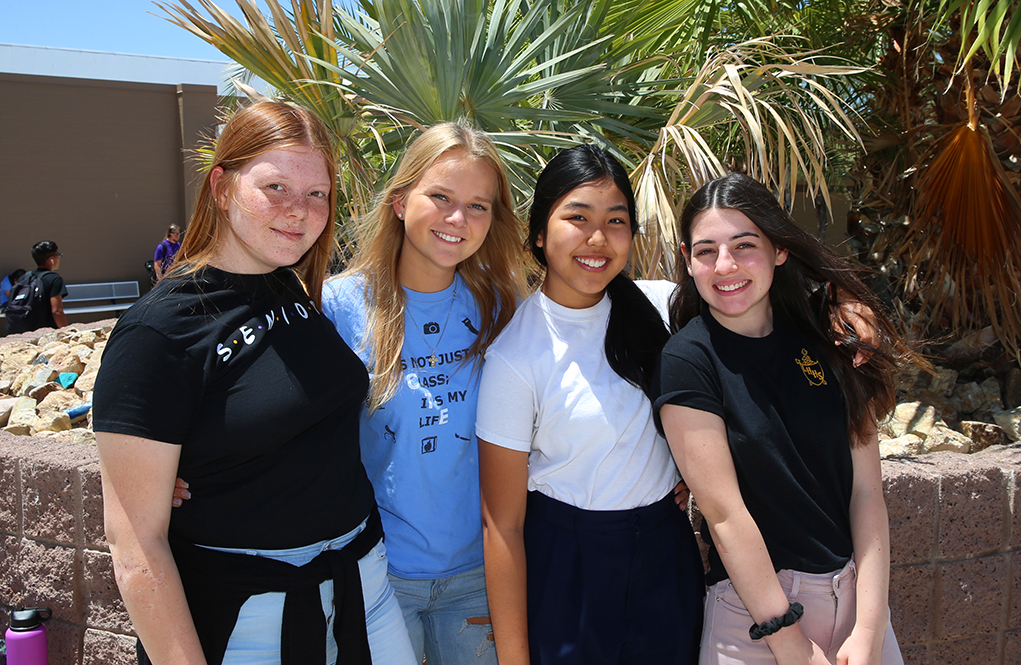 It is tradition to share a cultural exchange with students from the United States to foreign lands and vice versa. Those eligible are typically 12th-grade senior-level students who go through an application process to be chosen for either a semester or year-long term.

This year, Lake Havasu High School opened their doors to five foreign exchange students. These students have learned to adapt to new environments while also bringing each of their unique cultural flares to LHHS.

Kristina Furbo is a Denmark native who is a first-time visitor to the United States. After flying in from New York City to Las Vegas, Kristina came to Lake Havasu to spend a year in a fresh environment.

She has stayed with the Bracamonte family and goes to school with her “host sister” and fellow student, Tatum Bracamonte. She said she has been homesick at times but her host family has been warm and welcoming.

She has enjoyed how big and pretty the areas of the United States she has visited have been. When Furbo returns to Denmark, she said she thinks she will “be better person. [As an exchange student], you don’t live in your home and you have to respect everyone and be a good kid. I think I will be a really good kid when I come back.”

Fellow European Amelia Bolognini traveled from Italy for her exchange experience. As a participant of the Rotary International Exchange Program, she has rotated between three host families: The McGuires, The Subchucks and The Marcums.

“America is kind of an opportunity. You have the opportunity to do so many things and do them well.”

She was an avid theater member in her town back home. Though her Italian city was larger than Lake Havasu, she says that the theater program of LHHS is “much more organized and bigger.”

This is Bolognini’s first visit to the United States, and she said her favorite part of Lake Havasu, in particular, is that it never gets cold. In the final homestretch of her exchange term, she said that she is not homesick but home-stoked to see her friends and family as they prepare for her return.

She said she hopes to return to Italy with the mindset of “getting stuff done” and “getting her life together.” Very typical of most seniors leaving high school into the jungles of the real world.

Asian exchange student Krittaporn Pituckumpol hails from Thailand. Pituckumpol’s travel was the longest of all the students as she flew from Thailand with stops in Japan and New York before her final flight into Las Vegas. She came to Lake Havasu through the Education First (EF) High School Exchange Year  program. Being from the vast city of Bangkok, the lack of streetlights in Lake Havasu was a detail she found interesting.

Her host family is The Van der Riets. She also found herself to be more food sick than home sick.

“The Thai restaurants here are not real Thai food. We have american restaurants but they are different.”

When it comes to teenagers in the United States versus Thailand, American students she found to be more independent in their ways.

The fourth exchange student for the 2017-2018 school year was Brazilian, Carolina Clemente. Clemente was also a Rotary Exchange Program member and stayed with the Hernandez, the Colvak and the Lopez families. Unlike her fellow exchange students, this is Clemente’s second time visiting the United States and she appreciates the variety of options the United States brings; particularly in grocery stores.

One of the major differences she found in American teens is the lack of fashion trends that are followed.

Her favorite part of Lake Havasu – the stunning sunsets.

“They are the prettiest thing I have ever seen.”

When she returns to Brazil, she will take her newfound knowledge on sewing (thanks to instructor Ms. Niskanen) and a better understanding on how to be independent.

Though each foreign exchange student came from a different culture and walk-of-life, they each agreed on some key differences in the American education culture.

In each of their countries, the student cohorts are formed based on age, grade, or education pathway. These cohorts stay in the same classroom and the teachers rotate as opposed to the rotating classroom visits of the average American student.

Another trait that is unique to the American teenager is the amount of responsibility and freedom they each hold. In other countries, the minimum driving age is 18 rather than the U.S.’s 16 legal driving age. They also stated that studying is more time extensive in their home countries and most students do not have part-time or full-time jobs outside of the classroom.

Each student will return to their home country at the end of the semester. Though they are leaving Lake Havasu, the memories made and lessons learned, will be taken back and shared to their friends and family.

The fifth student, Martin MBongoum, wasn’t available for the interview.

Foreign exchange is an opportunity for students throughout the world. For more information on local and international exchange programs, visit: