Lake Havasu City will join other cities in America that have military banners to honor men and women who are currently serving in the Armed Forces.

The Lake Havasu City Military Moms and The Shops at Lake Havasu have formed a partnership to place the banners on property at The Shops. Full-color banners will be hung on street lights in and around the Center Court, and will feature a photo of each military member. 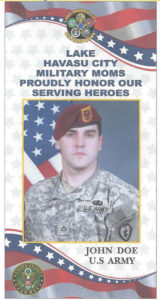 An example of a banner by Southside signs. photo courtesy Military Moms

“When we were first approached as a potential location,” Misurelli continued, “our first thought was one of pure privilege and humility. Providing the host location to our local Military Banner program is the ultimate way to show our appreciation to those who are serving.”

“Military Moms are proud to be able to give our community a way to show our active duty military men and women that we support their service and sacrifice to our country,” Military Banner Project Coordinator Judy Lacey said. “It’s a very small thank you for all they do, but it’s from our hearts. These men and women are true hometown heroes.”

The program will also accept applications for banners to honor KIAs, those who were killed during wartime, in battle, in accordance with the Department of Defense’s KIA definition. A DD1300, Report of Casualty, is required. Those banners will be permanently installed.

The cost of a banner is $150. Photos of those being honored should be formal, with the military member in uniform. The photo submitted must be at least 300 dpi, preferably with the U.S. flag in the background.

The official announcement and dedication of the Military Banner Project will be made during The Shops at Lake Havasu’s USO Show on Veterans Day, Nov. 11, from 6 to 8 p.m. in the Center Court area.