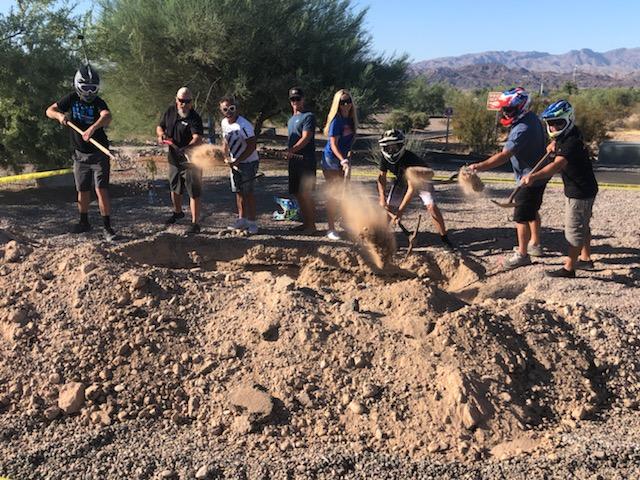 Groundbreaking for a new PWC Monument Project happened Wednesday on the island in Lake Havasu City as the three-phase project ramps for a September install.

“It’s on the corner of Beachcomber and McCulloch, on the island near the walking path,” said Chris Hagest, PWC Monument Project coordinator. “If you turn right from McCulloch toward Crazy Horse Campground, the PWC monument site will be on the left-hand side of the corner.”

Efforts for the personal watercraft monument project were off to a slow start last spring but soon morphed into talks with city officials, securing permits, breaking ground at the monument, and organized fundraising. 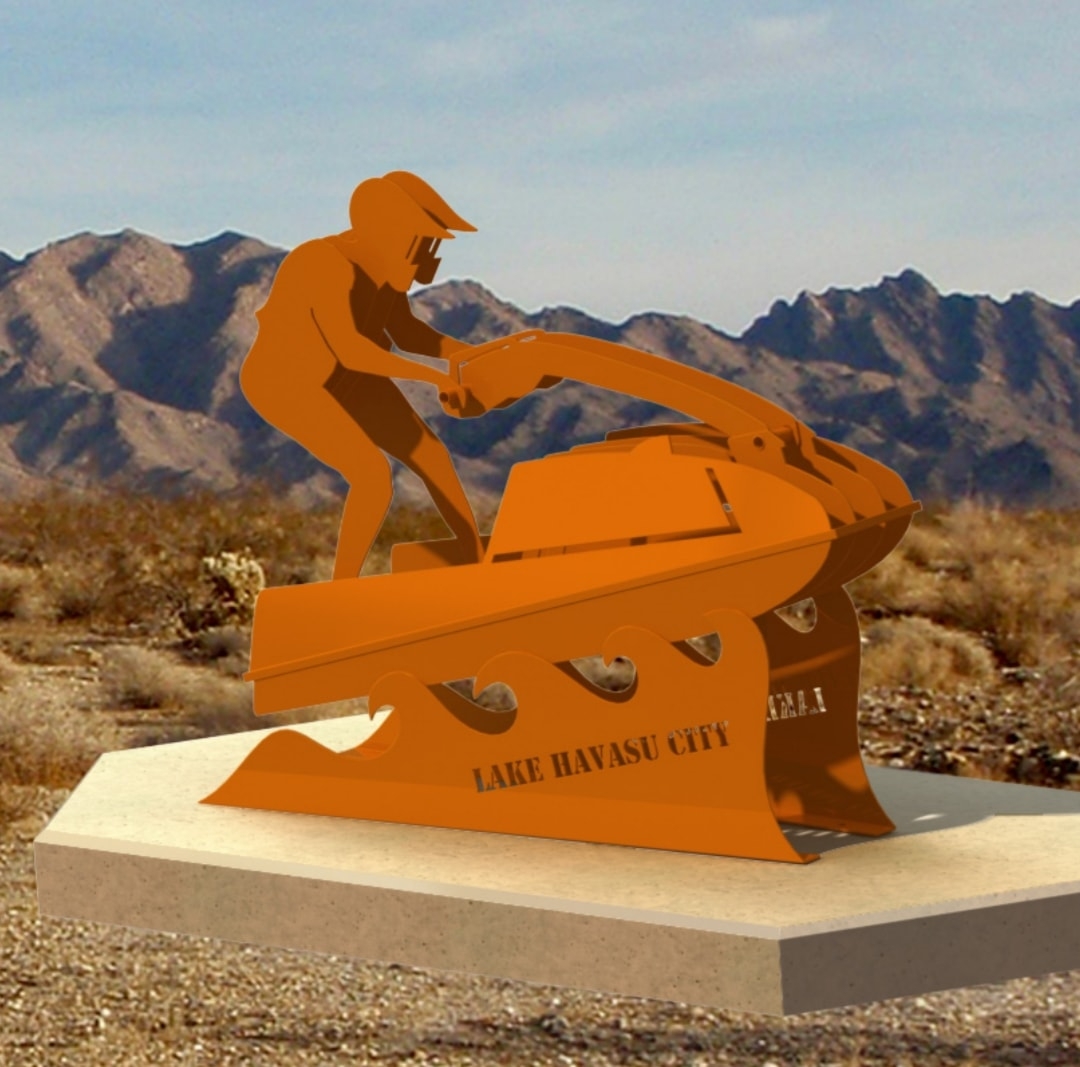 Photo of what the monument will look like courtesy Chris Hagest.

The location chosen was one that would make sense to the PWC community because IJSBA world finals always are hosted on the island, Sheehy said.

Local artist Jaque Meng, owner of The Q Art Gallery, in Havasu, is onboard to construct the actual monument set to begin in mid-August, Hagest said.

The phase-one install would include the monument, a history plaque, and surrounding walkway. It’s tentatively scheduled for the second week of September. 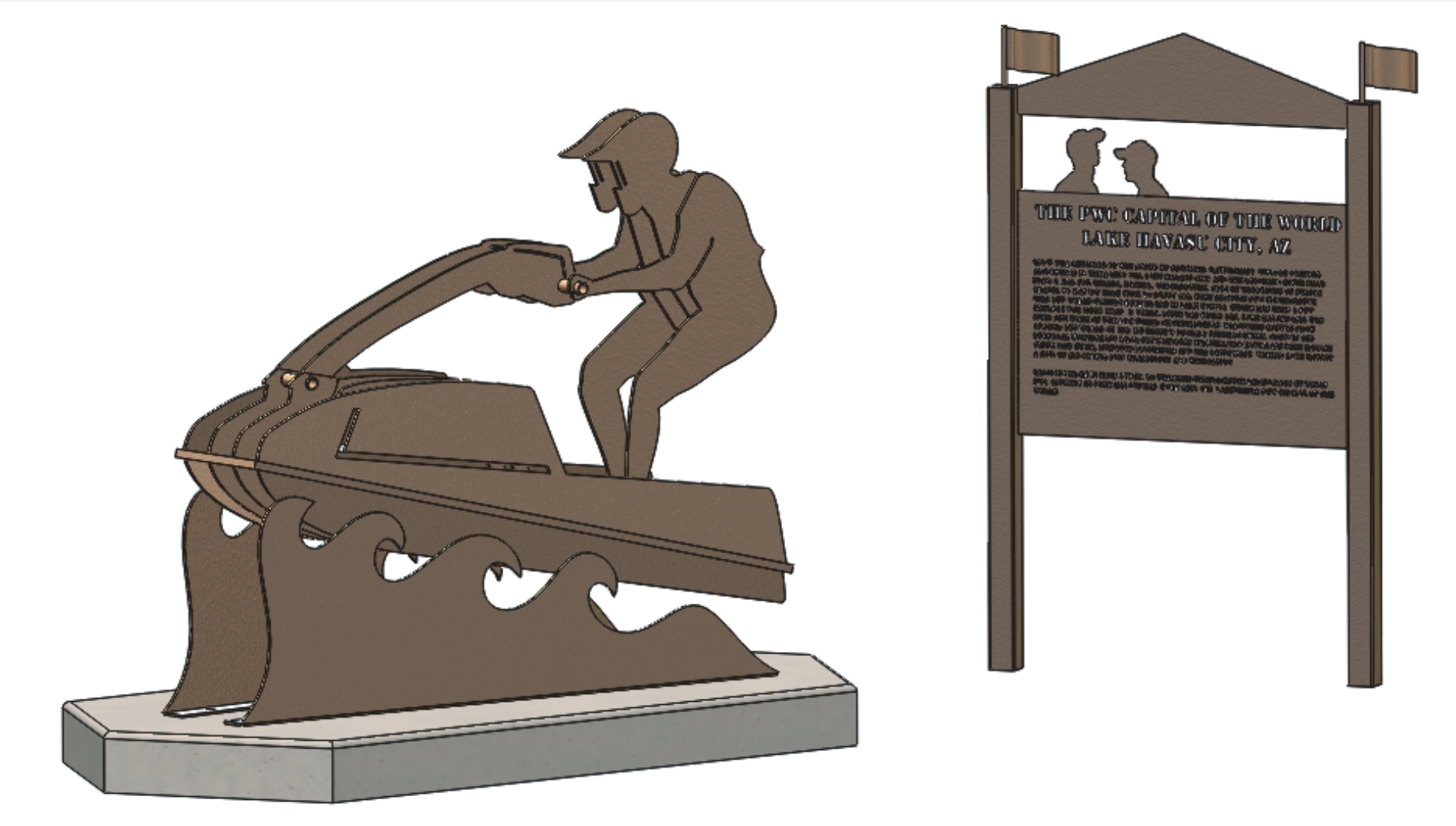 The second phase would include a full-bore historical story line amid stations pertaining to the personal watercraft’s timeline and its ties to Havasu. The third phase would be a further landscaped and extended walkway area.

“It’s a story line, or timeline, of the sport and how it came to be from conception, to innovation, to enthusiasts and the world championship that’s been hosted here for about 40 years,” Hagest said.

According to IJSBA.com, the International Jet Sports Boating Association World Finals are set to commence October 5-11, in Havasu, with many precautions being implemented for COVID-19. The website states summer 2020 has been a banner year with an agreement that was signed with city authorities to secure Lake Havasu as the venue for the IJSBA world finals for the next decade. It also states that 2021 will be the event’s 40th year. 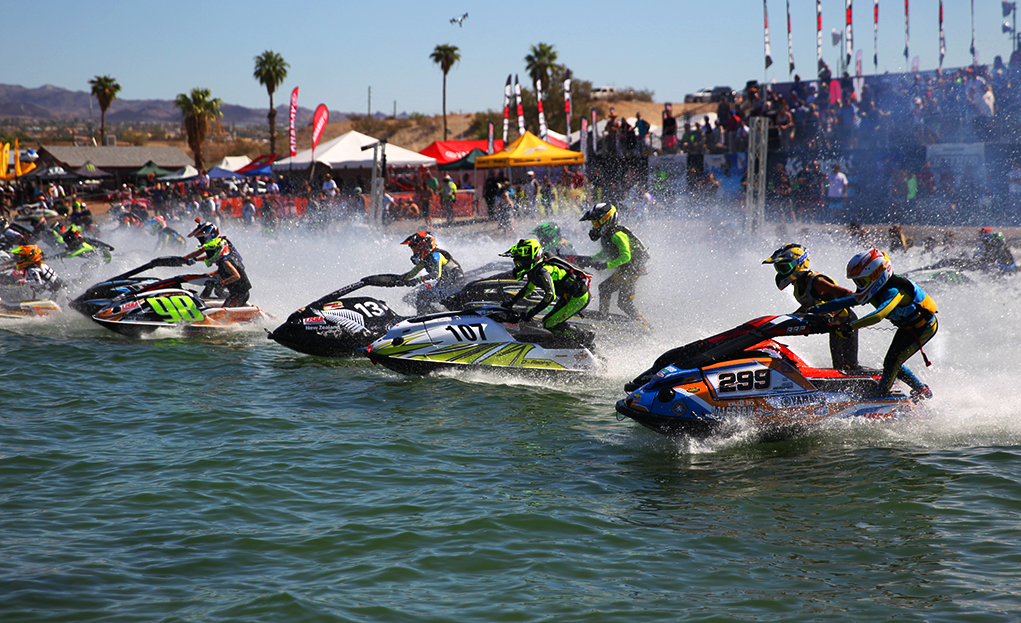 “Havasu is important to PWC,” Hagest said. “It’s the PWC capitol of the world and we need a monument. We need to celebrate the decades of good times and the innovation. This will help continue the future of it here.”

Hagest, a nationally titled professional PWC racer, motorsports enthusiast, and local watersports industry business owner, has been in the PWC racing game since 1992.

“It’s that connection with that using some sort of powerful machine to have a one-person experience, enjoying the lake, and cutting through the water,” he said. “I love motorsports, Havasu drew me in because of the watersports.”

In 2014, Hagest opened his business ProWatercraft, which is touted as a source of best handling products for stand up jet skis, according to www.prowatercraftracing.com. 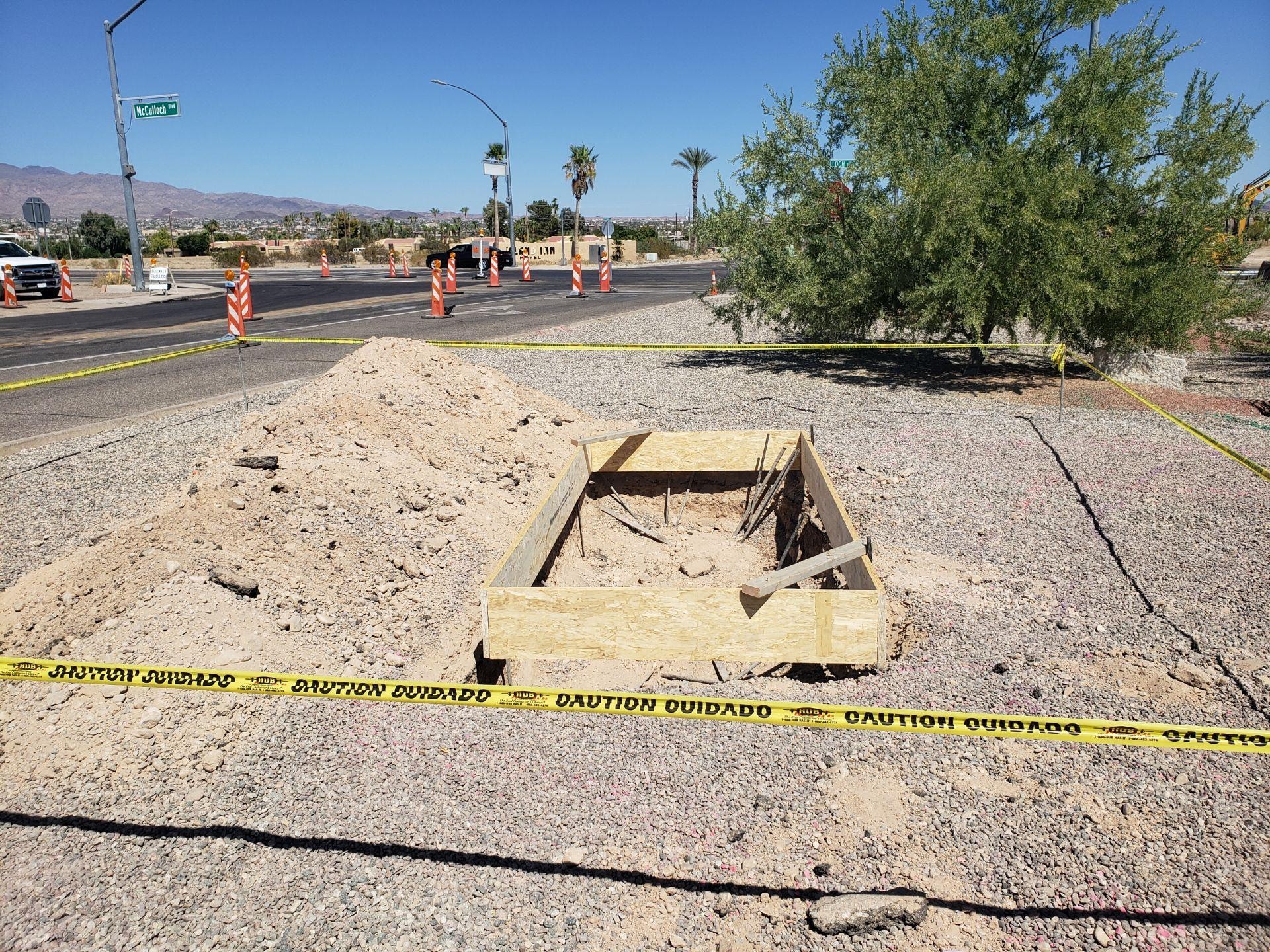 Photo of where monument will be place courtesy Chris Hagest

In an email, Hagest stated that the monument is a way of continuing the legacy of how important Havasu is to the PWC community in that it is a hub of innovation for the PWC industry and lifestyle.

The Facebook page called “PWC monument in Lake Havasu City” has information about how to get involved, how to donate, or how to contact project coordinators.

There are fundraising merchandise options for the PWC Monument’s ‘I Made History’ swag that includes buttons, water bottles, hats, and T-shirts. The merchandise ranges in price from $10 to $500. The project’s fundraising goal is set at $15,000.

A fundraising merchandise page can be found here. 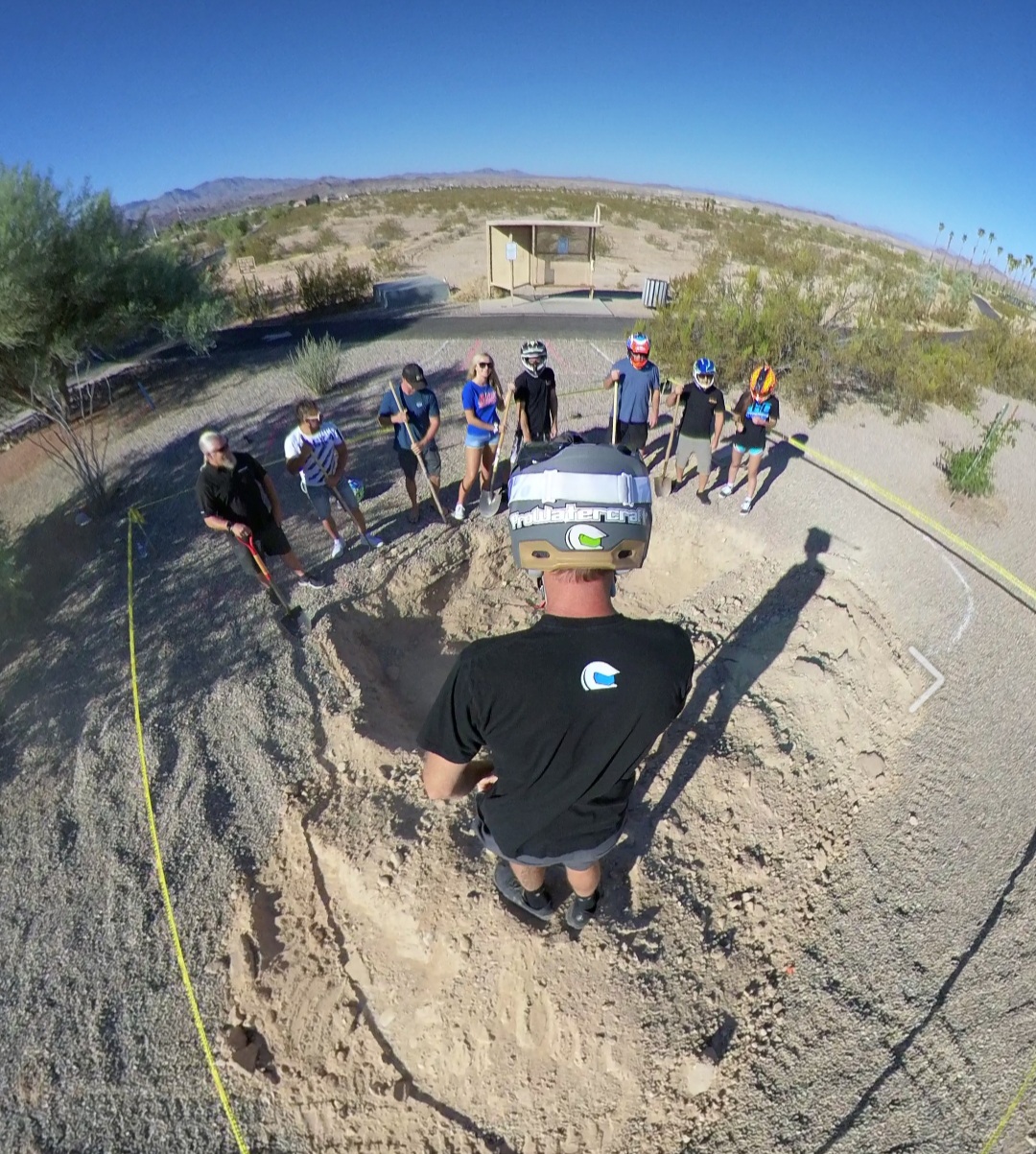