In February, Lake Havasu City welcomed four new pickleball courts to Dick Samp Memorial Park, located at 1628 Avalon Ave. The official opening of the courts has been anticipated by local pickleball players, as well as seasonal visitors for quite some time. The master plan for the court area in Dick Samp Memorial Park includes an additional 12 courts to be installed over the coming years — accommodating more games, more tournaments. and more fun.

Pickleball is becoming increasingly popular throughout Arizona, as demonstrated by the impressive turnout at the Dick Samp Park courts dedication event and their steady use since the opening. Before these courts were available, pickleball enthusiasts were limited mainly to the Aquatic Center. 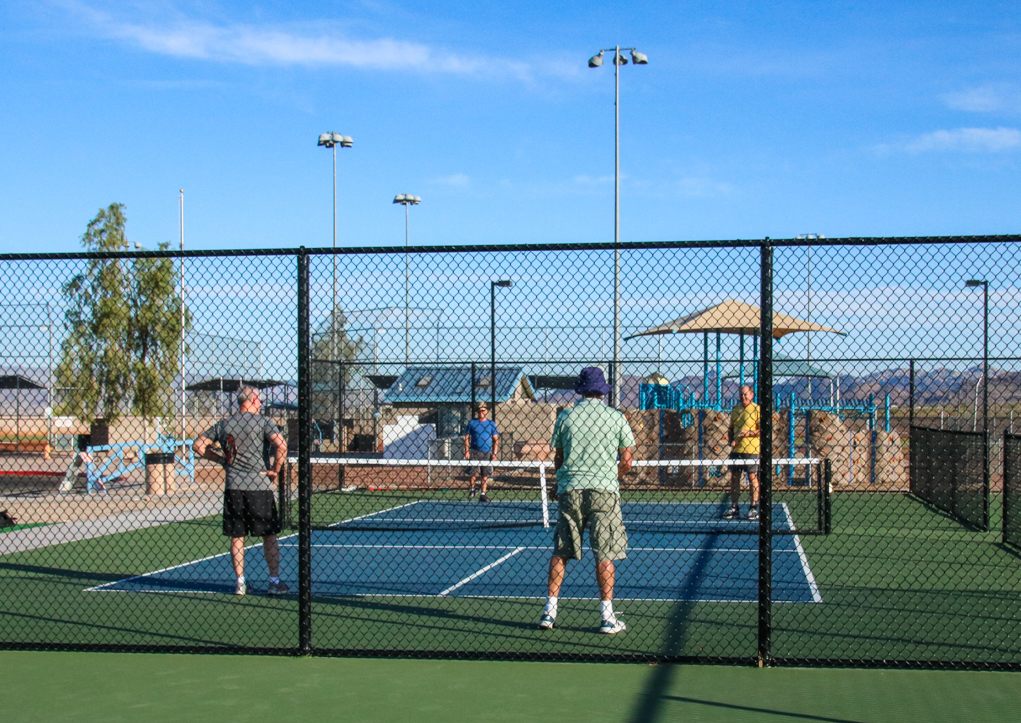 Pickleball can be described as a hybrid sport — it’s a combination of tennis, badminton and ping pong and is played with a paddle and plastic ball with holes. Not only is the sport fun, it has many health benefits as well. The sport combines cardio, balance, and agility — it’s low impact, yet fast-paced, making pickleball the perfect sport for seniors and kids alike.

The new courts on the north side of town allow residents and visitors of all ages to exercise, socialize and enjoy Lake Havasu City’s beautiful weather and panoramic views of the lake, mountains, and city.

The Lake Havasu Pickleball Association hosted its first Annual inaugural tourney earlier this month at the new Dick Samp Park courts. A total of 96 players came out to participate in the tournament, which raised money to fund further court development including stands and shade for spectators.

“We’re trying to play as many games as we possibly can before the days get too hot,” said player Lisa Montgomery. “We’re so happy to finally have a nice place to play outside — and the courts themselves are very nice.”

Her doubles partner, Kathy Thompson, said she’s excited to see more new faces out on the courts, learning the sport that she and her friends enjoy so much.

The courts at Dick Samp Park are available for “open play” daily, excluding times that are designated for special events such as clinics and tournaments.

Pickleball is the perfect way to break a sweat, make some friends and learn something new.