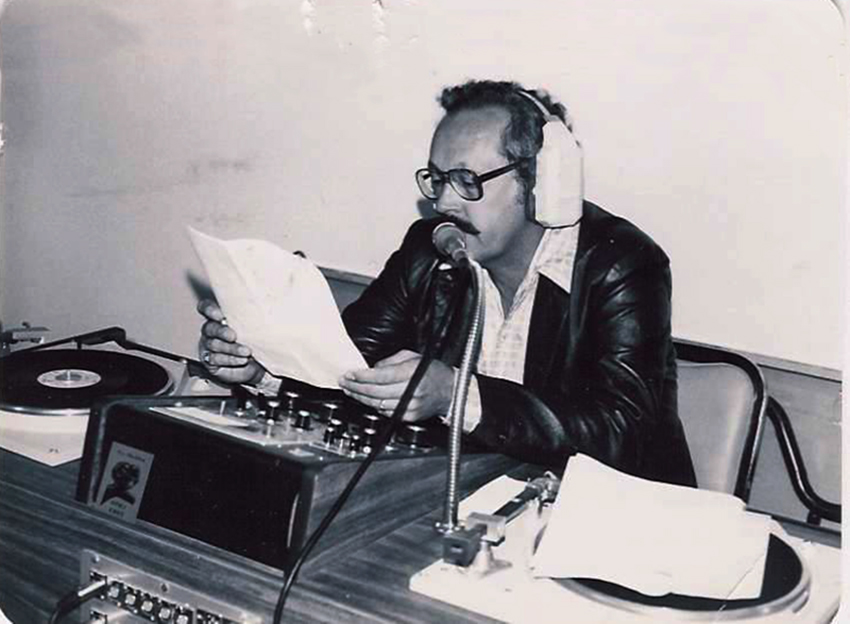 When word of an instant pop-up city being planned and built in the desert of Arizona on the banks of the Colorado River, one Denver radio man heard the news and knew that was a place he wanted to be.

Lee Shoblom relocated from Denver to Las Vegas and began making his plans to launch the first ever radio station in Lake Havasu City.

And on Sept. 23, 1970, he flipped the switch and London Bridge Broadcasting was on the air at KFWJ/AM. The call letters were an anacronym for his syndicated radio show “Kash From Walt Johnson.” The rest, as they say, is history.

Shoblom – aka Captain Radio – built a legacy in Havasu that endures to today. Shoblom sold the company to Mad Dog Wireless Inc., in 1997 when he retired. Along the way in 1984, TV 45 also became a staple for Havasu folks to get their local news and public interest stories. 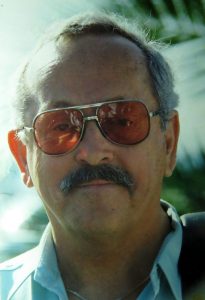 Recently, a photo of one of the broadcasting company’s other stations – KBBC/HOT 101 – popped up on a Facebook page and brought memories to many who had worked there over the years. KBBC went on air in 1974.

“Lee Shoblom brought the hottest hits to the river. He was a lot like Casey Kasem. A great American disc jockey and always cared about the youth in town,” said Lindley Diskin who worked at the station as radio sales manager. She is now at JACK/FM.

Rod Lockman, who also worked at the station, said, “You cannot talk about the success Lake Havasu has achieved without acknowledging some of its pioneers of which Lee Shoblom sits on that list. He was passionate about bringing information and entertainment that radio could bring to a fledgling community. If there was anything going on in the community, you heard it on one of Lee’s stations and a good amount of time Lee would be the host of whatever it was. As an employee and friend, Lee and his family were always Havasu first.”

Anitra French recalled her days at the station. “It was a long time ago, but I think I worked for HOT 101 from about 1993ish-1997ish. I started out as an office assistant after school and a weekend weather girl on the Rick Dees show,” French said.

French recalled she was promoted to the position of an afternoon disc jockey after she graduated from high school.

“My most memorable moment definitely has to be when I was in labor at the hospital, about to deliver my first child, and into my birthing room walks Simon Sanchez with a huge cell-phone (in 1995 cell phones were the size of a rolled-up yoga mat) he was on the phone with Terri who was live ON AIR and they put me on the phone to “check in” on me. I was pretty high on pain meds and I’m not sure exactly what I said but I’m sure it was funny at the time,” she said. Terri Shoblom Watt was French’s God Mother. 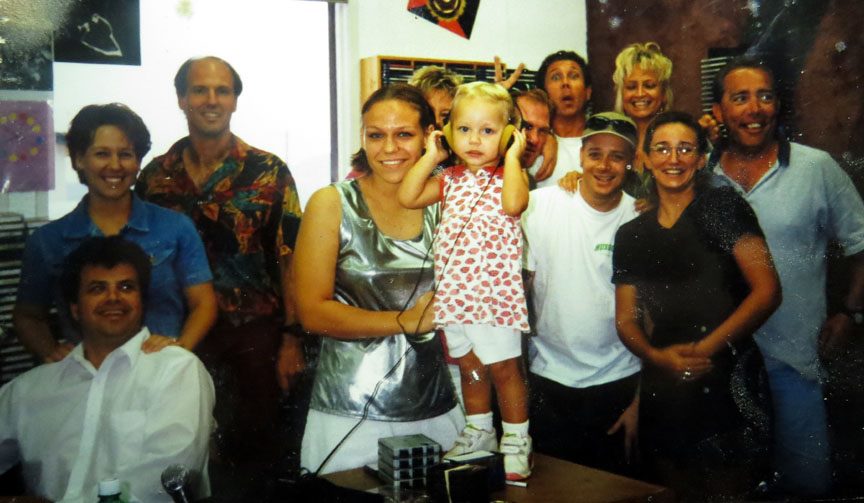 “Another funny moment was when Lee Shoblom was removing the vinyl record players from the main studio and I happened to be working the booth. He was walking out carrying one of the monstrous machines and said, ‘This is the end of an era,’ to which I replied ‘Yeah… the dinosaur era.”

French’s skills transferred to her high school experience as well. “Because of my semi-professional training at HOT 101, I competed at the state Vocational Industrial Clubs of America (VICA) for radio broadcasting in high school and won 2nd place for the state. In high school both Simon and I were part of the TV productions class which broadcast the morning announcements and Channel 1 news. The class was later changed to TV and Radio productions and we were able to get a small powered radio station installed at the high school. I can’t claim credit for that, but I’d like to think my involvement helped. I have no idea what became of the radio station after high school,” French said

She did not pursue a career in radio, but she has co-hosted a couple of podcasts and sometimes is a guest on other podcasts.

“I loved my radio days,” she said.

“I quickly moved to remote broadcasts all over town for various businesses like Sofa City, All American Battery, Kokomo and Reflections.

“I would say about two years into working there, I started the Morning Show and that’s when I was really able to be involved with so many great community events and projects. Lee Shoblom and Terry Watt were great at always including us with what was going on around town,” Sanchez said.

“There were so many memories that I can’t possibly name all of them but the two that stood out most was when I did a ‘live’ skydive for Memorial Weekend with a cell phone taped around my hand. Also, when MTV came to town, it was a week of backstage concerts, interviews and being a part of shows like ‘The Grind’ and ‘Singled Out,’ he said. 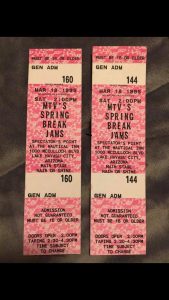 “I loved growing up in Havasu in the ‘80s, it was a wonderful time as a kid with the way the community always came together. London Bridge Days was a magical time for me because my parents and my sister always participated with the Moose Lodge to create floats to be involved in the parade. It was definitely a great sense of community and pride.”

Sanchez now lives in Las Vegas and works for radio stations off and on while running a DJ and marketing company.

“I miss Havasu and need to visit more often. I guess I never knew Havasu’s true beauty until I left for a while. I want to thank Lee Shoblom for giving a kid a chance and giving him one of the best jobs I’ve ever had. Man we had some fun. Thank you,” Sanchez said.

Chris Want worked at the station in the ‘80s.

“I started work for Lee Shoblom in 1984 when the station was KFWJ doing mid-days,” he said.

“When Sean McMaster was hired on as program director, he beefed up the format and we became HOT 101. Doing remote broadcasts was massive fun with Sean,” he said.

Want recalled one remote in the middle of summer at Dominos Pizza.

“We had people drive by and encouraged them to hit us with super soakers. At one point, there were so many people in attendance the police came by and advised us to stop,” Want said.

“Spring Break with MTV was off the hook.”

One memory that stands out for Want was the following. “Once in December, I did a parasail ride where I was going to pull a quick release and float down onto the Nautical beach. A gust of wind took me into the lake – did I mention it was December?”

After HOT 101, Want did mornings on the KNACK then left radio. “I am now following my other passion. I am the owner/operator of a firearms safety training company in Lake Havasu,” Want said.

Over the years, the radio world that Lee Shoblom built has been an asset to Lake Havasu City. Fundraising, covering events and bringing news and music and fun to the residents from the early beginnings helped grow the city.

In a recent call in to the “Speak Out Havasu Pioneers” radio show on KNTR Talk Radio, Shoblom called in and recalled some of his memorable moments.

He said, “It’s easy to be number one when you are the only one.” And he was indeed the first one.