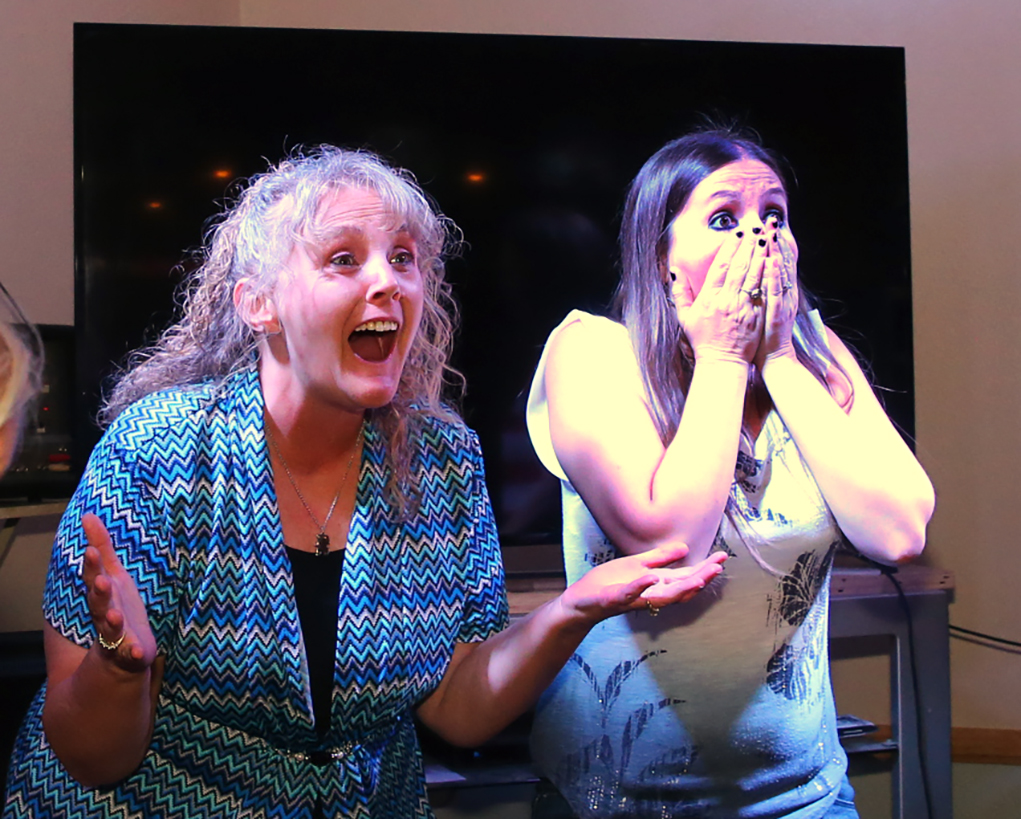 U.S. Army Sgt. Justin McShane has been stationed in Germany for the past three years. When he returned to Lake Havasu City Wednesday, it came as a complete surprise to his family … and that was by design.

McShane reached out to the American Legion to help plan the surprise homecoming and it went off without a hitch. 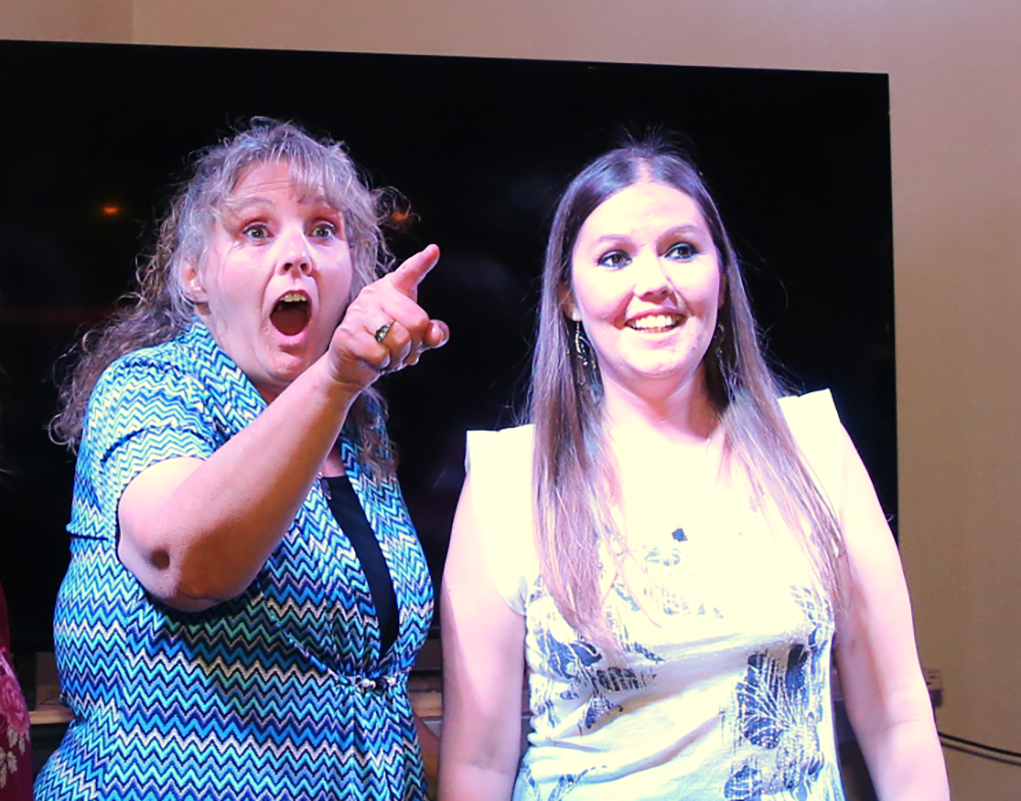 Sgt. McShane’s mother, Sherry Jones and sister Cassie O’Hara spot him coming through the back door to suprise them at the American Legion. Sgt. McShane has has not seen his family in three years while being stationed in Germany. Jillian Danielson/RiverScene

“Coming from most patriotic town in the world,” McShane said it only felt natural. “I’m really excited about it I didn’t think we’d get such a big turnout. Everybody did an awesome job and I couldn’t thank anybody enough. I was excited ‘cause I finally got to surprise my mom. She’s always gotten me,” McShane said.

“I’m Justin’s big little sister. He’s like 6 foot I’m barley 5-foot 2. I’m feeling ecstatic that my brother is home. It’s been three years since I haven’t seen him on the phone,” O’Hara said. 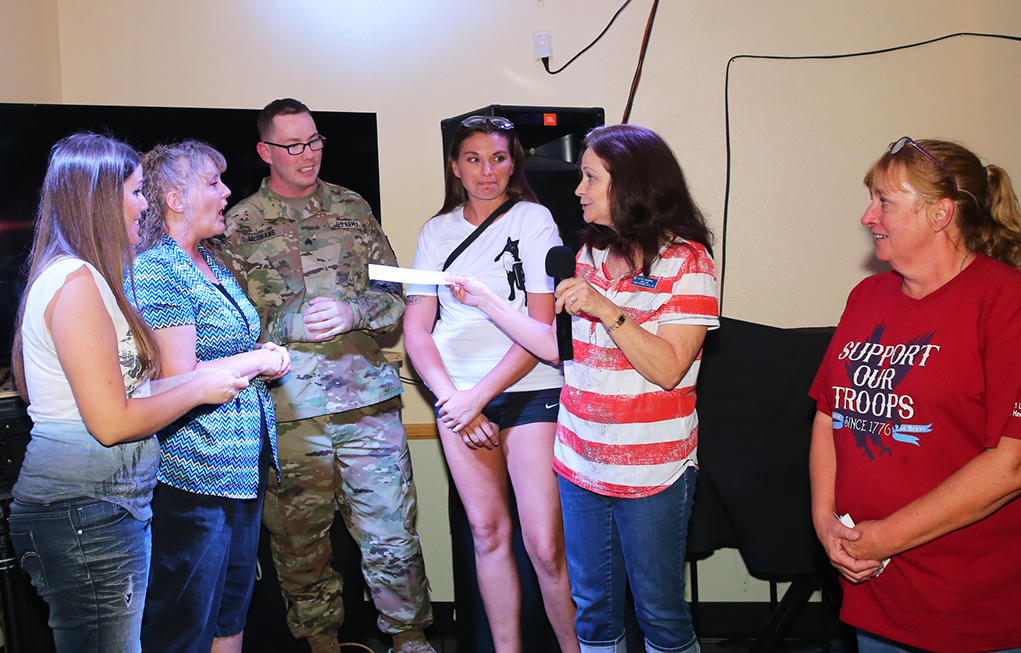 “I thought I was coming to talk about my favorite nonprofit in town and maybe share a tear or two. I was in shock. Just in shock when he walked around the corner. I was like is that my brother? Mom, it’s my brother! My mom is ecstatic too,” she said.

O’Hara said they are a close family and the youngest sister had worked to put the surprise in motion.

“My sister … the littlest of us three, kept a secret for seven months. How she did that I don’t even know. I don’t know how she did that.” 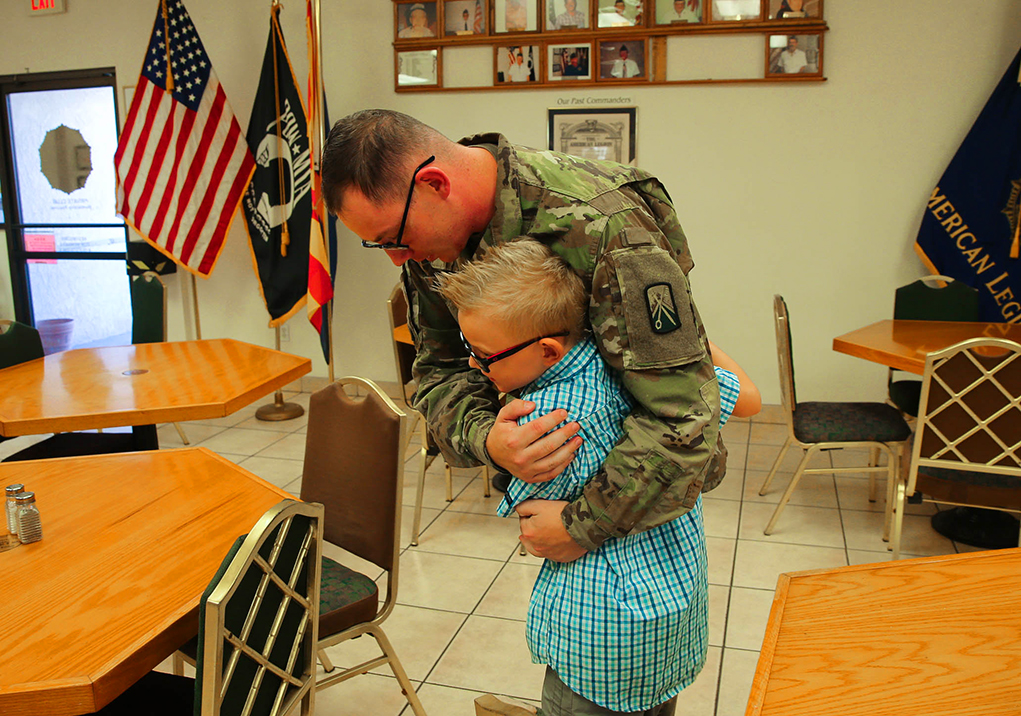 Sgt. McShane’s son, Faolan, hugs his dad after not seeing him for three years due to deployment overseas. Jillian Danielson/RiverScene

Sherry Jones, McShane’s mom, was surprised. “I am absolutely thrilled that he came home and surprised us this morning. I came down to talk about Mile Markers (Therapy) and we were so surprised to see him walk around the corner,” she said.

Jill Richeal is the American Legion manager who worked with McShane to plan the surprise homecoming.

She said she was put in touch with McShane to begin working on the surprise. “This has been the greatest privilege of anything I’ve ever done,” she said.

“When we first started talking about it, I thought we could have her down for a military mission and he said, ‘Oh, no. If it’s military she will know something’s up.’ Then he said Mile Markers was something she cared about, so I contacted Mile Markers and we worked together,” Richeal said.

Racheal said she didn’t release names to the American Legion Post until the last minute because she didn’t want to ruin the surprise.

And the surprise was complete and successful with another military family reunited. 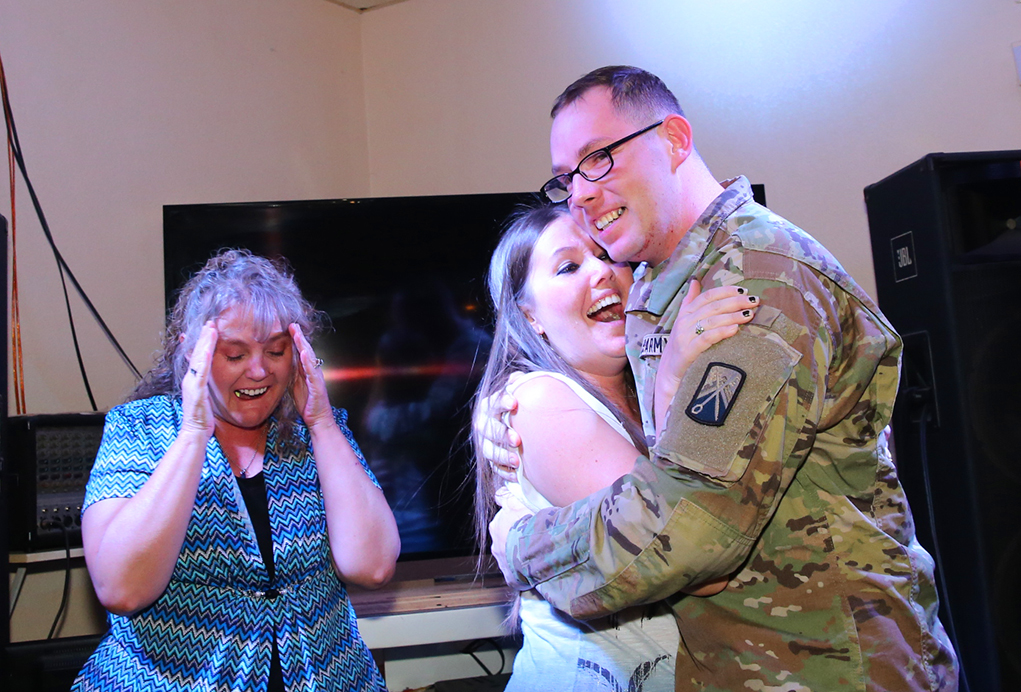 Cassie O’Hara hugs Sgt. McShane after he suprised her and her mom Wednesday evening at the American Legion. Jillian Danielson/RiverScene 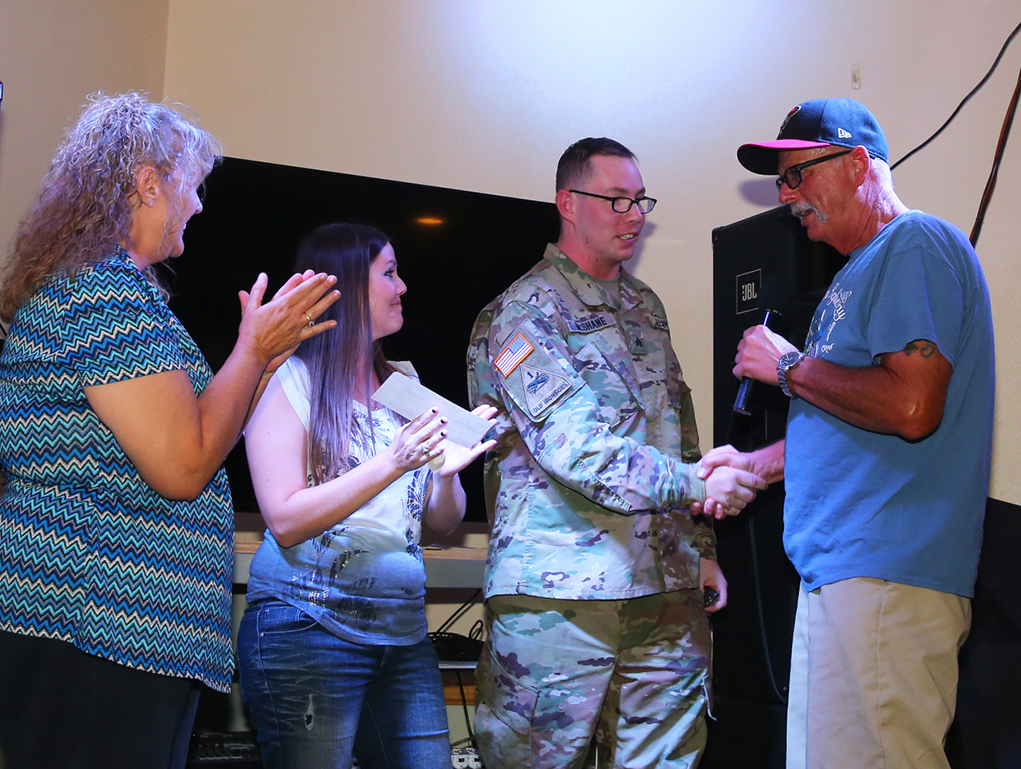 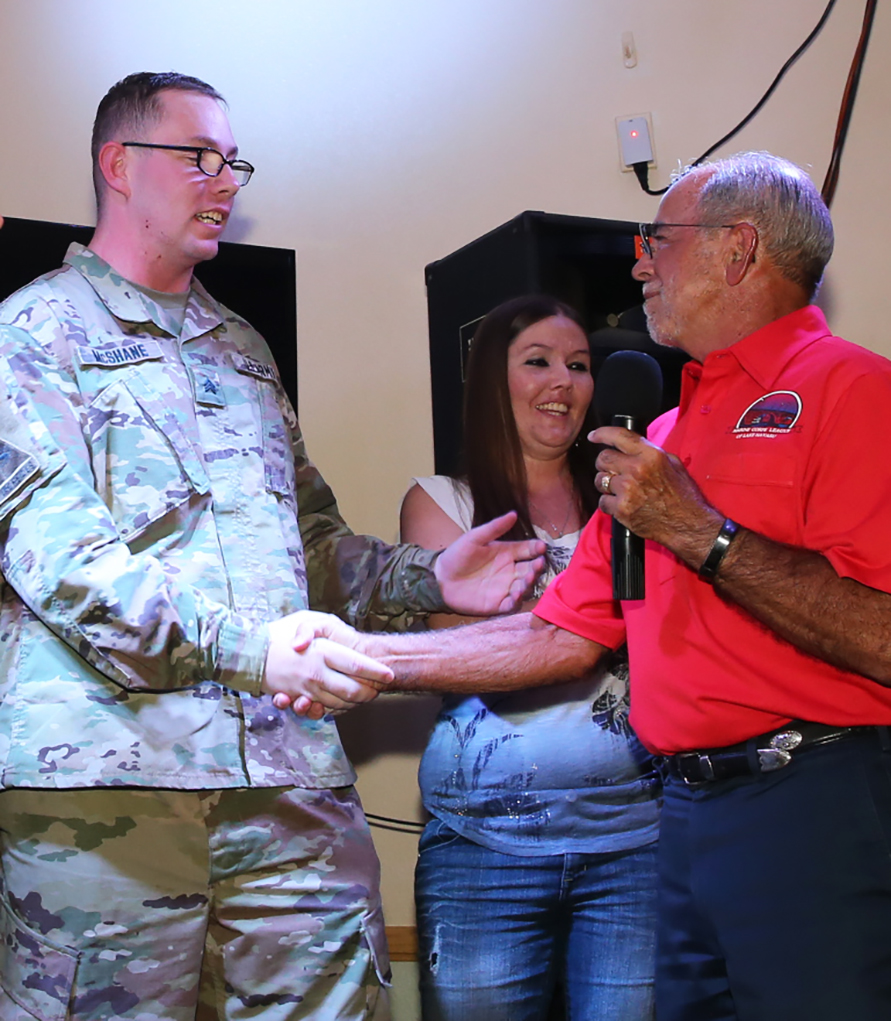