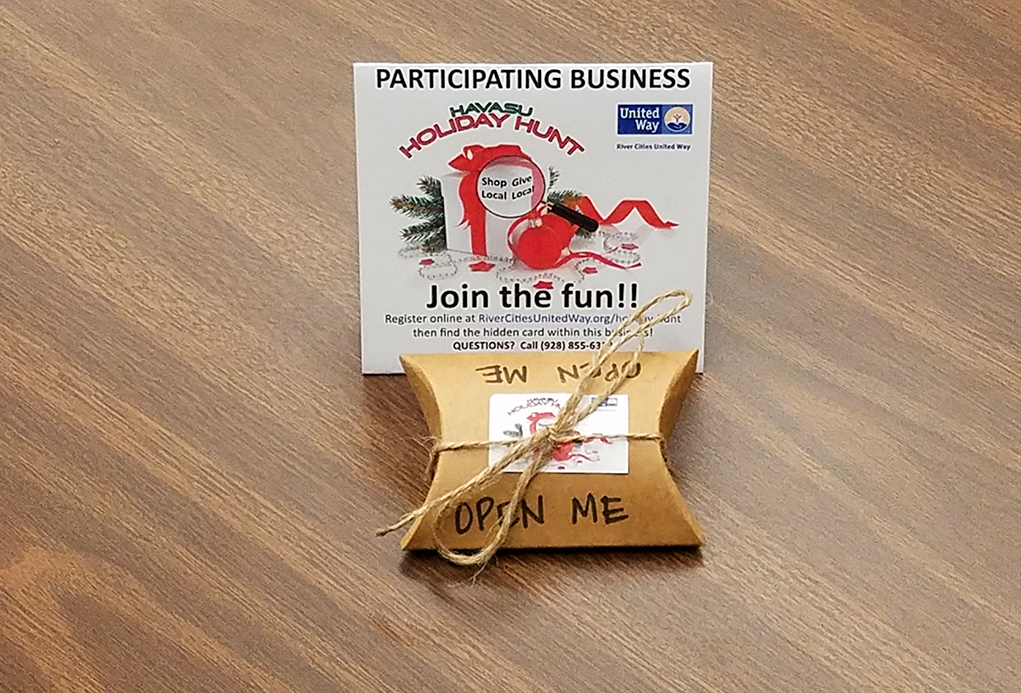 The River Cities United Way is exploring a new way to drum up some foot traffic when it comes to its donors while fundraising during its inaugural 2016 Holiday Hunt, which began Dec. 1.

“For me, one of the appealing things was, that one of the hardest demographics to break into is the mom and pop businesses, there are cost barriers for them sometimes when donating,” said Lyn Demaret, president/CEO of River Cities United Way in Lake Havasu City.

“Everything donated is a gift of some sort,” Demaret said. “There are items, gift certificates for services and food, indoor and outdoor accessories, and clothing.”

To participate in the Holiday Hunt event, the rules are simple. A $20 donation to River Cities United Way gets each participant a somewhat secret list of participating businesses. Participants then visit the business location and seek the small hidden Holiday Hunt card within. If found, bring the card to River Cities United Way at 145 N. Lake Havasu Ave., in Havasu, to redeem the prize. Prizes range in value from $25 to $75. Only registered participants may win.

The fundraiser has had local United Way staff working about six weeks to organize it. The inaugural event is designed to increase foot traffic into the local businesses included in the fundraiser, drum up funds for Havasu’s United Way, and spread a little cheer around the community during the excursion.

“One of the things we are really focusing on is to shop and give local in conjunction with the Lake Havasu Chamber of Commerce, they were helpful in getting the word out about this,” Demaret said.

Participants also may register for the event online at rivercitiesunitedway.org/holiday-hunt.