Rotors In The Desert

With that announcement, Lisa Emmons went into action. Desert Skies Executive Air, located at the Lake Havasu City Airport, was expecting the first of three waves of military helicopters on Monday, and Emmons was prepared for them. The U.S. Army First Cavalry from Ft. Hood, Texas, was returning from two weeks of training at Ft. Irwin, Calif., and stopping to refuel in Lake Havasu. 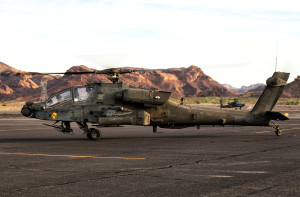 “They always stop here to refuel,” Emmons said. “They love us here because we treat them well. Subway always donates breakfast for them, and we have water and sometimes cookies ready for them. We treat them like family.” Indeed, when the crews entered the office, many of them gave Emmons a big smile and a hug.

Emmons said she has no official title, but she seems to have a variety of jobs. She fields phone calls, monitors incoming air traffic, and when one private plane landed and didn’t know where to go, she dashed outside, waving her arms to direct the pilot to a parking spot.

Jeff Gardner is Desert Skies’ general manager. He’s been with the company since 2004, before Desert Skies owner Mike Harrah, a helicopter pilot himself, purchased the company in 2007 and moved it from the Island to its present location at the airport. Gardner is everywhere at all times, putting out fires and making sure everything runs smoothly. When the helicopters begin to land, Gardner jumps into a cart and drives out on the tarmac to bring the crews in for breakfast. He is joined by Bob Johnson, line manager, in another cart to help bring the crew members in. 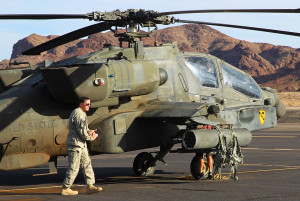 “I’ve been dealing with the military since I started here,” Gardner said. “They call in to say they’re coming in for refueling. We’ve had as many as 43 helicopters arrive at a time. Sometimes they have mechanical problems and we’re able to take care of their needs.”

Gardner wasn’t in the military himself, but many in his family served.

“Two of my uncles were two- and four-star generals, my father was in the Navy, and I have a nephew in the Air Force.”

Emmons said the Army stops for refueling once or twice a month, sometimes less frequently, on their way to and from training at Ft. Irwin or elsewhere. “We’ll get a call from them maybe the day before they come to refuel, and Subway makes sandwiches for them. But sometimes we don’t know they’re coming in until they call when they’re almost ready to land. If they have mechanical trouble, we can usually help them. One helicopter pilot was here for a month while his aircraft was being worked on.” 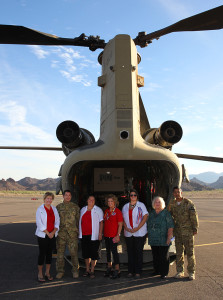 Emmons said they have become so close to the crews that they often send Desert Skies videos taken while they’re out training.

From the west came a faint thump, thump, thump that got louder as five Apache helicopters and a Chinook approached. In formation, they circled the airport and landed one by one, their rotors whipping the air around a small group of Lake Havasu City Military Moms. They had heard only the night before about the crews coming in, and a half dozen members were able to be on hand to welcome the crews to Lake Havasu.

About an hour later, another four Apaches and a Chinook landed. One Apache and a Blackhawk were delayed because of mechanical problems. Still later, the third wave of eight helicopters was expected.

All helicopters were fueled, and crew members fed, hydrated, and sent on their way back to Ft. Hood until the next training date and their next stop in Lake Havasu. 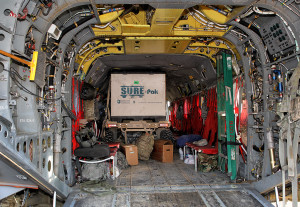 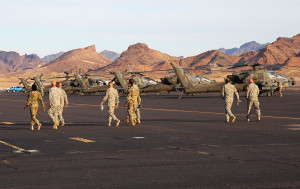