Run for the Wall Veteran Supporters Ousted From Overpass 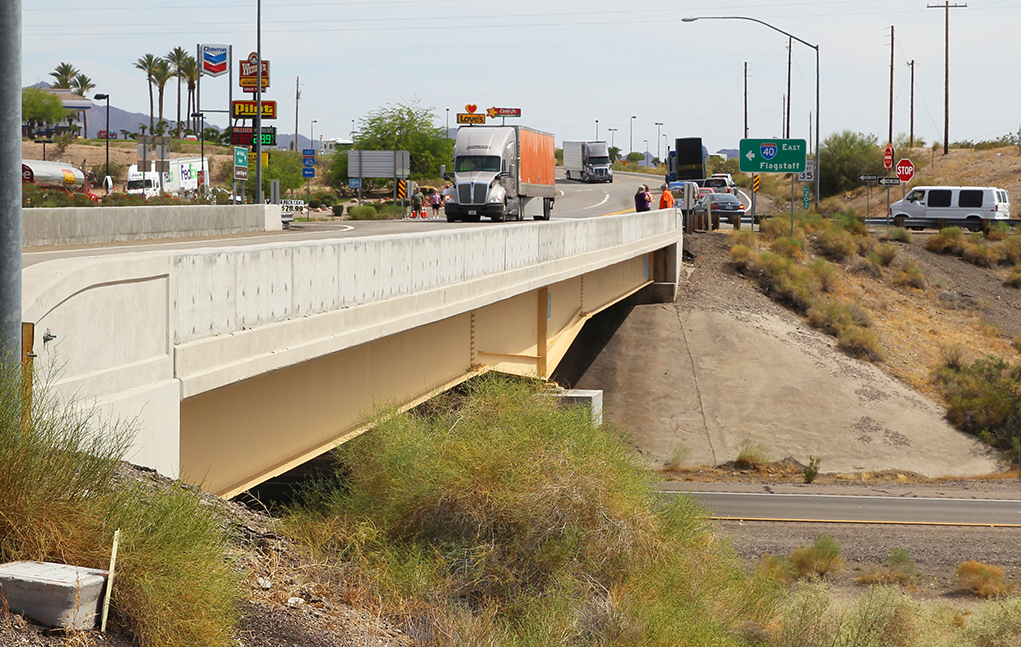 Lake Havasu City residents gathered on the I-40 and Hwy 95 overpass Wednesday to show their support for veterans riding motorcycles from Ontario, Calif., to Washington, D.C.

Run For The Wall has made the journey since 1989, and Lake Havasu residents have been going out on the overpass for the past 10 years to show those veterans their service was appreciated.

But this year, those supporters found something else on the overpass: Arizona Department Of Transportation employees and Department of Public Safety Highway Patrol personnel. 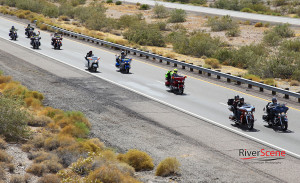 Run for the Wall Veterans make their way along I-40 as they do every year to head to Washington D.C. Jillian Danielson/RiverScene

Two of three RFTW routes pass by SR 95 on I-40. The Midway Route stopped first just before noon for fuel, and were greeted by about 50 residents. Three hours later, the Central Route passed the same spot, but would not stop until they reached Kingman for fuel and lunch.

Before 3 p.m., residents began arriving, carrying American flags and signs proclaiming “Welcome Home” and “Thank You for Your Service.” They walked onto the bridge as they do every May, 10 days before Memorial Day, when RFTW passes through the area. But Wednesday ADOT employees were there to warn them to stay off the bridge. Residents were told they were not allowed there without a permit that includes a $3 million insurance policy. 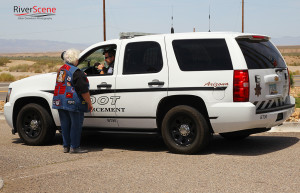 Some of the supporters left; others decided to go to the next exit at Franconia Road. When additional supporters arrived at the SR 95 overpass, however, they chose to ignore the order to leave, some telling the ADOT employee they felt a duty to show their support for veterans who risked their lives for their country. They walked past the ADOT employee and took their positions on the bridge.

Another ADOT employee arrived and ordered everyone off the bridge. No one budged. The employee eventually told everyone they could not stand still, that they must keep moving. The group of about 25 people did keep moving — back and forth across the bridge.

Sisto Sandoval, who served in the Army in Vietnam in 1968 and 1969 in both Tet Offensives, was carrying a large Vietnam flag. He became visibly upset when told to get off the bridge.

“I’m not going to get off the bridge because I’m here to honor those who brought me home and those who didn’t come home,” Sandoval told the DOT employee. “These riders are taking my message to The Wall. Fifty-eight thousand didn’t come back, and a lot of them were my friends.” 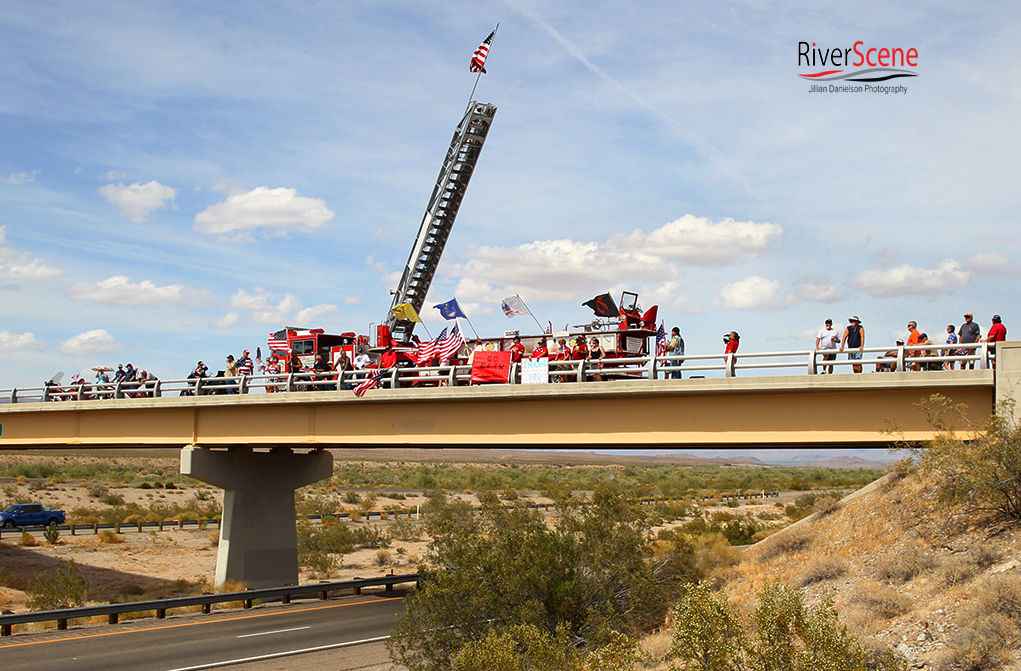 Some supporters drove to Franconia Rd to stand on that overpass to continuing supporting the Run for the Wall. Jillian Danielson/RiverScene

“Here they come!” someone shouted when the motorcycles were spotted in the distance, and the group stopped and began to wave flags and hands. Sandoval held up the Vietnam flag, which was instantly recognized by most RFTW riders, as the majority of them are Vietnam veterans. More than 200 motorcycles passed under the overpass, in two precise lines, most of them waving back in appreciation of their supporters. Trucks running alongside of the motorcycles honked at the supporters in recognition of their efforts.

Will Harvey, of Lake Havasu City, said, “We’ve become too successful and have so many people coming out to the overpass to support the veterans that it’s becoming a safety issue. I understand ADOT’s position because that overpass has so much truck traffic,” Harvey added. “We might need to look at continuing to meet the Midway Route at the gas station (at I-40 and Hwy 95) but moving the Central Route crowd from that overpass down to the Franconia exit.”

A request for comment from ADOT was not answered before  publication. 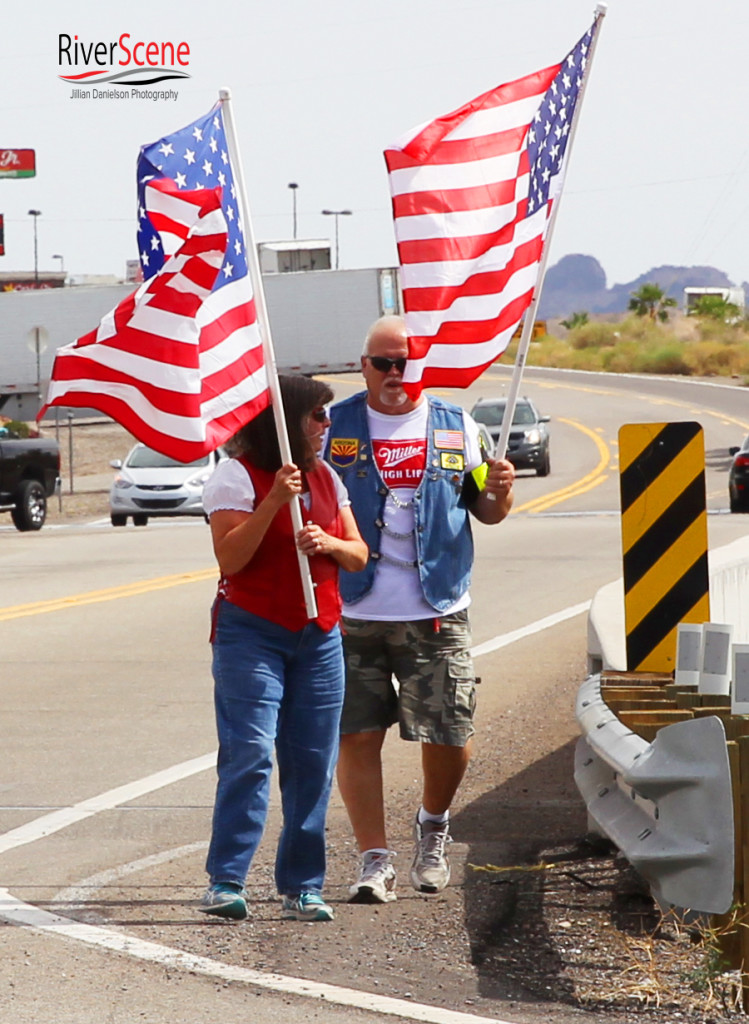