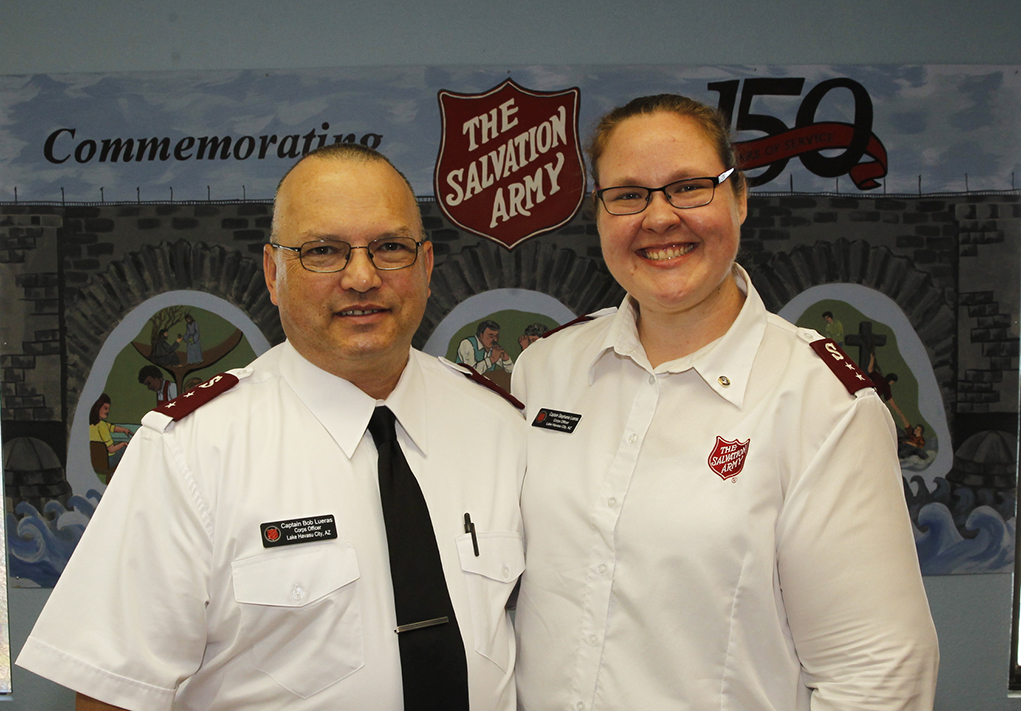 This comes at an atypical time of year for moves of Salvation Army officers, but as the Luerases have reiterated before, officers are moved based on their individual skill sets and the needs of a community, and nothing is ever set in stone. They said it is with heavy hearts they will no longer reside in Lake Havasu City, but the good news is that they will remain a part of the city through their work as area coordinators.

The Salvation Army will still operate its full gamut of social service programs under the direction of local staff, and the Family Store will remain open. The mission of The Salvation Army remains strong in that people in the community will continue to be served in Christ’s name without discrimination and the Christian atmosphere of love will always be maintained.

The only difference coming is that without corps officers, there will be no functioning church programs, and the Luerases will be working diligently to partner their congregation members and spiritual program participants to local churches that will be able to meet their needs in the coming weeks.

The social services office will remain at its current location at 2049 Swanson Ave.

The Luerases said the decision was not an easy one to make, but in looking at the model of other nonprofit organizations in this region that run on a tri-city model and the long-term viability of the small church that was being maintained here, it is the most fiscally responsible decision to make moving forward to be good stewards of what the donors in Lake Havasu City intend The Salvation Army to do – to help people in need.

This service center model allows The Salvation Army to eliminate some overhead expenses and reallocate more money toward direct assistance. In looking over the proposed fiscal year 2018 budget, Captain Stephanie Lueras said she is very happy to see that the level of social services that The Salvation Army will be able to provide in Lake Havasu City remains solid, and in their position as River Cities Area Coordinators they will have the responsibility to ensure that this happens and keep the local staff accountable through their connection and presence that they will maintain with Lake Havasu.

While these are some very big changes that will have a positive impact on the level of social service assistance, there is nothing that changes in terms of funding and how The Salvation Army of Lake Havasu City serves those in need.

When a donor contributes locally, those funds stay local to help people in our community. The Salvation Army Family Store also depends on donations of material goods and patronage to return profit that also funds the local Salvation Army social services. Nothing changes in that respect.  Lake Havasu City has always been generous and supportive of The Salvation Army and the Luerases said they hope the community can continue to be just as reliable in this time of transition.

The Luerases will be readying this process of transition over the coming weeks, and the last worship service for The Salvation Army of Lake Havasu City will take place on Aug. 27, at 9:45 a.m., before they depart to their new home in Laughlin. They openly invite discussion and visits with questions and comments regarding the restructure, transition, what their role will look like in Lake Havasu City, etc.

Reach them at The Salvation Army at 928-680-3678 or Stephanie.Lueras@usw.salvationarmy.org.