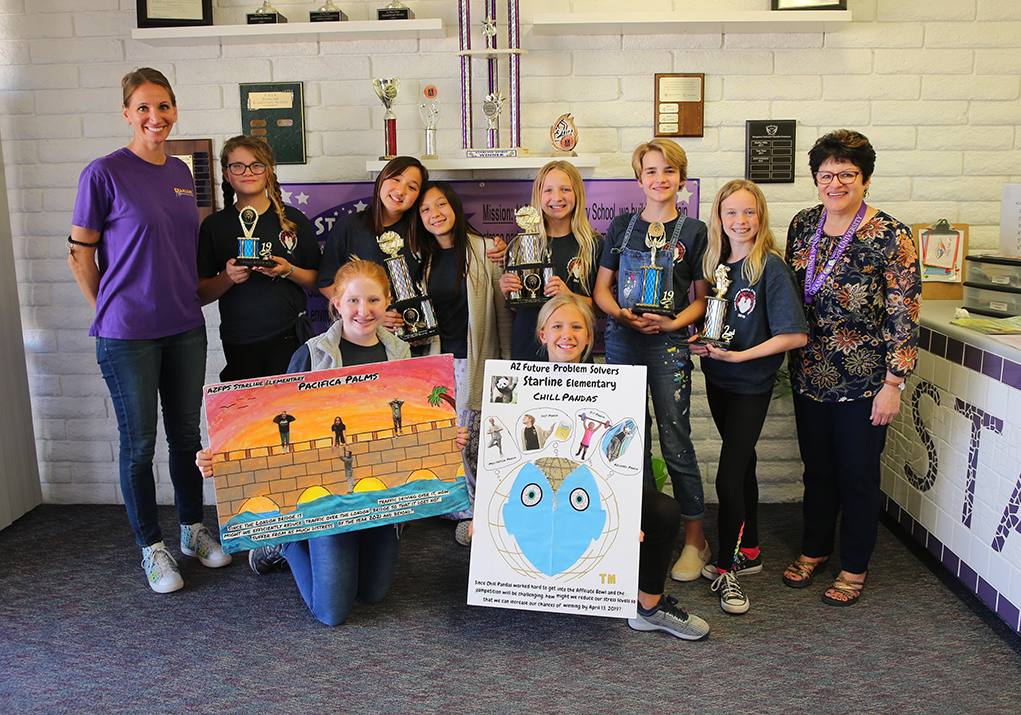 Four of Starline Elementary School’s brightest students are set to advance to a national competition after prevailing over at least 10 other Arizona teams during a recent state competition at Arizona State University’s Tempe campus.

“It was really cool for a first-year coach and first-year team to compete at this level – and we won,” said Bridget Hagest, who led the students.

The two four-student teams, of Lake Havasu City, competed in the junior division comprised of fourth- and sixth-grade students. Havasu’s teams were: The Chill Pandas, and The Pacifica Palms.

It was The Pacifica Palms who snatched the first-place overall honor in the junior category. The triumph advances them to the Future Problem-Solving Program International, 2019 International Conference, national competition. It is set for June 5-9 at the University of Massachusetts Amherst.

“The topic is de-extinction, so, think Jurassic Park,” Hagest said of the national competition, “What’s so cool, is we represent the state of Arizona, from little Lake Havasu. We will fly across the U.S. to represent Arizona. I think that’s so cool.”

“It just felt crazy that we could do that,” said Keely Lam. Calico Nickel said it was “awesome” and Natalie Butch called it “nerve-wracking and very exciting.” To wrap it up, Shelby McGregor said the win was “overwhelming.” 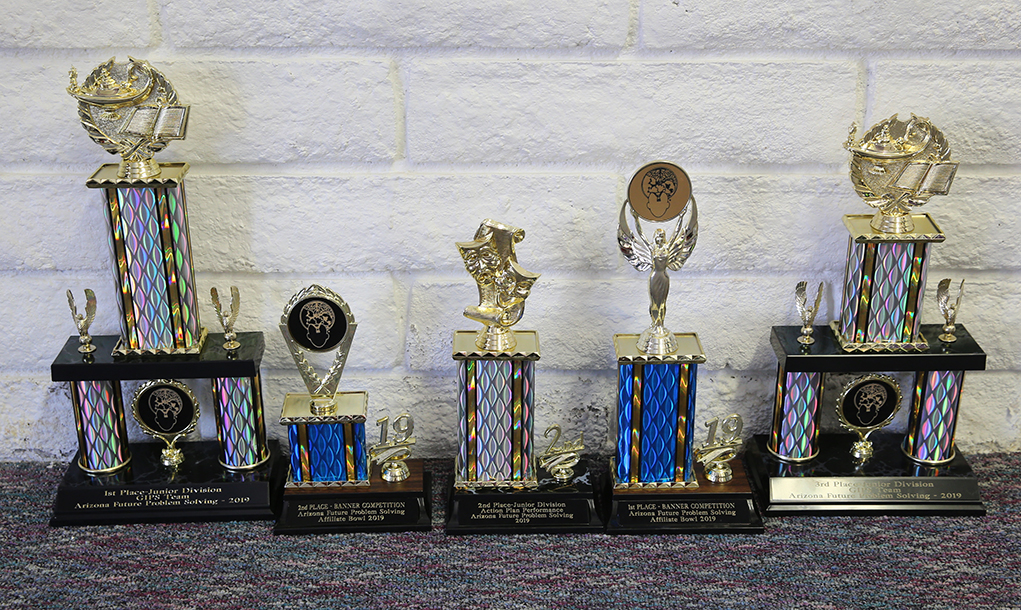 Trophies from the competition. Jillian Danielson/RiverScene

“It was so much fun,” said Emma Trejo. Elle Troffer agreed with her comment of “lots of fun.” Marley Francis said is was “eu-stressful” which she learned, through competition research, means ‘the good kind of stress’, and little Courtney Bartlett humbly said the experience was “unforgettable.”

Categorically, The Pacifica Palms followed The Chill Pandas’ with second-place for banners.

The Arizona Future Problem-Solving Affiliate Bowl hosted at least 20 teams, all of Arizona, April 13, in divisions of novice, junior, middle and senior. Each division is judged on categories including banners, a two-hour problem-solving and writing project, and skit.

The 17-hour whirlwind of events began about 4 a.m. that day for the Havasu students when the bus departed Havasu. The Pacifica Palms, The Chill Pandas, and Hagest were the participants who travelled the furthest distance to compete.

The banner category was followed by the problem-solving and writing competition, which was the premier category of the competition. The teams collected their packets which each contained a future scene. They had two hours to apply a six-step problem solving strategy ultimately resulting in viable solutions. Competitors work from identical packets, which differ by future problem only in division.

“The topic was stress,” Hagest said, “So, for six weeks before the competition, we’ve been studying everything and anything about stress; what causes it, what it does to the body, how it affects brain function, and coping strategies.”

The last facet of the competition was a 90-minute exercise during which the team prepares a two- to four-minute judged skit.

“It teaches kids how to think, not what to think,” Hagest said of the competition as a whole. “It’s stuff that doesn’t exist. It’s teaching them how to be problem solvers. It’s all creative thinking.”

According to earlier Riverscene Magazine reports, Hagest’s entire class of 39 students participated in the pre-research phase for the state competition. It was amid an in-classroom process that the identified top students who scholastically earned their place on the two teams that traveled to compete in Tempe.

These competitions are extra-curricular and beyond the financial confines of Hagest’s classroom. In short, there is zero school funding that is earmarked for this endeavor. If anyone is interested in donating funds that would help cover costs for the upcoming competition, please contact Starline Elementary School at 928-505-1490.

Hagest estimates costs to be roughly $900 per each student, plus herself. The amount includes flights, transportation to and from the University of Massachusetts Amherst, and food and lodging on that campus for the days they’ll be in attendance there.