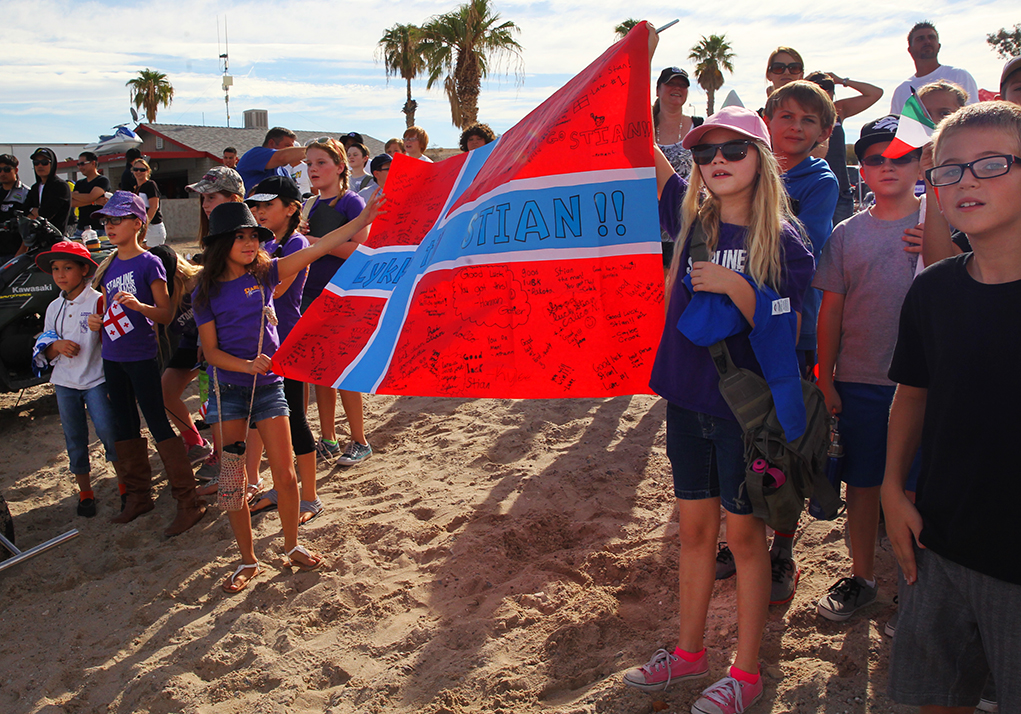 Starline teacher Nancy Blythe’s third and fourth-grade gifted students joined Starline teacher Bridget Hagest’s fifth and sixth-grade students for the adventure. Hagest said she has made four other field trips to IJSBA in previous years. This year was Blythe’s first. 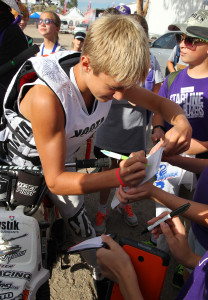 The visit to IJSBA is part of an international research project during which the students pick a country, research it and prepare a report beforehand. The trip to IJSBA for photos and autographs adds to the project.

“The real goal is to introduce them, to meet the riders from the countries they’ve been studying,” Mrs. Hagest said. “The kids are super excited. They’ve learned to say ‘good luck’ and ‘hello’ in different languages.”

In class, the students work about 30-40 minutes most days. Then, there’s homework. Each student selected their country from a list comprised of countries representing riders who have regularly attended IJSBA.

Display boards of their findings have been prepared. Photos, autographs and IJSBA race memorabilia will be added to the mix. The boards will be presented at Parent Night the final week of October.

“It’s been an ongoing project,” Mrs. Blythe said. “This has been a great learning experience. It’s made them so much more aware of the world.”

Thursday’s student agenda included touring the IJSBA vendor alley and the pit area before watching a few race heats from shore. A walk back through the vendors would provide shopping time for the students. 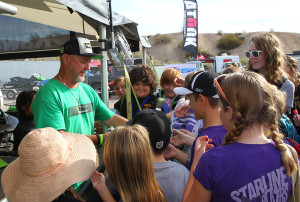 Along the way, students displayed and waved mini flags from several different countries. They paused at the Vintage Jet Ski Museum. Next, they collected “Team Green” stickers doled out at the Monster Energy/Kawasaki vendor tent.

In the racer pit areas, students were greeted by racers from France, Poland, Thailand, United Kingdom and Portugal. The racers provided time for autographs and photo opportunities with the students.

Hannah Gottier, local sixth-grade student, chose Great Britain for her project. Her dealings with the team members who are in town for IJSBA were memorable.
“They’re really nice,” Gottier said. “They gave me a shirt.”

The most interesting fun fact Gottier learned about the country during her research included animal passports, and a very odd law about alcohol consumption.
“All horses, ponies and donkeys have to have a horse passport to travel,” Gottier said. “And a 5-year-old can legally drink alcohol at a private house or on private property.”

Kaylynn Jeleso, local fifth-grade chose Canada for her project.
“They have the most Olympic medals in the Winter Olympics,” Jeleso said.
The field trip was a hit in her opinion. 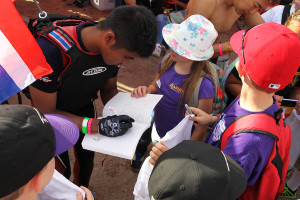 “It’s got the Eiffel Tower in it,” Matzdorff said of his research subject.
He, too, thought the field trip was a hit even though he said he’s attended IJSBA before.

“I think it’s an awesome experience,” he said.

Amid the tour, IJSBA racers battled it out during a series of heat races to determine their advancement in full-class races, and later Last Chance Qualifying races Thursday morning.

Thursday afternoon, the IJSBA moto races would begin, according to a race schedule provided by IJSBA race officials Thursday morning. The motos provide the racers further advancement by way of a point system. The points determine who races. And who will be the next IJSBA world champion.

For more information, visit www.ijsba.com or follow them on Facebook, it’s the one with the lower case letters, race officials said. 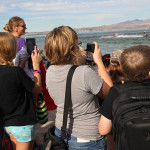 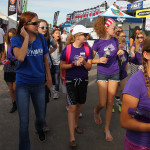 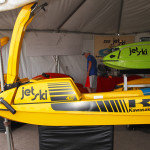 A jet ski is displayed in the vintage jet ski museum that the Starline students got to tour. Jillian Danielson/RiverScene 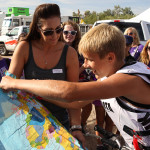 Kacper Kania, of Poland, autographs a map for the Starline students. Jillian Danielson/RiverScene 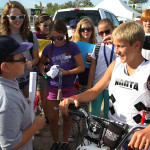 Jesse Richardson, who is studying Poland at Starline, talks with the racer from Poland, Kacper Kania. Jillian Danielson/RiverScene 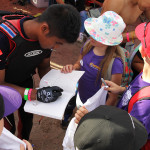 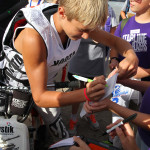 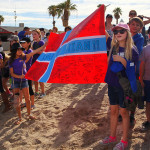