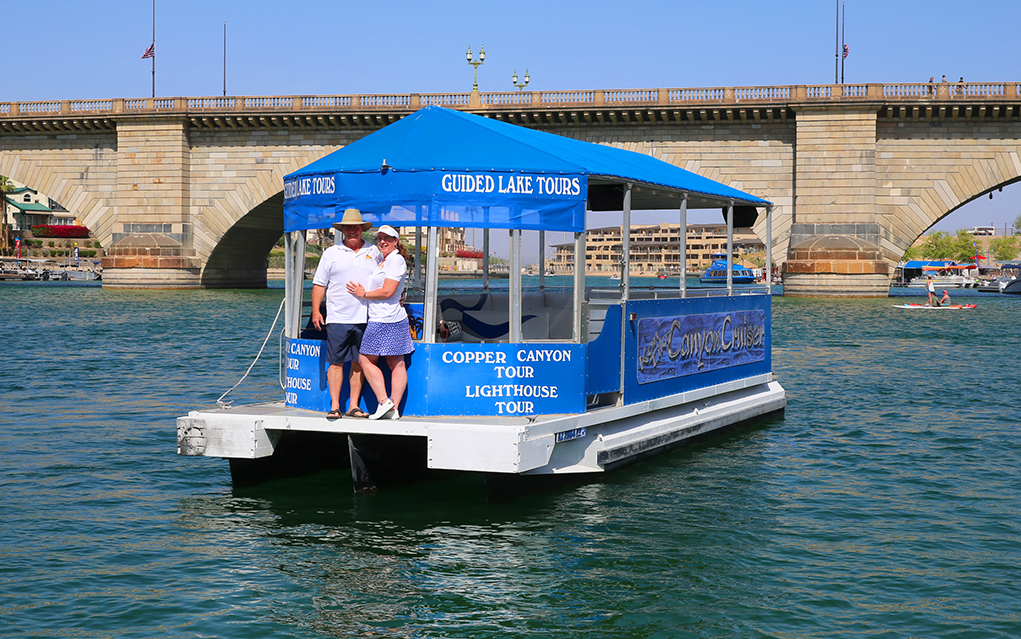 Some longtime Lake Havasu City residents may take for granted all the things that make this community special. With its rich history, gorgeous landscapes and the diversity of the people living and visiting, Havasu has earned its status as a top destination spot in Arizona.

There are so many things to see and do, but one absolute must is booking a boat tour of the lake and river with Sunset Charter & Tour Co.

The lake and the famous London Bridge are arguably the focal points of Lake Havasu’s charm and beauty and should be experienced by anyone and everyone, but especially in the experienced hands of Captains Kenny and Janene Samp. This duo of longtime friends turned partners in business and in marriage own and operate the Sunset Charter & Tour Company and make a living sharing the wonder of the city with tourists and locals alike. 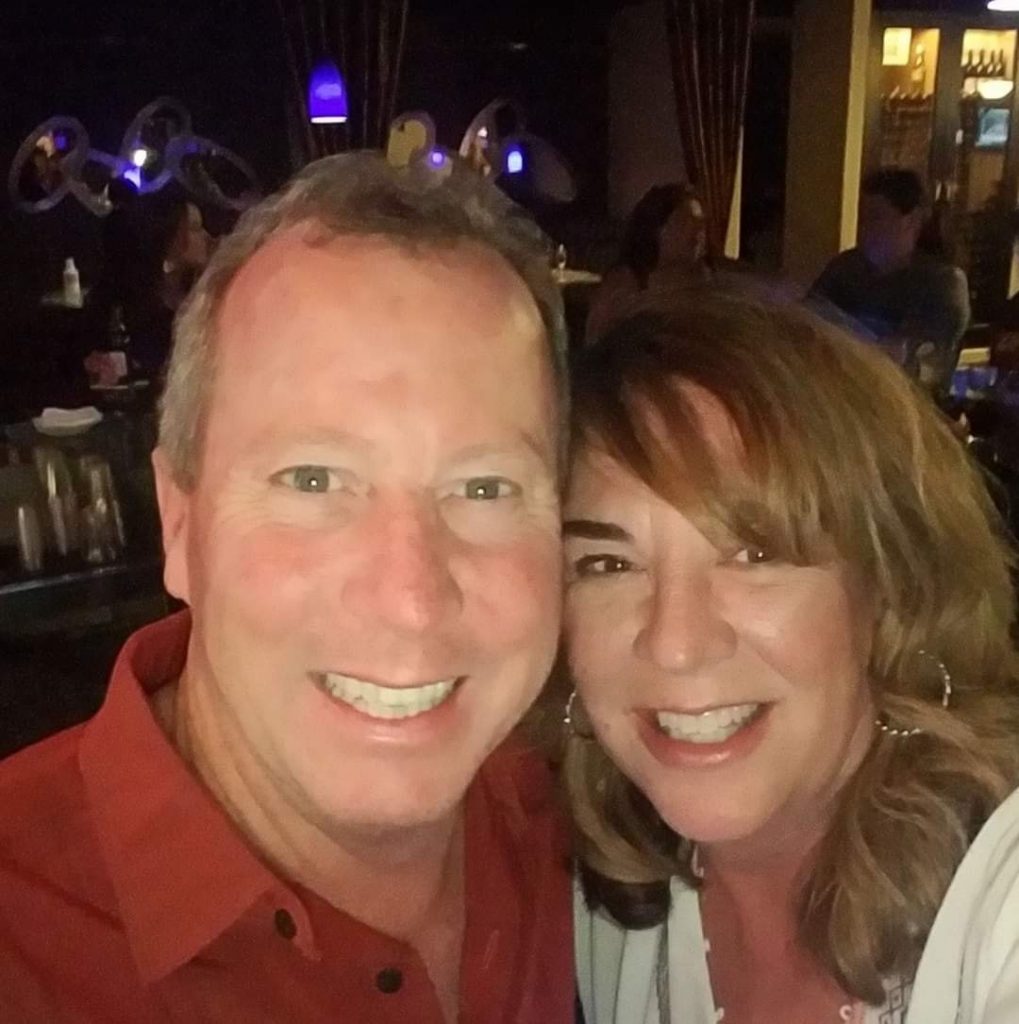 Kenny Samp and his family have called Havasu their home since 1976 and he met Janene here just a few years afterward. The two were friends growing up in this fledgling desert oasis before Janene moved away 1989. But fate would see the two brought together again following a class reunion. “It was like an instant connection,” Janene recalls with a smile. “The rest is kind of history, right?”

The beginning of Sunset Charter & Tour Co., is intertwined with the Samps’ rekindling their friendship and falling in love. Kenny had just begun to establish the company when he and Janene came together, merging their skills to create something quite special.

Janene believes that, “It was a perfect fit professionally and personally. And we said, ‘Let’s build this business together.'”

For Kenny, working on the river simply made good sense. His family vacationed here for the water sports and recreation, and after making the move to Havasu when Kenny was 11, they remained connected to the lake. The family also grew roots in the city by owning and managing the bowling center for 25 years and Kenny’s father Dick Samp is best known as the very first parks and recreation director in Lake Havasu. They sold the bowling center business in 1999 and Kenny says he, “Traded my bowling ball in for a boat!”

Kenny began renting boats for the water sports center at the Nautical Inn for six years, and realized, “I didn’t want to rent boats. I wanted to take people out and share the experience, share Lake Havasu with them. I had this idea one night sitting on the company boat after we shut the dock down out in Thompson Bay – how nice it was and how peaceful and serene being on the water with the stars. The feeling I got from it was really, really special and I wanted to share it with others.”

For about three years, he bounced the idea of a boat tour company off of family and friends before finally building the vessel Serenity Now, a six-passenger, open-air pontoon boat with stadium seating and individual captain’s seats that rotate 360 degrees and a restroom. The Serenity Now is completely custom, with Kenny having worked with local companies In Stitches Customs and Sharq Skinz to accomplish it. 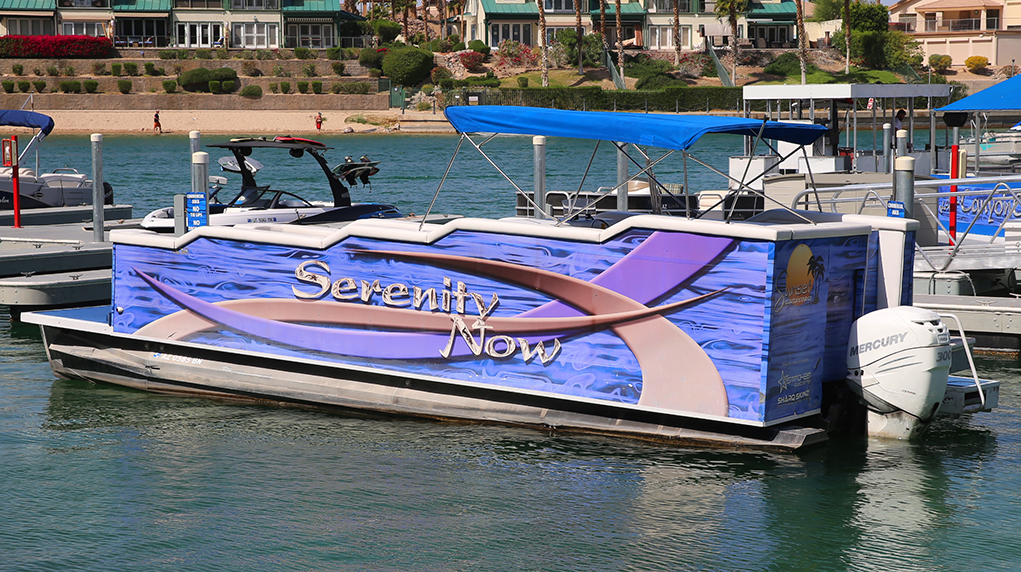 With the vessel built, Kenny got a foothold in with the London Bridge Resort, who allowed him to pick people up and drop them off on their dock for the first three to four years. Then he and Janene were brought together again and they bought the long time river boat, Kon Tiki and refurbished it, adding Canyon Cruiser to its name. Now that they had two boats in their fleet, they expanded the touring program from a couple to five different tours and they have been building on that, running strong for the past 10 years, largely thanks to Janene’s hospitality experience as well as both the Samps’ intimate knowledge of the city.

The touring company features a three-hour long sunset tour on the Serenity Now, which is something of their signature tour. Janene points out that, “It’s really the original sunset cruise here in Lake Havasu. There were no sunset touring options prior.”

This excursion takes passengers 12 miles south through canyons (including Copper Canyon) and coves and is choreographed to the position of the sun and music. Not only do passengers get to take in the breathtaking views, but the Samps also include the history of the areas they travel to, as well as fun facts and observations. 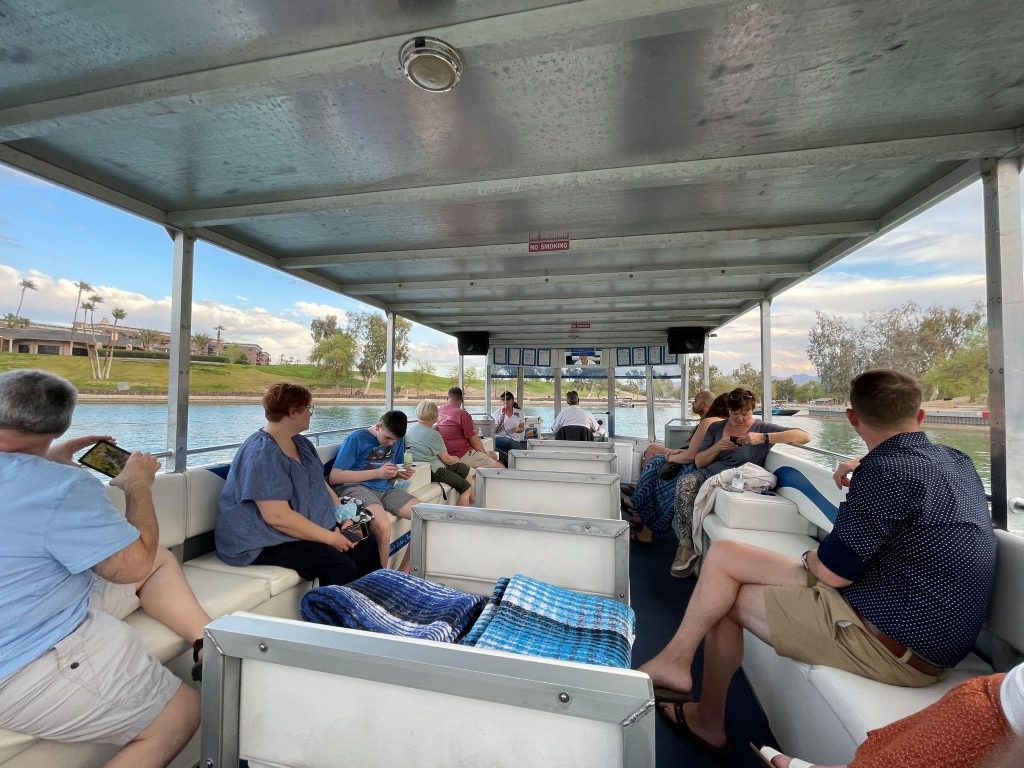 During the summer months, they also feature the Aurora Light Show in Copper Canyon. “It mimics the Aurora Borealis,” Kenny explained, “These high powered lights shine from underneath the boat, into the water and then the light reflects off the water back up onto the canyon walls, so depending on how the water is moving it creates this really neat lighting effect.”

There is also a Topock Gorge Experience every day, four hours up river, 28 miles north, with a picnic lunch on board. This is an area that can only be experienced from the water and the Samps call it the ‘Mini Grand Canyon of the Colorado River. And that’s not all. The creativity and talent of the Samps is not to be underestimated. They also feature a light house tour showing 20 of the 28 lighthouses on the lake, a 90-minute sunset and Copper Canyon/island tour, a 60-minute Copper Canyon daily tour, as well as private charters. They talk about the wildlife that can be seen bustling on the lake and shores either – truly, the Samps have considered every aspect of their business and provide the best product possible for their customers.

Although its name “Serenity Now” comes from a Seinfeld episode, Janene shares that, “It was named to provoke a feeling, a mindset that you can take home with you.” Such care and attention the Samps have given to their business and their tours, creating an ideal experience that one can only get here in Lake Havasu. They are a staple in the English Village and thank Bill Spresser of VRE, the company that manages the village, for the improvements that have been made as well as the careful selection of businesses that operate in the village. 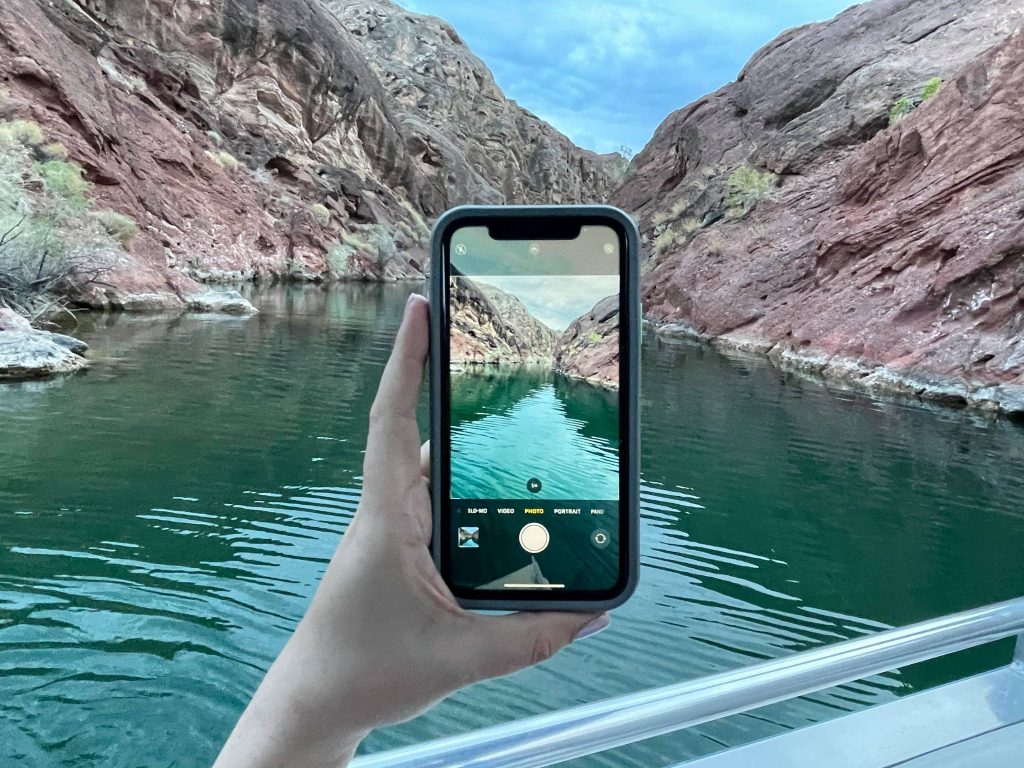 RiverScene staff had the opportunity to take the 90-minute sunset and Copper Canyon/island tour aboard the Kon Tiki Canyon Cruiser with Janene as the guide and narrator. With some facts about the London Bridge and the city of Lake Havasu that even a Havasuvian of 30 years didn’t know, the tour was informative and engaging led by Janene’s natural charm and sense of humor. And it was breathtakingly beautiful during an overcast evening with a striking red sunset.

Passengers took many pictures and selfies along the ride, which was accommodated by our captain who positioned the vessel in any required direction for the perfect shot, with some music to cruise by. Bottled water was complimentary and we were provided freshly laundered, heavy blankets when the chill of the night air began. 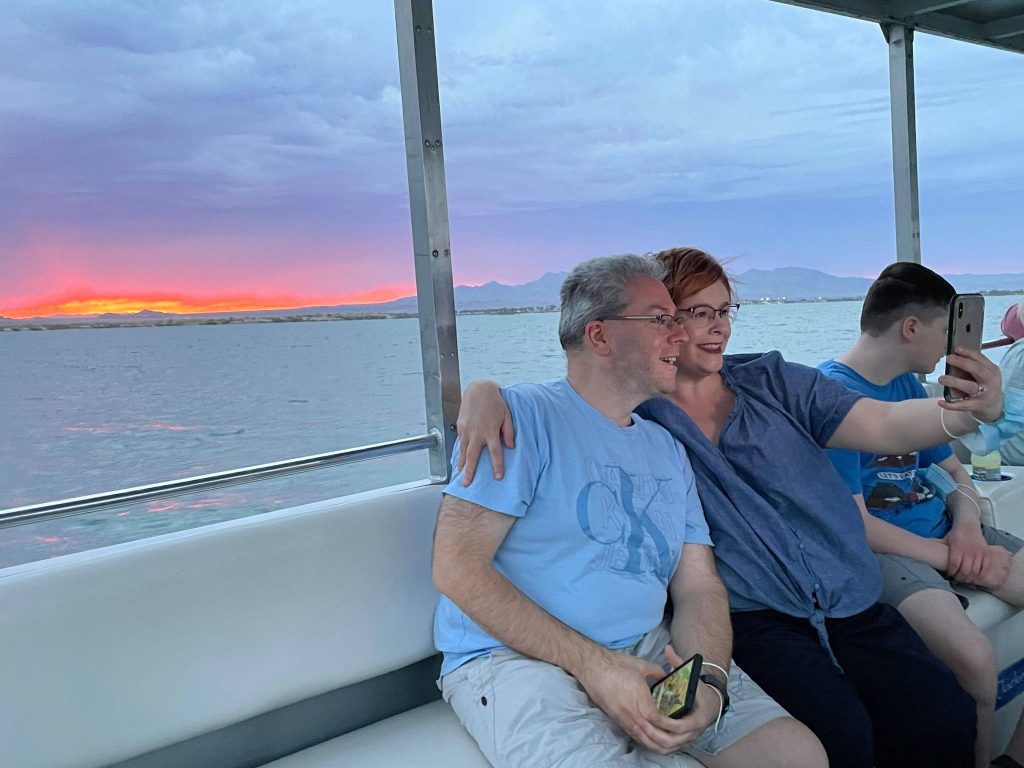 A couple on the sunset tour takes a selfie. RSM Team

RiverScene was curious as to how the Samps keep their tours ‘fresh’ and limit burnout doing the same loops on the lake for their many passengers.

Janene’s answer was a true testament to their love of this city and its residents and visitors. “The minute I step on board, it’s a new thing. Each tour is going to be something different, especially for example the sunset. We can go into Copper Canyon every day and it’s different – the lighting, the colors … It keeps me calm, the beauty of it. But it’s also a different group of people every time, a different dynamic. I really love what we do.”

Kenny agrees with his wife and adds that, “I like sharing it with people that have never been here before, leaving the dock knowing it is all new for them.”

Wanting to book your tour now? Visit http://www.lakehavasuboattours.com to view Sunset Charter & Tour Company’s schedule and pricing. Call them at 928-716-8687. 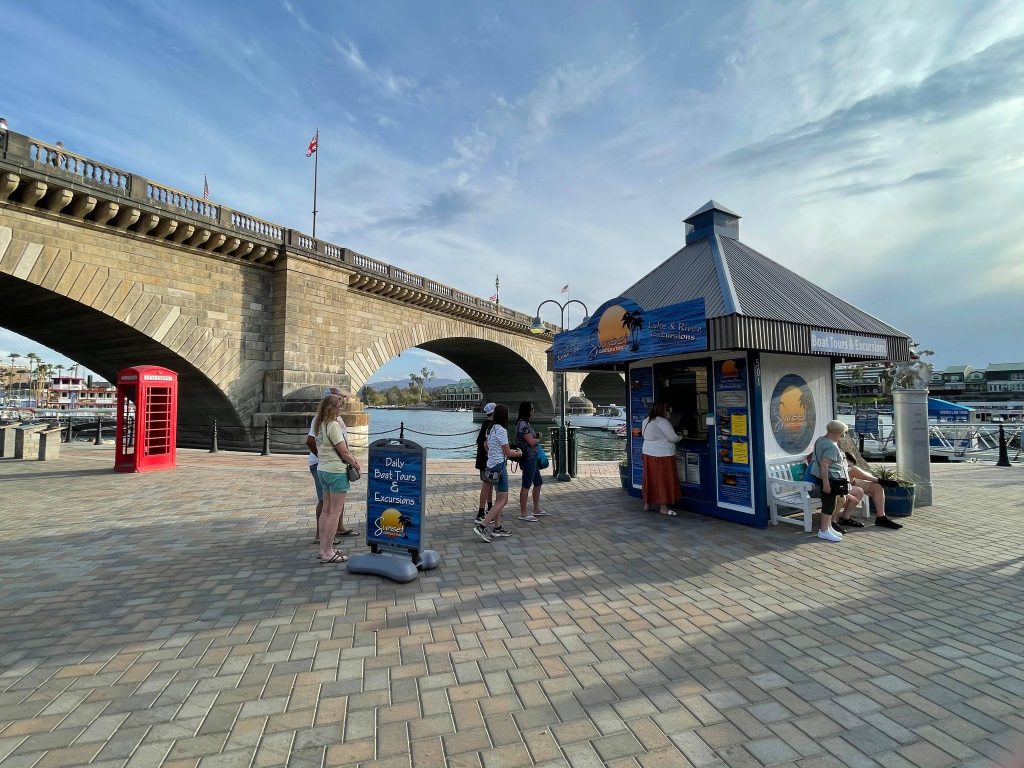 Sunset Charter and tour Co. is set up under the London Bridge. Jillian Danielson/RiverScene 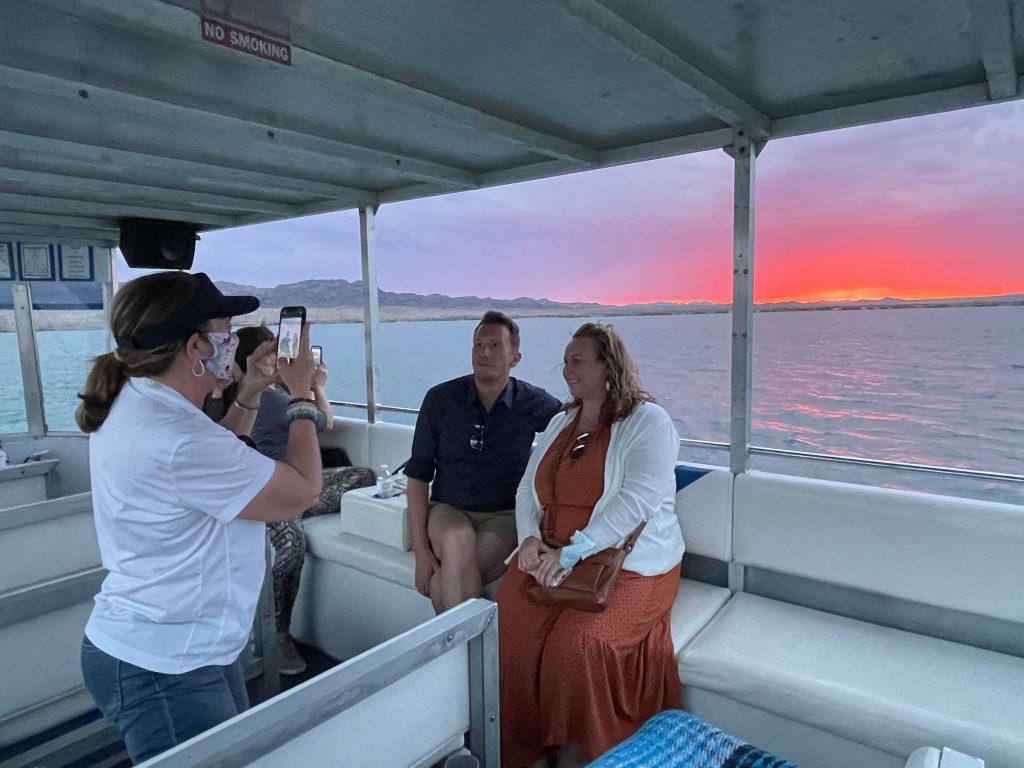 Janene Samp takes a photo of a couple on the sunset tour. RSM Team 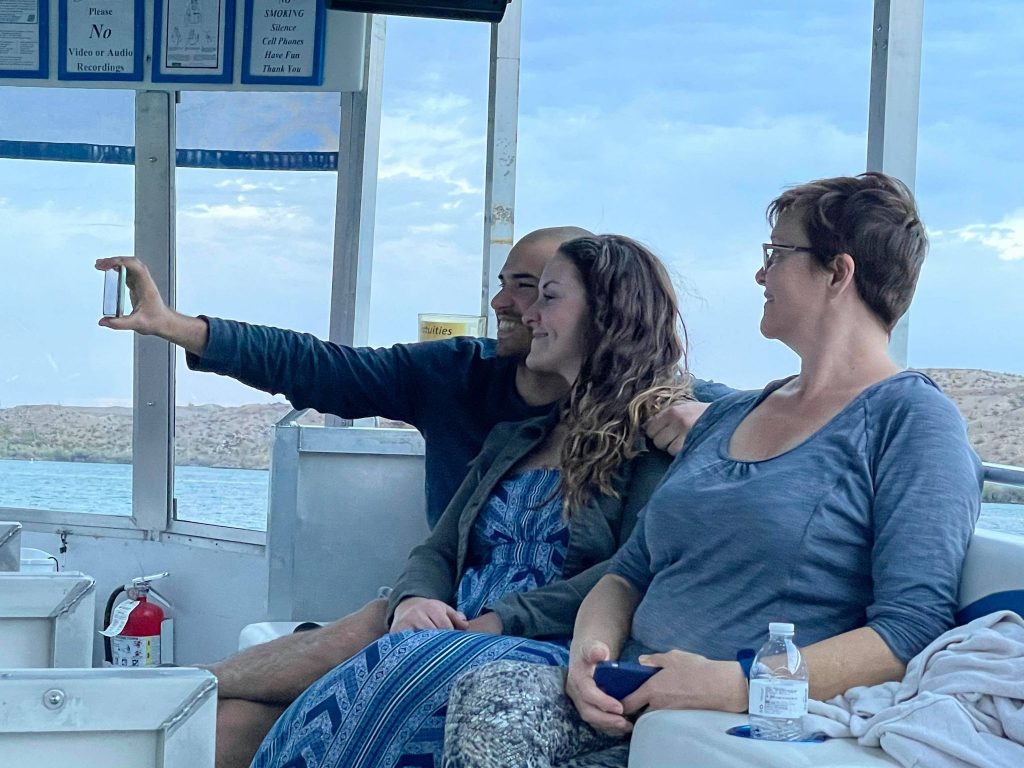 A couple on the sunset tour takes a selfie. RSM Team

Captain Kenny and Janene Samp pose for a photo in front of the London Bridge in Lake Havasu City. Jillian Danielson/RiverScene