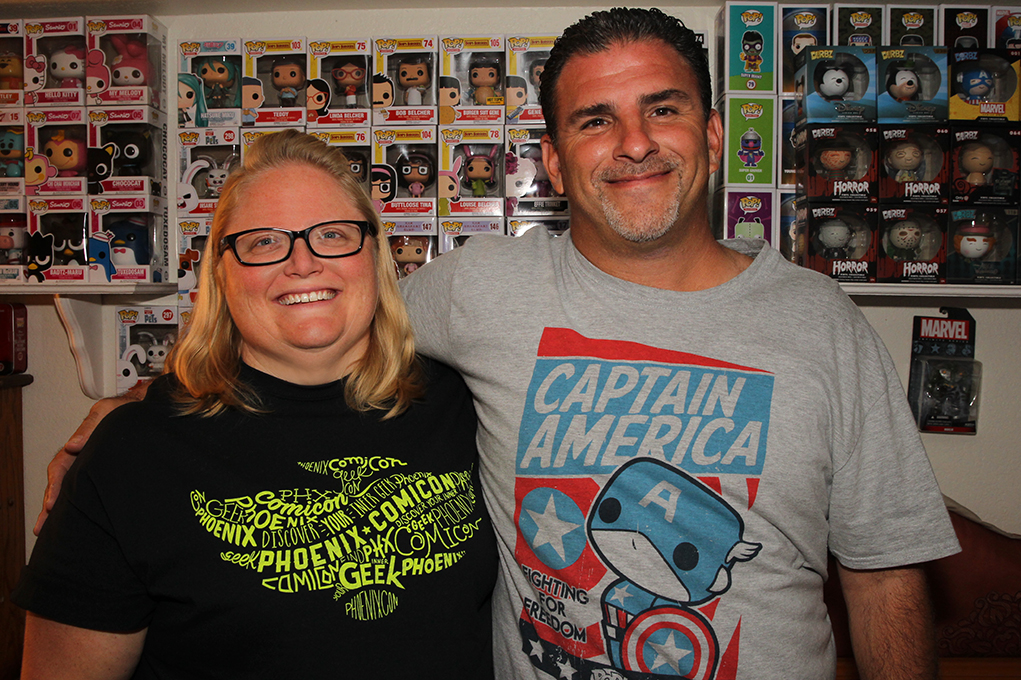 When you walk into the Levy home, you think you’re in a collectibles store. Cabinets, shelves and walls are filled with Funko, Disney, sunflower, birdhouses and other collectibles, the fruit of two lifetimes of searching for the objects of Angela and David Levy’s affection.

That’s what happens when two collectors meet, fall in love and marry. David began collecting pressed pennies when he was five years old, and later collected comic books and books in general. As an adult, he collected toys, especially Simpsons figures in the early 2000s. He had a huge Pez collection at one time, which he eventually sold. 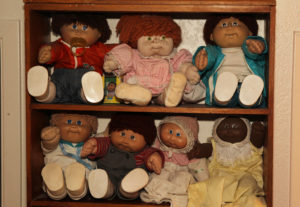 A collection of Angela’s Cabbage Patch Dolls is displayed on a shelf in her home. Jillian Danielson/RiverScene

Angela fell in love with Cabbage Patch dolls and penguins when she was 10. At one time, she had more than 100 Cabbage Patch dolls. Later she collected Strawberry Shortcake, Hello Kitty and Tuxedo Sam, some of which she still has.

“Funko Pops is coming out soon with a Strawberry Shortcake line,” Angela said excitedly. “I can’t wait to see them.”

One of Angela’s passions is sunflowers. A kitchen cupboard is filled with dishware with sunflower designs. She also has plaques, mosaic tiles, vases and a host of other items with sunflowers on them. 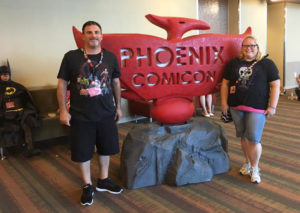 David and Angela pose for a photo at a Phoenix Comic Con. photo courtesy David Levy

“We’ve met some great people at conventions,” David noted. “We’ve also met a lot of people in town through our collections. It’s fun to meet people with the same interests.”

Angela and David have other avenues for finding more pieces to add to their collections.

“We go to thrift shops and yard sales a lot,” David said, “and often find collectibles to add to our collections.” 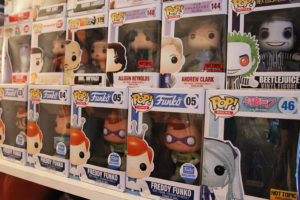 A collection of POPS are displayed on a shelf in the home of Angela and David. Jillian Danielson/RiverScene

David’s favorite collectibles are Captain America and Funko Pops; Angela’s are Funko Pops, Disney, and mini’s of any kind. One of her favorites is Mickey Mouse.

The popular Funko figures are presently the Levy’s main interest, and they have about 180 of them lining their walls.

Funko, based in Everett, Wash., is a company that manufactures licensed popculture toys. Funko is most known for producing over 1,000 different licensed vinyl figures. In addition, Funko produces licensed plush figures, bobble heads, action figures, and licensed electronic items such as USB drives, lamps, and headphones. Funko figures are featured in vinyl, pins, key chains, T-shirts, and other forms. They are licensed to use close to 100 film, TV and radio characters, among them Disney, “Game of Thrones,” NFL, DC, Marvel, Harry Potter, and Star Wars. The figures usually retail from $8.95 to $15.99. 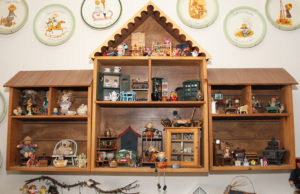 A wooden dollhouse hangs on a wall in the home of Angela and David. Jillian Danielson/RiverScene

“My grandfather was a carpenter, and I had asked him to build me a cabinet that looks like a doll house to hang on the wall,” Angela explained. “He used wood from his own home in the cabinet, and wood from my great-grandfather’s shed for the roof, so it has family history and means a lot to me.”

After years of collecting, David finally realized they needed to give away or sell off some of them to make room for new interests. Among the collectibles he sold were 100 Star Wars figures.

“Angela found it hard to part with any of her collectibles at first,’ David added, “but she finally came around and let me sell some of hers.”

“But I kept a few of my favorite Cabbage Patch and rag dolls,” Angela interjected. “I could never give up the very first Cabbage Patch that my father gave me.”

When David made the decision to sell off some of their collectibles, he started a Facebook page called “Havasu Toys & Collectibles For Sale.”

“About 10 minutes after I created the page, 13 people had signed up,” David said with amazement, “and the buying and selling just took off.”

The Levy’s two daughters, Megan, 16, and Madeline, 14, are not overly impressed with their parents’ collections that have taken over the house, although Megan has some elephants and Madeline has some Pops. It remains to be seen if they will eventually give in to the collectibles bug as their parents have. 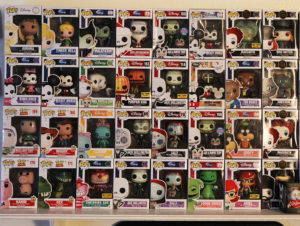 A collection of POPS is displayed on a shelf in the home of Angela and David. Jillian Danielson/RiverScene 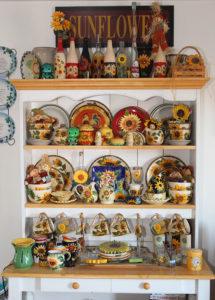 A sunflower collection sits on display at the home of Angela and David. Jillian Danielson/RiverScene

One Response to “SUPER FANS:  Angela and David Levy”