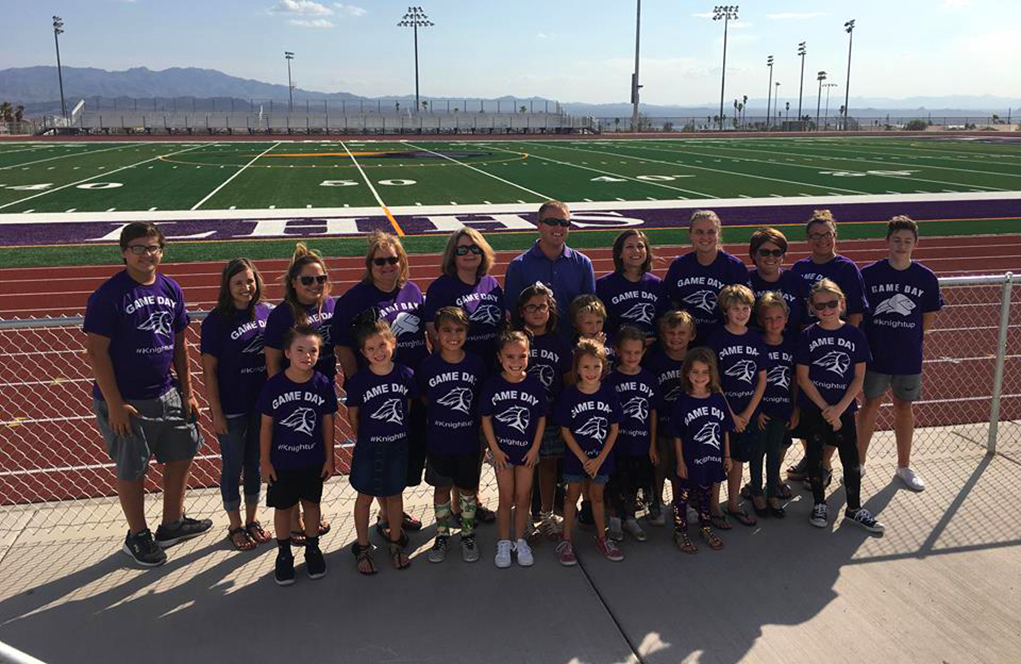 Traditions for local high school sports in Lake Havasu City have always been around, whether it’s the Golden Shovel, the Fight Song, or any other special way to support the Fighting Knights.

Adding to the list of traditions is none other than “Purple Shirt Friday” created by Havasu’s Brady Krueger. As head of athletics, Brady wanted to find a way to get the Knights motivated and how else by making sure those new bleachers are filled with purple.

Growing up in the small town of Hudson, Wis., Brady knows what it’s like to be from a community where almost everyone knows one another. Taking part in soccer, basketball and track, Krueger knew what it meant to show support for athletes which was all the more  reason to motivate him to create a new tradition.

It all began when Krueger had taken notice in the lack of attendance at the football games and wanted to make a drastic change. Krueger went to the district office asking if the kids at Lake Havasu High School’s preschool could start wearing purple on Fridays. Denise Miner soon followed in getting the word out, as she talked with each elementary school in town about getting in the traditional spirit.

After seeking out each school, only Jamaica, Nautilus and Smoketree had gotten on board with all students and faculty alike sporting purple.

To gain more support, Brady and the Booster Club had set to encourage more schools to join in on the tradition. Brady & Co. had been entirely successful as they gained the support from not only Oro Grande and Starline, but also Thunderbolt Middle School.

As time went on, Purple Shirt Fridays became more and more prevalent and even local businesses wanted in on the new tradition. Places like Anderson Auto Group and Walgreens decided to show their support. Even Dr. Buckman’s office and NFP Insurence have begun to support the tradition.

Luckily for the students wearing purple, admission to games will be decreased from $3 to only $1.

Special purple shirts to specifically support the Knights were created because of the increase of supporters. The Booster Club has gotten sponsors to fund raffles for the schools as well as a budget to bring things like donuts, juice and other snacks.

Krueger has striven for support not only to motivate the Knights, but to bring the community together. The tradition took off and Havasu Preparatory Academy has reached out to ask about being involved as well.

In order to show support for former Knights, Krueger is hosting an open house for alumni dating back to as far as the 1969 on August 31 from 5 to 6 p.m., and those same alumni will be honored at halftime during the Golden Shovel game.

Brady has a vision of getting the whole town to wear purple to support the Knights, and how the town has responded so far, that day could be achieved.

Shirts are $8 and are available. If you would like to purchase a purple shirt, contact Lake Havasu High School at lhhs.athleticboosterclub@gmail.com