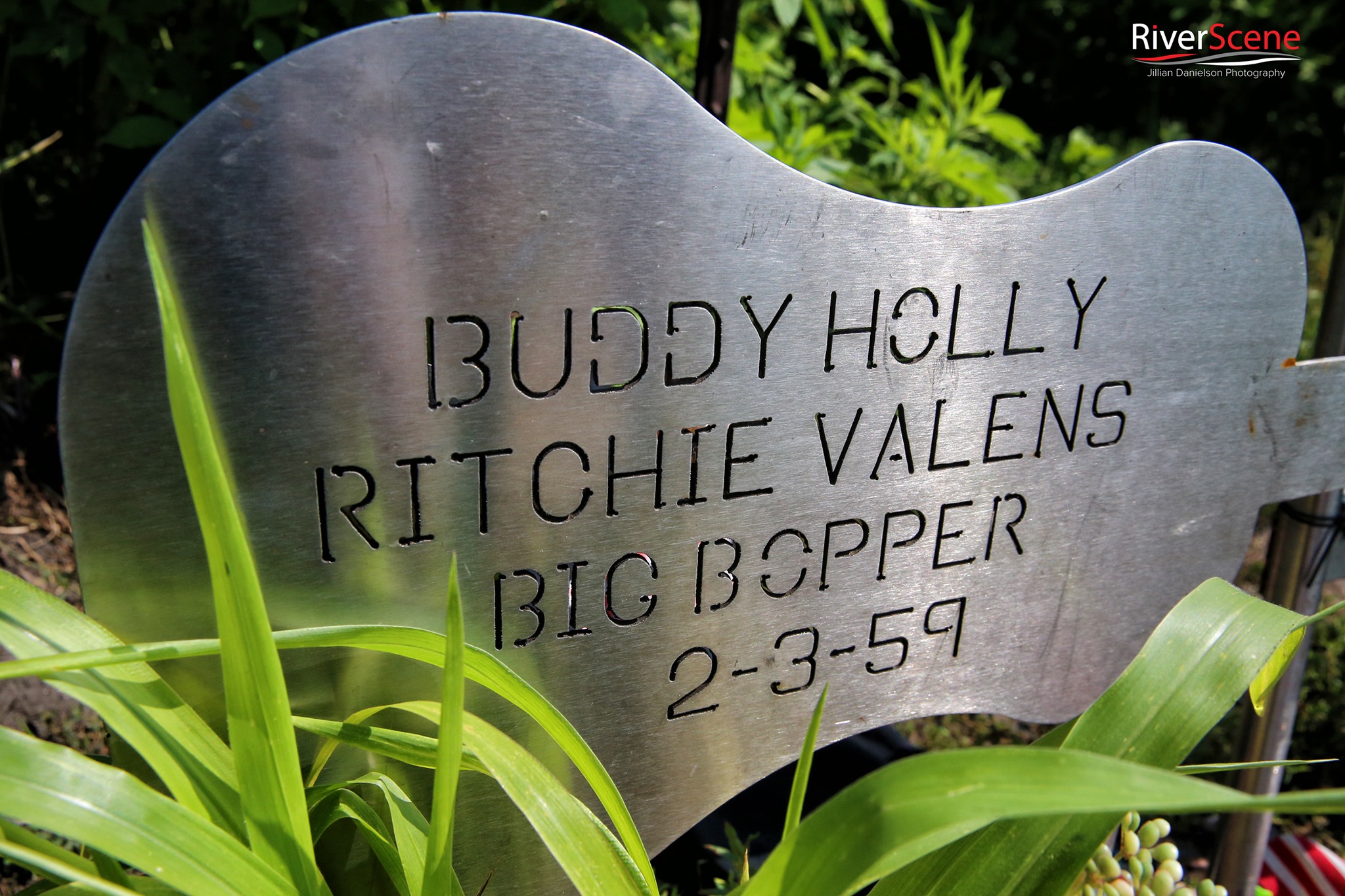 Often referred to as the “Day that music died,” today is the 62nd anniversary of the last performance of early rockers Richie Valens, Buddy Holly and The Big Bopper – J.P. Richardson.

After stopping at Clear Lake, Iowa, to perform at the Surf Ballroom, frustrated by terrible conditions, Holly chose to charter a plane to reach the tour’s next venue in Moorhead, Min. The plane carrying the three musicians and the pilot crashed into a cornfield outside Clear Lake, killing all four. 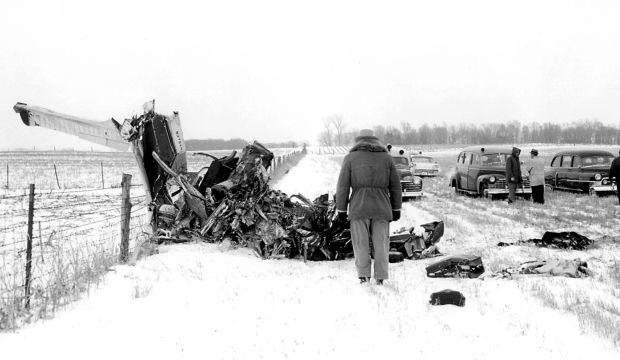 A newspaper photo from the Globe Gazette in 1959 after the plane crash.

The event has since been mentioned in several songs and featured in films. Various monuments have been erected at the crash site and in Clear Lake, an annual memorial concert is held at the Surf Ballroom, the venue that hosted the artists’ last performances.

Lake Havasu local, Lee Robinson, remembers that day well at the Surf Ballroom, he was there.

Robinson was a student at Waldorf College at the time in Clear Lake, Iowa in 1959.  “Back in those days, students of Waldorf weren’t allowed to go to dances. We were told we couldn’t go to the Winter Dance Party. Many students went anyway,” Robinson said.

“Half way through the show, an announcer came over the PA and said ‘faculty members were there to greet the students. They were actually there to see which students were there to take names.”

According to the Surf Ballroom website, 1,100 fans were in attendance that day. “When the Dean came in, exit doors all flew open and 200 kids went running out the doors so they wouldn’t get caught,” Robinson laughs. 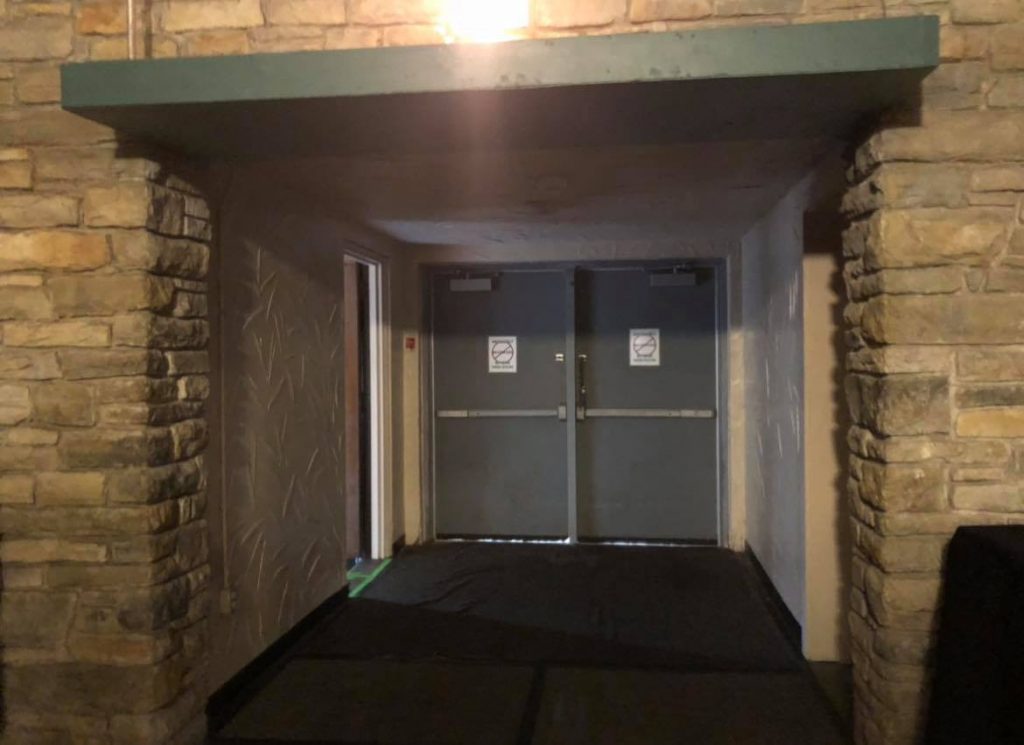 “My buddies and I ran out the back doors and waited outside till the faculty left. We then went back inside that back door and Ritchie Valens and Buddy Holly were walking out after the concert. We got to meet them all, tell them thanks for being there that night backstage. We were some of the last to see them alive. There were probably 20 of us back there.

“Later that night, we were going down Highway 18 back home to Forrest City when we heard on the radio KJLO that it (the plane) crashed about 45 minutes to an hour later.”

Years later in 2019, Robinson’s daughter, RiverScene Magazine publisher Jillian Danielson, took her husband and teenage daughters to discover her roots – where she grew up in Iowa until 1987,  when her family moved to Lake Havasu City.

Danielson and her family visited cousins that live near Clear Lake. The family went to the Surf Ballroom to retrace the steps where Robinson was that night.

“It was amazing getting to see where my dad got to witness Rock N’ Roll history. Some of my cousins still go to concerts at the Surf, so it was really cool for my kids to see where grandpa and cousins hung out.

“We got to see the back door  and stage area where my dad met the musicians. So that was pretty cool too,” Danielson said. 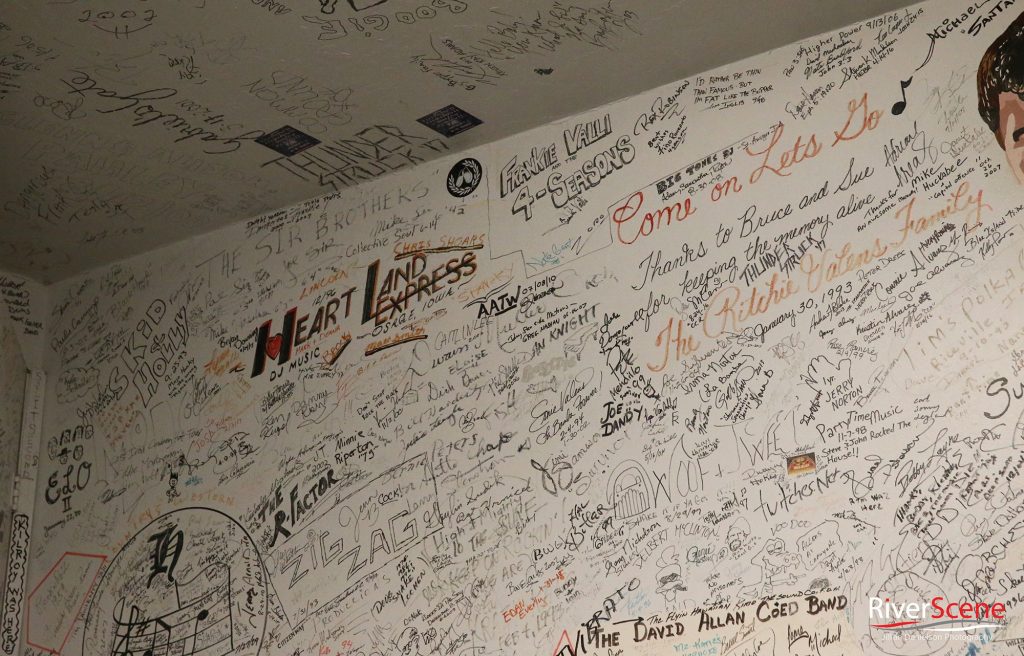 Band autographs cover the Surf Ballroom backstage green room that have played there over the years. Jillian Danielson/RiverScene

The back room is covered in autographs on the wall and ceiling by bands that have played their over the years.

“You can take tours of the Surf, stand on the same stage where Valens, The Big Bopper and Holly played and check out music memorabilia. After visiting the Surf, my family and I went to the cornfield where the plane crashed outside of Clear Lake, Iowa.

“The farmer who owns the field has kept a path clear for fans to make the half mile walk to pay their respects. There is a marker on the side of the road that resembles Buddy Holly’s glasses.” 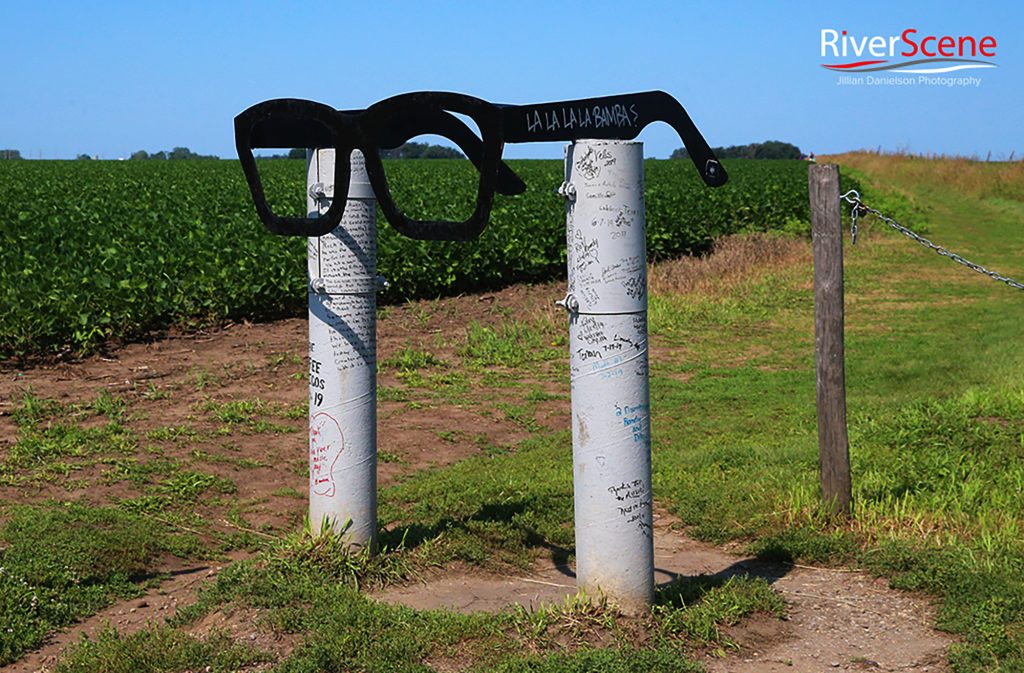 Replica glasses of Buddy Holly are on the side of the road to mark where the path starts through the field. Jillian Danielson/RiverScene

“When you get to a spot, there is a marker shaped like a guitar in the exact spot Buddy Holly’s body was recovered near the plane. Their is another marker of wings in memory of the pilot, and a tall pole in the exact spot where the plane wreckage was found. It’s very surreal. Some fans have left items of fake flowers and other mementos in memory.

A tall pole marks the spot where the plane was found that carried Buddy Holly, Ritchie Valens and The Big Bopper before it crashed in 1959. Jillian Danielson/RiverScene

“It was well worth the trip for us to see where my cousins and dad have been to pay respects to Rock N Roll icons of the time. Of course, none of my dad’s story is in the movie LaBamba, and a historian at the Surf told me that LaBamba didn’t even film there for the dance party scenes. But, at the Surf, the real telephone that Valens called his manager on in the movie, is still on the wall. It’s behind glass. ”

Annually in February, Surf Ballroom holds celebrations to honor the three musicians. Some members of Ritchie Valens’ family have visited the Surf Ballroom to honor him and their autographs can also be seen in the back room on the wall.

To learn more about the Surf Ballroom and its’ history on the “Day the Music Died,” visit their website Surf History – Surf Ballroom.

Rock n’ Roll memorabilia is displayed on the walls of the Surf Ballroom and Museum. Jillian Danielson/RiverScene 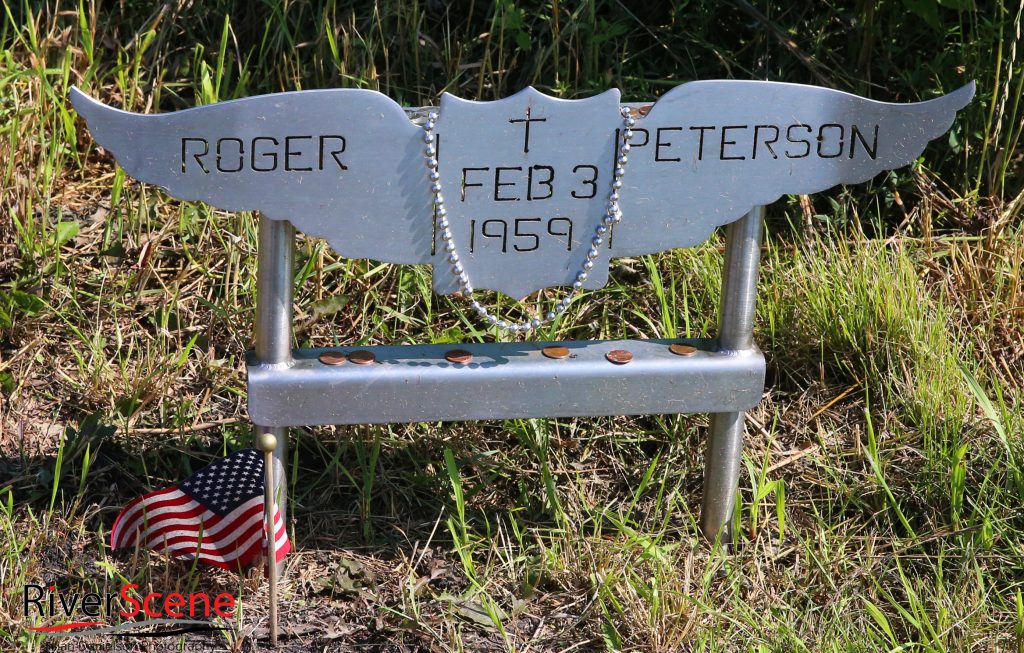 A plaque in memory of pilot Roger Peterson at the crash site. Jillian Danielson/RiverScene

A view from the stage where Ritchie Valens, Big Bopper, and Buddy Holly played their last concert in 1959. Jillian Danielson/RiverScene