Dean Baker, a local hot air balloon pilot who recently purchased the original hot air balloon that was commissioned by Robert McCulloch for the dedication of the London Bridge, has nurtured a dream for some time now. He and Jim Dolan, another balloon pilot in Havasu, have talked about creating a balloon especially for Lake Havasu City. They even have the design for the balloon: Blue sky, sunset over the lake, the London Bridge, and palm trees  — the quintessential image of Lake Havasu.

“But it’s a big project,” Baker said. “The initial cost for the envelope itself (the balloon) alone would be around $45,000.”

“We could use one of our own baskets for the balloon,” Dolan added, “but there’s also the cost of transporting the balloon to events.”

The pair envisions promoting Lake Havasu by taking the Havasu balloon to hot air balloon events in Phoenix, Albuquerque, Temecula, and many other places in the U.S. They hope to find corporate sponsorships to help fund the trips to events.

“We could even take it to London,” Dolan continued. “Imagine the stir it would create to show up at the Lord Mayor’s Appeal Balloon Regatta — a balloon representing the new home of the London Bridge.” 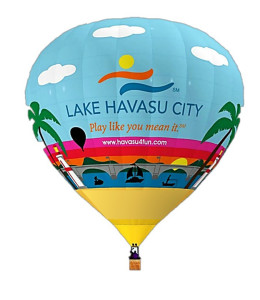 “But first, we want to know how much interest and commitment there is in the community as a whole for the balloon,” Baker said.

So Baker and Dolan have started a Facebook page to talk about the balloon project. They invite the residents of Havasu, as well as the general public, to give their thoughts on the page about Havasu having its own balloon, as well as any ideas they might have for marketing and fundraising.

To offer your opinion of Havasu having its very own hot air balloon, visit https://www.facebook.com/soarinoverhavasu.

While they’re waiting to see how much interest there is in Havasu for this project, interest is already generating outside of Lake Havasu. Baker was contacted today by a Phoenix tv news channel. They plan to come to Havasu to do a segment on the newly discovered London Bridge balloon.