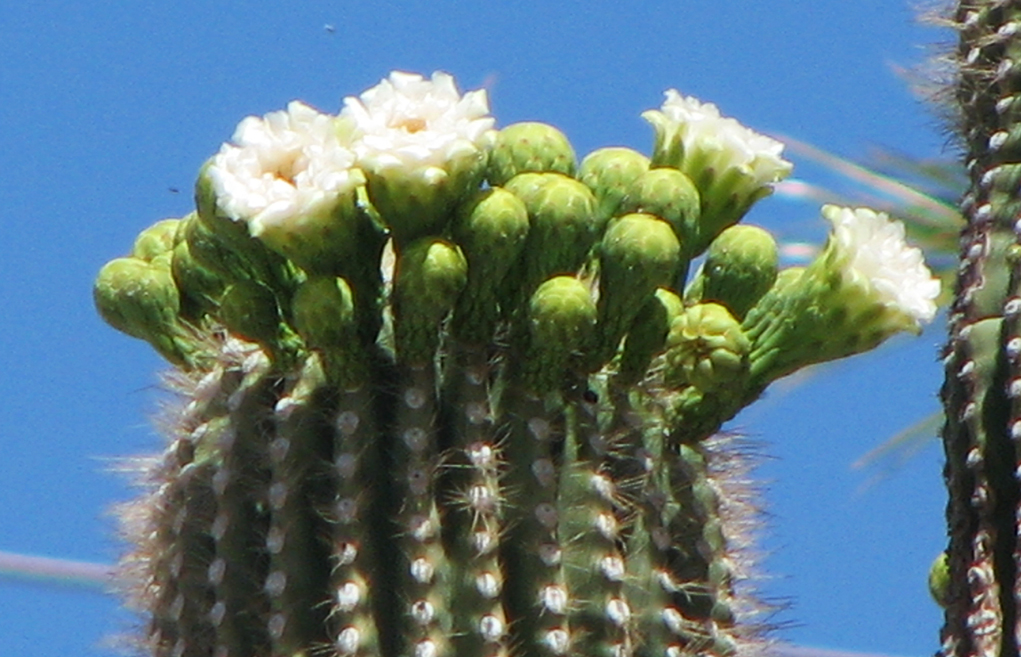 There is one living plant that invokes an iconic instant recognition of the Southwest.

It is the beautiful and impressive Saguaro cactus (Carnegiea gigantea) and the species can be seen all around Lake Havasu City.

One of the defining plants of the Sonoran Desert, the Saguaro (pronounced “Sa – WAH – ro”) is found in southern Arizona and western Sonora, Mexico. At the northern portion of their range, they are more plentiful on the warmer south-facing slopes. A few stray plants can also be found in southeast California.

The saguaro is the largest cactus in the United States. They are tree-like columnar cactuses that develop branches (or arms) as they age. These arms generally bend upward and can number more than 25. Saguaros are covered with protective spines, white flowers in the late spring, and red fruit in summer. Their water storage capacity enables them to survive drought conditions for a year or more.

Saguaros are a very slow-growing cactus. Studies show that a saguaro grows between 1 and 1.5 inches in the first eight years of its life. They can grow to be between 40-60 feet tall. When rain is plentiful and the saguaro is fully hydrated it can weigh between 3,200 and 4,800 pounds. They can live to be 150 to 200 years old.

The National Park Service states that by 95 or 100 years in age, a saguaro cactus can reach a height of 15-16 feet, and could start to produce its first arm. However, other sources say that a saguaro can begin growing arms between 40 and 75 years of age. By 200 years old, the saguaro cactus has reached its full height, reaching up to 45 feet tall. Some saguaros have been seen with dozens of arms, while other specimens never produce a single one.

Most saguaro roots are only 4 to 6 inches deep and radiate out as far from the plant as it is tall. There is one deep root, or tap root, that extends down into the ground more than 2 feet. After the saguaro dies, its woody ribs can be used to build roofs, fences, and parts of furniture. The holes in which birds nest, or “saguaro boots,” can be found among the dead saguaros. And Native Americans used these as water containers long before the canteen was available. 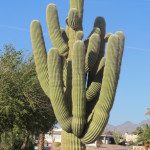 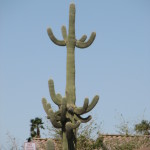 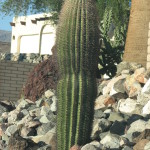 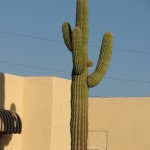 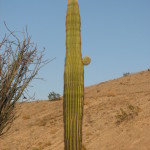 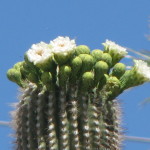 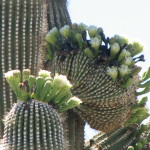 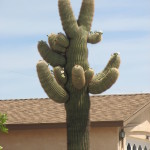 One Response to “The Fabulous Saguaro”