The Night Bikes Rule on McCulloch 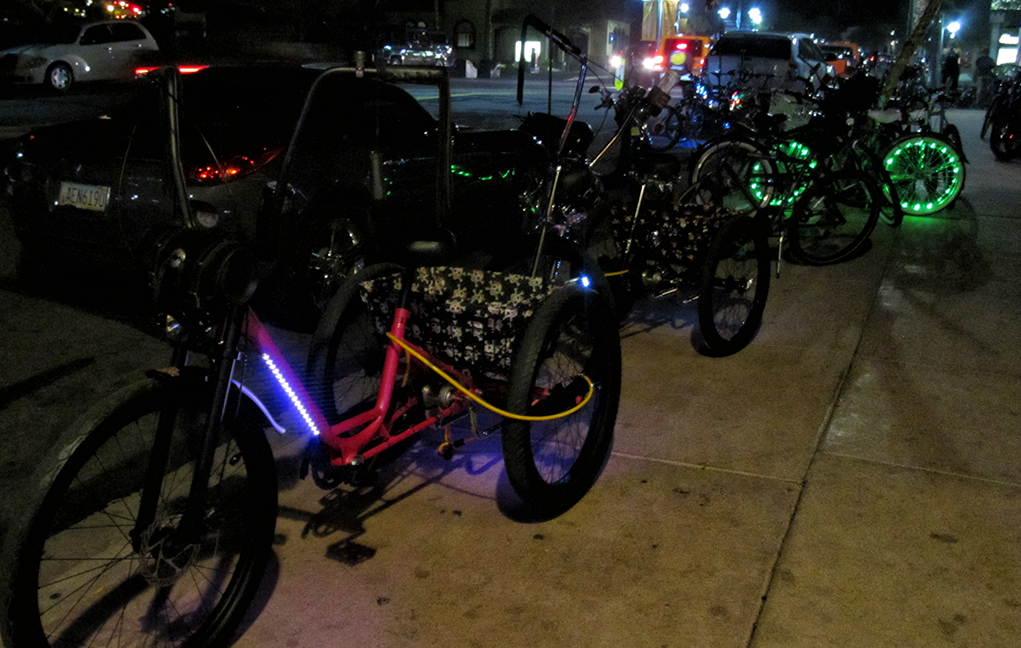 Friday night on McCulloch Boulevard was bustling with bicycles — hundreds of bicycles. It was the 22nd annual “Bikes to Bars” night.

Men and women converged on the uptown area in every type of bicycle in every color imaginable: Beach bikes, racing bikes, trikes, bikes with trailers. Many of the bikes were lit up like Christmas trees, with flashing lights and glow sticks on the spokes. There were trikes with baskets; one beach bike has a basket on front, filled with flowers. Laughter and bicycle horns and bells filled the air, with an occasional air horn that sounded like a locomotive horn, and a pink beach bike with bells that sounded like beautiful chimes. No one counts, but estimates of the number of bikes range from 300 to 400.

In front of BJ’s Tavern, Daryl Ross, of Lake Havasu City, was parking his bike. He said he came with about 10 friends.

“This is great!” Ross said. “I’ve been coming to this for five years. I love it because we get to meet so many people. Everyone gets along great, so there are no problems.”

Sitting on BJ’s wall, Ed and Colleen Connell,  from Manitoba, Canada, were watching the bikes come and go.

“We’ve never seen anything like this!” Ed Connell said. They have a vacation home in Havasu and visit three or four times a year, but they never happened to be here during Bikes to Bars.

“Look at them!” Ed Connell pointed to a side street where a group of 20 or more bikes crossed onto McCulloch. “This is really amazing.” 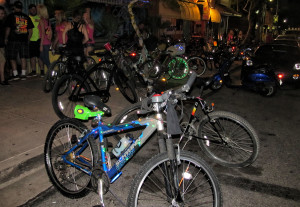 It was a big street party atmosphere, with friends hugging, laughing and calling to each other. The bikes come from all over Mohave County, and some from Southern California. Tonight may be the only time some of them see each other all year. These are people who appear to be enjoying the adventure, and enjoying their friendships.

Bikes to Bars was started in 1993 by Havasuvians Dave Stone and Kevin Williams. They were both personal watercraft racers and always attended the IJSBA World Finals in Havasu. But they were tired of fighting traffic to the Island, so that year they decided to ride their bikes to the races.

Stone and his wife Alex pulled up on their bikes. He was immediately surrounded by friends greeting him.

“In 1993, after the jet ski races that night,” Stone said, “Kevin and I stopped with about 10 friends, also on bikes, at El Rio, a long-gone restaurant/bar. The following year, we had about 100 bikes, and we decided to go from bar to bar, and it’s been growing since then. Friends tell friends who tell friends, so it’s bigger every year. In the beginning, we had this in April, then on the Fourth of July, then we settled on October during the Jet Ski races.”

The bicycle pub crawl stops at seven or eight bars up and down McCulloch.

“Now we have bars asking us to put them on our route,” Stone said.