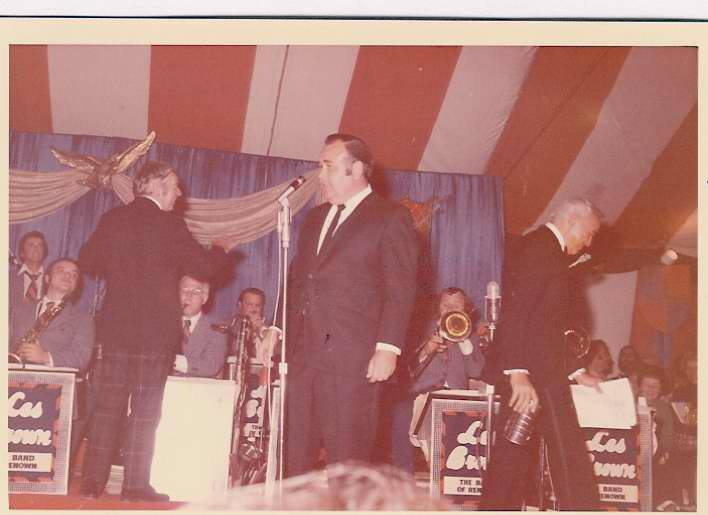 If time travel was possible, it might be interesting to return to the months leading up to the completion of the reconstruction of the London Bridge in Lake Havasu City.

It might be interesting to get inside the planning circles for the celebration to dedicate this wonder, this largest antique in the United States, this vision of Robert McCulloch’s.

It might be interesting to transport back to Oct. 10, 1971, to participate in the celebration. 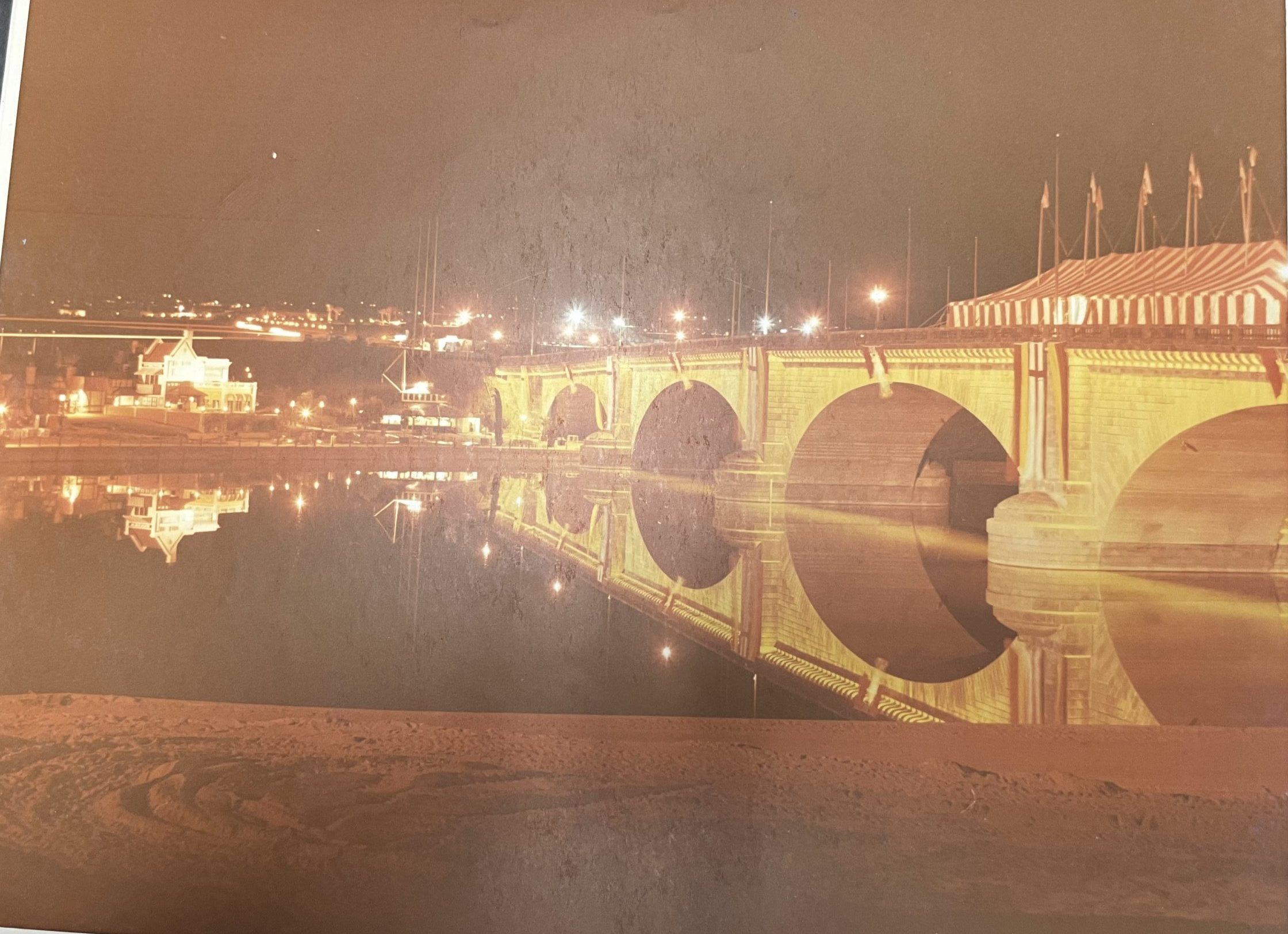 The Dedication Celebration included a parade, hot air balloons, skydivers, dignitaries from across the pond and from Hollywood, and all the trappings of something special and memorable. By some measures, it was estimated that as many as 100,000 people attended.

But the piéce de resistance was the grand banquet served in the beautiful, red-striped tent erected on the London Bridge. Dinner consisted of lobster and roast beef – the same meal served to King William IV when the bridge was first unveiled in 1831.

Les Brown and his Band of Renown entertained, along with comedian Jonathan Winters.

A British newsman was quoted by the New York Times as saying “It’s a super gimmick. It’s all quite mad – it could only happen in America. Only an American would think of investing that much in something as crazy as this.”

As it turns out, 50 years is a relatively short time in the overall scheme of things. There are those Pioneers here in Havasu who remember everything about that celebration and who were a part of it. 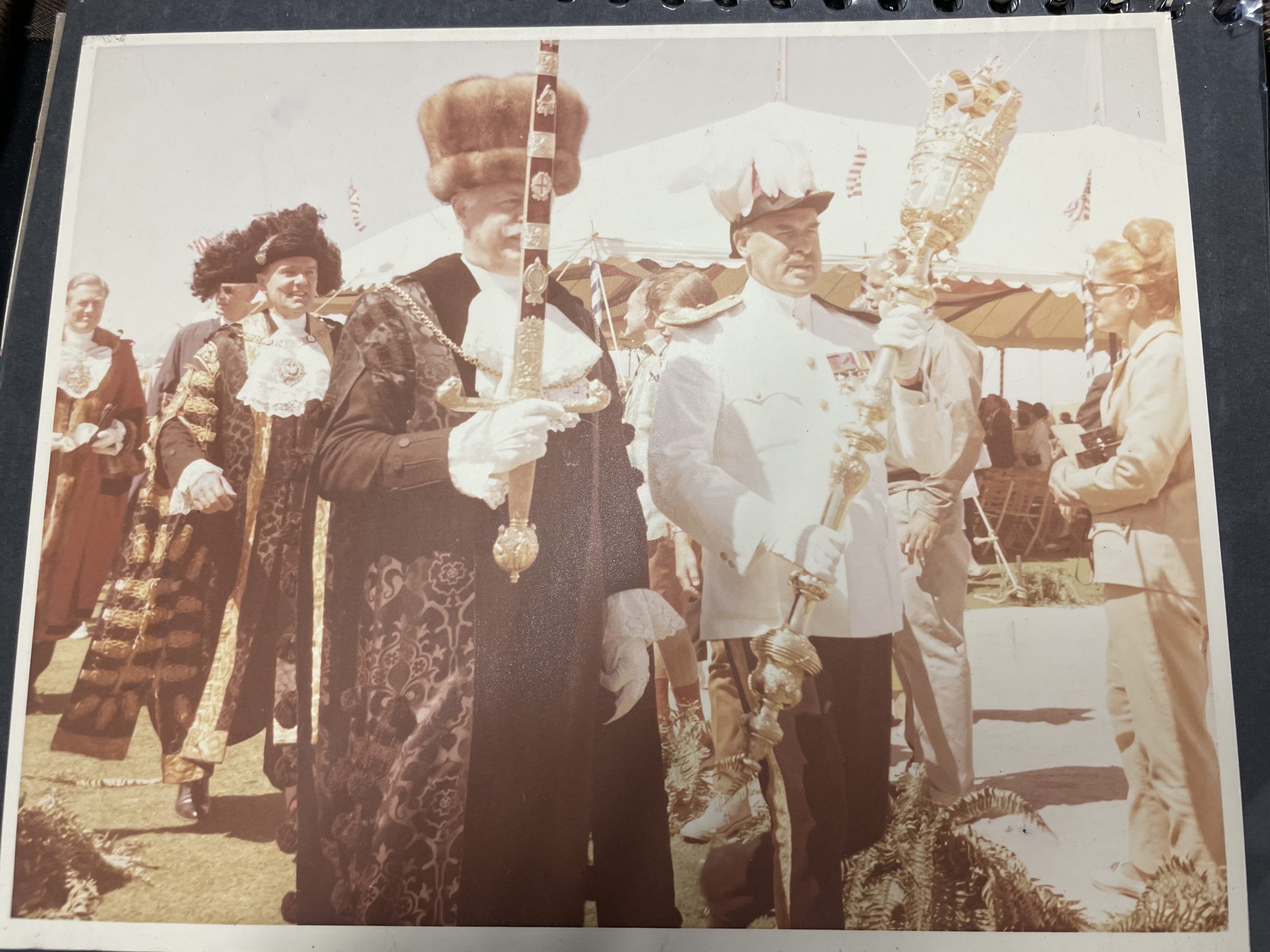 RiverScene Magazine recently caught up with a few longtime Havasuvians and asked for their memories of that evening.

Margie Sterling and her husband Jim relocated to Arizona from Missouri in 1964. They moved originally to Mesa. Jim, an electrician, found work in Lake Havasu City in 1964.

“Jim commuted from Mesa to Lake Havasu during the week and came home on weekends,” Margie said. She said the commuting lasted two or three months.

Jim was a pilot so a couple of weeks before the Sterlings were to move to Lake Havasu City, they flew over from Mesa.

“I didn’t know there were mountains,” Margie said. “I was actually kind of impressed,” she said.

As time passed, Jim began working on the bridge alongside C.V. Wood and Robert McCulloch.

“One day they said, ‘The granite is all here and set, so now Jim, you have to wire the bridge.’”

Jim had two years toward an engineering degree, Margie said, so he began to work it all out.

“He must have done a pretty good job, because the lights are still on.” 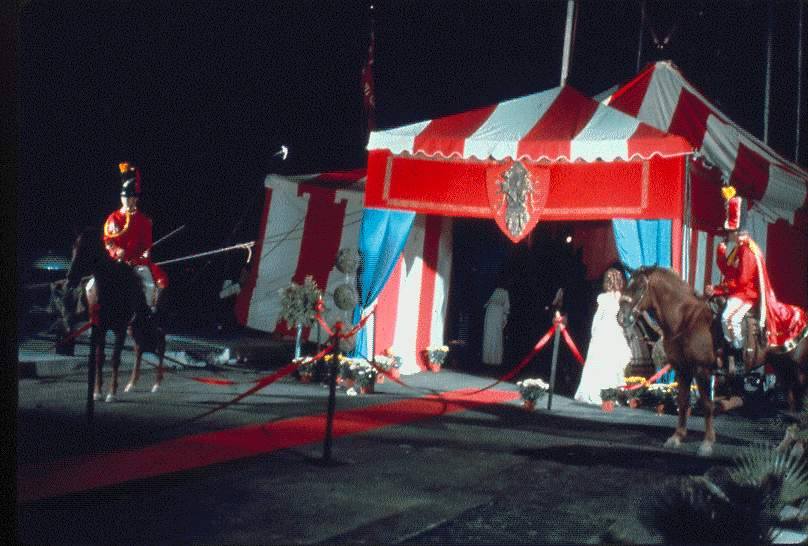 To say the evening gala of the Dedication Ceremony of the London Bridge in Lake Havasu City was anything but elegant would be an understatement. The entrance to the tent that was placed on the London Bridge brought guests into a fantastic environment fit for a queen or a king. Photo courtes of Lake Havasu Museum of History

Then came the celebration. Margie and Jim were there.

“It was really fabulous. It was very formal. I wore a long black dress,” she said.

Margie said the table settings were extravagant. “There was so much silverware, we had to figure out which ones to use when,” she said.

Margie said the tables were wall to wall in the big tent and there wasn’t enough room for dancing.

“It seems like it lasted until midnight or later. Everyone had a good time and drank a lot of champaign. It was so lavishly decorated with chandeliers hanging over the tables. Everything was fancy and just fabulous,” she said.

On the other side of the tent were those who provided the services to the attendees.

Lou Ann Striyle was part of that group.

The couple arrived in a 15-foot travel trailer with two children and a dog.

“And we didn’t have air conditioning,” she said.

The Striyle family took up residence at the Havasu Trailer Park located on what is now the Island.

Val had a job promise when they set out for Havasu, Lou Ann said. But when they arrived, the crew went on strike. Val worked in California for about three months before his job kicked in in Havasu.

The couple soon found a house in the area where Lake Havasu High School is now.

The London Bridge was alll dressed up and ready to party during the Dedication Celebration Oct. 10, 1971. Photo Courtesy Lake Havasu Museum of History

Lou Ann said Val was one of the last people on the bridge before the dedication.

When it came time for the banquet, Lou Ann said the price of tickets was not in their budget. “I think the tickets were $25 and $50. We just couldn’t afford it,” she said.

But then they heard the organizers were paying $25 for people to serve at the banquet and get dinner as well.

“I decided that was a way to be there, so I signed up. We got there at about 4 to set up.

“There wasn’t anything much here, so all the food was brought in by semi. I know the dinner was fancy, but we got beef stew. It was good, though,” Lou Ann said.

Lou Ann said her section was on the right and you could see the water over the edge of the bridge.

“Somebody, I won’t say who, was late to the banquet and had missed their hors d ’Oeuvres. We thought they weren’t coming, so we had put it out by the trash. We went to get it and served them,” she said.

She added that some of the volunteer law enforcement in the area couldn’t be there either, so they hung out outside the tent and peeked in to see what was going on.

At the end of the evening, Lou Ann said, there were red roses in beautiful containers near the stage area and all those who had worked the event were told they could take them home. “They were beautiful. I can’t remember how long they lasted, but that was nice,” she said.

Lou Ann went on to work for the Irrigation and Drainage District – the required department necessary to establish a city.

“I was thinking about it the other day and Jim Schulte and I are the only two still alive from the Drainage District,” Lou Ann said.

She is currently serving on the planning committee for the upcoming commemoration.

Sandy Breece – at true Pioneer – moved with her mother and father from Kansas City to Havasu in 1966.

“I was 20 or 21 – something like that. Lee Shoblom put out the word on KFWJ radio that they were looking for people to work in the tent for the dedication Oct. 10, 1971,” she said. 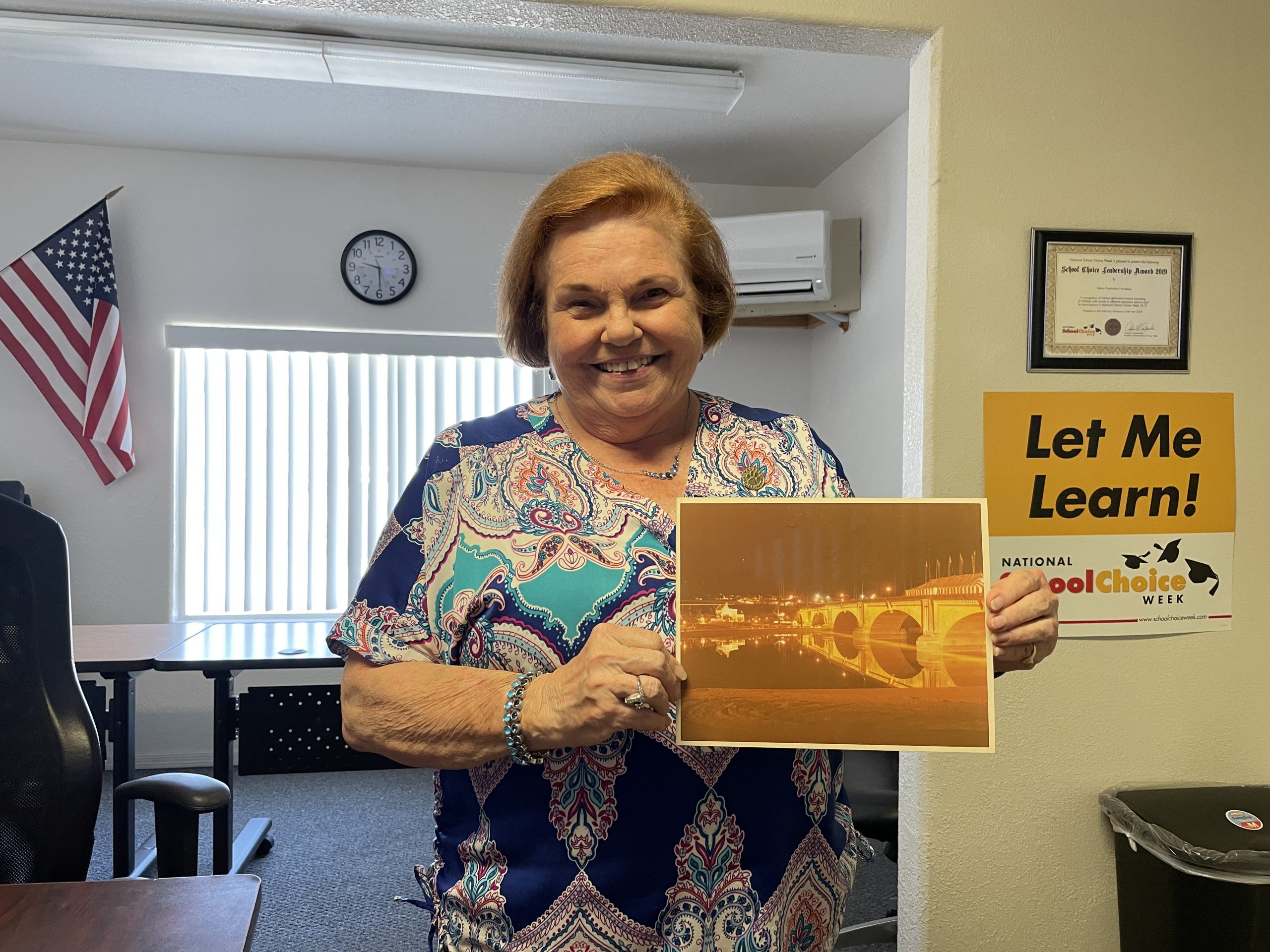 Sandy answered the call and was hired to work the big event.

“You had to go to several training sessions on Saturdays. It was training to be a Maitre D’ at a big time dinner. It was $100 per plate which was big money in those days. So, this was the only way people like me could see the dedication,” she said.

Sandy said those working the event wore uniforms that were “very English.” The women were outfitted in black skirts with white aprons, or white skirts with black aprons and little white hats. The men wore very “butlerish” outfits with dark pants and white shirts complete with the white towel over the arm.

She worked first in the cocktail tent. “In this tent, the centerpiece went all the way to the top of the tent and was almost as wide. It was filled with hors d’oeuvres. It was my job to keep the dips filled and cleaned off.”

Sandy said then it was time to move all the attendees to the dinner tent. “It went really slowly as many were already about three drinks down,” she said.

But after everyone was in the dinner tent, Breece was given the task of carrying large trays with the plated meal. “I will never know why the chose me to do that,” she said. She practiced and worried about it leading up to the event, she added.

Among the celebrities she remembers were comedian/actor Jonathan Winters, Dan Blocker and Lorne Greene, stars of “Bonanza”.

“It was all very well-orchestrated. Very well done. The only problem was the fireworks went off late. They were supposed to go off at about 9, but they ended up going off at around midnight,” she said. 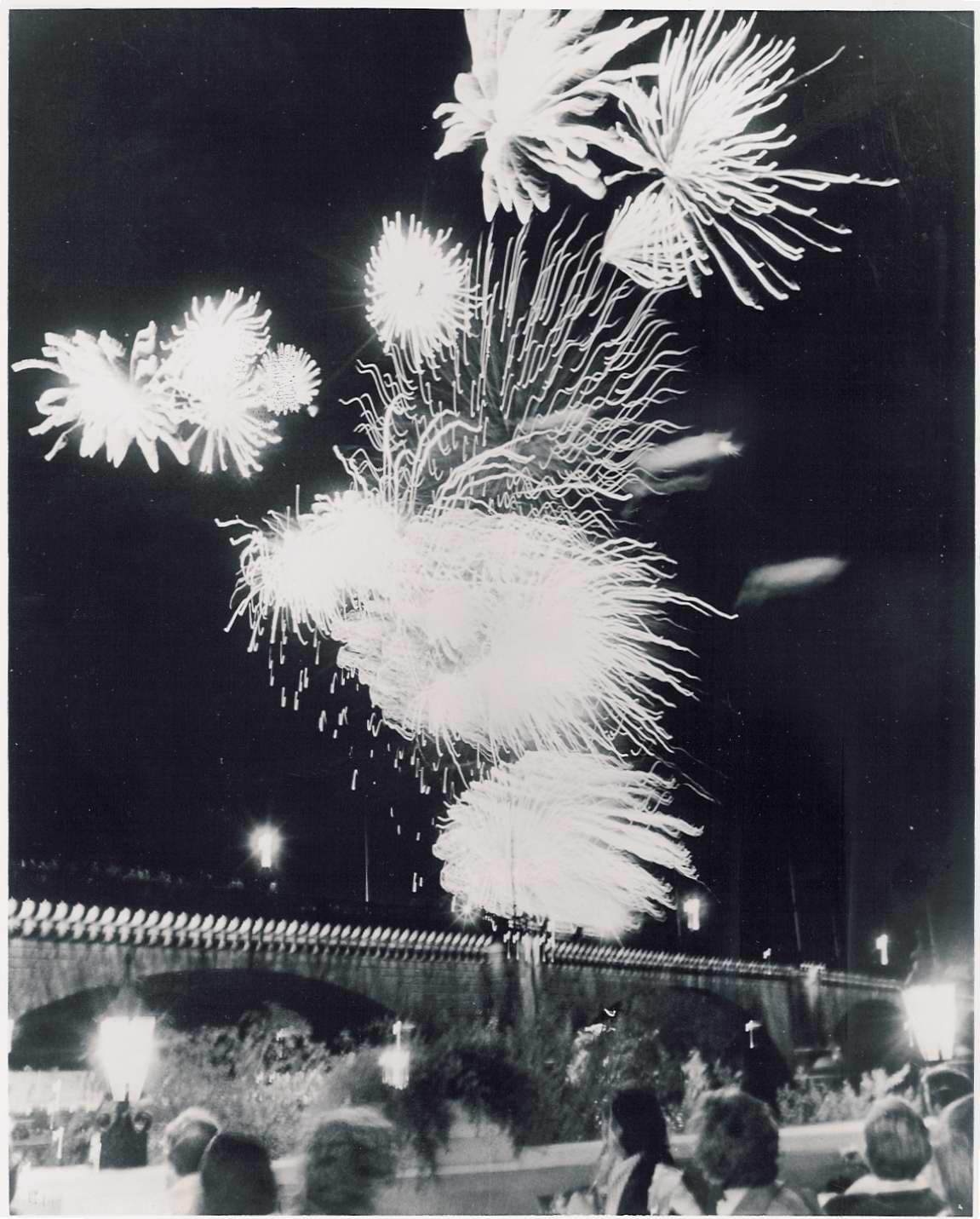 “It was one of the best things that ever happened in my life. It was a wonderful experience, and I actually got a check – they paid us,” she said.

Another iconic couple – Butch and Missy Wood – didn’t attend the banquet, but Missy recently told an interesting story that took place around that time.

Missy worked at Valley Bank in Lake Havasu City. She was in charge of taking in all the checks.

“One day I opened a bag of checks and there was a really large check – nearly 12-inches wide. It was the check Robert McCulloch wrote to purchase the London Bridge,” she said.

Valley Bank retained the actual check framed over their door for years and later donated it to the Lake Havasu Museum of History.

So, a time machine would come in handy right about now. Or to be a fly on the wall of the red-striped tent would have been a rare treat.

Please check the RiverScene London Bridge Days calendar for everything happening in October. 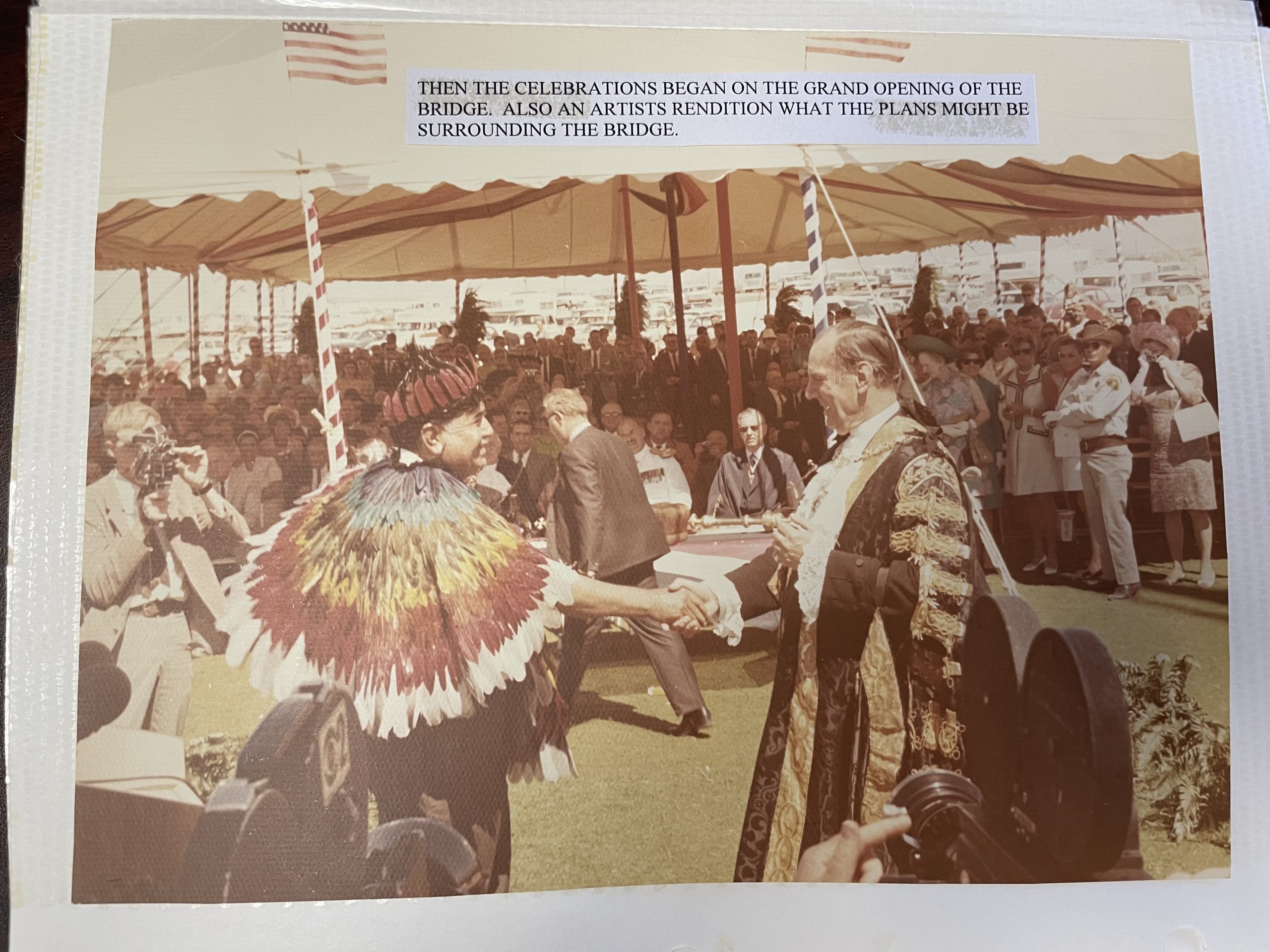 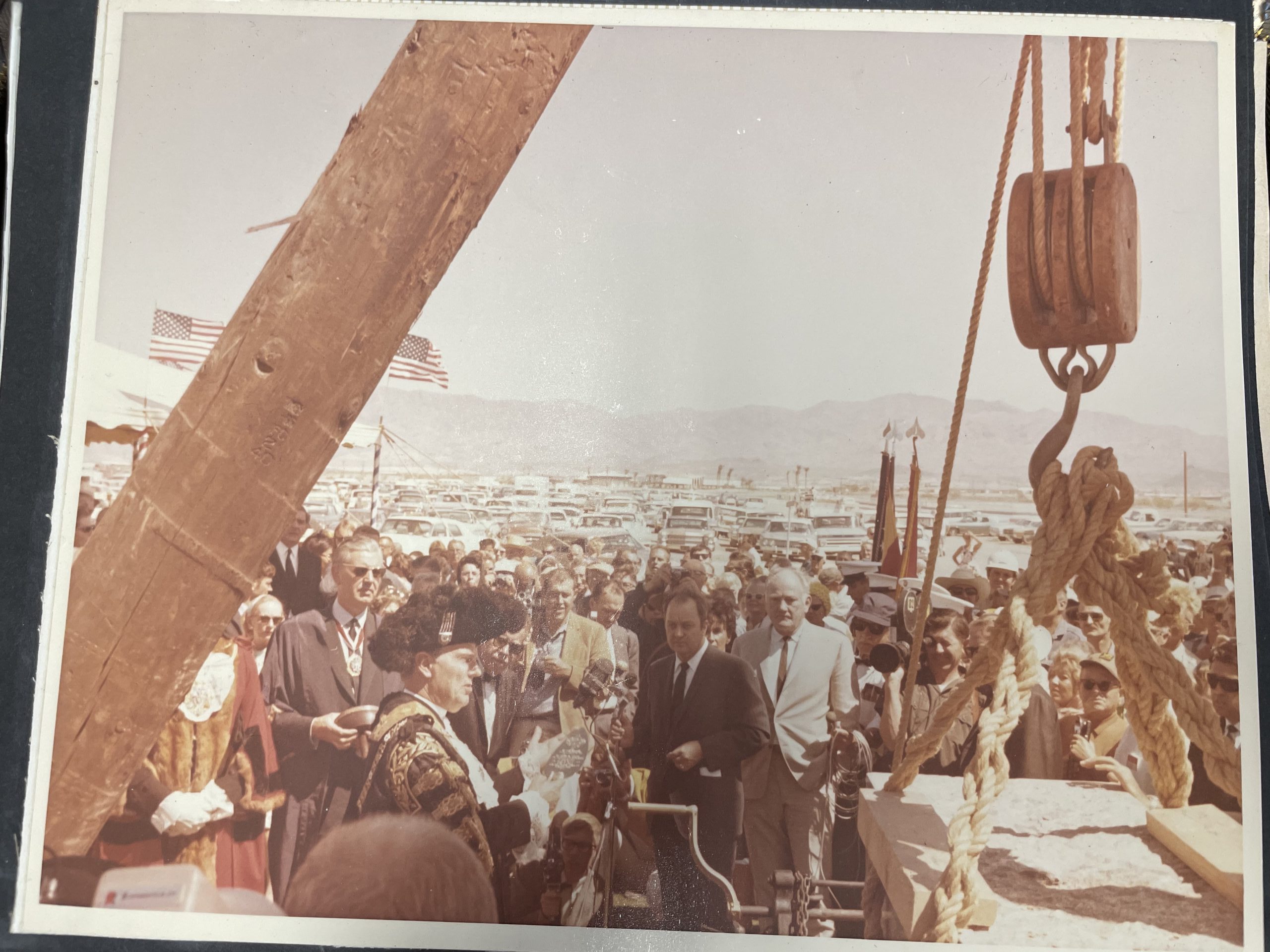 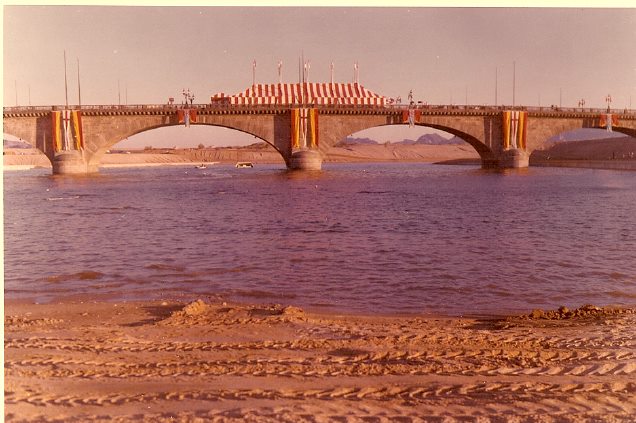 The elegant tent sereved as the site of the elegant banquet that highlighted the Dedication Ceremony of the London Bridge in Lake Havasu City Oct. 10, 1971. Photo Courtesy Lake Havasu Museum of History 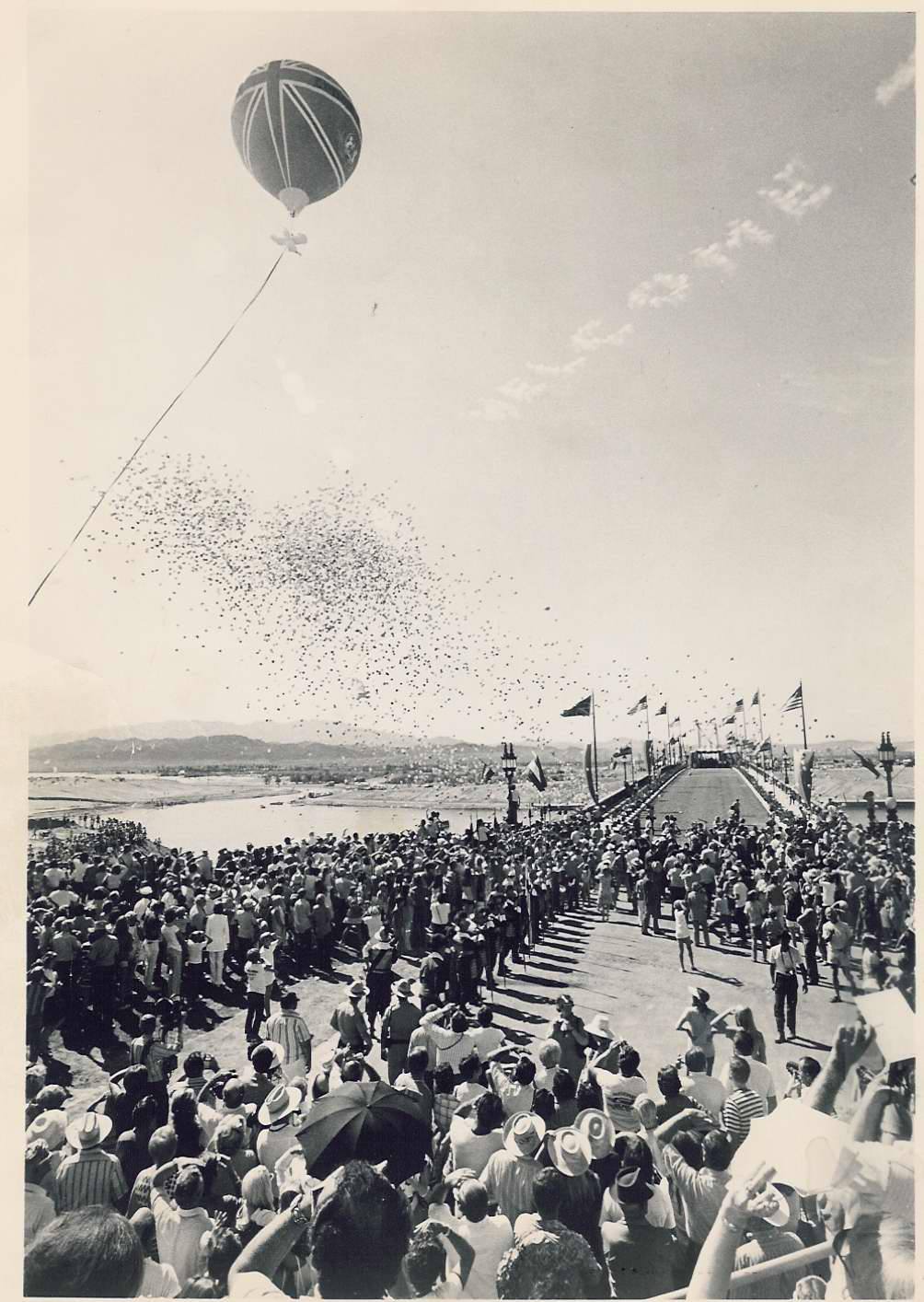 The Dedication Ceremony fo the London Bridge in Lake Havasu City Oct. 10, 1961, was attended by many area residents as well as a London contingency and the founding fathers of the city. Photo Courtes Lake Havasu Museum of History 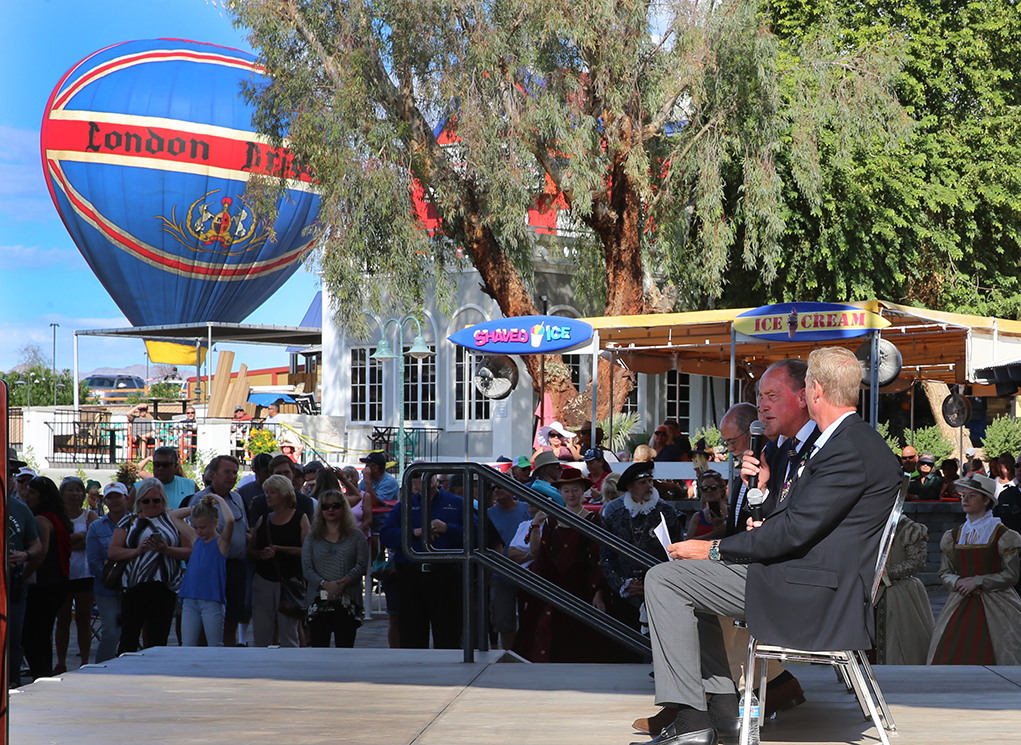 The original hot air balloon that was on hand for the London Bridge Days ceremony in the 70s is now owned by local pilot Dean Baker.  Jillian Danielson/RiverScene