The Storm That Left Lake Havasu In Shambles 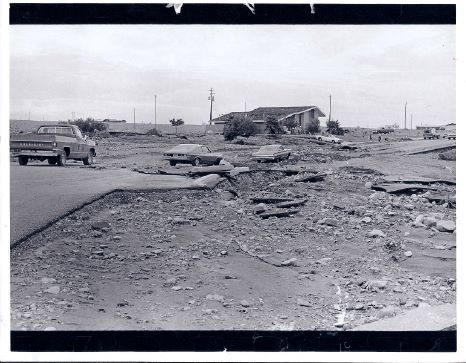 June 15 marks the first day of the yearly monsoon weather pattern. The rains of the monsoon don’t usually being until mid-July, but the weather conditions generally run from June to September.

The word monsoon comes from the arabic words, wasama (to mark) and mawsim (season). The term was coined from the Indian Sea when extreme wind and rainfall brought extensive damage to the surrounding areas. 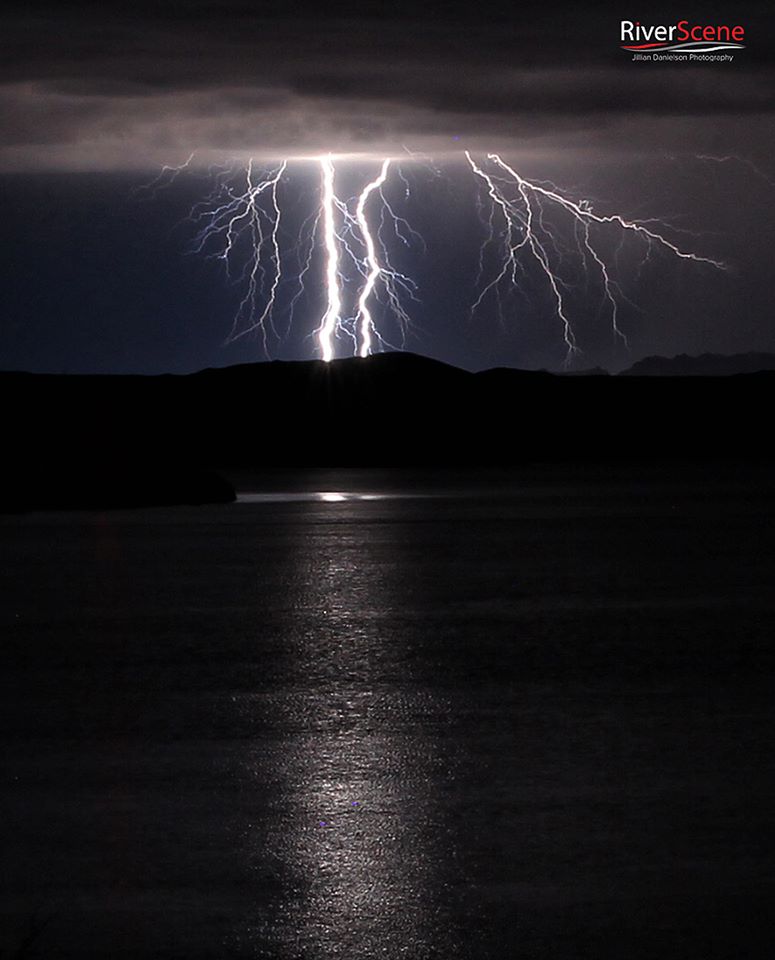 A CG lightning bolt hits the California side of the Colorado River reflecting on the water in 2016. Jillian Danielson/RiverScene

The cause of an Arizonan monsoon is the shifting in wind patterns creating tension between cold and warm winds. These winds clash with the shift and bring heavier atmospheric effects including extreme winds and increased precipitation levels.

July 14, 1974, marked the worst monsoon storm to hit Lake Havasu, with an estimated damage of $1.5 million (without inflation). The three-day storm started with intense winds that peaked at 80 m.p.h. The winds caused major damage to trees, power lines and small items including patio furniture and miscellaneous outdoor items.

According to the Las Vegas National Weather Service, the rains of the storm totaled in 2 inches within two days. The average yearly rainfall for Havasu is roughly 4 inches.

A utility worker at the time, Dave Ade, recalled his experience that June weekend.

As his crew went home for the day, they were immediately called back for damage repair as the storm hit. Power for nearly half the town was out within hours of the storm’s start.

He went to his first assigned repair area, Rainbow Wash where Acoma and Rainbow meet. Here, his team was greeted with no roadway whatsoever but, rather, a 10-foot drop into rushing waters.

“I remember seeing a house with a swimming pool but the dirt was washed away from it. There was just a concrete bulge hanging into the wash. It was all cracked.[It was hanging] six to eight feet. It was just a shell.”

The utility company worked relentlessly through Friday night, all day Saturday and Sunday night. They had to repair power lines and resecure displaced power poles. Some parts of Lake Havasu had no power for nearly a week.

Because of extreme winds, high precipitation over a three-day period, the storm was categorized as a microburst by the National Weather Service.

Overall, there were six buildings with damage with all reported damage totaling more than $1 million.

There were 14 injuries and three fatalities. The fatalities were the result of a family station wagon that became caught in the rushing waters. The vehicle traveled nearly 3,000 feet. Of the four family members in the vehicle, there were three deaths and one critical condition.

The storm of July 1974 was the most damaging in Lake Havasu City’s history.

To ensure safety, residents are advised to stay indoors during major storms. If out in public, remain inside stores, restaurants or other buildings until major rains have subsided.

Drivers caught in storms are strongly advised to drive at a slow pace with windshield wipers and headlights on. Avoid all washes and do not attempt to cross any running waterways. The depth may be elusive to drivers and debris caught in the waterways. 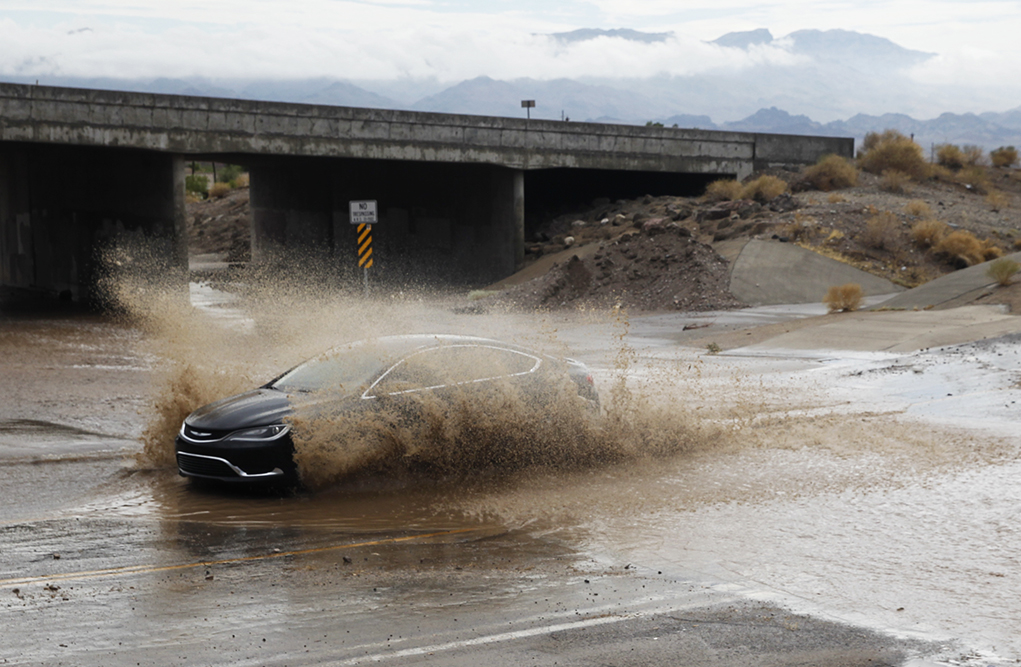 A car goes through water on Maricopa Blvd. after a monsoon storm. Jillian Danielson/RiverScene 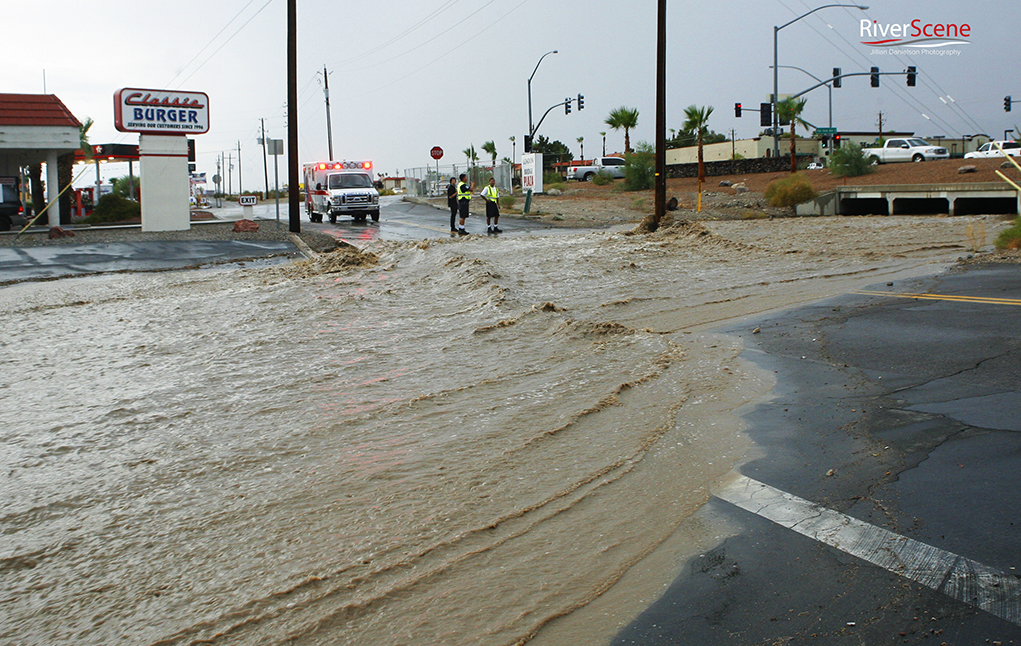 8 Responses to “The Storm That Left Lake Havasu In Shambles”