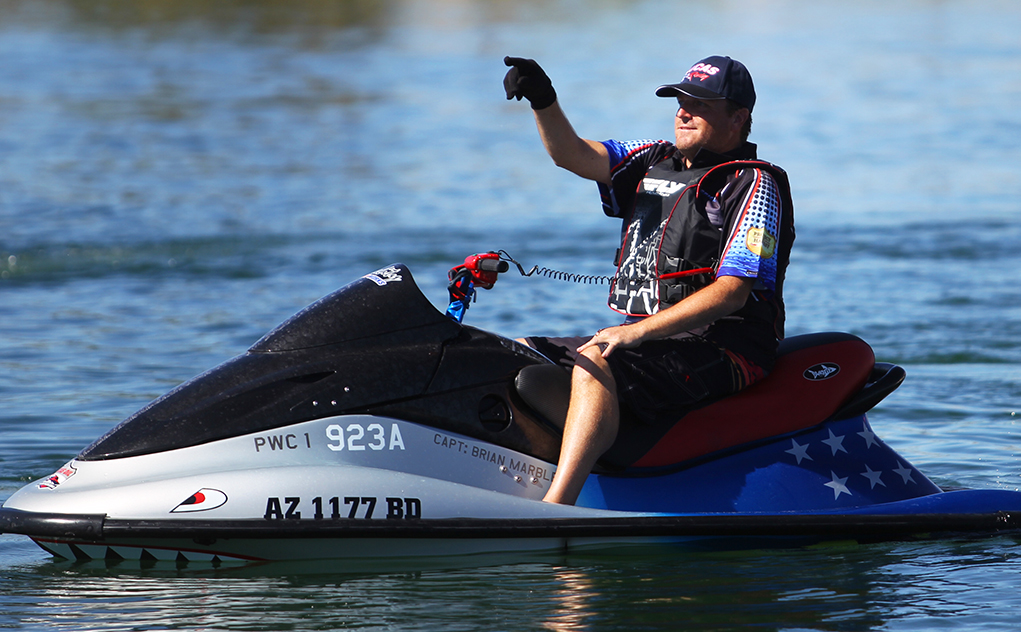 A racing personal watercraft is drawing attention not only for winning the Lucas Oil 2015 PWC1 World Championship, but also for its distinctive paint job.

“My uncle used to race quads also,” Marble said. “There’s a racing gene in my family, and I got it.”

Marble is employed by Lucas Oil on their tow team. Last year he had two PWCs at the races. He worked the tow team with his Yamaha XL 700, then switched to his Kawasaki Ultra 150 1200cc “War Machine” when his races came up. 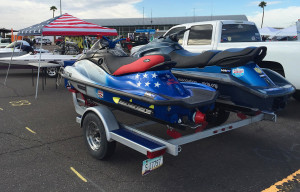 Although Marble has had the Kawasaki since 2003, he repainted it for the 2015 races, in patriotic red, white and blue. Then he renamed it “The War Machine,” after the Marvel Comics figure in the movie of the same name. Marble has always been a fan of military aircraft and decided to combine that interest with his interest in watercraft to create a PWC design that would inspire patriotism. He incorporated 13 stars on the “War Machine,” in honor of our 13 original colonies. He added a stenciled “No Step” to the craft, as used on military aircraft. His son recently enlisted in the U.S. Navy, and he will add a Navy sticker to the PWC. Brian is grateful to Quality Body Works in Bullhead City for supplying the paint and location in which to paint it. He also thanks his sponsors for supporting him: River Action Landscaping, Ace Pest Control, and Blind Alley Window Coverings, all in Lake Havasu.

As Marble readies himself and “War Machine” for the upcoming Lucas Oil race in Wild Pass March 24-26, he recalls the thrill of winning last year’s championship. But that thrill only came after he experienced one mechanical problem after the other with his PWC. After replacing multiple parts, he finally had it ready to race only days before the qualifications. But at the last minute, it failed again, and he had to race his Yamaha XL 700, “The Blue Bomber,” which he calls “War Machine II,” and which won the Division 1 Personal Watercraft World Finals. 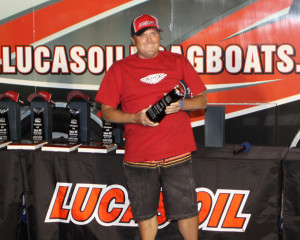 But more than simply winning the trophy, Marble treasures what the second place winner said in his acceptance speech: that he admired Marble for overcoming multiple setbacks, and that he couldn’t think of anyone he would rather lose to.

You see, Marble’s feat of winning the 2015 Championship is so much more than that — because he has muscular dystrophy, a disease that causes progressive weakness and loss of muscle mass. Some people who have muscular dystrophy will eventually lose the ability to walk. Some may have trouble breathing or swallowing.

Marble and his brother both have had Muscular Dystrophy since childhood; his brother has been confined to a wheel chair for years. Marble, 45, has remained determined throughout his life to being active and not living his life in a wheel chair. Racing personal watercraft is his road to combatting the disease. He doesn’t know if his way is the right way, but he does know that he is still able to live a better life than if he were in a wheel chair.

In addition to the toll on his body the sport takes, in the 2015 Lucas Oil racing series Marble had one problem after another with the “War Machine”. That he would not give up was why the second-place winner had such admiration for him.

Marble has another, and more important goal in mind for his racing. He wants to do something for kids with Muscular Dystrophy and other disabilities. He knows how important it is to keep disabled children from giving in to a disease, and he believes the way to do it is to keep them physically active and engaged in something that interests them. He envisions an organization that will bring disabled children to races so they might be encouraged to actively participate in physical pursuits. Last year, Lucas Oil supported his plan to bring a few disabled kids to the World Finals, where they were able to experience the thrill of sitting in racing boats, and Lucas Oil presented each child with ear muffs.

Marble started a Facebook page, “Reaching Kids Through Racing,” to advocate for getting disabled children involved in racing sports.

“Sometimes people neglect the emotional part of the physical challenges,” Marble said. “I want people to see beyond the wheelchair and their limitations. Keeping kids with disabilities active and engaged is important to their overall well-being. The racing event I can bring a child to might be the one highlight of their life, and that’s what it’s all about.”

Marble plans to race as long as he can, and to continue advocating for children with disabilities.