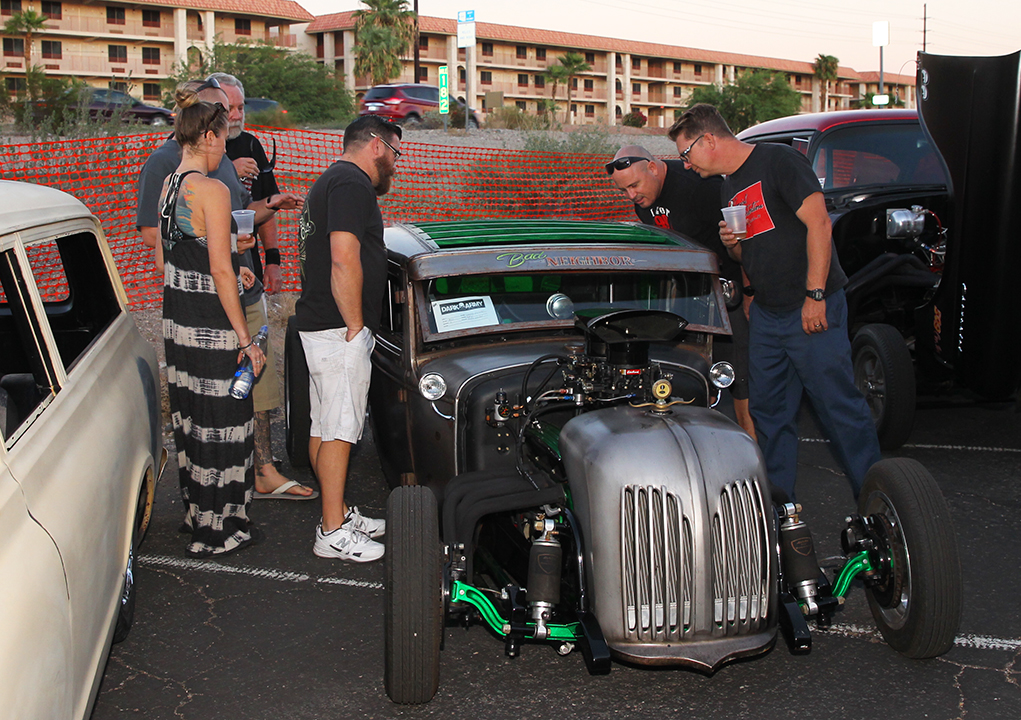 The Dark Army Crew in Lake Havasu City is set to host its 3rd annual Walk to the Moon car show from noon to 10 p.m. Friday.

The crew has been active in Havasu for about four years and consists of seven guys with a shared passion for cars. The group includes Mike Kemp, Richie Rich Mitten, Scott Jump, Louise “Luda” Quiles, Jeff and Joey Spencer and Scotty Taylor. 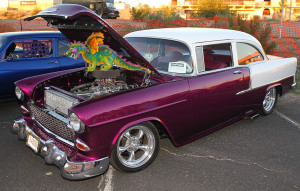 “We do a lot with cars,” said Mike Kemp, event organizer. “We wanted to take our interest in cars and do something good with it, and then we created Walk to the Moon.”

The smaller-scale car show purposefully coincides with Relics and Rods Run to the Sun car show.

“They’re the best in the West,” Kemp said of Relics and Rods Run to the Sun car show. “I’ve been watching them since I was a kid. They really put car fever into this town. What we’re doing is we’re appealing to the local guys who work two or three jobs, who build cars out of their garages, all while raising kids. The ones who maybe can’t do a weeklong car show.”

With Friday being identified as the least obtrusive when it comes to Run to Sun’s scheduled activities, Walk to the Moon – a play off the big show’s namesake – even schedules its main attractions to coincide with the working man’s week.

Last year, 56 cars registered for the event. Organizers are expecting as many as 100 this year. Participants are traveling from Bullhead City, Mohave Valley, Phoenix and Las Vegas, Nev.

Registration is the day of the event and the cost is $10 per car to show. The price includes a dash plaque and one drink ticket for a Mudshark microbrew. The valve cover races are $5 to enter.

“Another big draw is we do valve cover races,” Kemp said.

The valve covers are affixed with any type of wheels other than steel, and outfitted to the rules. The rules include criteria such as the contraption can’t weigh over 10 pounds, can’t be wider than 10 inches, it can’t be longer than 30 inches and it can’t have moving weight.

They’re raced the length of a 25-foot track. 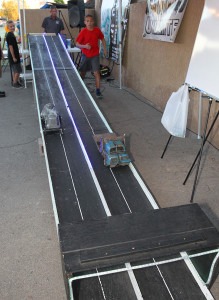 “You don’t have to have a car to participate in our event,” Kemp said. “ It’s $5 to enter the valve cover races. They’ll be on display. There’s a people’s choice award for the best-looking valve. It’s $1 to vote, the money is for the charity … We didn’t realize how much this would grow. It’s fun to just watch the kids get into it.”

Last year, 24 valve covers competed for the win. This year as many as 30 are expected.

Awards will be presented for Best of Show, People’s Choice, Under Construction, and Sinister 7 for the event’s car show component. The Sinister 7 award, another car show award, is made up of seven individual awards. The seven Dark Army members together walk the show and each chooses their favorite registered auto to receive the award.

When it comes to the Valve Cover races, Valve Cover Winner is the fastest participant and Best Valve Cover is the votes tallied from people’s choice.

All proceeds benefit The Norona Effect for their efforts to change how childhood cancers are treated.

“We understand the void they’re trying to fill,” Kemp said.

Local families facing a childhood cancer scenario must travel as far as Las Vegas for treatments. It takes its toll financially and emotionally, he said.

“This year, we’re hoping to beat that,” Kemp said.

Admission to the event is free to the public. The event’s agenda includes valve cover test-and-tune from noon to 6:30p.m., a bicycle slow drag race at 3p.m., and the valve cover races begin at 7p.m.

The family event also features live entertainment from local talent The Barrowers, which is a cover band who plays their own stuff, too. The event’s venue is the alleyway behind Mudshark Brewery, at 210 Swanson Ave., in Havasu.