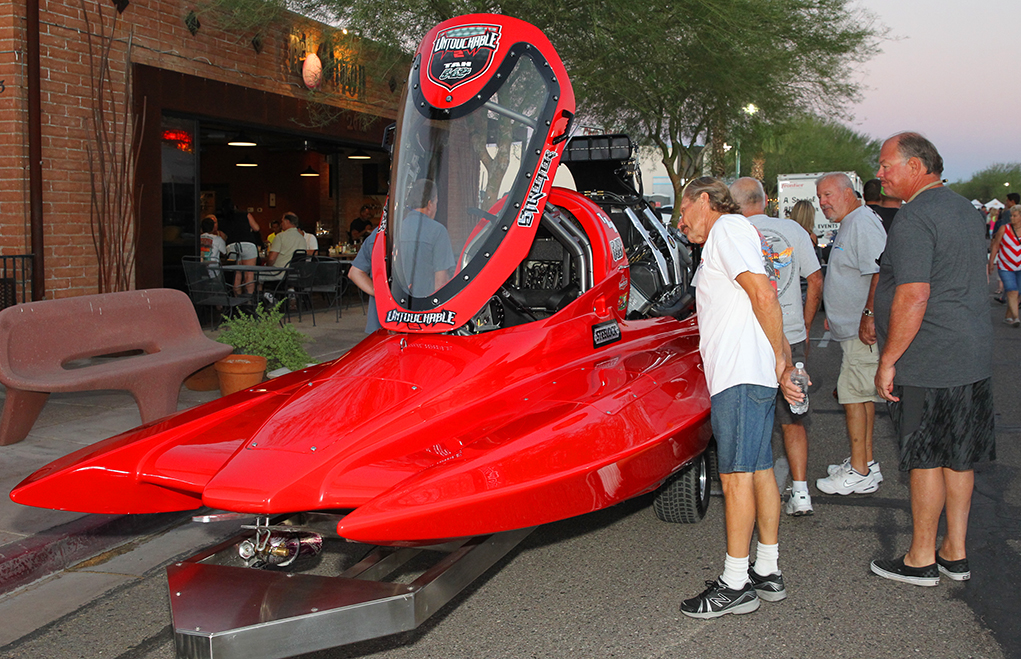 Fans of all ages turned out Friday for the Lucas Oil Boat Race Series “Fanfest” on McCulloch amid sounds of erupting engines and plenty of opportunity to meet-and-greet the drag boat drivers and teams. 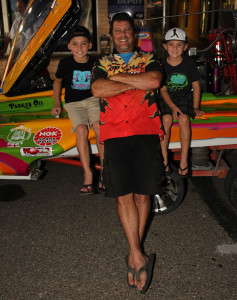 “I like them,” said 8-year-old Kaden Cesena, local third-grade student, of the drag boats. “I would drive it.”
Cesena guessed the boat would travel about 200 mph if he ever had his chance at the throttle of “Top Secret,” a Pro Mod drag boat based out of Lake Tepps, Wash.
Brother 6-year-old Kole Cesena said he wouldn’t dare drive the beastly watercraft, a point emphasized by a distinct shaking of his head.
“I like the front,” Kole said. “I like the color.”
The boat’s driver and owner, Shawn Reed, posed for photos with the local boys after helping them into the drag boat’s seat and then presented each with memorabilia poster cards depicting the drag race boat.
Dual-residents Linda and Doug Iverson, of Havasu and Seattle, Wash., had a view of the Lucas Oil Boat Races from their home Friday morning and were drawn out to Fanfest Friday night so they could take a closer look.
“Well, they’re noisy,” the Iverson’s said. “We’re just looky-loos, and it seems to be really happening down here.”
Farrell Crandall, of Lake Havasu City, said his attendance was much more specific.
“I’m here for the show-and-shine,” he said. “I want to hear the top fuel and top alcohol boats start up. It feels like an earthquake and makes me weak from the shoulders down.”
Crandall said he also enjoys saying hello to the drivers and teams.
Howard House, a resident of Orange County, Calif., traveled to Havasu for this weekend’s race event.
“I used to have one, but not as nice,” House said of the drag boats. He said he loves the race action and is set to take in the action this weekend.
Drag boat driver Travis Tutle, of Cleburne, Texas, was on hand at Fanfest with drag boat “Short Fuse” and was posing for photos, selling T-shirts for charity, and overseeing selected fans signing the boat’s hood. 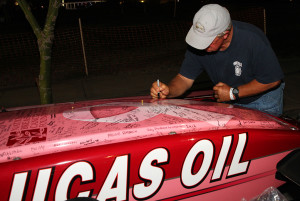 Tom Rouse signs one of the drag boats in honor of his wife, Judy, who is a ten year cancer survivor. Jillian Danielson/RiverScene

The all-pink drag boat is a Pro Outlaw category contender that turned out a 5.3 second run during qualifying Friday on Lake Havasu. The run recorded at 176 mph.
“My mother was diagnosed with cancer one year ago,” Tutle said. “All proceeds from the shirts and stuff I sell benefits the National Breast Cancer Foundation.
Tutle’s mother, Judy Tutle, is traveling to Havasu this weekend to watch her son race at top speeds in her honor of her survival status. Signatures have been gathered all along the race circuit beginning in Parker earlier this year.
Those selected to sign the boat’s hood are either breast cancer survivors themselves or family members of survivors. The hood is to be auctioned off Nov. 6 at the World Finals in Chandler. The proceeds also will benefit the Foundation, Tutle said.
The Lucas Oil Drag Boat Racing Series races resume at 8 a.m., Saturday and again Sunday in Thompson Bay. Spectators can best view the races from the beach at Rotary Community Park, 1400 N. Smoketree Ave. Entrance fees are $25 Saturday and $20 Sunday. Teens receive a $5 discount. Pre-teens are free when accompanied by a paid adult. Event parking is at Park Avenue and State Route 95, near the Aquatic Center.
For more information, visit www.lucasoildragboats.com.