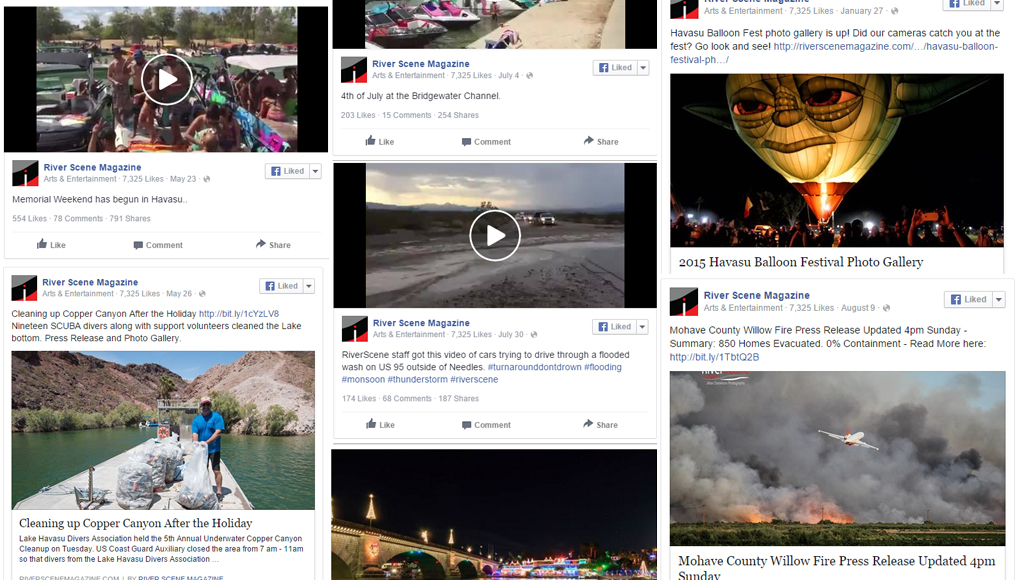 This has been an exciting first year for River Scene Magazine. Social media has been a significant part of how we showcase our beloved community and involve residents and visitors in that discussion.

By the numbers, we launched our online magazine in January of 2015 and have published over 524 combined articles, videos and photo galleries. We broadcasted, shared and published to our Facebook channel 2,005 times. That has resulted in a lot of shares, likes and comments from fans like you.

Let us take a look at our top ten most shared social media posts from 2015. Our Facebook analytics and data gives us insight into the community we have built. Some of the numbers that are measured are not publicly visible, but we wanted to share how we measured our top posts.

We ranked each of our posts by the total number of people who saw an individual post on the Facebook social media platform. Anytime a post showed to a unique person as they scrolled by can be counted as Lifetime Total Post Reach.

As we move into 2016 we are excited about the River Scene, new projects we have in the works and collaborating with talented folks from right here in Lake Havasu City.

Memorial Weekend has begun in Havasu..

RiverScene staff got this video of cars trying to drive through a flooded wash on US 95 outside of Needles. #turnarounddontdrown #flooding #monsoon #thunderstorm #riverscene

4th of July at the Bridgewater Channel.

Havasu Balloon Fest photo gallery is up! Did our cameras catch you at the fest? Go look and see! http://riverscenemagazine.com/story/lake-havasu-events/2015/01/havasu-balloon-festival-photo-gallery/

A 1000 Ft. SUPER SLIDE is coming to Lake Havasu down McCulloch Blvd on Sept.26! For further information, click on the…

Meet Havasu’s newest hot air balloon, inflating in Havasu for the first time this morning, Owlbert Eyenstein! Photo gallery of the inflation to come! Owned by Gary and Diana Moore

Here are our RSM fans Havasu Sunset Photo Gallery from 7/11/15. Thank you everyone for submitting, they are all beautiful! http://bit.ly/1eUrT81