Toys Being Readied For Havasu Children 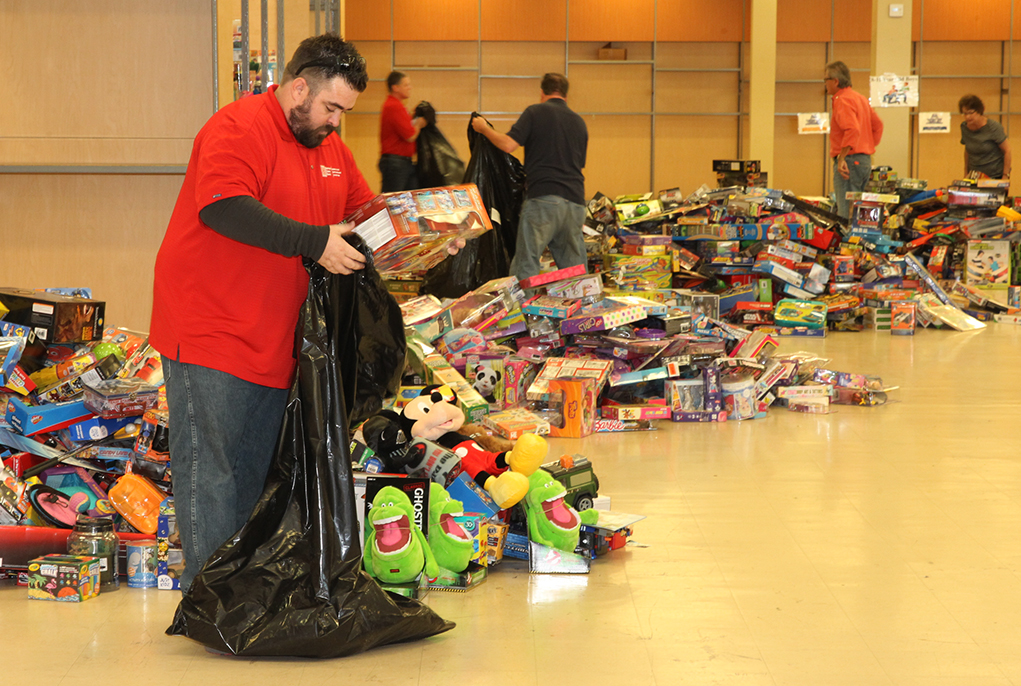 The Marine Corps League Detachment 757 and Kiwanis of Lake Havasu were out in force Tuesday to sort the toys donated by the community for the Toys For Tots program.

Detachment 757 member and Toys For Tots coordinator Ron White said at least 50 volunteers joined the League and the Kiwanis Club to help sort the toys. 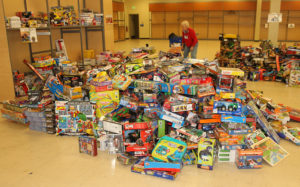 Toys sit in categorized by age group to be bagged for families. Jillian Danielson/RiverScene

“People have been just walking in and asking if they could help sort the toys,” White said.

It’s a big job. Volunteers pick up toys from donors all over Havasu, then take them to the sorting site.

This year, that site was the Halloween store at The Shops of Havasu. White said the toys must be sorted by boy/girl and different age groups. Signs are posted to designate the groups. Next, the toys are bagged and marked with the families’ names.

As the Coordinator, White received requests for toys from school nurses and parents. Next Saturday, parents will pick up their children’s toys. 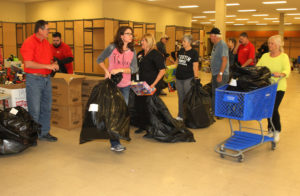 Toys For Tots was started by the Marine Corps Reserve in Southern California in 1947. Forty-one years ago, the Kiwanis of Lake Havasu recognized the absence of a Toys For Tots in town and they have been doing it ever since. When the Marine Corps League was founded in Havasu around 1995, they joined with Kiwanis since Toys For Tots is one of their responsibilities to the community.

Kiwanis hosts a golf tournament every year to raise money for Toys For Tots. Their tournament is the longest-running golf tournament in Lake Havasu. The Marine Corps League hosts a bowling tournament. Both groups sponsor fundraisers for the program.

Toys For Tots isn’t a one-day event. Both groups begin organizing in September. The Marine Corps League orders supplies from Toys For Tots and collection boxes are placed in businesses in October. As the boxes fill, volunteers pick them up, and they are stored in two storage facilities. About the middle of November, the Kiwanis sends out toy request forms to every school and pre-school in town, which are filled out by the parents requesting toys. Kiwanis picks them up the beginning of December. The store front soon fills up with toys brought in from Interagency and other Toys For Tots motorcycle runs.

The Toys For Tots National Foundation asks if donations are needed, and referrals are made. 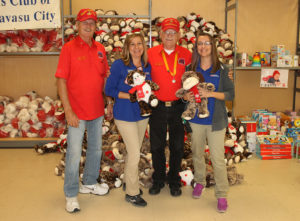 Represenatives from the Marine Corps League and Petsmart pose for a photo with donated toys Tuesday afternoon. Jillian Danielson/RiverScene

“Companies from around the country donate millions of toys to the campaign,” White explained. “This year alone we received two pallets of batteries, six pallets of Snoopy stuffed animals, 10 pallets of Hunger Games “Pop!” dolls  by Funko (9,720 to be exact), and numerous other donations from the foundation. There are over 550 Toys for Tots campaigns in the United States and all get numerous donations from corporations.”

The Marine Corps League and Kiwanis ask that parents go to The Shops at Havasu between from 8 a.m. and 1 p.m. to collect the toys. They must present their school forms at the doors. 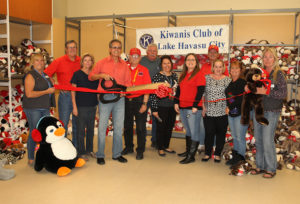 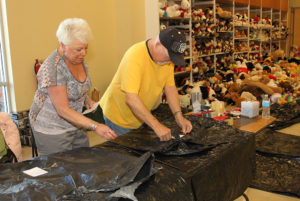 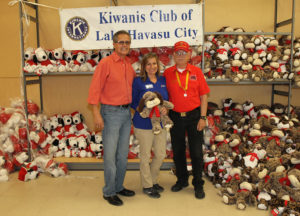 Representatives from Kiwanis, Petsmart, and the Marine Corps. League pose for a photo with donated toys Tuesday afternoon. Jillian Danielson/RiverScene 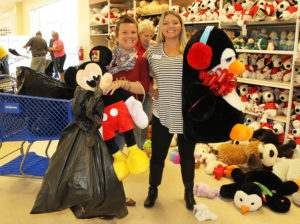 Representatives from the Chamber of Commerce pose for a photo while bagging toys Tuesday afternoon. Jillian Danielson/RiverScene 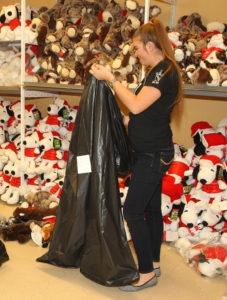 Samantha Hoffman of the LHHS Key Club places a stuffed animal in a bag for a family Tuesday afternoon. Jillian Danielson/RiverScene