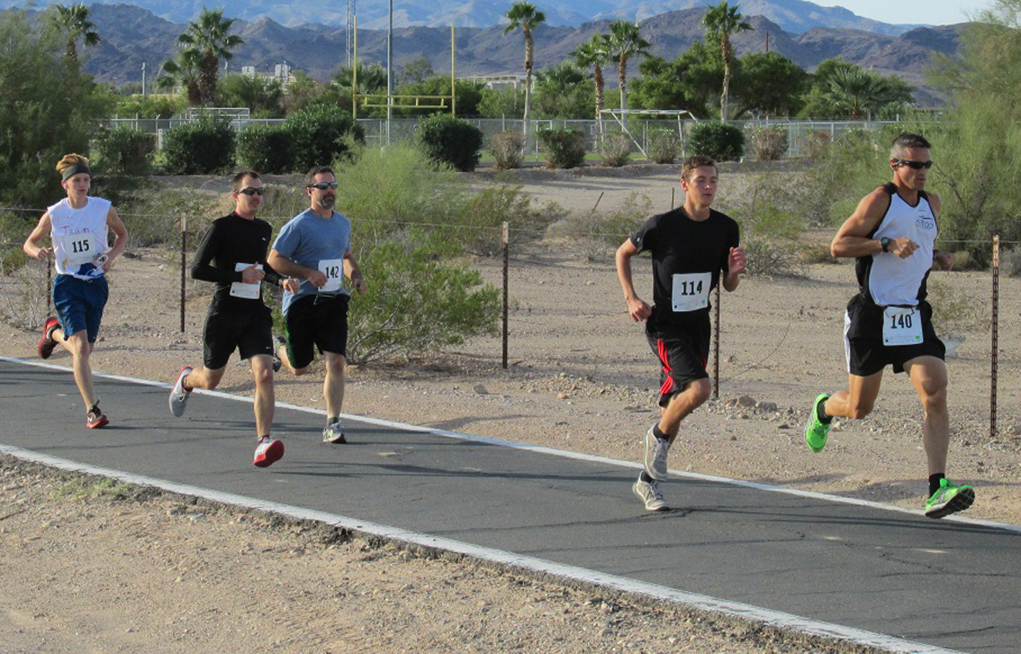 The course was about two-thirds of the Island walking/bike path, said run organizer Dr. Robert Novack.

“They cut through the Frisbee park and Grand Island Estates,” he said.

The event’s participants raced by age groups beginning from 12 and younger, to 70 and older. This year, the youngest participant was a 9-year-old girl, and the oldest was an 89-year-old woman who walks it every year. Both are of Havasu. 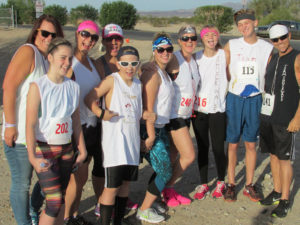 Team Shockwave pose for a photo before the 2016 Turkey Trot race. Jayne Hanson/RiverScene

Team Shockwave consisted of 11 runners, most of who stayed up last night eating tacos and making glitter T-shirts for the race. Shockwave Fitness is a new Obstacle Course Training fitness center in Havasu, at 2041 N. Kiowa, #106. The tight-knit group trains together, supports each other in fitness and in life, and spend their off time together engaging in healthy activity – such as the Turkey Trot.

“Today, we’re running for tacos,” Kindra Goodman, of Havasu. “We do this because it’s fun, I’m just here to sparkle.”

The Turkey Trot was Goodman’s second 5K race to date.

“I just want to get to the finish line,” he said.

Another runner, Patti Miers, of Havasu, has been running the Turkey Trot since 1991. Back then, her personal best time was 23 minutes.

“It’s a fun community thing, I like to do it,” Miers said. “I’ve never won the turkey.”

The race’s top prize is turkey gift certificates for the fastest male and the fastest female participants.

This year, longtime Turkey Trot contender and locally well-known marathon winner Dan Kuch, of Havasu, arrived first at the finish line having run the 5K race in 16 minutes and 57 seconds. 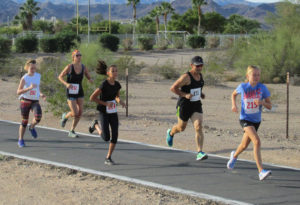 The first female runner to arrive at the finish line was 15-year-old Jordan Micheels, of Havasu, who ran the race in 21 minutes and 32 seconds. This was her first year participating. She was surprised at the notion of winning the turkey for her placement, having given her all during the competition without knowing.