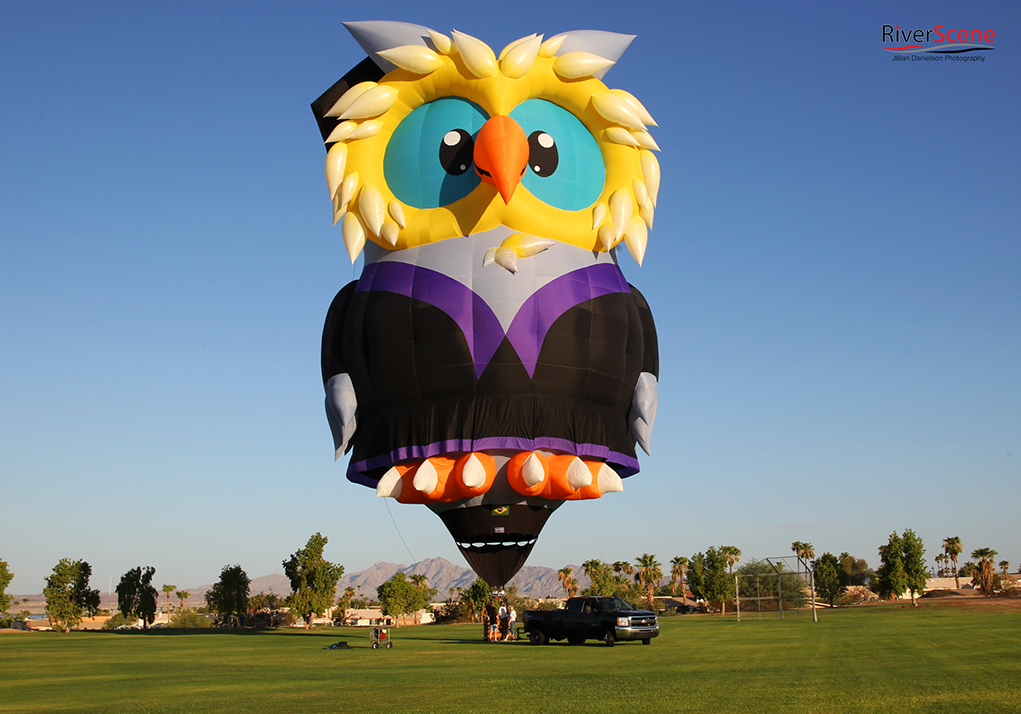 According to Becky Goldberg, flight ops pilot coordinator for the event, “For the 2016 Havasu Balloon Festival, there will be seven special shapes, sixty round balloons, and two corporate balloons.” 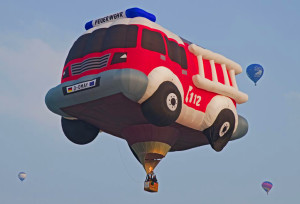 Goldberg, who has lived in Havasu for 24 years and raised her two children here, explained that hot air balloons have two types of special shapes: “true shape” and “appendage shapes.” Most special balloons start with the basic balloon and appendages are added to it, such as a head, arms and legs, to turn a normal balloon into a Teddy bear or something similar. But “true shapes” are designs that have such unusual shapes they can’t be created using a normal balloon. Without giving away all the surprises, Goldberg said among the true shapes signed up for 2016 will be a fire truck from Germany.

“True shape” balloons are very expensive to make and are highly desirable at balloon events. Because of their size and shape, they tend to spend a lot of time on the field instead of in the air, partly to allow visitors to see them up close.

Goldberg said she never had an interest in hot air balloons, but was asked the first year by her Rotary Club to volunteer. The third year, she was asked to coordinate the pilots. 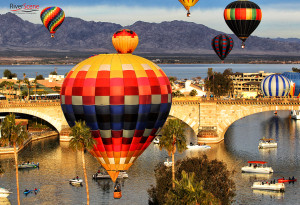 She thought the whole idea of ballooning was “silly.” But that was before she saw “Old Lady and the Shoe” three years ago. She was determined to not like the pilot because he was added at the last minute and caused her an inconvenience.

“But when I saw that balloon, I fell in love with it,” Goldberg said. “Now ballooning is in my blood.”

She met the pilot, Chris Jones of Amarillo, Texas, and in spite of her determination to dislike him, they became good friends. She enjoyed learning about ballooning from him, and before long, she became his marketing director and travels all over the world now to promote “Old Lady and the Shoe.” She recently returned from a ballooning event in the Philippines. Goldberg works full time for Jean Works Financial Service and said, “I’m very lucky and blessed that my boss is so accommodating about my passion.” 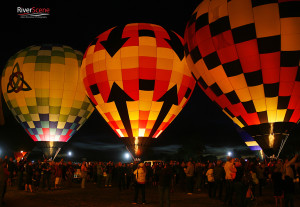 Bottom’s Up balloon (center) will be returning to the 2016 Havasu Balloon Festival. Jillian Danielson/RiverScene

In fact, Goldberg has become so enamored of ballooning that she is scheduled to begin a pilot’s ground class at Albuquerque, N.M., in February. Her goal is to own her own balloon one day.

Marquita McKnight, a member of the London Bridge Lion’s Club, said she loves working on Balloonfest because she gets to meet and work with a lot of people from all over the world.

“So every club is well-represented on the board,” McKnight said. 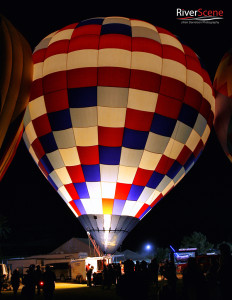 “Cheaper Than A Wife” balloon will be returning in 2016. Jillian Danielson/RiverScene

“We’ve been so happy to be able to help the community,” McKnight added. “The five service clubs share the profits, and each chooses which organizations in Lake Havasu to give their share to. Some divide the donations equally, while others prefer to give larger amounts to fewer groups, so the groups will have enough funds to complete big or important projects. Our Lake Havasu community is very, very generous.” She added that Lake Havasu’s Balloonfest is becoming so popular they have had 950,000 hits from all over the world on their Facebook page.

McKnight said the Balloonfest committee holds back a small amount each year to start the following year’s event, or in case of unexpected situations — a sort of “rainy-day” or “windy-day” fund.

When asked what the biggest challenge is to put together Balloonfest, McKnight responded, “Continuing to make the event exciting every year for all, and raising the funds needed.” She added that having only one bridge to the Island is also a huge challenge. It creates a bottleneck, and if there’s an accident near the bridge there’s no alternate route to the mainland.

McKnight stressed that she credits Constant Stoepler and Bob McCloy for putting Balloonfest in motion the first year. “I credit them with laying the solid foundation and structure for a successful event.”

McKnight urges visitors to get their tickets early, because last year the VIP tickets were all gone a month before the event. Vendors also should sign up early, as last year, all vendor spaces were taken several weeks before the event. 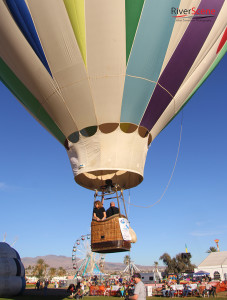 New for the 2016 Balloonfest will be a Fun Color Run that will begin at the London Bridge and end on the balloon field.

The Lake Havasu 2016 Balloonfest is set for Jan. 15 through 17, at the Nautical Inn on the Island. Balloonfest is an invitation-only event, with a waiting list of pilots who want to participate.

The Lake Havasu Balloonfest has been designated one of the top 100 events in North America by the American Bus Association. In fact, balloon pilots come to Lake Havasu’s Balloonfest from all over the United States, as well as from Canada, Germany, Australia, Belgium and other countries. 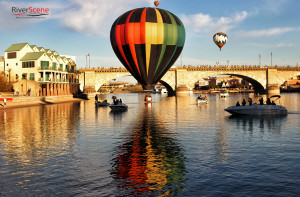 When asked how pilots feel about ballooning Lake Havasu compared to others balloon events, Goldberg said, “All of the balloon pilots love to come to Lake Havasu because they feel we treat them wonderfully. They love the scenery, and they love flying over the London Bridge. In fact, that’s on the bucket list for many of the pilots.”

More information can be found at http://www.havasuballoonfest.com/ and on their Facebook page: https://www.facebook.com/HavasuBalloonFest

The following photo gallery are special shapes that will be on display during the 2016 Havasu Balloon Fest at the Nautical Inn. 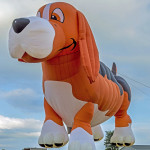 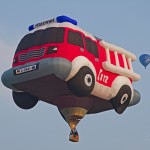 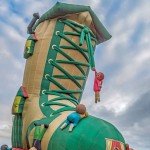 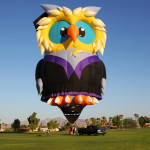