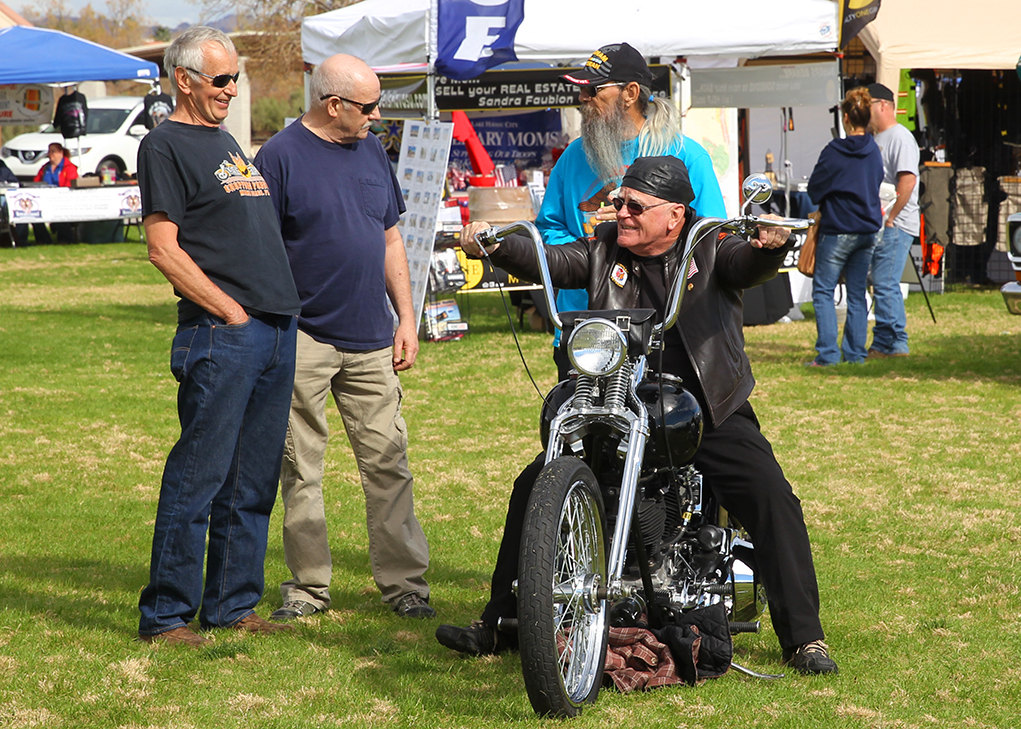 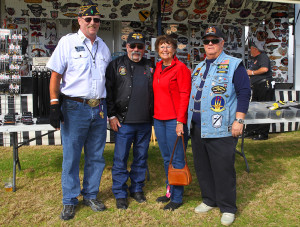 [dropcap]T[/dropcap]here is a common objective among the vendors, hosts, and spectators at the inaugural “Legends of Route 66” Bike Build-Off in Lake Havasu City: support the local veterans. The three-day event, hosted by Veterans United Arizona, raises money to benefit homeless veterans, at-risk veterans, and their families. Sixty vendors from six different states are participating in this year’s build-off. Spectators can enjoy several activities, including concerts, motorcycle drill team exhibitions, and bike building competitions. A variety of food is also available. Sandy Seedorf, event coordinator for Veterans United Arizona, said the main mission is to eventually build a homeless shelter for vets and their families. Seedorf talked about the kind of positive changes that can result from these types of events. “Last year 19 homeless Lake Havasu vets were taken off the street. One veteran was homeless for 11 years. He now has his own apartment,” she said. “We also want to make this the hub for veterans to come and enjoy themselves and forget about what they did in the war.” Seedorf added. “It’s a mission of passion to make sure our veterans know we haven’t forgotten them.” “It’s not your typical motorcycle event, “Loel Seedorf, Sandy’s husband, said of the Build-Off. [quote_center]“It’s a mission of passion to make sure our veterans know we haven’t forgotten them.”[/quote_center] The event not only supports local veterans; there is a chance for students to get involved with the bike build-off, providing a unique learning experience. The Lake Havasu Police Department donated bicycles to several teams of students who chose to participate in the competition. The teams developed plans to customize their bikes, learning hands-on skills in the process. Sandy said she hopes other students will be inspired by their peers’ work and join teams at next year’s event. 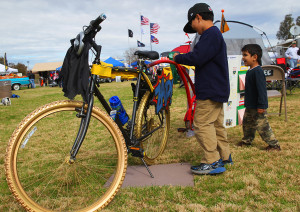 Jeff and Jake Stone look over a bike Saturday morning, that was built by one of the elementary schools for the Bike Build Off. Jillian Danielson/RiverScene

Mayor Mark Nexsen, who was present to read a proclamation, said, [quote_box_left]“All in all I think it’s a great first-year event. Trying to end veteran homelessness is a great cause. It’s something we have been working on as well through the Veterans Court.” [/quote_box_left]

A veteran who prefers to be known as “T.C.” said he enjoys the event for “the ability to get out and be amongst my peers.” “Any organizations that will help out homeless vets just touches my heart. It touches my heart that there is so much attention given to the vets right now,“ said Thomas Stempinski, a U.S. Navy veteran and American Legion Rider. “We come from the era where we were ashamed to put on the uniform when on leave, because we were criticized so bad for it. Now they (veterans) are honored and I’m glad for it.” Wayne Legrand , a volunteer with Interagency and Sunrise Rotary, volunteered at the Mudshark Brewery Booth for the Bike Build-Off. “I can’t think of a better cause to support,” said Legrand, whose grandfather served in the Army during the Vietnam War. He will definitely come back next year to volunteer because “the vets need as much support as they can get.” 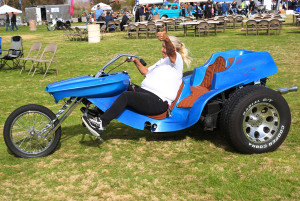 Frankie Lyons rides a Trike across the grass Saturday afternoon during the Bike Build Off. Jillian Danielson/RiverScene

Todd Evensen, a counselor with the Vet Center, volunteered at the Department of Veteran Affairs mobile center, which provides counseling rooms to vets, among other services. Evensen said he hasn’t provided counseling services at the event so far, but he enjoys speaking to veterans and hearing their stories. “There are so many positive people who are having fun and they’re experiencing something new that this city hasn’t done,” said Frankie Lyons, President of Veteran’s United Arizona. She explained that some vets are not aware of the benefits that are available to them and, in addition to raising funds, the Bike Build Off is a great channel for veterans to get information about what services they can take advantage of. Service organizations such as the American Legion, VFW, and Marine Corp League support the Bike Build-Off and will raise money to hold the event again in 2016. The $5 adult entrance fee directly supports local vets. In addition, children 16 years old and younger can “pay” their entrance fee with a canned food donation, which is then donated to local veterans in need.

The Harley Davidson of Scottsdale Drill Team performs Saturday afternoon at the Bike Build Off.

One Response to “Event: Bike Build Off”