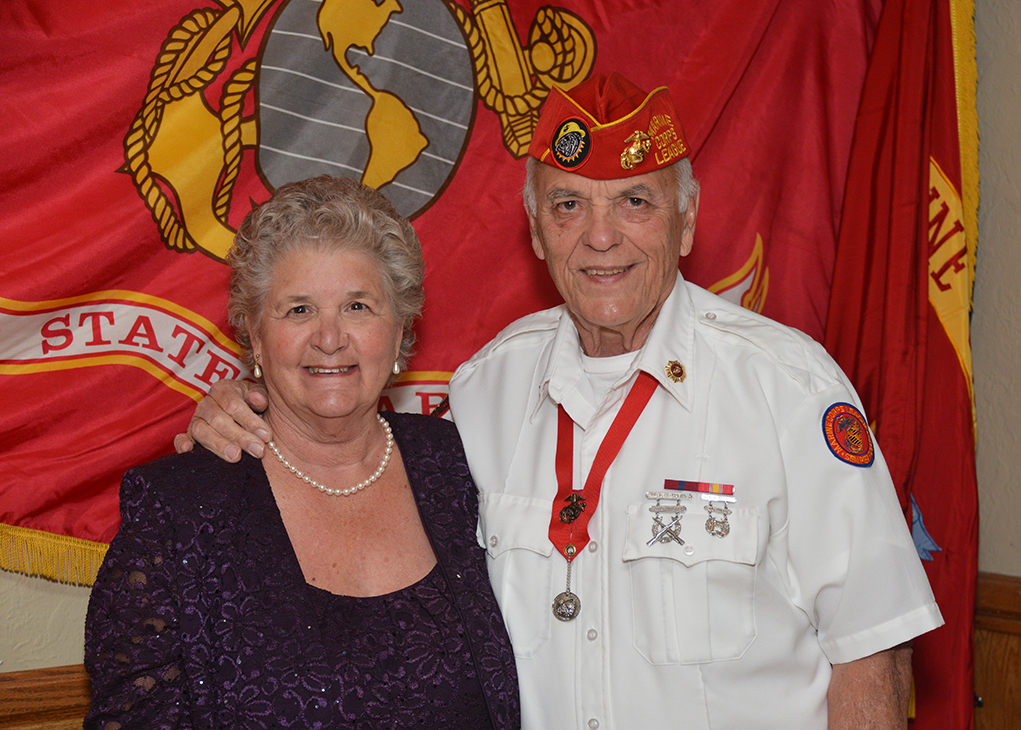 He can be seen at every Marine Corps League event, camera in hand, recording for posterity untold numbers of memorials, meetings, Marine Corps Balls, fundraisers and other events. He is the person the League counts on to photograph every tiny detail of its events. 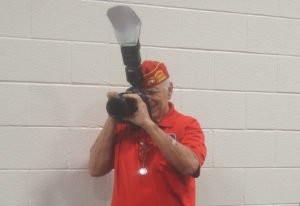 Ron Silva didn’t declare as a young boy that he wanted to be a photographer one day; instead, he always knew he would be a Marine.

Silva was born and raised in Rhode Island and had one older brother. As did many other young boys during that time, at 12 years of age he delivered newspapers after school and on weekends and also set up pins in a bowling alley after school until 11 p.m. Monday through Friday and half a day on Saturday.

“At around 15, I began working at a local amusement park during the summer also,” Silva said. “At 16, I was delivering newspapers before school in the morning and working at an icehouse after school from 4 to 8 p.m.” 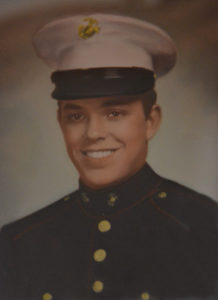 Silva graduated from high school in 1956 when he was 17 and took a job as a counterman in a local restaurant until September, when he did what he always had said he would: he became a Marine.

“I was 17 at the time and spent my 18th birthday in boot camp on Parris Island, South Carolina,” Silva said. “Following boot camp, I went to Camp Geiger, a satellite facility of Camp Lejeune in Jacksonville, North Carolina, where I went through four weeks of advanced infantry training.”

“Following AIT at Camp Geiger in January of 1957,” Silva continued. “I was then sent to the 8th Tank Battalion as a Tank Crewman. Within just a couple of weeks, or less, I was told I would become the Company Armorer. At the time, the only thing I could do was field strip an M1 Garand rifle. Being put in the armory was somewhat overwhelming seeing I now had 17 each of 50 caliber machine guns, 30 caliber machine guns, 45 caliber submachine guns, as well as 100 45 caliber Colt 45 pistols (a Tanker’s assigned weapon), and about a dozen M1’s. However, I soon became familiar with the disassembly and assembly of all of the above as well as diagnosing any firing problems and fixing and or repairing the same. 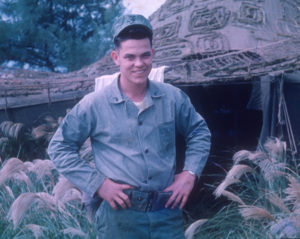 “Around May of 1958, the 8th Tank Battalion was demobilized and I was sent to the 2nd Tank Battalion. I was only there until I was given orders to go overseas, Okinawa. I went home on leave in July and reported to Camp Pendleton in September and was invited to spend 21 days on the Troop Ship USS Breckinridge, which took us to Okinawa. I became the Company Armorer in A Company, 3rd Tank Battalion until leaving approximately one year later, again spending 21 days at sea on the ‘Breckinridge.’”

One of the highlights of Silva’s service in the Marine Corps was receiving an award from a Marine that he had read about when he was 13 or 14 years old. Lt. Colonel David M. Shoup had been awarded the Medal of Honor for his heroism in the Battle of Tarawa in 1943.

“I had read about and admired him as a real Marine,” Silva said. “I read the book, ‘Bloody Tarawa.’”

Then, one day in 1959, the company clerk came over to Silva’s Armory and told him he had to go to headquarters. He had no idea what was going on and a jeep driver took him to the office of three-star Gen. David M. Shoup.

“The General, my hero, gave me a “Leatherneck Award” for a high qualification with the rifle from when I qualified about a year earlier. It was ironic that the Marine I had held in the highest regard and who was my choice of a true hero was now presenting me with an award.” 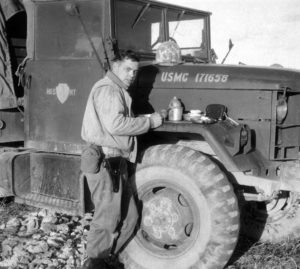 Silva completed his military service in September 1959, and he went home to Rhode Island. He held a few jobs and one year after his discharge he and a friend went to Southern California. He drove tractor-trailers for seven years before returning to Rhode Island once again. By then, he was married and had two children, with another due in November. He was looking to transfer into the local Teamsters or into a trade of some sort. In April of 1968, he had the chance to get into the piping industry as a sprinkler fitter, installing fire protection systems. But many of the jobs he worked on meant leaving early Monday mornings and returning Friday evenings. Because apprentices started at a low pay, he also worked Fridays and Saturdays from 6 p.m. until closing at 2 a.m. at the same restaurant he worked at after graduating from high school. He did this for almost three years when he eventually was making enough to allow him to spend more time with his family.

“I never ran for any positions,” Silva remarked, “but I get re-elected every year anyway.”

Even though he now lives on the other side of the country, Silva still gets phone calls from Little League officials in Rhode Island asking for advice because he had so many years of experience. He still helps the League by running their safety program, obtaining necessary permits and taking care of other paperwork. There is a baseball field and a tournament named after him. 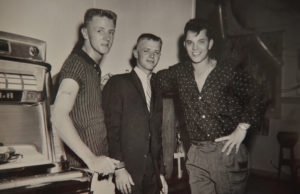 Then, in 1968, a completely different career came into Silva’s life.

Silva had taken a team picture of one of his sons’ Little League team. The following year, he was asked by a few other coaches if he would take photos of their teams. The next year, the official photographer did not show up, and the League asked Silva to photograph all the teams. He was now the official League photographer. And the following year, he was asked by five Little Leagues and three Pop Warner Football leagues to do their photos — and his new career took off. He was soon recruited by basketball leagues to do their photography, and before long, he was sought out to photograph weddings, class reunions, family reunions, schools and other events.

This new career meshed well with his construction jobs because most events he photographed were on weekends. When he finally retired from construction in 1997, he continued with his photography business full-time.

Silva remarried in 1996 to a woman he had known for about 15 years. Donna coached a Little League team and also was on the Board of Directors. Donna helped Silva in his photography business, and they also began to visit Lake Havasu because Donna’s parents lived here.

They decided to sell the photography business in 2012 and in 2013 they moved permanently to Lake Havasu.

One thing that Silva had not done in all these years was become involved with a military service organization. But in 2009 he had flown into Rhode Island and in the airport he noticed a group of men in red Marine Corps League jackets. He was wearing something with “Marine Corps” on it, and the men approached him. Within a few minutes they had recruited him to join Detachment 1285, and he soon became their official photographer. 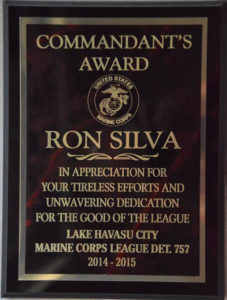 In 2010, while visiting Lake Havasu, Silva was at the swap meet and met George Link, owner of AZ Flags and Flagpoles, who proceeded to recruit Silva into Havasu’s Detachment 757. A few meetings after he joined, the then-current photographer announced his retirement and the Detachment needed someone to take his place. Silva said he would help—and he has been Detachment 757’s official photographer ever since.

It’s easy to see that Silva loves photographing people. He manages to catch the most delightful moments, especially involving children. But some people hate to be photographed, so he has to use a little subterfuge to include them, such as pretending to just need an extra person in a photograph of the main subject.

“No one ever cares about having their picture taken at the time,” Silva says, “but 10 or 20 years from now, they appreciate that picture.”

Many members of the Lake Havasu Marine Corps League are up in years, and over the past few years, the League has lost many members.

“Over the years, many of those in the photos have passed away,” Silva recently wrote, “and yet we still have them with us through the photos.” 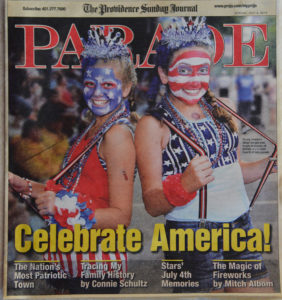