What A Hoot In The Havasu Heat 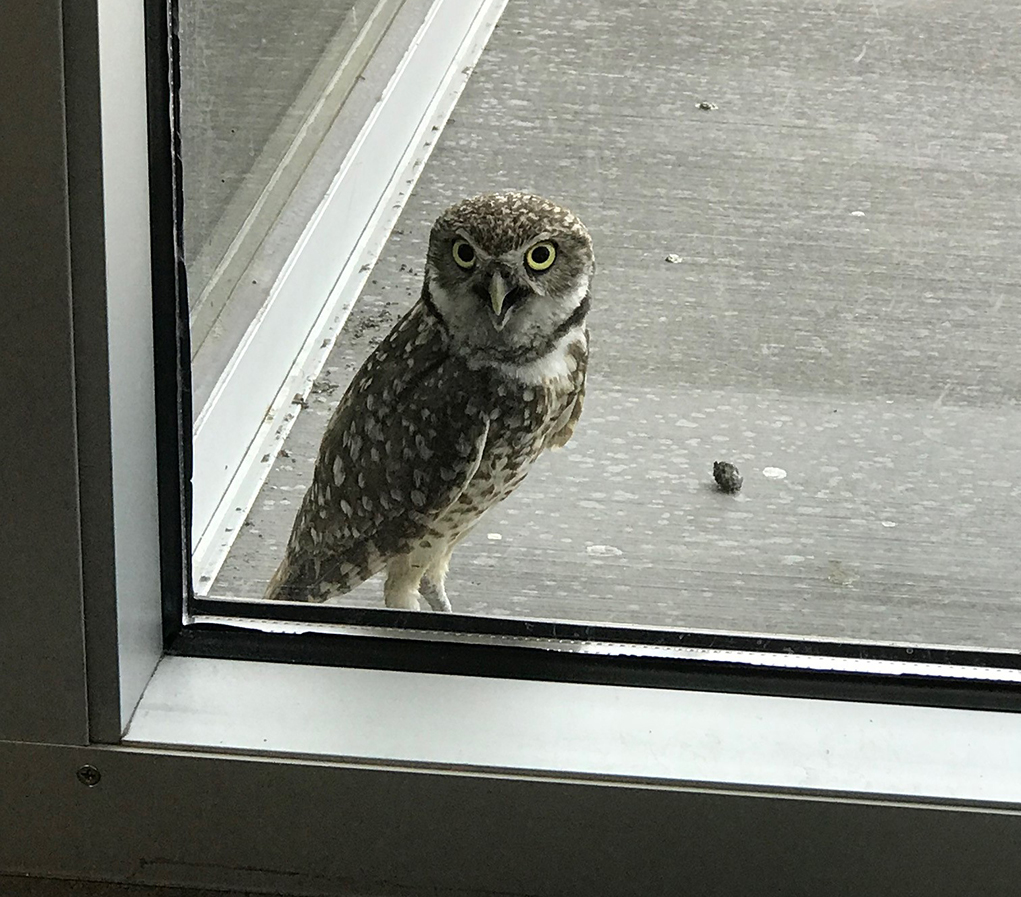 What a hoot it has been for staffers at the local U.S. Bureau of Land Management office as a burrowing owl has taken up visiting their doorstep during Havasu’s midday triple-digit summer temperatures.

“It was here last Thursday and Friday,” said Valerie Gohlke, Public Affairs Specialist, who works there. “He or she showed up about one o’clock in the afternoon and stayed two or three hours.”

Attempting to identify the raptor’s gender is difficult because there aren’t many gender identifiers. Both males and females have long legs and no tufts in their ears, she said.

“The females can be larger, bulkier, and the males tend to be longer and their wings are tipped,” Gohlke said. “The females are known to hunt during daytime hours when they are feeding babies.”

Outside the front doors of Havasu’s BLM office, the burrowing owl had its wings puffed out and it appeared to be panting.

“At first, we thought it was in distress,” Gohlke said. 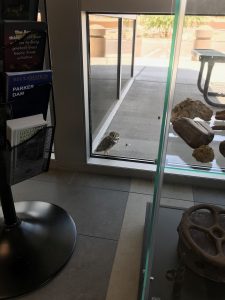 According to the agency’s recent Facebook post, BLM Biologist Ford Mauney suspected the owl was looking for a reprieve from the afternoon high temperatures and sought the shade of the building.

Gohlke also said local raptor experts of Arizona State University assessed the visiting owl and reported it to appear in good health. On that note, BLM staffers have enjoyed the owl’s unique visits, they said, and they continue to hope for its return. A bowl of water has been placed in the owl’s chosen spot outside the front doors by the lobby’s corner entry windows.

Burrowing owls typically live in burrows in the ground such as abandoned prairie dog dens. The species also makes a hissing sound, like a rattle snake, in an attempt to ward off natural predators.

According to www.audubon.org, the burrowing owls prominently live in Arizona, California, New Mexico, Texas and Florida in the U.S., and in Mexico. These owls are listed as climate endangered with Audubon’s climate models predicting that 77 percent of their current breeding range is at risk for loss to modern agricultural practices.

The website also notes that artificial burrows may curb dwindling populations as the burrowing owls aren’t shy about moving into the man-made shelters when provided by conservationists.

One Response to “What A Hoot In The Havasu Heat”