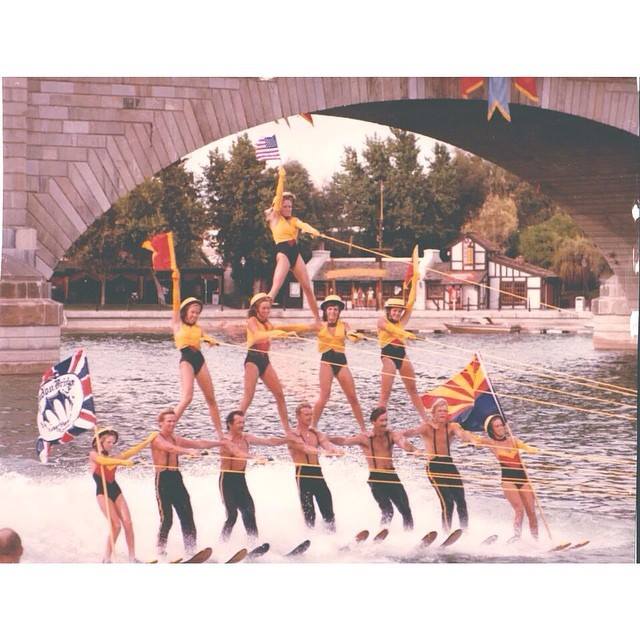 The draw of Lake Havasu was strong enough that it brought Robert P. McCulloch with his primary focus of testing high-performance boat engines. But McCulloch was a visionary who saw that more than just a test site, there was the perfect opportunity to create a completely new city in the desert.

Lake Havasu provided the backdrop and McCulloch and his sidekick C.V. Woods created the rest.

While the burgeoning area had long been a fisherman’s nirvana, the new development brought more people to build not only the city, but to work to reconstruct the London Bridge across the Bridgewater Channel after McCulloch’s purchase of the landmark.

With those who came to work and live, came their children and other young people with few options for them, so the lake became their playground.

“The Lake Havasu Tournament Ski Club started in the spring of 1979. This club was put together with about 15-20 avid water skiers that wanted to train and compete in tournament skiing,” said Havasu Pioneer and one of the organizers Pat McCormick. McCormick said he recalls those days as some of the best times of his life.

“Early Havasu didn’t find many young people and the lake was truly our recreation place. The club was started for the skiing aspect, thoughts of ski races, and expanded from there. I wasn’t the avid water skier and my contribution was being the secretary/treasurer,” said early member and Havasu Pioneer Missy Wood.

McCormick said the form of skiing was called three-event skiing where competitors could ski on a six-buoy slalom course. 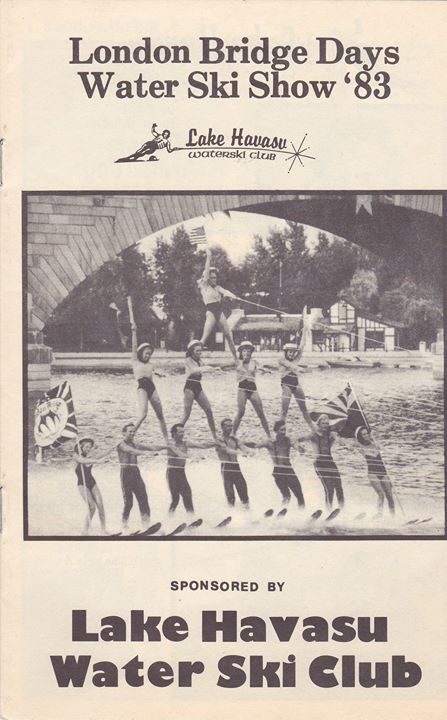 “Once the skier reached the maximum speed for their class, the officials would start shortening the rope to make it more difficult. The second event to compete in was Trick Skiing. This is where a skier would have two 20-second passes to complete as many tricks on a trick ski as they could. The last event was the Ski Jumping competition. The skier would be given three passes at a jump ramp to try to jump/fly the farthest,” McCormick said.

McCormick said over the years, the club would have a couple of slalom courses set up on which skiers could practice. Trick skiing could be done anywhere or any time by just finding an empty cove and boat speed would be between 14-17 mph so that was simple to accommodate.

“As for the jump ramp, our club members Wendel Beckwith and Jim Hoover got the plans from the American Water Ski Association and the group built this ramp in the parking lot of the marina. Once launched, we kept it in a cove on the California side and when club members wanted to use it, we had to move it out and secure it with large anchors,” McCormick said.

McCormick said the ramp itself was originally built for Tommy Bartlett (of the famed Wisconsin Dells Water Ski Shows) with the help of Mike Murphy from the Parker Strip. The electronic company NEC wanted to film a commercial on Lake Havasu involving water skiers and the jump ramp and after the shoot, Bartlett sold the ski club the ramp for $1.

“Over the years, the club would hold local tournaments and compete against each other for bragging rights. Some of us would venture off to Long Beach Marine Stadium or to Wet Set Village, Sundowner Lakes or Horton Lakes which were large waterski complexes outside of Barstow where we would compete against many skiers out of the southwest region,” McCormick said.

Waterskiing was big in the ‘80s. Jim and Wendel, with their passion for water skiing, opened up the Water Sports Center located at the Nautical Inn,” he said.

It was Havasu’s first waterski pro shop. The shop opening was in 1983, and it was about this time that the club got more involved in local ski shows.

“Few of us were still competing but we all got involved in putting on ski shows. Our membership grew and we started by putting on shows in front of the Nautical Inn. Back in the ‘80s the 5-mph buoy line was not where it is now closing off most of Thompson Bay, but maybe 100 yards off the shoreline,” McCormick said.

The club obtained Coast Guard permits that allowed participants to put on the shows and with the questionable conditions of the water out on the lake, some of the performances suffered, according to McCormick.

“We eventually came up with the idea to apply for Coast Guard permits and put the shows on under the bridge. That happened and our shows got bigger and better,” he said.

The show director was Donny Armstrong and the shows lasted about an hour under the London Bridge. The shows were performed every other Saturday during the summer months. 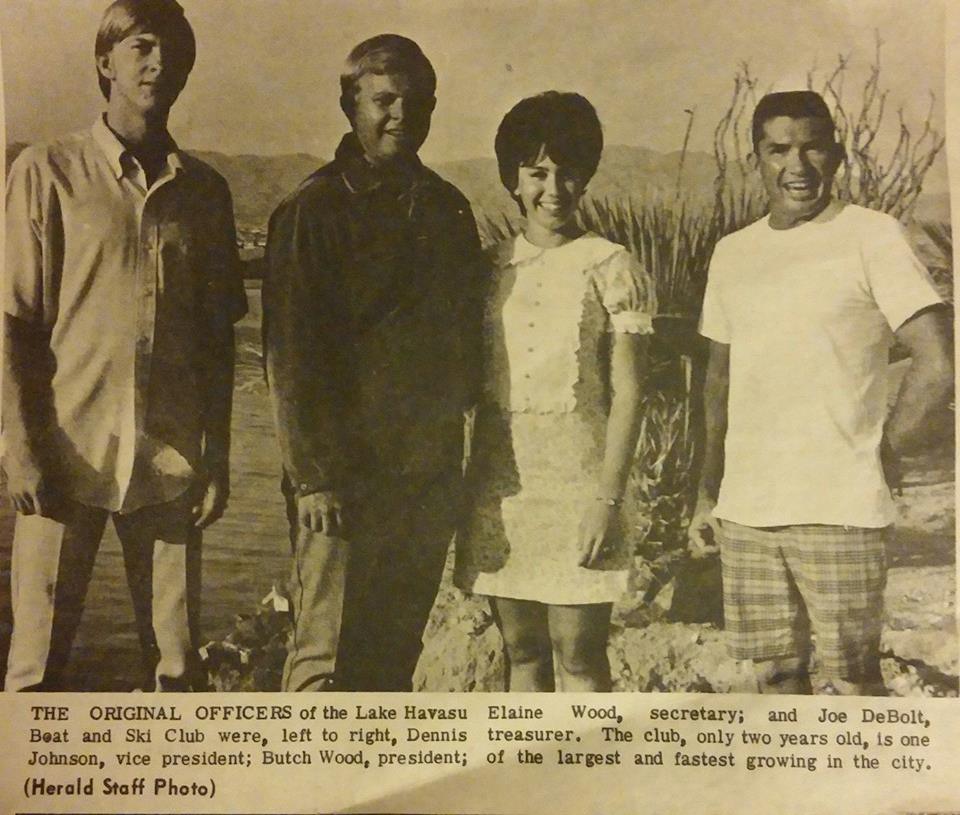 “Many people visiting would line the Bridgewater Channel with their boats, chairs and it was always standing room only. Shows started at 5 and the channel was closed for the event. Back then, we didn’t have the docks along the Bridgewater Channel that we do today and we were able to drive our MasterCrafts, Ski Nautiques and StyleCraft boats towing our skiers through the arches as they showed off their talents,” he said.

Club members would start with a six-girl flag line, hot dog slalom, barefoot skiing, swivel skiing, ballet skiing, hydrofoil skis, around the world skier where the boat driver and skier coordinated the skier skiing around the front of the boat. There was two-skier slalom crisscross, skiing over the jump ramp and the show always ended with a 12-person three-tier pyramid.

The shows lasted four or five years and stopped due to expenses and other issues, McCormick said.

“But by far, those were some great times. A lot of us still live here in town and have taken on other interests but for myself, I still get out and ski often and even last year our announcer Tony Castleforte and I went out and did some barefooting.

“Yep at 65 and 63 respectively, we were sore the next day,” McCormick said.

Recalling some of her fondest memories of the club, Wood said, “Yes, the Polar Bear Race in January came about, the Young Americans (not sure if that was exactly what they were called), skied in formation under the London Bridge. They were very impressive and sure brought tears to my eyes seeing them ski while holding flags – so much practice went into that endeavor.”

Time marched on and the club became a part of the history of Lake Havasu.

Wood said Karl Fuhrman (who had been founding member Butch Wood’s right-hand man) moved to Phoenix. She said new members had other ideas and the dynamics of the group changed and the original group kind of disbanded.

“Butch and Karl and the others love for the water, boats and skiing kept the ideas and fun flowing all the time,” Wood said.