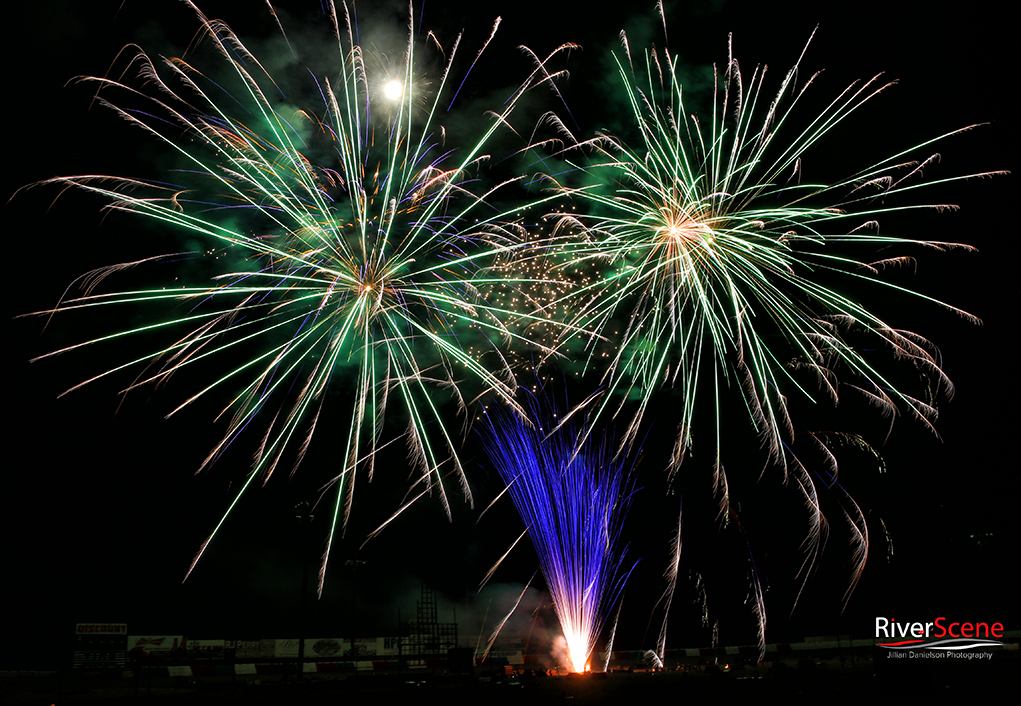 Winterblast’s 600 Western Pyrotechnics Association members this year are motivated by a number of factors when it comes to their unique hobby. Some shared the reasons “why” behind their travel to Lake Havasu City for the show.

“I like the science,” said Thomas Wahlhieter Jr., of Fontana, Calif., who has attended Winterblast eight times. “I just like all of the chemistry behind it. Legally, I can enjoy the art and the manufacturing. I’ve been doing this since I was 18 and I just turned 24.”

“Legally, I can play with explosions,” said Ed Osdale, of Anaheim, Calif., who has attended seven times. “I like knowing what goes in the shells, the different chemicals that mix to make the different colors, and knowing about the different powdered metals.” 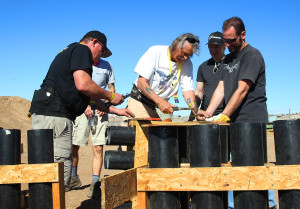 Members of ExpoShows and Devestating Pyrotechnics get ready for the Grand Showcase which will take place Saturday evening. Jillian Danielson/RiverScene

Sometimes, it’s a matter of it being an outlet after a 1986 fireworks ban in California.

“I got into this because I needed someplace to shoot fireworks since there was a ban,” said Lonny Ross, of Devastating Pyro, in Fremont, Calif., who has attended twice. “Since then, I’ve been finding other ways to enjoy fireworks. I’ve always been fascinated with what happens behind the scenes.”

Gina and Victor Papini traveled from Sacramento, Calif., and have slowly progressed into the craft since 2009.

Also, with Gina’s husband Victor so interested in the art of fireworks, it was a matter of joining them if you can’t beat them.

“It was either this or I would get left at home a lot,’ she said. Gina is teaching the Mine Building class during the event’s seminar line up. Other event aspects are trade shows, safety orientations, vendors and open shooting opportunities. 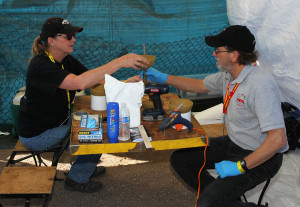 Husband Victor was enamored from the time he was a child.

“When I was 5 years old, I broke my arm watching kids light fireworks,” he said. “That was when I was hooked.”

Victor admits that some things that transpired in his front yard over time had many suggesting he should go professional with his hobby.

“Now I can do fireworks, legally,” he said.

Winterblast returns to Havasu every year. The venue has much more infrastructure and therefore geared toward hosting public displays when compared to other WPA events.

Event co-chair Kurt Medlin, of West Hills, Calif., who is a founding member of WPA, said he really loves it here. 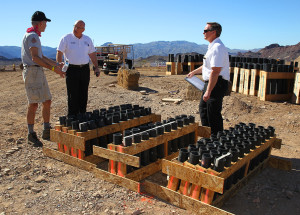 Lake Havasu City Fire Department inspects the fireworks that will be launched during Winterblast. Jillian Danielson/RiverScene

“They are so gracious and tolerate us so well,” Medlin said. “Not everyone wants this in their backyard.”

Medlin said this is a great place for the 600 WPA members to practice their art of manufacturing and public displays. His specialty is in the rockets that spin and take off, he said.

Winterblast is the largest of three shows in this part of the country when it comes to WPA. It is unique in comparison with its organized, public displays and opportunity for members to purchase fireworks versus having to build them. The other two events are smaller in scale and both draw WPA members into the wide-open Nevada desert.

Western Arizona Humane Society staffer Brandi Engler advises leaving music on for pets to help filter out the sound of the fireworks. Providing hideout opportunities under beds or in closets is ideal. Don’t leave pets outside and don’t take them to the event. Avoid dog parks. Clothe them with a snug-fitting shirt or other article of clothing because it helps them to feel safe. Also, some retail herb stores offer natural calm-enhancing products such as lavender that can be dropped in water to help soothe nervous pets.

No alcohol other than in designated areas within Havasu 95 Speedway. No pets. One parking space per vehicle is allowed, no E-Z up tents in parking lot, and no coolers or food items allowed into the Raceway’s spectator area. Please ensure car alarms are turned off. No private fireworks are allowed on site. 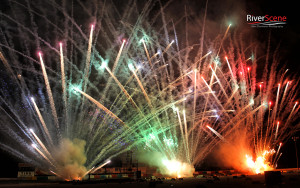 Fireworks burst into the sky during the 2015 Winterblast ground show at Havasu 95 Speedway. Jillian Danielson/RiverScene

The 27th annual Western Winter Blast Pyrotechnics Show is in town through Sunday at SARA Park. Fireworks displays are from 5-10:30 p.m., nightly, with organized shows beginning at 7:30 p.m. The largest Grand Public Display is Saturday. Gates open at 3 p.m. Admission is $5/day per person. Children 12 years old and younger admitted free. Parking is $5/vehicle per day.

Enter SARA from State Route 95 at Dub Campbell Way. Parking is accommodated at Havasu 95 Speedway and the ball field. Limited parking available at the BMX track and those parking there will not be permitted to walk to Havasu 95 Speedway. No parking is permitted along the shoulders of the highway. Early arrival is encouraged. Large crowds are expected. For more information, visit www.westernpyro.org.