Working For The Man – Early West, An Authentic Havasuvian 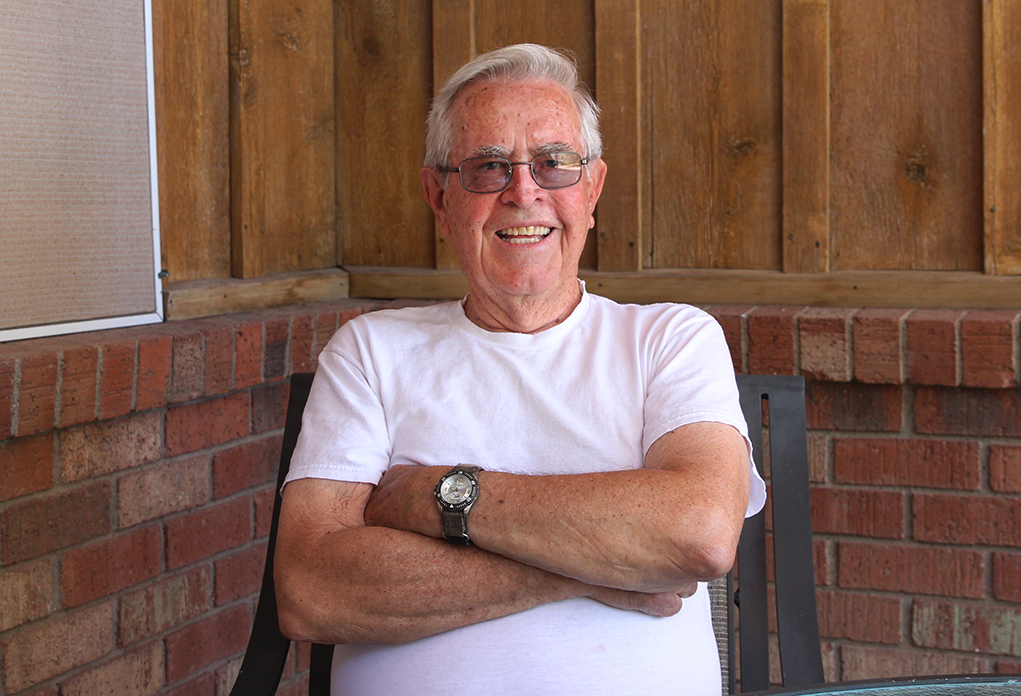 Early West, 84, of Lake Havasu City, worked for Robert “Bob” McCulloch for 40 years and was among the first to move from Los Angeles, Calif., to this dusty, desolate landscape when this city simply was McCulloch’s vision.

“He called me ‘West’ but I never really did get to know him personally,” West said. “He was a real friendly person. He really had a great sense of humor.”

McCulloch hired West in 1955 to work at a factory near the airport in L.A. West was 23-years-old at the time, and McCulloch was 40-years-old. 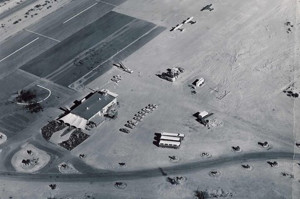 In the early 1960s, West was summoned to travel to work at a factory in Havasu that was situated near the old air strip on today’s island by Site Six. He worked in a test shop there, often testing outboard boat motors on the waters of Lake Havasu.

“It was the saddle oxfords coming up the aisle – that was all we ever would see of him was those brown-and-white saddle oxfords,” West said. “He was a very intelligent man, a good engineer, and he had great vision. He saw things that ordinary people like me just don’t see.”

One cloudy day McCulloch showed up at the shop, looked around, and said a few words to the workers, West was included.

“We both got us a cup of coffee,” West said. “We were standing out on the peninsula, near the air strip there, looking back out over these hills here and Bob said: ‘Guys, I can see a city. There’s going to be a city out here, I’ve got it all worked out.’ All I saw was hills of dirt.”

Soon, McCulloch sold his L.A. factory in the mid-1960s. He approached West to make the move to Havasu, offering special pricing on land plots and new home construction for employees. West’s first answer was ‘no’ because there was nothing here. But, McCulloch was there, as was West’s livelihood.

West paid $2,500 for his choice lot in central Havasu. The deal was $28,500 for the lot and new home construction. McCulloch also paid closing costs when the West’s sold their California home, another relocation perk. West and his wife – currently of 64 years – Aldena June West, had the home built in 1971 and moved in. The city’s roads were dirt. It was 15 years with a private drive until others moved in and set up homes on surrounding lots. 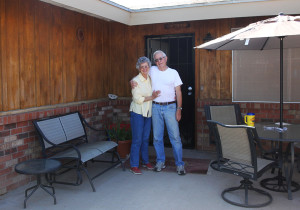 Early and Aldena pose with the house that they still reside in. Jillian Danielson/RiverScene

“We bought dirt bikes and headed out in any direction we wanted,” West said.

Today, every nearby lot is built out and there are four generations of West’s living in Havasu.

West told tales of McCulloch attending work functions, but usually alone. McCulloch was no pauper when he married his wealthy wife, Barbra Ann Briggs, who was the heiress to the Briggs and Stratton fortune. It stemmed from 4-cycle engines largely used in lawnmowers and mini bikes.

“I didn’t know of her participating in any company functions,” West said. “She had her own life.”

The work functions always were casual dress, he said.

In early spring each year, West recalls a brand new Lincoln – always red – was dropped off for the boss. Automatically, every year they’d drop off the new automobile for McCulloch and take the other one away, he said.

Through the years, West got his hands on McCulloch’s chainsaws, U.S Navy drone engines, a failed golf ball ejector, and air saws. West also worked as a machinist and prototype mechanic. It was he who helped coax McCulloch’s infamous Gyrocopter to fruition. Looking back, West said it was the years spent in a middle-management position that delighted him the most. He liked organizing a department and overseeing the workers and equipment.

After 40 years of employment with the McCulloch Corporation, West retired in 1995. He and wife Dena still live in their McCulloch home.

“I tried being in love with the lake and it failed,” West said. “I’d go to the lake fishing but everyone else was there. It was too crowded and they drank a lot. So, I quit the lake and went to the desert and mountains. There wasn’t nobody out there.”

“They’re the first group of people I’ve ever been associated with,” West said. “And, they’re some of the finest people I’ve known or ever met.”

2 Responses to “Working For The Man – Early West, An Authentic Havasuvian”