Zombies Crawl Main Street Pubs From One End To The Other 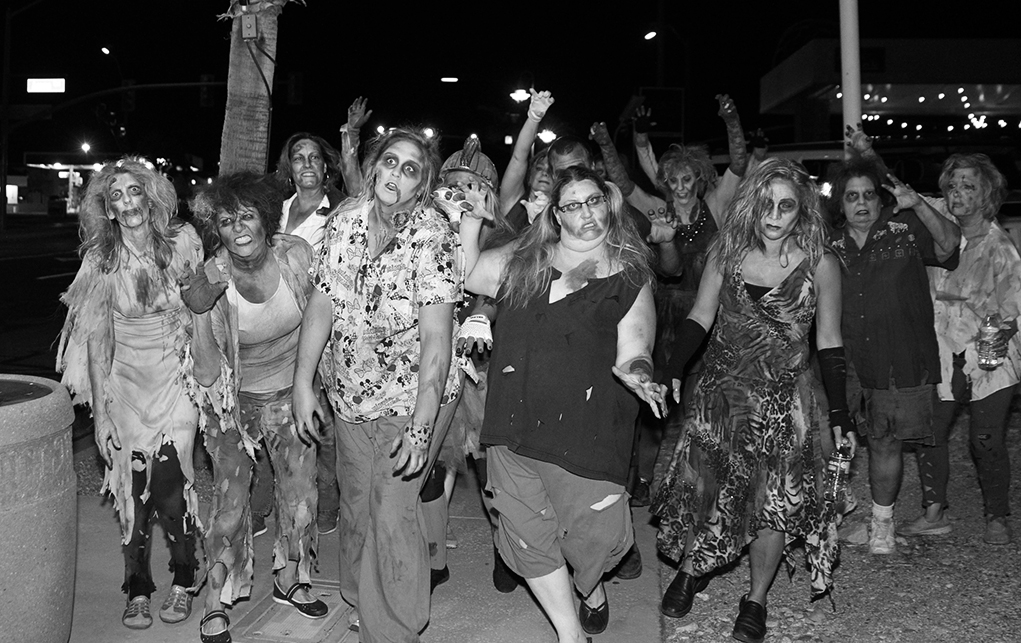 Friday night, the undead were the life of the party at the 7th annual Zombie Pub Crawl.

McCulloch Boulevard was flooded with blood, guts, drink and grub from 7 p.m. to 2 a.m., to celebrate the spirit of the dead. What better night to party from the grave than Friday the 13th?

As party zombies paraded the Main Street, bars and restaurants opened their doors for live entertainment, laughs and scares. 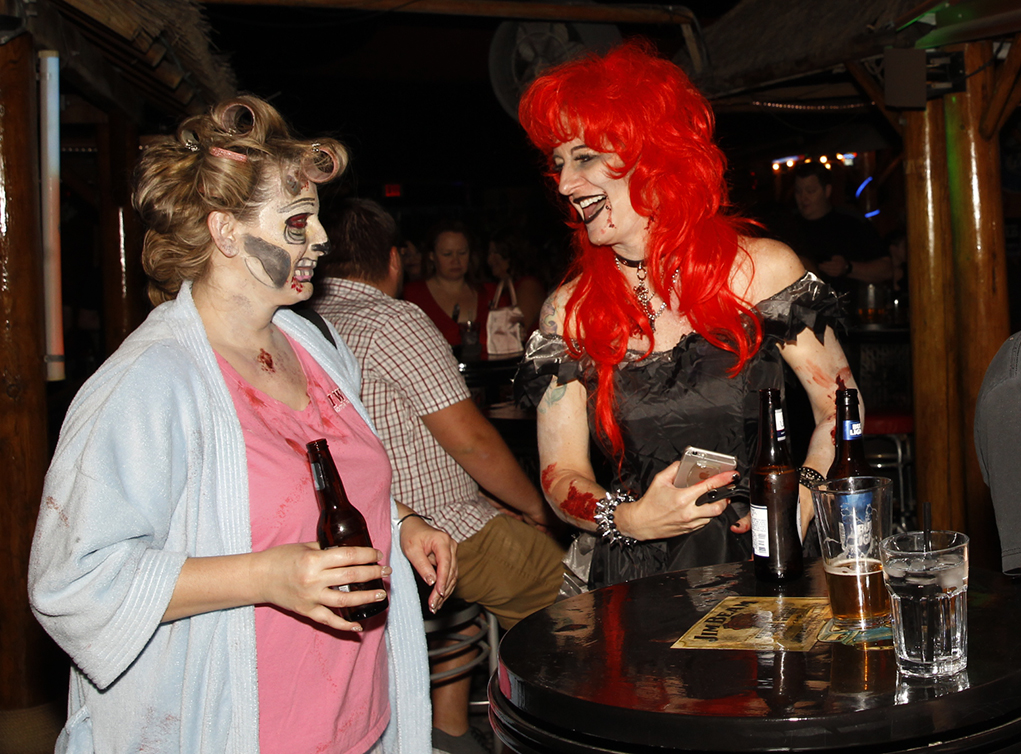 Though the warm-blooded are welcome, those who dressed as zombies were the main crowd after sunset. From Octane Wine Garage all the way down to the Flying X and even the off-main spots like Neon Lounge, Pennington’s Pub and the new Frank-N-Stein participated in the night of horror.

Live music started at 9 p.m. at Murderous Mckee’s Irish Pub from bands Guilty by Association, Apathy Circle, TV Tragedy and Circles in the Sky. Each band was decked out in wigs, suits, shredded shirts or bloodied up. The sound was heavy with punk influence, and the crowd ate it up like fresh brains.

“My favorite part is seeing the people at the end of the night turn into real zombies from a long night.” joked 23-year-old tattoo artist zombie Trevor Gobely.

Down at the Freaky Flying X, the Rowdy Johnson Band brought the dead cowboys and cowgirls back in their boots. 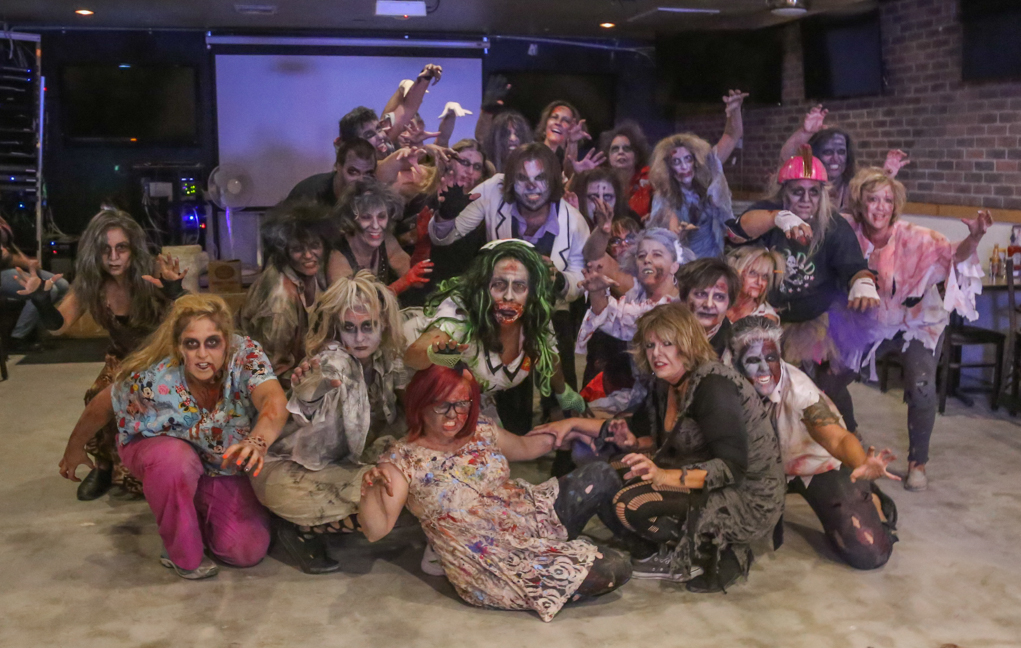 Dancers pose for a photo at MadDogs after a performance Friday evening during the Zombie Pub Crawl. Rick Powell/RiverScene

The zombie goers never saw what was coming next. Starting at 7:45 at the Flying X, a peculiar group of the undead crowded the dance floor. The country music suddenly switched to a groovy zombie tune and party goers were shocked to see … a zombie flash mob. The zombies boogied down to a routine two-months in the making to put on a wicked good time.

When the dance ended, the 32-member group lead by dance instructor Sandy Hickox crawled to the No Name Pub for an outdoor performance. Until 9:30, the group invaded all the pubs to share their demon dancing at BJ’s, Frank-N-Stein, Octane Wine Garage, back to the X, and finished up at Bad Dogs Bar and Grill. 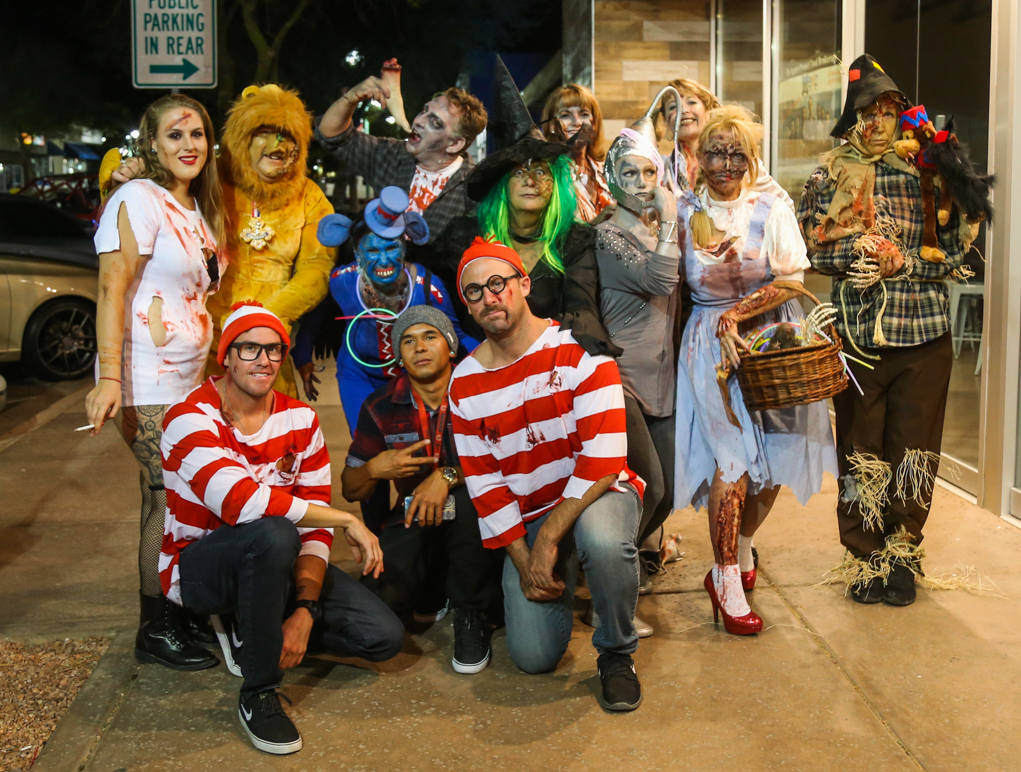 “The group has been practicing for the past couple months. It’s so much fun!” shared Kristy Harris, who helped coordinate the flash-mob’s crawl route. “We are hoping to do more events for the rest of the month.”

Started seven years ago, the Lake Havasu Zombie Pub Crawl has grown from a few zombie-goers to the whole graveyard. River Scene ran into the man that started it all, Zombie Nate.

“I just wanted to do something fun that no one had done before here,” Zombie Nate said. “I started by running around town handing out flyers. Once people heard about it, it became what it is now. I just wanted to see the other zombies have a great time”

The 7th annual Lake Havasu Zombie Pub Crawl was a monster mash of a party. 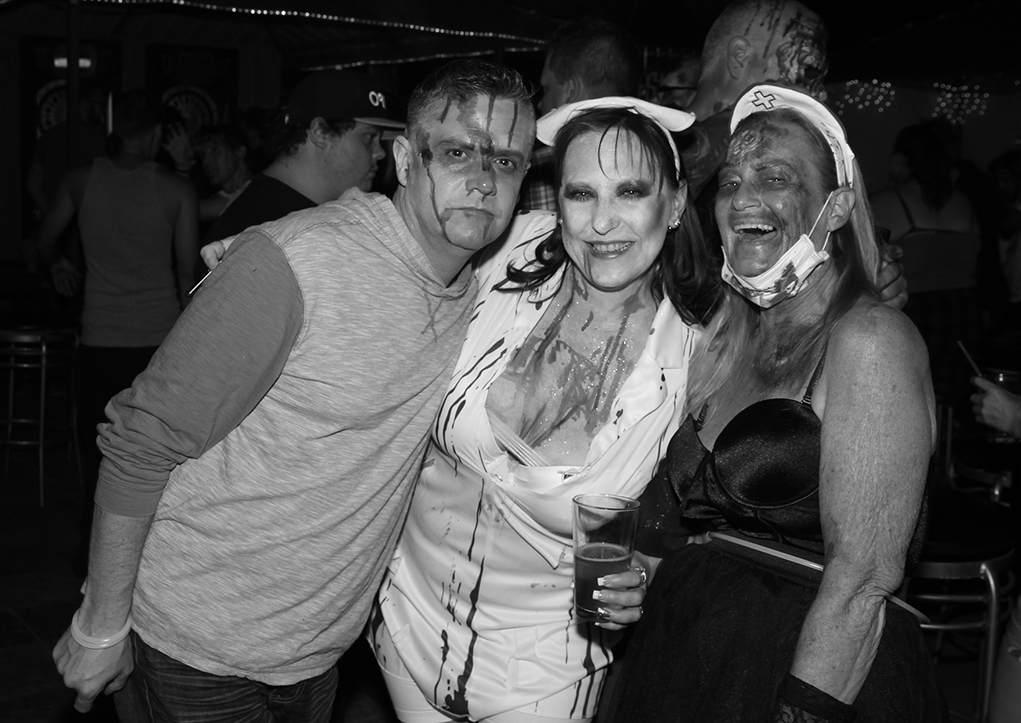 Participants in the Zombie Pub Crawl pose for a photo Friday evening at BJ’s. Jillian Danielson/RiverScene 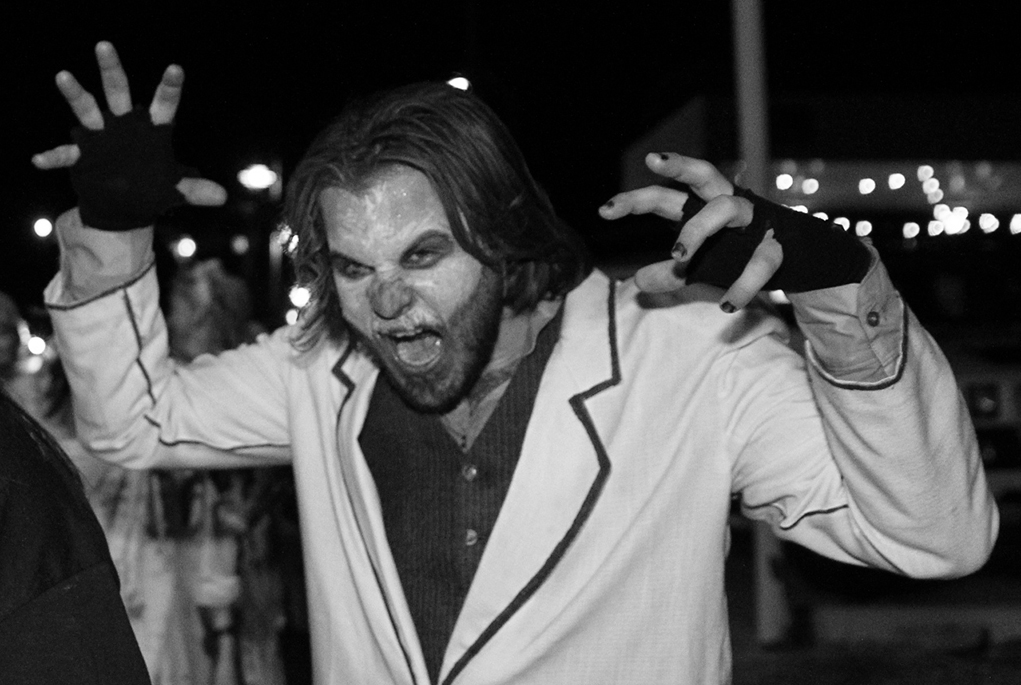 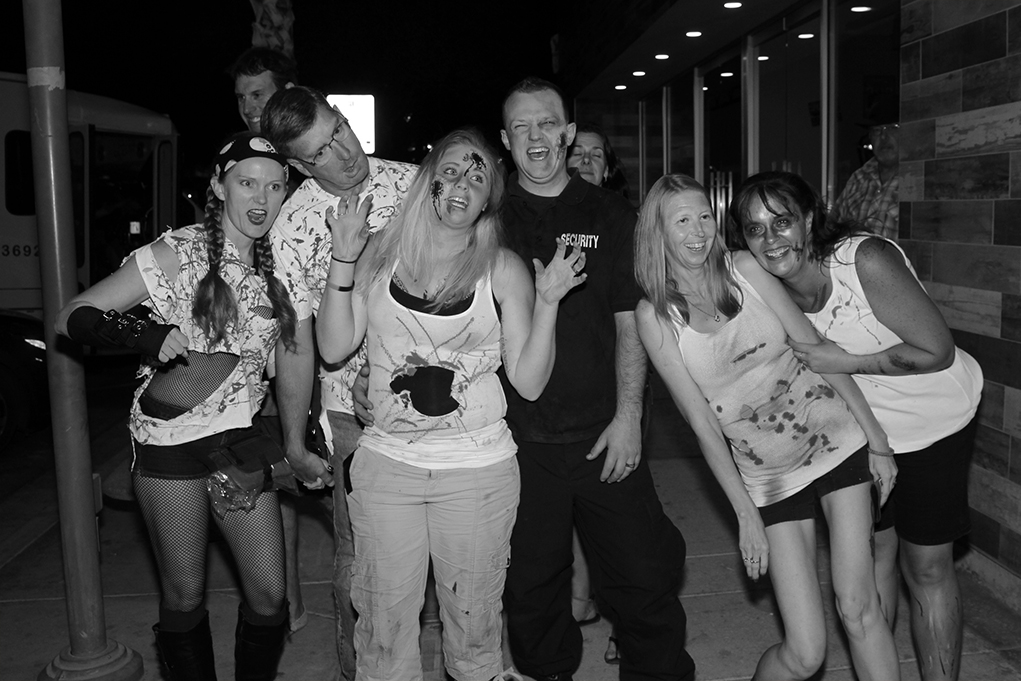 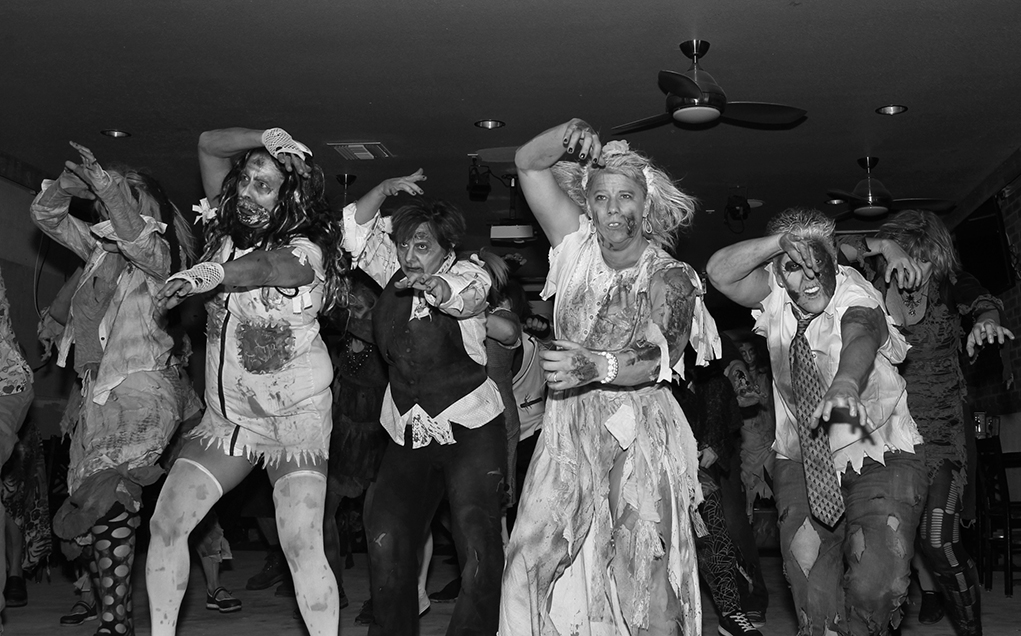 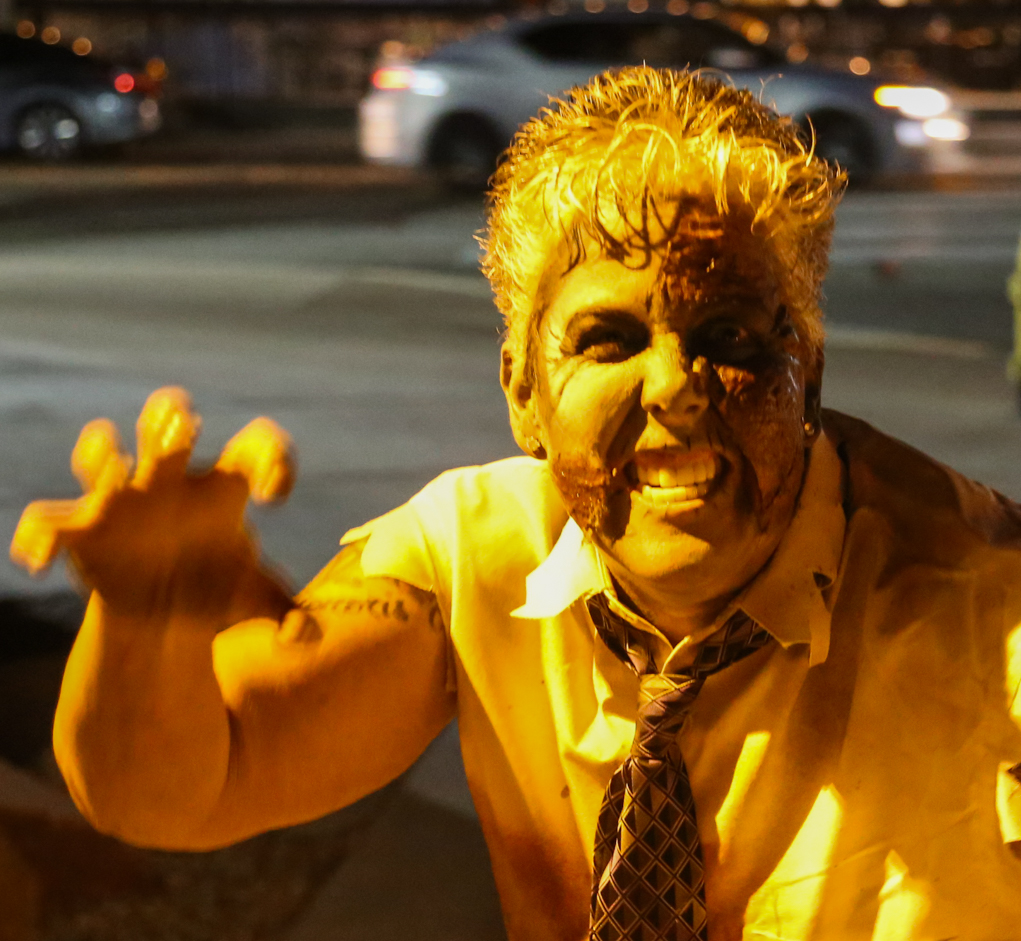 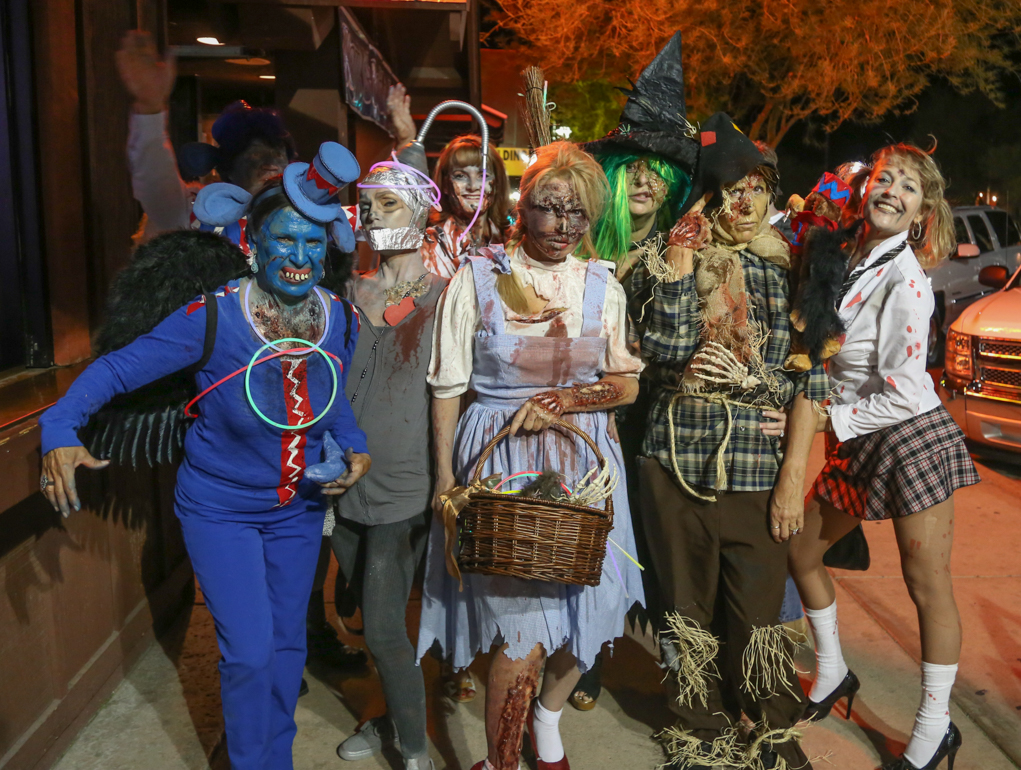