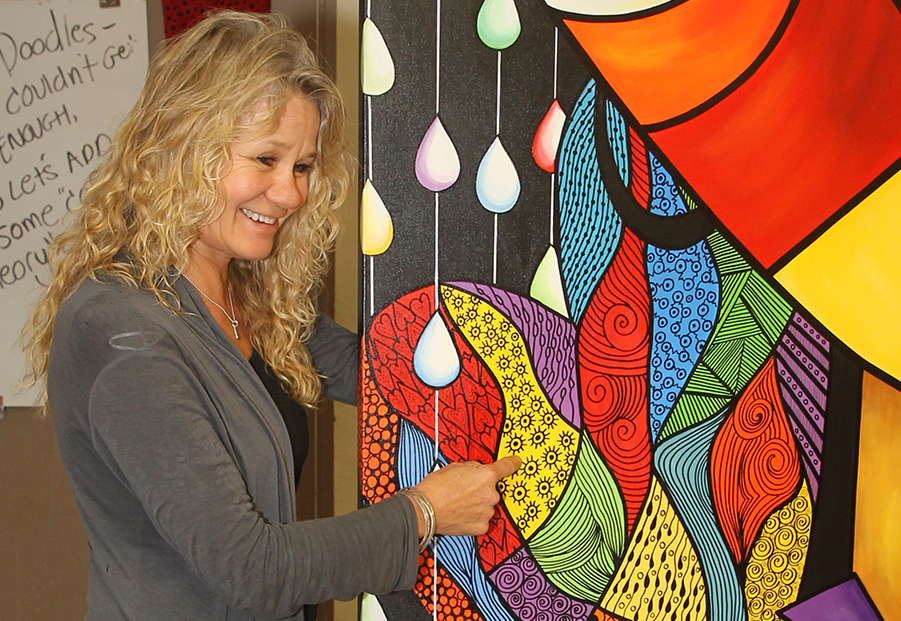 Lake Havasu City isn’t largely known as an artsy town, but there are quite a few creative minds in the city that focus on bettering their community. Local artist, teacher and 17-year resident, Pam Reinke, is one of those people. She lends her support to the community through philanthropy, charity and providing creative outlets for students. “At first I thought it was a great way to get your name out there and your work out there,” Reinke said of her charity work.

“Then it became more about the importance to contribute to the community in an artistic way. You’re exposing people to art.” Reinke has been teaching art at Telesis Preparatory Academy for three years. She originally approached the principal of the school with an idea for an art club. “It went from an art club, to a part-time job, to a full-time job in a matter of a half an hour, “ Reinke said. She was unsure if teaching was how she wanted to spend her time, but she soon saw the rewards of introducing young people to creative work and famous artists.

“It’s so exciting for me to see them get excited about their ability to do something that they didn’t think they could,” Reinke said.She also expressed the importance of getting her students involved with their community.“I like the kids to see that I do things for the community because they can see that art isn’t about making money all the time, it’s about how you can enhance your surroundings.” Reinke also explained why it’s important to keep the arts as part of a child’s education. 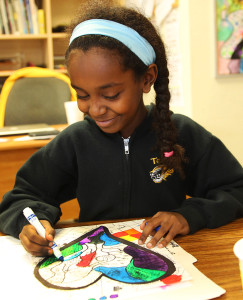 “I think if they learn how to express themselves in a positive way they might not express themselves in a negative way,” she said. “A lot of the kids who are creative are usually the trouble makers because they aren’t good at other things in school. I was that way. I wasn’t a trouble maker, but I wasn’t good at math. …I was good at art. If they (students) have one class that they feel good at, hopefully it will make a big difference in the rest of their education. It enhances education.”

When Reinke isn’t showing her students how to tap into their creativity, she is supporting good causes and donating her work to charity. She has donated art pieces to Telesis Preparatory Academy to help raise money for their creative arts program. She has also donated her artwork to Grace Arts Live for seven years in a row as well.

Reinke is a member of Havasu Leadership Development. She is excited about an upcoming project she will be volunteering on for the Havasu Abuse Victims Education Network (HAVEN). The group will improve the HAVEN Family Resource Center with the addition of a serenity garden. Reinke said the goal is to improve the overall appearance and to make for a more cheerful environment. Her job will be to paint a mural on the outside of the building. The project is very special to her and she will be recruiting students to take part.

“One of the reasons I said yes (to help with the project) is because it was for Leadership (Havasu Leadership Development) and it’s a great way for students to come paint on a wall, see what it means to work with other people and contribute to something that’s really, really important,” said Reinke.

Reinke said one of her greatest inspirations as a child was Dr. Seuss. Though her artistic style is very much her own, the influence of Dr. Seuss can definitely be seen in her work.
[pull_quote_left]“Dr. Seuss is really important to me because he did poetry and illustrations together,” said Reinke, who also depicts drawings and poetry in her work.[/pull_quote_left] Reinke said Vincent Van Gogh inspired her as an adult because he was very passionate about his art. Reinke is not only influenced by successful artists. She explained that her own work is inspirited just by everyday life.

“It almost feels like little messages come to me to help me get by. I also love color. Everything has to be really colorful,“ said Reinke. “I’m very inspired by color.” Reinke said her most recent work has been influenced by African art, which she appreciates for its simple and clean tribal lines.

“I always knew,” said Reinke of the realization that she belonged in the art world.
“I was really quiet and shy so that was a way I could express myself.“
The artist also knew early on that she wanted to have her own greeting card company, which was a dream that came true for her. The company was very successful for quite a long time, but seemed to slow down once E-cards became popular. 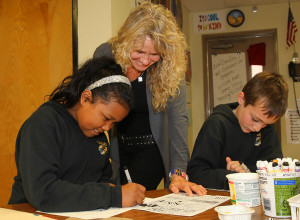 For 25 years, and before becoming a teacher, Reinke was a full time professional artist who traveled to art festivals. She flourished when it came to creating and selling her artwork at these events. Though she prospered, Reinke needed a break from traveling. It was at this time when it seemed as though another dream was coming true; a book deal was in the works. Unfortunately, the deal went bad and Reinke had to abandon that ambition. “Creatively, I was tapped out,“ Reinke said. Although it was a bad experience, Reinke’s future goals still include writing and publishing children’s books and she hopes to someday create animated movies about famous artists for young people.

She believes everyone can tap into their own special kind of creativity. “I honestly believe that anybody and everybody can draw,” she said. Reinke obtained a degree in art and a separate degree in education from the University Of Minnesota Duluth.

Do you know someone that would be an exemplary person for RiverScene Magazine to interview and write a story about?

We are looking for nominations for our weekly teacher community spotlight articles. Please use this form to submit your idea to us: Spotlight Nomination Form