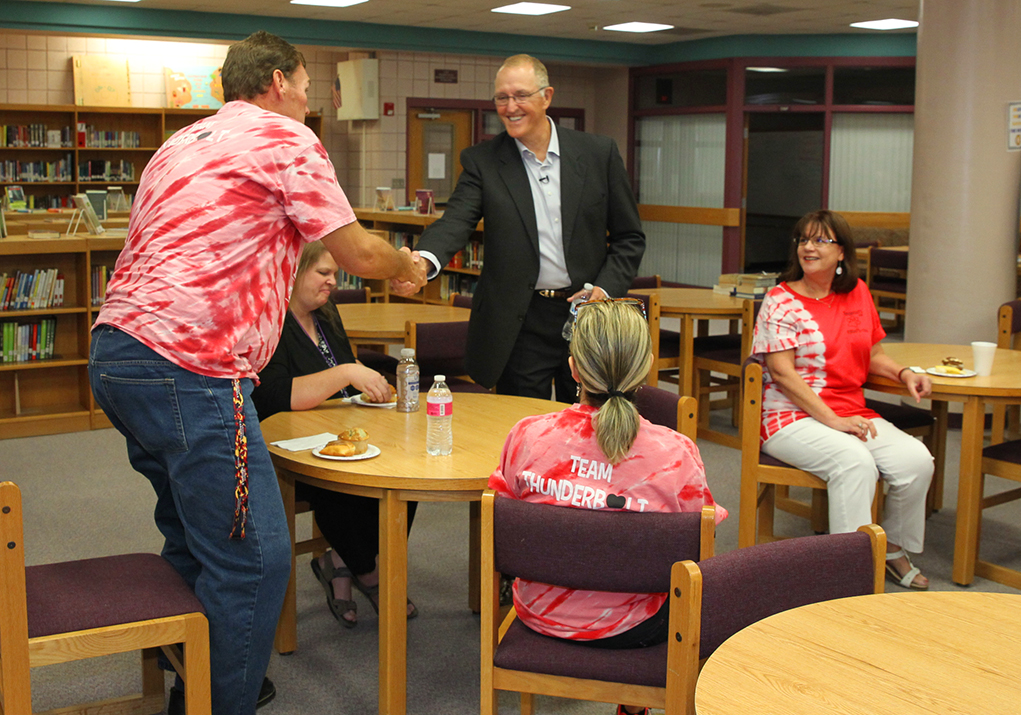 In December 2015, Thunderbolt Middle School was informed it had been nominated for the Capturing Kids’ HeartsTM Showcase Schools Award for the 2015-2016 school year by the Flippen Group.

In May, the school learned it had been named one of 11 Showcase Schools after being narrowed down from 600. 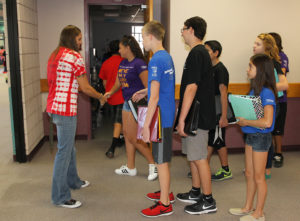 Thunderbolt students shake hands with their teacher as they enter the classroom Thursday morning. Jillian Danielson/RiverScene

After researching programs used by some of the nation’s most successful schools, Lake Havasu Unified District leaders chose to join the Flippen Group to bring Capturing Kids’ Hearts to the Thunderbolt campus.

Teachers and staff learned the processes needed to connect students with their peers and adults on campus, and to create classrooms that students are excited to enter and learn in every day. As a result of implementing Capturing Kids’ Hearts, Thunderbolt has enjoyed decreased discipline and increased attendance.

One of the rewards of landing in the top 11 was a visit from the program’s founder, Flip Flippen. And Thursday, Flippen fulfilled that promise with a visit to Thunderbolt. 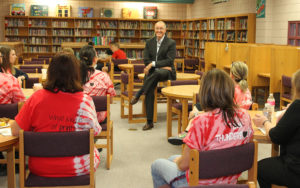 “We’re here today at Lake Havasu Thunderbolt because we’re celebrating the fact that out of 7,500 schools which is an immense number of schools all over the nation, our staff went out and researched them and visited them and picked 600 that we really think are really good,” Flippen said.

“From there, they came in and said, ‘We think we found the 11 best schools in the country,’” he said.

“Thunderbolt is one of the 11 which is absolutely phenomenal. It’s just amazing. And so we come here and here’s Miss Mulligan and all these kids and teachers and we started realizing this is just an amazing group of people – like everybody said – so it’s neat to be here and that’s what we’re doing here. We’re celebrating you guys.” Flippen said.

Thunderbolt principal Mary Jo Mulligan said it was an honor to welcome Flippen to the school’s campus. 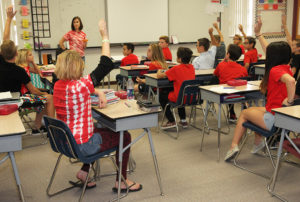 “Well, it’s quite an honor. It’s been several months since we knew that we had been honored with the Showcase School award and so just to know that Flip is here – out of all the places he could be – just to celebrate and honor us is … I don’t really have the words,” Mulligan said.

Mulligan said the Thunderbolt staff believes in everything it does with Capturing Kids Hearts.

Mulligan said Flippen spent the day, “visiting classrooms. He’ll be speaking to our teachers during lunchtimes and then we have a big assembly. We always have a quarterly assembly for students and today it’s going to look a little different and all the students will get to hear Flip so that will be an honor for them. So our final hour of the day will be a huge celebration to finalize our day with Flip and they get to hear from him.”