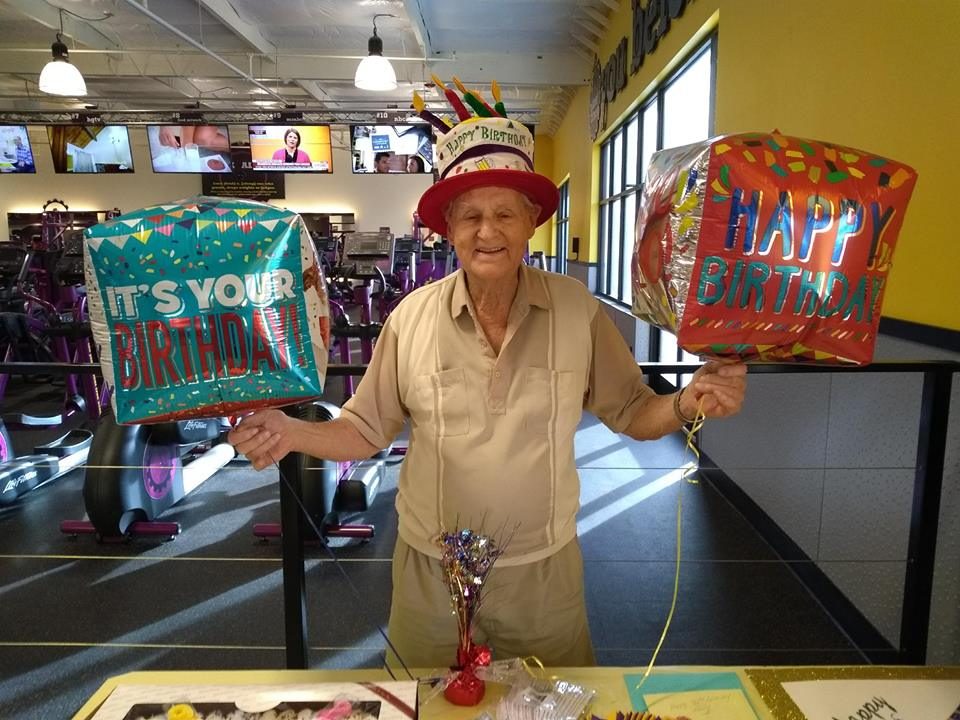 For many, the word “gym” sparks anxiety and reminds them of that bill we pay monthly and still never seem to use. For Larry “Twinkle Toes” Arsenault, the gym is a social experience. 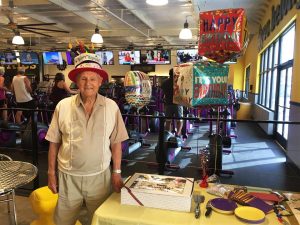 For at least twice a day, everyday, Arsenault visits Planet Fitness. He has been a member for more than  a year.

“He is motivational and an inspiration to all ages. On Valentine’s Day, the girls all wore red lisptick and smothered him with kisses. All the guys call him the chick magnet. The first thing I do every day is give Larry a hug and see his smile. He is so friendly and such a gentleman. I wish everyone could have a Larry in their life,” fellow member, Kat Cristano said.

His typical visit last around two hours where he mainly focuses on upper and lower body exercises. Even though he is a daily gym visitor, he was not always so dedicated to fitness. 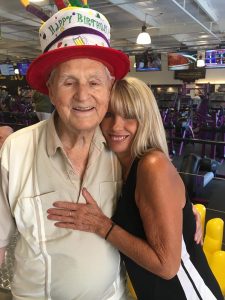 Larry gets some birthday love from friend and co-coordinator of the party Kat Christano. Grace Usher/RiverScene

Arsenault was in the industry of commercial air conditioning and refrigeration for more than 30 years. When he retired 32 years ago, he decided to take his wife all over the world. Some of the places they visited include France and Spain.

“I traveled a lot when I was younger. I was too young to join the Army so I joined the Merchant Marines. I wanted to take her travelling since I had been to so many places”

When not travelling, Arsenault spent time tending to his garden on his multi-acre home in California. He also enjoyed woodworking.

Originally, he came to Lake Havasu part-time as a snowbird. Now, he says he is a ‘sunbird’ as a full-time resident. He moved to Lake Havasu five years ago. He did not bring many of his hobbies with him so he went looking for a new way to spend his time. That is when he found the gym.

“I needed something to do, [I] meet people and talk to people.” 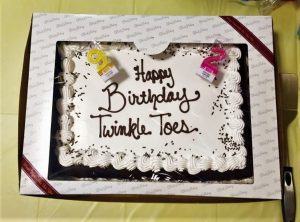 The group at Planet Fitness refers to Larry as, “Twinkle Toes,” however, he got the name many years before he began coming to the gym daily. The nickname was bestowed upon him after a late night at a bar called Happy Jacks in California.

“One day I drank too much and danced with the women. The next night when I went in, there was a gal sitting at the bar. She looked when I went in and turned back to the bartender and says, ‘Uh oh. Here comes Twinkle Toes!’”

The name stuck with  Arsenault and followed him to Planet Fitness. 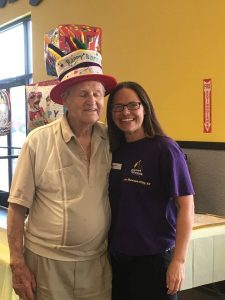 Larry Arsenault with his close friend and co-coordinaotr of the party, Daisy Krakruff. Courtesy: Katt Cristano

“He gave me a wooden banana hanger and my son and I went over to his house and we just fell in love with him. He showed us all of his medals and pictures and the rest is history. He became family,” shared employee and close friend, Daisy Karkruff. “He is 92 and fully of sound mind and body. He just amazes me”

Arsenault has gone on multiple trips with the Planet Fitness family to places like Oatman, the Hualapais, airshows and desert rides. 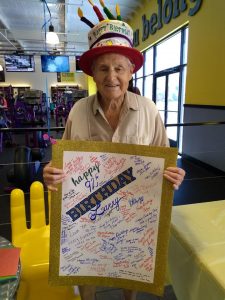 Twinkle Toes holds his over sized birthday card signed by all of his friends. Grace Usher/RiverScene