DreadKnot Is Bringing Only Good Vibes To Local Music Scene 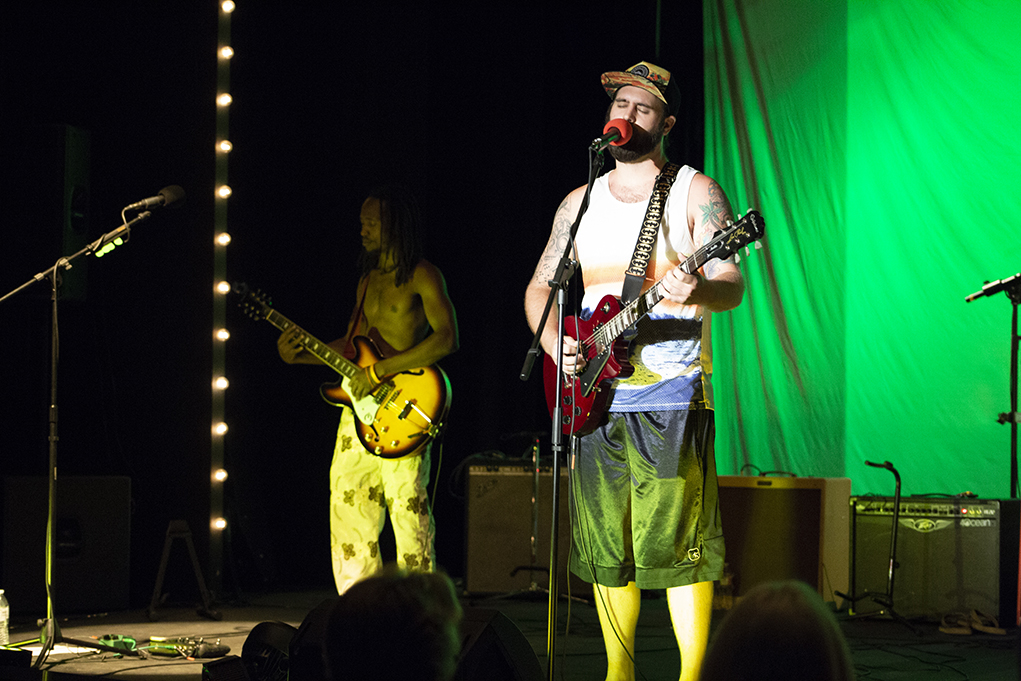 The local music scene is full of rock bands, but for a beach town, Lake Havasu City hasn’t quite hit the reggaeton vibration. That is all about to change with the latest group of EFFIN records to surface, DreadKnot.

Marshall, 26, was born in Flagstaff, but has lived in every major city in Arizona, calling Lake Havasu “home.” When not playing, he works for PB&J Water. He has been playing music for more than 10 years.

Bello, 28, was originally from Nigeria but moved to the United States nearly 10 years ago. He is a full-time musician, songwriter and sound engineer for EFFIN records. He has played guitar for seven years.

Town, 19, was born and raised in Lake Havasu. He spends his days with London Bridge Watercraft Rentals. He was 14 when he first picked up a guitar and transitioned to bass at 16.

Schendel, 28, grew up in Yucca Valley, Calif. He is an artist as well as a husband and father. He works for George Pest Control. Schendel is a multi-instrumental artist and has specifically played drums since age 12.

DreadKnot was a concept developed when Marshall and band manager, David Day, met at a barbecue. The two connected through their love of all music but primarily reggae. The two began to ponder the concept of starting a group. Bello worked with Day as a sound engineer and was introduced to Marshall. The two agreed to start a group.

Town and Marshall had played together in previous years in an ’80s Hair Metal and dance group. After a few months of disconnect, Marshall contacted Town and it was an instant “Yes!”

In the search for a drummer to complete the group, Marshall put an advertisement on Facebook. Schendel, who did not then know any of the members, replied to the ad and soon became the final member, completing DreadKnot.

“I saw the ad and thought, I guess I’ll go for it. It didn’t seem like they would find a good drummer so I stepped up,” Schendel said.

The name, DreadKnot, Marshall says, was a play on words.

“Dave and I shared epiphany. I was watching a documentary about old war ships, and one name they talked about was a Dreadnought. I researched and saw that no one had a name. I started to connect the word dread and how they are knotted.

“I called Dave up and we said the same word at the same time; that was it. We played with a couple names, but that was pretty much it right off the bat.”

The group identifies their sound as a cohesive blend of reggae, roots, ska and rock.

The group is comprised of quite diverse musical backgrounds of each member. Schendel is a fan of the metal scene. Town, the punk-style, Marshall, reggae and rock, and Bello, hip-hop and classic rock.

“Being from Nigeria, that influenced my kind of music. That’s why it’s interesting playing with them you know it’s kind of what we all bring to the table.” Bello said. 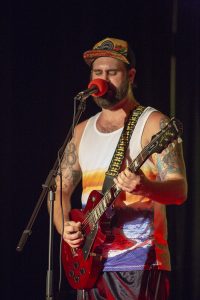 In the few months, the band has been together, they have played two shows. The first was at the Kokomo Havasu Bar and Grill. Just as any band’s initial breakout set, there were some turmoils but none they couldn’t combat.

“Kokomo’s none of my pedals would work so I just had to plug in straight to the amp and Justin had to do the same. Tanner had bass issues too. Since it was our first show we pulled it together and made it work,” shared Bello.

Each member has also been vital for the 1st Annual Heat Wave Music Festival that has occurred each weekend in August. DreadKnot played a set during the third weekend.

When not on stage, Bello helped with sound, and Town was a part of the security team, Marshall accompanied another local band, The Borrowers, and Schendel participated in the neighboring Art Party/Auction at Schlotzsky’s.

“It’s been a fun experience because we are so involved with Effin Records. Rasheed is always running music, but the rest of us will be security guards and go watch the show. I was born here and all my life I have been looking for a venue that has quality music. It’s nice to have something here that is different from what we usually have,” Town said.

The band’s set list is both cover songs and originals. Some covers they are known to pay are hits from artists such as Sublime, Radiohead, Damian Marley, and Rebelution. They currently have six finished originals and are working towards a completed EP to later transition into a full album.

DreadKnot is bringing Roots to the River, and is looking for the next spot to perform. If you are interested in hosting a performance from Lake Havasu’s only Reggae band, please contact Dave Day of EFFIN records.

Just want to enjoy the good vibes they bring? Check out the band page.